Fifteen years before nine women stepped forward to accuse drum corps leader George Hopkins of sexual abuse, a longtime critic says he warned the director of the activity's governing body about questionable behavior by Hopkins, but was dismissed.

The critic, Stuart Evan Rice, said this week that he told Dan Acheson, executive director of Drum Corps International (DCI), in 2003 that there were rumors Hopkins had sexual relations with a member of his Allentown-based corps, the Cadets.

Acheson on Thursday said he had no recollection of the conversation.

In response, Rice, 53, drew attention to an online forum where there remain posts by Rice from 2003 describing a call between the two, including Acheson's seemingly dismissive response.

"He maintained that DCI has no jurisdiction over sexual improprieties within the organizations it governs … and that those incidents should be resolved through the member corps," Rice wrote in July 2003.

As executive director and CEO of DCI, based in Indianapolis, Acheson has been at the forefront of responding to the crisis surrounding Hopkins and the renowned Cadets drum and bugle corps. Last week, the Inquirer and Daily News published an investigation in which the nine women accused Hopkins of sexual harassment or assault, in stories that span four decades. Two more women have since come forward.

Hopkins quickly resigned, followed by the 10-member board of Youth Education in the Arts, the nonprofit that oversees the Cadets. Hopkins' replacement as CEO of the nonprofit, Sean King, was suspended Thursday after one of Hopkins' accusers said she told King years ago that Hopkins was harassing her and King did nothing.

Responding to the initial article detailing the women's stories, DCI said the organization had been unaware of the "specific allegations highlighted" and would conduct an internal review to determine if any staff were aware of the accusations and failed to report them.

This week, before the old forum posts surfaced, Acheson said that review was nearly complete and had not uncovered anything that would call for a deeper investigation.

Acheson, whose salary is $114,000, has led Drum Corps International for 23 years. The organization sanctions dozens of drum corps – most in the United States but some international – and hosts more than 100 competitions with thousands of participants annually. Corps members, ranging in age from 16 to 22, spend their summers traveling with their corps, performing 12-minute numbers that combine marching, music, and dance.

Hopkins was a fixture in drum corps for four decades. At the time that Rice lodged his allegations against Hopkins, Hopkins was a member of the Drum Corps International board of directors.

Rice, a former member of a drum corps who went on to conduct research on the activity, posted about Hopkins in 2003 on a forum called "Rec Arts Marching Drumcorps," or RAMD to its hundreds of members. At its peak the forum was among the largest in the drum corps world. Active from the early 1990s to the mid-2000s, its traffic slowed in recent years. It is now largely defunct. 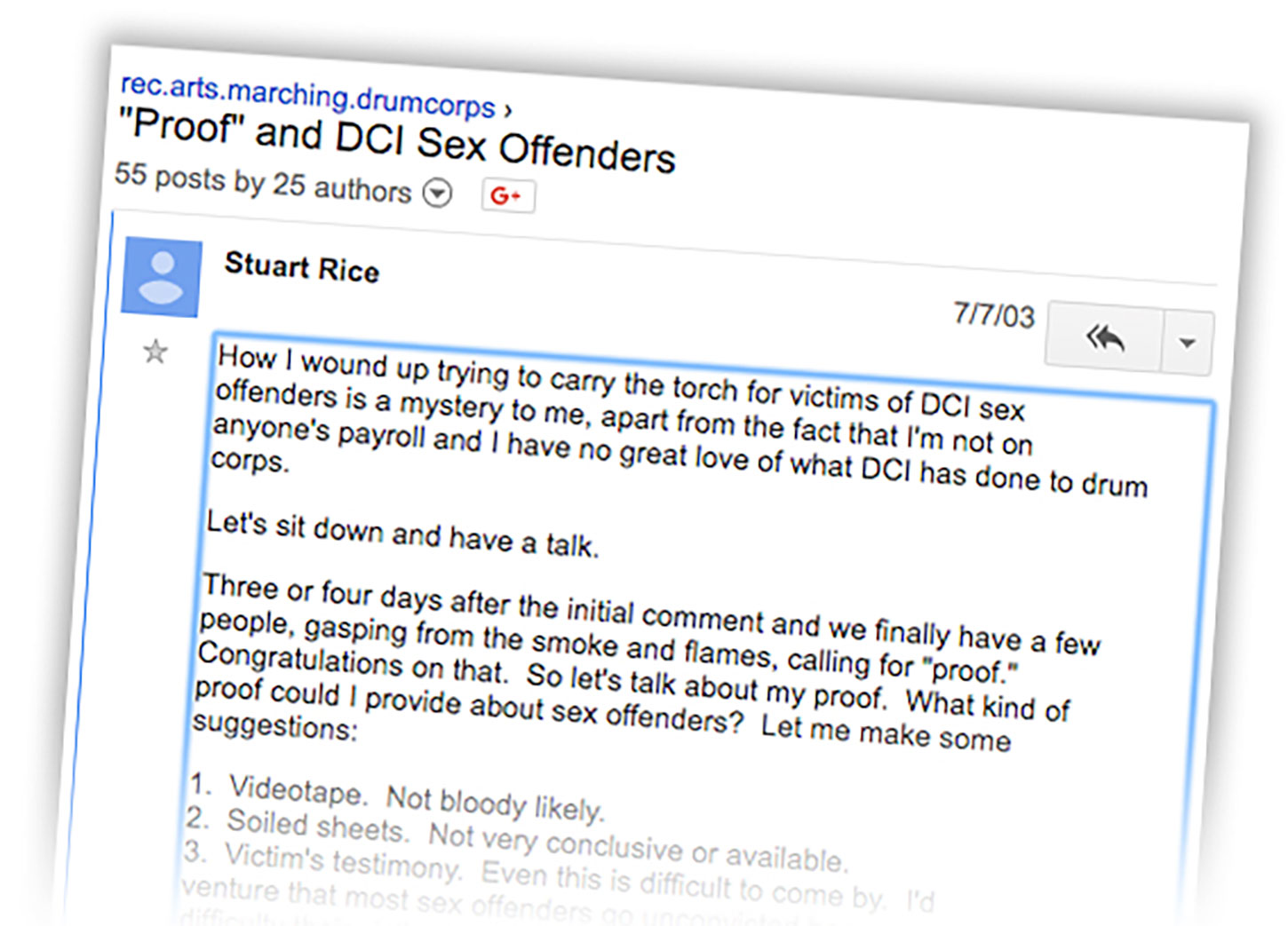 A Warning From 15 Years Ago

In 2003, Stuart Evan Rice, a critic of drum corps leadership, posted on an Internet forum that he heard that George Hopkins had sex with corps members. He also wrote that he warned the director of Drum Corps International, Dan Acheson, about his suspicions. Acheson says he does not recall the warning.
Here are excerpts from Rice’s posts. The name of an additional DCI staffer mentioned by Rice has been redacted.

“In the process of my getting to know these people, their knowledge and experience, I have learned that some individuals in the DCI hierarchy are sex offenders, which was not a surprise to me (virtually all youth activities experience problems like this at one time or another).
“In other words, DCI staff (in this case, [name redacted] and George Hopkins) have had sex with members of certain junior corps.”

“I had a pleasant conversation with Dan Acheson on the phone a few minutes ago about DCI’s sex offenders. He mentioned that he would be happy to speak with any victims who may contact him. He also said he would contact authorities, if appropriate. However, he also suggest that having my sources contact him (or any sources, other than victims) would not be productive.
“He maintained that DCI has no jurisdiction over sexual improprieties with the organizations it governs (I doubt that would be the case for DCI’s own employees, i.e. [name redacted]), and that those incidents should be resolved through the corps involved. As is so rarely the case in DCI, it seems justice rests in the hands of the victims here.”

“It has been suggested that I talk with Dan Acheson, child protection agencies, and the police about reporting what my sources have informed me regarding sex offenders in drum corps. I have left no stone unturned. In one case, the statute of limitations has expired. In another, I was told the police could do nothing.
“Dan Acheson, as I mentioned, said he would do nothing unless approached by victims themselves. … what can be done? The powers that be have made it clear: the matter is in the hands of the victims. If the victims choose to do nothing about problems like this in drum corps, nothing will be done.”

On July 7, 2003, Rice wrote in the forum that Hopkins had had sex with a corps member. About a dozen other members of the forum chimed in, many attacking Rice and demanding proof.

"Dude, if you've got the goods on Hopkins, why not take it to the proper authorities?" one member asked.

The next day, he posted about the call, writing that Acheson told him he would be happy to speak directly with any victims.

"However, he also suggest that having my sources contact him (or any sources, other than victims) would not be productive," Rice wrote.

Rice did not specifically mention Hopkins in that day's post.

A few days later Rice again referenced the call on the forum.

"Dan Acheson, as I mentioned, said he would do nothing unless approached by victims," he wrote.

Rice, who lives in Provo, Utah, and has not been actively involved in the drum corps community for several years, this week said that at the time, he had heard secondhand that Hopkins had sex with a member of the Cadets. He said Acheson asked for evidence, but he had none to offer.

"I called him … and said 'Dan, you know, there's this going on with George Hopkins. Are you guys going to do anything about it?' And he said, 'Do you have any proof?' And I said, 'No, just what I've heard.' "

Asked about the conversation, Acheson said: "I have no recollection of that call."

He said, however, that the response Rice attributed to him seemed reasonable, given that Rice had not provided specifics. He also questioned whether Rice actually mentioned Hopkins, which Rice said he did.

"I don't think there was any kind of a detailed conversation about specific incidents, and with whom," Acheson said. "I can't imagine that would have been the case, because I would have reacted. I would have followed up that up with someone."

Asked whether he had any obligation to proactively investigate, Acheson said he couldn't speculate on what "I felt at the time, what I felt compelled to do or not with that information."

He said he had no recollection of confronting Hopkins about Rice's allegations.