Neighbors call it Nightmare on Monroe Street. For the last six years, resident on the tiny 100 block of Monroe Street have had flooding, a sinking street, broken sewer pipes and now a decrepit street. The Philadelphia Water Department says all the issues were caused by several broken sewer laterals, which are the responsibility of the property owners. The residents, however, believe there is a much larger issue underneath their street.

David Becker squatted next to the concrete curb in front of his Queen Village home and propped a 10-inch stack of  Lego blocks against the sidewalk.

"You can see, it's probably sunk a little bit more," Becker said, putting his finger between the top of the curb in the middle of the 100 block of Monroe Street and the top of the Lego tower.

Becker's Lego pile keeps growing.  The technology CEO and neighborhood activist has been using the plastic toys since last year to convince skeptics that Monroe Street continues to sink. The 6½-foot wide street has been dug up more than a dozen times within five years as 12 out of 30 lateral sewer lines have failed and been replaced, some twice.

Residents are fed up after a six-year feud with the Philadelphia Water Department. City officials say the 100 block of Monroe has just been unfortunate with broken laterals, which connect the sewer to homes. But neighbors say there is more going on below: How can so many pipes fail at once? And how could that cause the constant collapsing and sinking of their street?

They want a permanent fix.

Becker uses the Legos and animated pointing to argue that it's not normal, or safe, that one small block has a 10-inch curb in one spot and a 3-inch curb in another (the standard is 6 inches). And water pools in the street, creating what neighbors call Lake Monroe. One resident slipped and fell on the frozen water while pregnant a few years ago. Several times, trash trucks have gotten stuck or blown their tires on the rough road.

Last time work was done on Monroe, resident Elizabeth May stuck a measuring stick down an opening. It was 13 inches until she hit any dirt, May said.

"I took a picture and said 'Hi, I think there's a problem here,'" she said of her note to the Water Department describing the void.

Hundreds of emails have flown between residents and the Water Department. The two sides have also had some summit meetings, and the local city councilman has toured the street. Yet nothing is resolved.

Becker grew so frustrated that in May he launched PhillyFail.org, a website where he has chronicled the street's ongoing saga with the Water and Streets Departments. He called it the Nightmare on Monroe Street.

Water Commissioner Deborah McCarty thinks the title is a little much. She said the department has tried to be fair and reasonable with the 100 block of Monroe, granting extensions of time to repair lateral lines, offering loans to pay for those repairs, and even launching a $10,000 study that looked underneath the street with X-ray-like tools. 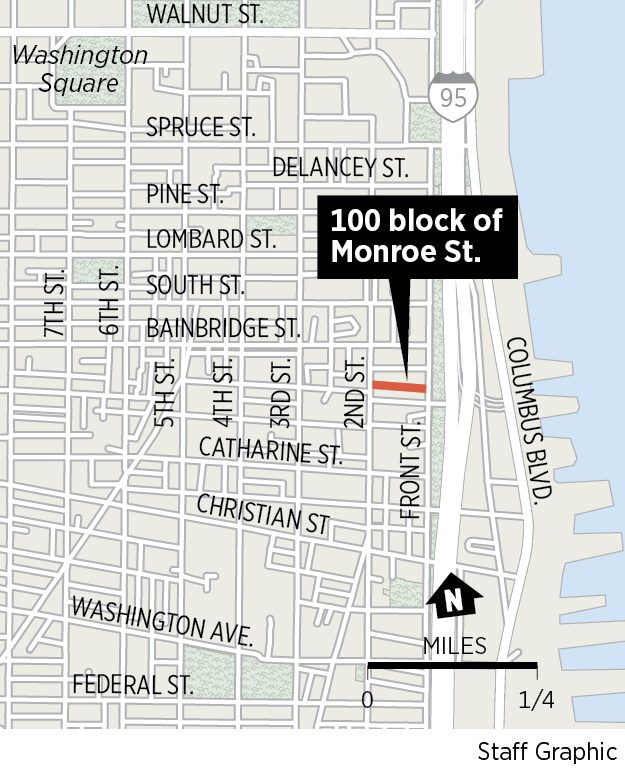 “It does make sense to me that a few [laterals] could fail at the same time. It’s not unusual throughout the city,” McCarty said, noting that there is a lot of old underground infrastructure. The main sewer and lateral lines underneath Monroe were first installed in the 1890s, for example. In 1991, the sewer line was replaced, but not the laterals, since those are property owners’ responsibility, McCarty said.

Some of the laterals might still be the clay originals.

In the last year, the Water Department issued more than 5,000 notices for property owners to replace water or sewer infrastructure linking them to city service lines. Of those, 277 were for broken sewer laterals, which connect a sewer to a property's curb trap. Often the cause is that old clay laterals have reached the end of their "useful life," Mark Waas, the city's chief water transport engineer, said.

Fixing sewer laterals costs anywhere from a few thousand dollars to more than $10,000, depending on the length of pipe needed. If the break is caused by city infrastructure, the Water Department pays.

The problems on Monroe started in 2010 when JP Lutz and some of his neighbors closest to Second Street had sewage backups in their basements.

Lutz's plumber told him that the lateral wasn't properly connected. He paid for a new one and so did some others, he said.

Then, in 2012, a trash truck cracked the street open, creating a ditch. That led to the Water Department's ordering several residents, including Lutz, to fix broken laterals again.

Lutz said Monroe Street was in excavation mode for about a year, while residents fixed their pipes and the city came to backfill and repave the street.

Fast forward to 2017. Another trash truck fell through, causing the Water Department to issue more defect notices for properties farther down the block.That's when neighbors really lost patience.

"We're arguing it's something much bigger. Something else is causing the street to sink," Lutz said.

The engineering report paid for by the city pointed to poor compaction of backfill, stormwater runoff, collapse of abandoned utilities, and degradation of historical fill materials as causes of Monroe Street's problems.

McCarty said the report was not conclusive, however. So the Streets Department will do an "exploratory dig" on Monday to investigate the identified voids.

The department, however, still believes that leaking old laterals with cracks eroded soil above and around them, creating voids. It determined that the sewer and water main are not defective.

"I hope we found all the problems and that life can go on," McCarty said. "But there's no guarantees. It's old infrastructure. Tomorrow one of those other laterals that hasn't been replaced in 2012 or 2018 could go."

That's why neighbors asked the city for a full reconstruction of the street, but officials balked at the $750,000 cost.

Becker said that in total, the block has spent $60,000 on lateral repairs, and if there is no comprehensive fix, the cost will continue to rise.