Richard DeAgazio was already seated for dinner, on the Mar-a-Lago Club's terrace, when President Trump entered with the Prime Minister of Japan on Saturday night. The crowd — mostly paying members of Trump's private oceanfront club in Palm Beach, Fla. — stood to applaud. The president's party sat about six tables away.

Then, DeAgazio — a retired investor who joined Mar-a-Lago three months ago — got a text from a friend. North Korea had just test-fired a ballistic missile, which it claimed could carry a nuclear warhead. DeAgazio looked over at the president's table.

"That's when I saw things changing, you know," DeAgazio recalled in a telephone interview with the Washington Post on Monday. He said a group of staffers surrounded the two world leaders: "The prime minister's staff sort of surrounded him, and they had a little pow-wow."

What was happening — as first reported by CNN —was an extraordinary moment, as Trump and Abe turned their dinner table into an open-air situation room. Aides and translators surrounded the two leaders as other diners chatted and gawked around them, with staffers using the flashlights on their cellphones to illuminate documents on the darkened outdoor terrace.

The scene of their discussion, Trump's club, has been called "The Winter White House" by the president's aides. But it is very different than the actual White House, where security is tight and people coming in are tightly screened. Trump's club, by contrast, has hundreds of paying members who come and go, and it can be rented out for huge galas and other events open to non-members. On the night of the North Korea launch, for instance, there was a wedding reception going on: CNN reported that Trump dropped by, with Abe in tow. 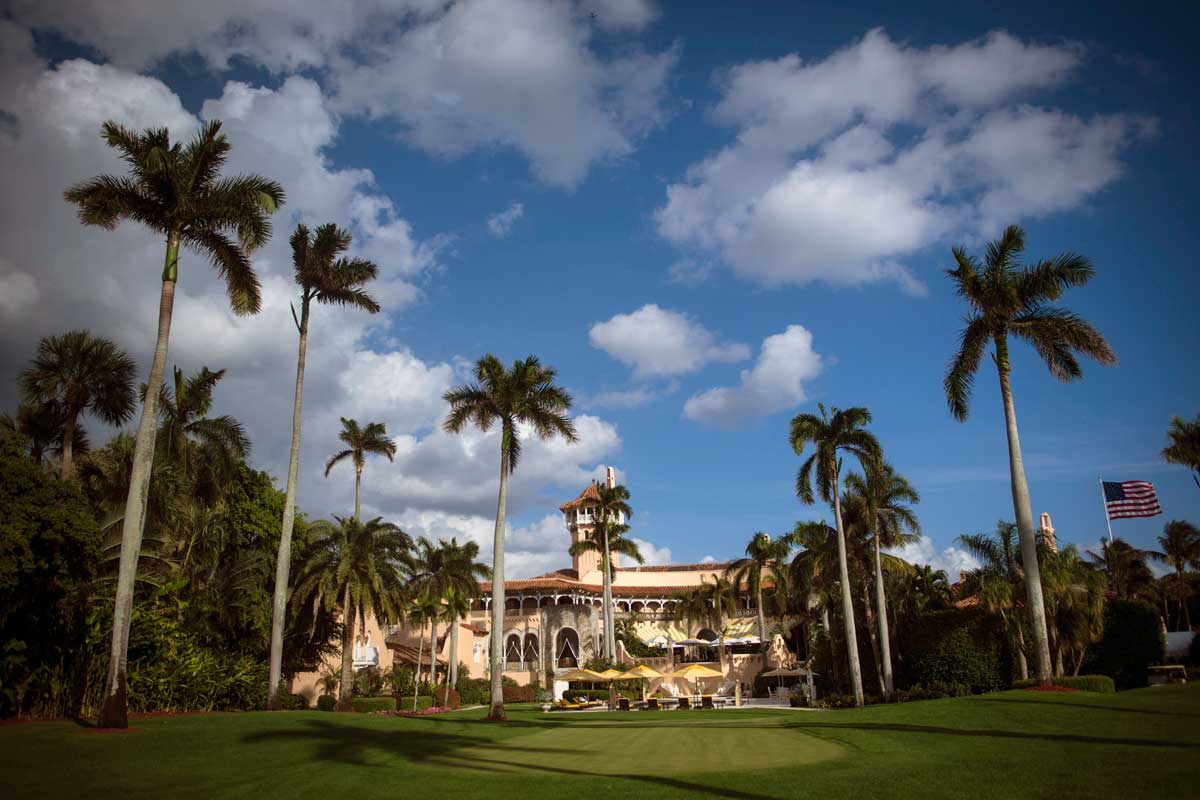 JaBIN BOTSFORD / Washington Post
Membership at the Mar-a-Lago Club now requires a $200,000 initiation fee — a fee that increased by $100,000 after Donald Trump was elected.

As a Mar-a-Lago member, DeAgazio already had extraordinary access to a president that day. He had earlier snapped pictures of Trump and Abe golfing, and of the president and White House strategist Stephen K. Bannon schmoozing guests.

Now, as a national-security crisis broke out in front of him, DeAgazio continued snapping pictures — and posting them on Facebook.

"The President receiving the news about the Missile incident from North Korea on Japan with the Prime Minister sitting next to him," DeAgazio wrote as the caption for a photo he posted on Facebook at 9:07 p.m. Eastern time on Saturday.

Later, he posted other photos of Trump and Abe's discussion, including some that seemed to have been taken from just a few feet away. Those photos have now been seen around the world, providing photographic proof of this unusual moment.

"HOLY MOLY !!!" De Agazio wrote later, when he posted those closer-up photos. "It was fascinating to watch the flurry of activity at dinner when the news came that North Korea had launched a missile in the direction of Japan. The Prime Minister Abe of Japan huddles with his staff and the President is on the phone with Washington DC. the two world leaders then conferred and then went into another room for hastily arranged press conference. Wow.....the center of the action!!!"

DeAgazio told the Post that, after Trump and Abe had spoken for a few minutes, they left the open terrace and spent about 10 minutes in private before conducting a joint press conference at about 10:30 p.m. Eastern time. Later, he said that Trump and first lady Melania Trump had returned to listen to music on the terrace — which faces the Intracoastal Waterway — and shake hands and speak with club members.

DeAgazio said he'd been impressed with how the president had handled the situation.

"There wasn't any panicked look. Most of the people [on the terrace] didn't even realize what was happening," DeAgazio said. "I thought he handled it very calmly, and very presidentially."

The two leaders could have discussed classified documents within earshot of waiters and club patrons. Those cellphones-turned-flashlights might also have been a problem: if one of them had been hacked by a foreign power, the phone's camera could have provided a view of what the documents said.

But DeAgazio, for one, said he was impressed that Trump had not gotten up from the table immediately, to seek a more private (and better-lit) place for his discussion with Abe.

"He chooses to be out on the terrace, with the members. It just shows that he's a man of the people," DeAgazio said.

DeAgazio also posted photos of himself with a man that he identified as the military member who carries the "football" that would allow President Trump to launch a nuclear attack. In that Facebook post, DeAgazio described how "the football" functions, but said that the military member did not divulge that information to him.

"I looked it up" on Wikipedia, DeAgazio said. "He didn't say anything to me."

Was DeAgazio worried about the national-security implications of Trump's al-fresco discussion with Abe? He was not. He said he was sure they had not been overheard.

"You don't hear anything. You can't hear," DeAgazio said, because of the background music and other diners' chatter. "I mean, I can barely hear what's going on at my table."