Even in loss, the Philadelphia region's Croatians were proud of the mighty effort by their never-say-die team.

Their team may not have won, but for the Croatian Philadelphians who gathered for a watch party at Chickie's and Pete's in South Philadelphia on Sunday morning, just witnessing their team come so far — in the month of the tournament, in 26 years of independence as a nation — was enough.

"Second in the world ain't bad," said Steve Rukavina, the president of the National Federation of Croatian Americans Cultural Foundation, at the match's end, with France beating Croatia 4-2.

But these fans had higher hopes when they stood around a long table near the bar shortly before 11 a.m. Sunday. Hands on their hearts, they sang along with the Croatian national anthem as their team prepared to take the field for the final match of the 2018 World Cup.

"It's going to be an emotional day," Tommi Mischell, 50, an interior designer and singer-songwriter, who grew up in Trogir and now lives in Washington Township, said just before the game started, tears in her eyes.

Like many red-and-white-clad fans, Mischell remembers the Croatian War of Independence, which raged from 1991 until 1995, when she watches her team play. During the war, Mischell traveled around the country, entertaining Croatian troops.

Croatia's soccer performance this year — during which they have repeatedly come back from behind, and played well into overtime — shows that "we are filled with the divine power of love, love of the patria and the country," she said.

About 1.5 million Croatians live in the United States. Most are concentrated in Pittsburgh, Cleveland, Chicago, Los Angeles, and New York.

In Philadelphia, the community is much smaller: about 900 Philadelphians identified as Croatian in the latest census survey. 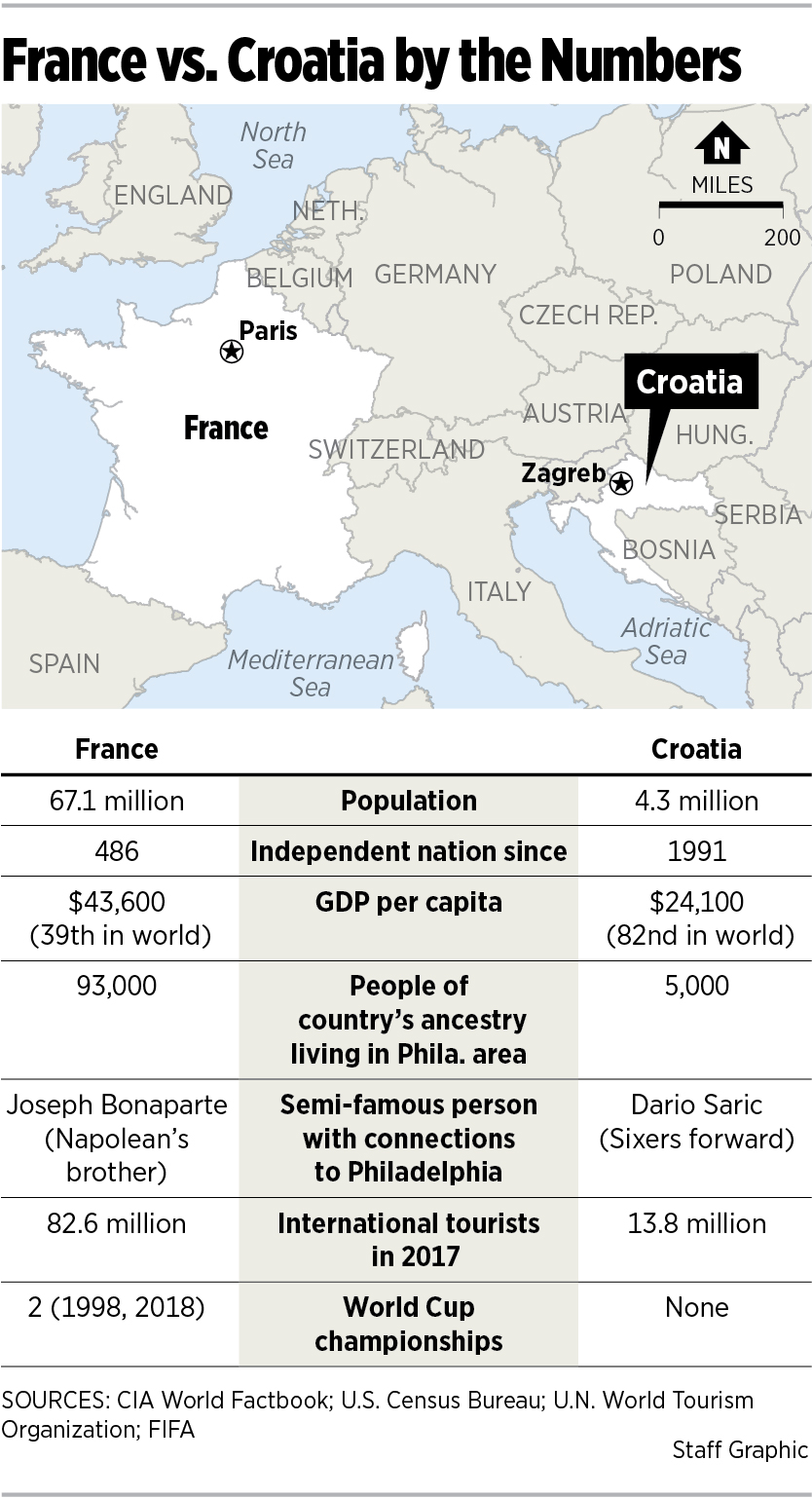 It’s this small-but-mighty ethos that’s motivating so many Croatian fans’ ardor this tournament. With just 4.3 million people, Croatia is the smallest country to make it to the World Cup finals since Uruguay in 1950.

That's what makes this team scrappy, said Rukavina, who organized the watch party. "It's been a fairy tale to watch this team that will never give up."

"Even when they're tired, you think they are exhausted, but they play like there's no tomorrow," Mischell agreed.

This group of fans began gathering at the bar shortly after the doors opened at 10 a.m. By kickoff, they had beers and tea, and other viewers began to filter into the restaurant. Some ordered crab legs and beers. Others sat with their eyes glued to the television screens, baskets of fries untouched before them.

A half-hour into the match, the skies darkened outside and the first drops of rain began to fall on Philadelphia. Inside, roaring fans leaped to their feet as Ivan Perisic landed Croatia's first goal of the match.

According to the bookies, the odds were in France's favor. But Nick Kacic-Miosic, a sculptor and Mischell's husband, had no doubt that Croatia would win.

Forty minutes in, he sat silently, hands clasped before his mouth, as France's Antoine Griezmann brought the score to 2-1 in France's favor — a score that maintained into halftime.

This is the most important match in the Croatian team's short history. In its first World Cup, in 1998, the squad made it to the semifinals, a mere six years after being officially recognized as a team.

Many of the players on this year's team grew up under the shadow of the bloody Yugoslav Wars, which raged throughout the 1990s.

"These players wear that history on their shoulders," said Rukavina.

The team's captain, midfielder Luka Modric, was 6 years old when his grandfather was shot to death by members of a Serbian militia. Now he plays for Real Madrid and is considered one of the best footballers in the world.

Fellow midfielder Ivan Rakitic grew up in Switzerland after his parents left Croatia at the onset of the War of Independence. Defender Dejan Lovren spent much of his childhood in Germany as a refugee.

That troubled recent history means Croatia is used to being the underdog, said Rukavina. Achieving independence "was a bigger upset than beating France," he said.

And of course, Philadelphians are no strangers to being underestimated, either.

"It would be two wins in one year," said Mischell. "My Eagles got an award for Philly, and I'm hoping Croatia can do the same for my country."

France scored its third goal of the match in minute 60, to the cheers of many in the rapidly filling restaurant — and the grim silence of the Croatian table. Superstar French striker Kylian Mbappe scored another five minutes later, bringing the score to 4-1 for France.

Throughout this tournament, Croatia has repeatedly come from behind — first against Denmark, then in the quarterfinals against Russia, and then, finally, last week, in a stunning extra-time goal against England, which clinched its spot in the finals.

So these Croatian fans were exuberant, but not completely surprised, when Mario Mandzukic sunk a goal in Minute 68.

In some ways, the end result doesn't entirely matter, said Ante-Tony Sevo, 57. Bedecked in a Modric jersey (the only Croatian jersey he could find at the Cherry Hill Mall, he said), a checkered hat, and red checkered Van sneakers (a coincidence, found at Foot Locker), he said just making it to the finals was a victory.

"The whole of Croatia is fired up, win or lose," he said.

But, he added, smiling wistfully, a World Cup trophy would mean "the whole world."

The match in Russia ended shortly before 1 p.m. It's the French team's first World Cup victory since 1998.

The bar remained loud, but the Croatian table was quiet. Fans congratulated each other on a good match.

"We have to think about the big picture," said Mischell. "We are second in the world."

A downpour began over Moscow's Luzhniki Stadium, even as the rain subsided in Philadelphia. A handful of fans remained at the bar to watch as Luka Modric accepted the second-highest honor of the day: the Golden Ball, granted to the tournament's MVP.

"He left something for the next generation," said Sevo.