The Eagles' worst fear was realized when an MRI exam on Monday confirmed that quarterback Carson Wentz suffered a torn anterior cruciate ligament in his left knee during Sunday's 43-35 win over the Los Angeles Rams.

Wentz will miss the remainder of the season and postseason and will require surgery. Although no timetable was provided, the recovery will extend through the offseason and possibly into next season. Coach Doug Pederson said he was not told of any other ligament damage in the knee.

The Eagles confirmed that Carson Wentz tore the anterior cruciate ligament, or ACL, in his left knee during Sunday’s game against the Rams. The ACL is one of the four ligaments connecting the bones of the knee joint. Its function is to provide stability to the knee and minimize stress across the joint. 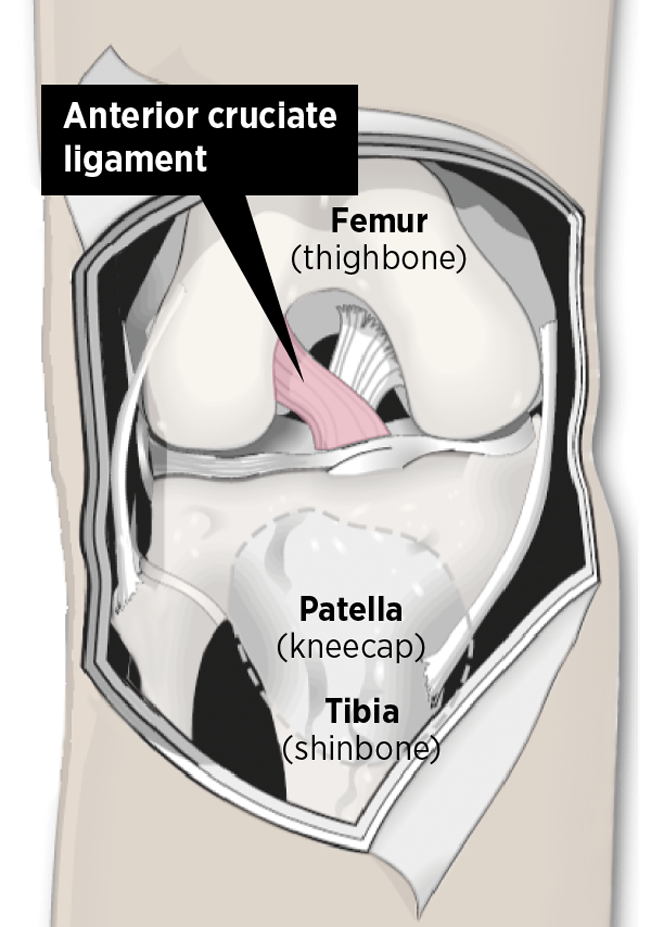 The nightmarish news came during what has been a dreamlike season for the Eagles. They have the NFL's best record at 11-2 and now will turn to veteran backup Nick Foles as the starting quarterback for the final three games of the season and the playoffs.

"The reason we went out to get Nick Foles is for reasons like this," Pederson said. "I'm excited for Nick, obviously. I hate it for Carson Wentz. I hate it for the season he's been having. But at the same time, it's been the 'next man up' mentality, and that's how we approach it."

Wentz, a bona fide MVP candidate this season, injured his knee Sunday on a third-quarter scramble. He remained in the game for four snaps after the injury, throwing his 33rd touchdown pass of the season in what might have been his finest game in an Eagles uniform. That broke Sonny Jurgensen's single-season franchise record set in 1961. Pederson said the injury might have occurred while Wentz was running and not while he lunged forward and was sandwiched by two Rams players, suggesting that it could be a non-contact injury.

Pederson made sure to project a confident message during his Monday news conference. Wentz was the biggest reason the Eagles were considered Super Bowl contenders, and his absence hurts their chances. Pederson offered an impassioned monologue aimed at calming fans' concerns — and perhaps setting the tone for his players, too.

"You can't lose faith," Pederson said. "This has been a resilient football team all season long. If there's ever an opportunity for me as a head football coach to rally the troops, now might be the time. We just came off a tremendous victory to win the NFC East. Guys are riding extremely high. It's a little bittersweet. But we've got the Giants this week. We've got an opportunity that if you win Sunday, you get a first-round bye. So there is still a lot to play for. That's what's exciting about the rest of this season. We're still playing for that opportunity to hopefully be in that game."

Pederson made repeated mentions to the other high-profile players the Eagles lost this season, including left tackle Jason Peters, linebacker Jordan Hicks, and running back Darren Sproles, among others. Each injury was considered a major loss that could halt the team's momentum, but they kept winning. Pederson was steadfast that the Eagles can overcome this loss, too.

Of course, a quarterback is different. But the Eagles are better positioned at backup quarterback than most teams because Foles has significant experience, including a Pro Bowl season in 2013 when he led the Eagles to the playoffs. Foles has 36 career starts and a 20-16 record. He has completed 60.5 percent of his career pass attempts for 9,313 yards, 56 touchdowns, and 27 interceptions with an 88.1 career quarterback rating. He has played for the Eagles, St. Louis Rams, and Kansas City Chiefs since entering the NFL in 2012. The Eagles signed Foles to a two-year, $11 million contract in March to upgrade the backup quarterback spot, even absorbing a $7 million salary-cap hit by cutting Chase Daniel to open the spot for Foles.

"Nick has played a ton of football," Pederson said. "I was here when we drafted him, and we drafted him for a reason. Then we went out and got him again this offseason for a reason. You never want it to be under these circumstances, but at the same time, my confidence is extremely high in Nick. … I'm going to continue to stay aggressive. I'm going to lead this football team. It falls more on my shoulders than it does these players. That's why they need to stay encouraged. That's why they need to stay he excited about this opportunity we have in front of us."

Pederson said the offense would not change much going from Wentz to Foles. The coach will tailor the play-calling to the plays Foles likes most, but it will be the same offensive system and style that the Eagles use with Wentz.

Foles has a history of injuries, missing time in his first three years in Philadelphia. He also was sidelined for most of the past summer with elbow soreness. That makes the new backup quarterback even more important, and the Eagles are turning to second-year pro Nate Sudfeld in that spot. Sudfeld, a sixth-round draft pick by Washington in 2016, started the season on the Eagles' practice squad before earning a November promotion. He's one hit away from entering the game for the Eagles.

"I've been there as a third quarterback being brought up and now the No. 2," Pederson said. "So not only are we getting Nick ready but also Nate at the same time has to be prepared to go in and play. Lot of confidence in them."

This is a conversation no Eagles fan wanted to have. And this diagnosis does not just affect the Eagles' present. It usually takes a player six months to a year to return from the required surgery, so this could be an issue in 2018, too.

But Pederson did not want to think about the long-term ramifications. He's focused on the present. The Eagles return to practice on Wednesday to prepare for Sunday's game on the road against New York Giants. They close the season at home against the Oakland Raiders and Dallas Cowboys before hosting a playoff game. And they'll play those games without their most valuable player.

"From my standpoint, you don't waver," Pederson said. "You don't let people see you sweat. You just put your head down and you just go to work. You get everybody ready to play. It was evident yesterday when Carson was out of the game, you saw Nick come in and come back and lead us to victory in that game. So that right there is a great step in the right direction."

Get insights on the Eagles delivered straight to your inbox with Early Birds, beat writer Zach Berman's newsletter for Eagles fans. Click here to sign up.

We Recommend
In Darius Slay, the Eagles have a corner with credentials and confidence: ‘I want the game on me’
Les Bowen
A 7th playoff team would’ve saved Chip Kelly, and cost Eagles and Andy Reid their Super Bowl wins | Marcus Hayes
Marcus Hayes
Jatavis Brown isn’t a big addition to the Eagles’ linebacking corps, but he is a speedy one
Les Bowen
Eagles’ first-round pick will be a no-brainer for Howie Roseman | Early Birds
Paul Domowitch
NFL officially expands playoffs; league exec believes 2020 season will start on time with fans in stadiums
Barry Wilner, Associated Press
Jalen Mills to fill Malcolm Jenkins’ considerable shoes at safety and he’s up for the challenge
Jeff McLane
We Recommend
Early Birds Newsletter