The rest of the nation was at commercial break when the moment finally broke. All night, it had been building: a rhythm, an energy, a quiet intensity, the ether of a universe with a population of one. At the uppermost bound of any craft is a nirvana-like dimension where one's surroundings recede into the distance and the present moment feels as if it is the only thing that exists. Nick Foles had spent three-and-a-half quarters alone in this realm, dropping back, sliding forward, calmly planting and spinning pinpoint throw after throw. For three hours, he had been all of the things they said he couldn't possibly be: poised, tough, accurate, confident…a Super Bowl caliber quarterback in every sense of the phrase.

Now, with two minutes remaining and the stadium rocking and the sideline dancing and the opponent staring blankly into the middle distance, Foles jogged toward the sideline and the silver-haired coach beckoning from just beyond the hashmarks. Doug Pederson opened his arms like an old friend and the moment lifted like a weight.

"Coach Pederson is the one who drafted me," Foles said later. "He was the only coach who flew down to Texas and worked me out. I was only worked out by one team, and that was by Coach Pederson. . .the Philadelphia Eagles took a chance on me. To win this game for him and this organization is something very special."

All of it made for a sight that was impossible to digest: the clock rolling to zeroes, the portable stage rolling toward the 20-yard line, the confetti cloud exploding and settling onto the Lincoln Financial Field turf. And there, in the middle of it all — his lanky frame draped in a gray shirt that said NFC Champions — stood the quarterback whose era had already ended, the quarterback whose time had already come and gone, the two-quarterback two years removed from contemplating retirement, now hugging his teammates and pumping his arms and joining a sold-out stadium in its orgiastic chants.

You could've predicted a lot of what went down on the final leg of the Eagles' improbable journey to Super Bowl LII: that a relentless pass rush would wreak havoc on the Vikings' ability to execute their game plan; that the entire complexion of the game would change on a touchdown return off a Case Keenum interception; that the Eagles' front seven would smother Minnesota's running game, further amplifying the effect of their pass rush; that Pederson would stomp his foot down on the gas pedal and refuse to let go, tacking on three points with an urgent drive at the end of the first half and then opening up the second with a 41-yard flea-flicker bomb for a touchdown, stunning the Vikings sideline into the silent, wide-eyed stillness of resignation.

What you could not have predicted was the performance of the man you saw standing tall in the pocket on that flea-flicker heave and so many other throws. In the biggest game of his life, when the stakes were the highest, Foles was better than he had ever been before.
Early Birds Newsletter

The numbers don’t always speak for themselves, but, in this case, they might undersell things: 26-of-33, 352 yards, three touchdowns, no interceptions.
No, this game wasn’t about the numbers. It was about the throws. 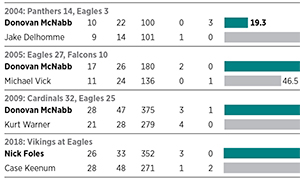 Nick Foles’ game against the Vikings was the best performance of any Eagles quarterback in an NFC championship game. Click here for a graphic comparing Foles’ numbers with those of other Eagles quarterbacks.
It started after the interception return by Patrick Robinson that tied the game at 7-7 in the first quarter. It was the Eagles second offensive possession, and something clicked. Maybe it was that third-and-long throw to Zach Ertz: the protection was perfect, and Foles made the most of it, calmly scanning the field, stepping forward in the pocket, finding Ertz open in the middle of the field, driving a throw into the perfect window for his tight end to bull past the first-down marker. From that point on, he looked like the ghost of some fantasy past, the fulfillment of a prophecy in which many once believed he was a quarterback capable not just of reaching the Super Bowl, but of leading a team there. He made all the throws that were there, and made up the rest.

"All week he's been calm, he's been confident, he's been energetic," Pederson said. "He's everything we knew he was. He's been that way now for two weeks and it's shown on the field."

Rewind that 53-yard touchdown pass to Alshon Jeffery with just over a minute remaining in the first half. How long did he stand tall in that pocket? Five, six seconds? All the while, allowing the play to develop to the point where Jeffery was wide open a half-a-football field away. A testament to the protection in front of him? Sure. But watch it again. Look at all that was going on around him, purple pants sliding this way and that, to his right, to his rear, at his feet. You kept waiting for the inevitable to happen, for some errant hand to make contact with his cocked arm, to crash through a block that could not hold any longer. But the man with the ball in his hands looked as though he was operating in some other dimension, as though there was some sort of force field keeping the pass rush at bay, and, thus, beyond the scope of his worries.
He looked like that throughout the night, whether he was taking a huge shot in the midsection from a blitzing Anthony Barr while putting the ball right on Jeffery for a first down, or rolling to his right and spinning a beautiful ball over perfect man coverage into Nelson Agholor’s hands for a 42-yard completion that only added to the party that  already erupted in the stands.

"In sports, everything is a process," Foles said, "Everything you do in life is a process that you work at it, and you can't give up. When you have a bad outing, everyone wants to be very critical and I get that it's part of the media's [responsibilities]. I totally understand. But as players, the special thing is that no one in the locker room doubted me. Everyone just kept believing. We kept working and we kept getting more reps in practice. It's just a rhythm thing. You just have to keep working."

Pederson, a former back-up himself, knows what it’s like to get stuck with a label, to harbor an unrequited belief in oneself. So as he wrapped his arms around Foles amidst the deafening din, he leaned in towards his earhole and spoke the kinds of words that can redeem a career.

"I just told him how proud I am of him," Pederson said, "and I loved him."