Jalen Gaffney, Niels Lane and Isaiah Wong break down how intense and non-stop the summer recruiting circuit can be.

It was June 15, 2017. Gaffney, now a rising senior at Westtown School and one of the Philly area's top basketball recruits in the class of 2019, remembers the moment instantly and vividly. No recruit ever truly forgets it: the first minute he or she can be contacted by college coaches.

Gaffney's offers poured in — Tulane, Richmond, Eastern Kentucky that day; Drexel, La Salle, and Hofstra, the next. And they haven't stopped since. He has long stopped thinking about those low- to mid-major schools; the four-star guard is juggling heavy interest from the Xaviers and Floridas of the college basketball universe now. 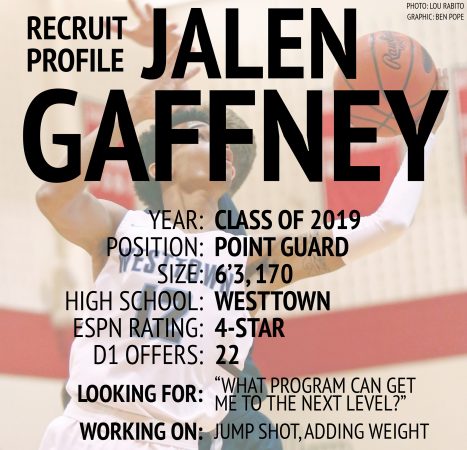 But his experience is one that hundreds of other Division I-bound high schoolers share. It’s a whirlwind of networking and traveling and performing that infiltrates every part of day-to-day life, starting on or even before that one otherwise indistinguishable day in mid-June of their junior summer and lasting until a college commitment is made.

College coaches and aspiring players anticipate great changes starting in 2019. This fall, the NCAA, is expected to implement recommendations by the Commission on College Basketball, headed by Condoleezza Rice, that will drastically reduce the exposure afforded to AAU teams and change the timing and logistics of the infamous "July evaluation period," which ended Sunday.

For now, though, the controlled chaos of the current system remains as fervent as ever. When the annual July pilgrimage from camp to camp and tournament to tournament brought some of the nation's top recruits (and top coaches) to Reading for a few days this month, Albright College's sleepy campus was transformed into a madhouse of nonstop basketball action. Games on crammed-in courts, lined with scouts and coaches, featured players ranging from two of the top 10 recruits in the country to guys hoping to land on a Division III roster.

Gaffney was one of the standouts. Niels Lane, a Class of 2020 recruit from Perkiomen School in Pennsburg, was another. The two guards are at different parts of the recruiting timeline.

Gaffney said he was hoping to start narrowing his list, while Lane was trying to attract even more interest. Yet, for four days of Hoop Group Elite Camp II, their routines were the same. 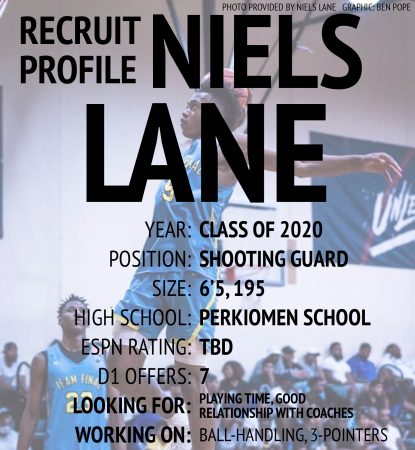 Lane, leaving a game at 6 p.m., said he needed to grab dinner, then take a quick nap. He'd been been up since the "Early Bird Workout" at 7:15 a.m. and had another game in just two hours.

There wasn't much time for Lane to sleep at all, actually, since June 15 rolled around.

"Ever since then, my phone's been blowing up," he said. "I didn't realize [coaches] would contact me as much as they do, and I also didn't expect that many coaches to contact me within the first few days. I got probably around 20 to 25 calls or texts throughout that weekend. That caught me off-guard, but I'm all adjusted to it."

Providence and UConn have made offers to Lane, plus Penn, Drexel, and a handful of others, and the pattern suggests plenty more will follow. Lane said he couldn't help but make eye contact with a familiar Clemson assistant, one of a dozen college coaching staffers mere feet away, during his evening exhibition. Virginia Tech has also supposedly been in close contact.

It's possible those schools didn't first notice Lane at Hoop Group, but rather at another event. That's the nature of the so-called "live period": Recruits attend as many tournaments as possible, not only to get maximum exposure but because it's simply the way things are. Lane had just come from the Nike EYBL Peach Jam, a tournament in South Carolina; Gaffney was a few days removed from an Under Armour Association tournament in Atlanta.

Isaiah Wong, a rising senior guard at Bonner-Prendergast and a four-star recruit also attending the camp, was bound for Las Vegas the following week for the Under Armour Finals, then to the Steph Curry Select Camp in early August. He also has a boatload of high-profile offers, including Villanova, Miami, UConn, and Pitt, but he concedes he's growing weary of the never-ending recruiting process. 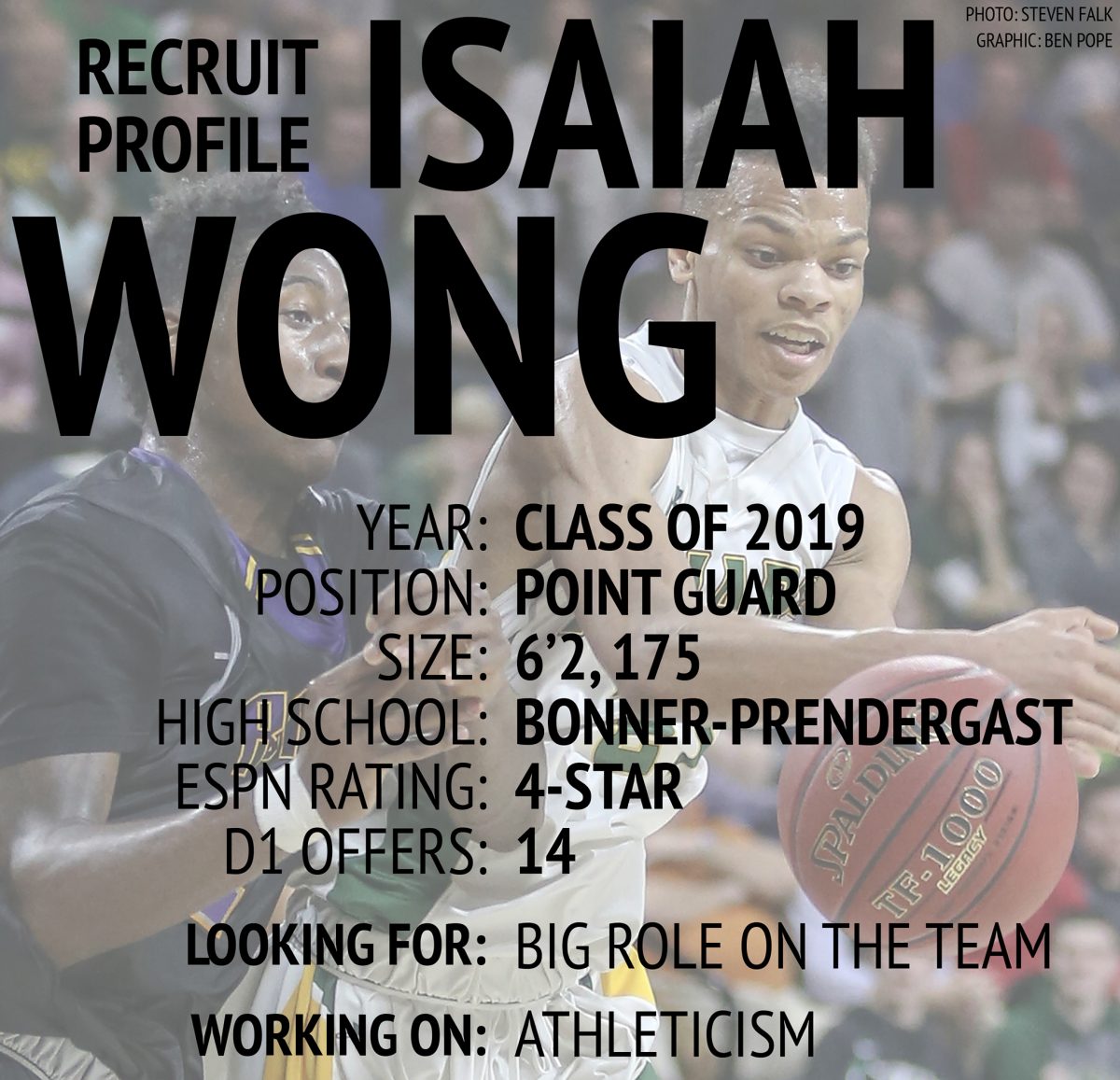 “I’m looking forward to having it wrapped up soon,” Wong said. “I am tired of … all these college coaches calling me and all the expectations of sometimes t I have to do just to get more looks.”

So he has done something about it: He has added to the NCAA's limits on recruit-recruiter contact by establishing his own limits for how often coaches can talk to him. "They accept it. I'm not talking 24/7," he said.

That might or might not have impacted Wong's list of offers, but in this intense, personal, down-to-the-minute recruiting world, unusual ideas are sometimes needed to maintain sanity. Gaffney and Lane said that coaches have asked them about family matters, academic problems, and even their favorite movies and shows (Gaffney is into "Dragonball" animes, he said).

"It is a little hard to juggle all of that sometimes — there's times where you don't want to talk to anybody, but you know you have to; you can't burn bridges," Gaffney said. "You've just got to stay cordial. You've got to show you're interested in all those schools."

To portray the merry-go-round as nothing more than a necessary evil, or even a burden, would, however, be inaccurate.

Gaffney compared conversations with coaches to talking to friends, and Lane said he tries to "impress coaches in every way" because he is, after all, competing for a full ride to college — a big deal, even if it is virtually assured for such a recruit. Plus, his love of basketball and competitive personality provide plenty of internal drive.

Lane will still be hurtling down this recruiting path next summer, when AAU basketball and the recruiting scene will likely be revamped. Gaffney and Wong, meanwhile, will be settling down with their college destinations.

For now, though, their respective whirlwind rides continue, and every text and point scored matter.

For several minutes after a game at camp, Wong practiced an elaborate dunk in which he bounced the ball in front of him, then caught and dunked it while spinning. "I like doing it whenever people look at me," he said. "I'm not really known for my dunking ability … but [I'm] showing them that I'm athletic, too."

With moves like that and attention like this, it's easy to forget that these three major recruits and the hundreds of others bound for D-I schools every year are still high school kids. Asked what was most misunderstood about the recruiting process, Lane cited its stressfulness, and Gaffney noted its difficulty to balance with off-the-court, daily life.

And that reality is certainly never forgotten. Gaffney has been learning and living it for years, since he received his first offer — from Binghamton — as a freshman, and especially ever since his phone erupted a year ago in June. It reached a new peak in April, though.

"I got a call from Coach [Mike] White at Florida, and missed the call, and I told him, 'Oh man, I was at prom,' " Gaffney said. "Sometimes they call you at the weirdest times."

Yes, indeed: The life of a top-tier basketball recruit never takes an hour, much less a whole prom night, off.