Third in a four-part series

BOCA CHICA, Dominican Republic — Before he accepted the Phillies' offer of $5,000 last summer to become a professional baseball player, Rafael Carvajal worked for his father. He was a cobrador, the man who collects fares on the bus that made the daily round trip of more than eight hours between his family's home in Banica, on the Haiti border, to Santo Domingo.

Carvajal was 19, well past the age Major League Baseball teams typically sign Dominican players, and this treacherous bus ride was his future. He could not read or write. He stopped going to school at 13 because, in his estimation, he learned half as fast as the other students.

"I felt bad about that," Carvajal said, through an interpreter.

A friend had told him not to quit baseball. But every day that passed without an offer reduced his already slim odds. So he kept pitching. It was that or the bus.

The Phillies liked his arm enough to provide an opportunity — and a bed — at their Dominican academy. 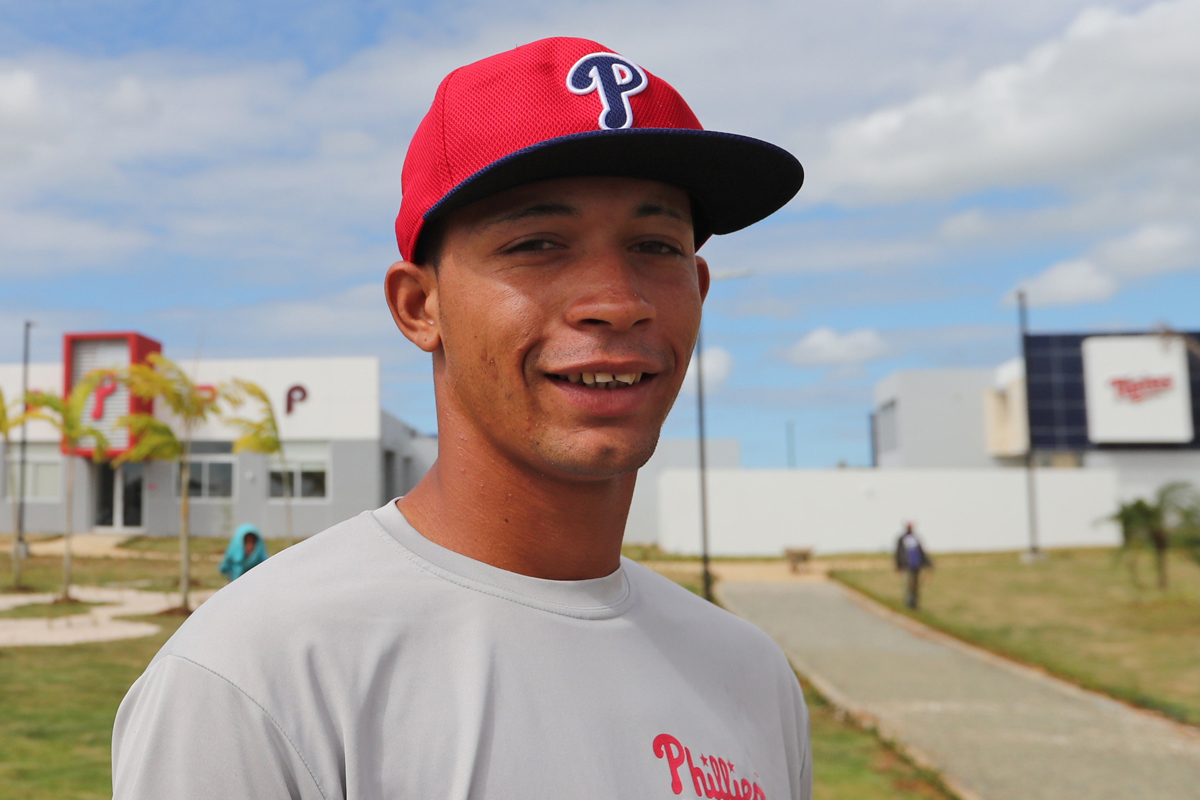 david swanson / Staff Photographer
Rafael Carvajal struggled in school while working with his father on a bus route in the Dominican Republic. After signing with the Phillies, he is trying to improve his reading skills - and someday reach the majors.

Roughly 10 percent of the players who live at the academy will ever leave the island to advance their baseball career, let alone make it to the majors. The academy, which can sleep 78 players, is filled less with big-bonus signees and more with players such as Carvajal. The Dominican Republic has the most staggering school dropout rate in Latin America, and only 62 percent of male children even attend high school, according to UNESCO data.

Life after baseball, which affords so few guarantees in the Dominican, can be difficult. That is why the Phillies, since 2012, have offered a high school education at the academy. Before, only English classes were mandatory.

The Phillies are not the only team that devotes resources to educate their foreign players. The team has adopted an altruistic approach, given that many of these players will never step inside Citizens Bank Park. But there are practical reasons for the education.

"Think about a corporation, for instance," said Ray Robles, the Phillies' assistant director of international operations. "When you have employees, you want to train them in every facet there is. It's the same thing with the players. Baseball is a game where you have to think a lot. You have to think on the fly. But if you've never had a learning environment, which some of those kids have not, they're just trained to hit a ball a mile away."

Carvajal, when he signed, submitted his most recent grades to the Phillies. Robles met with him. The team assigned a special teacher to work with Carvajal.

"I am learning," he said, "thanks to God and the Philadelphia Phillies."

Carvajal is 20 now. He is in the sixth grade. 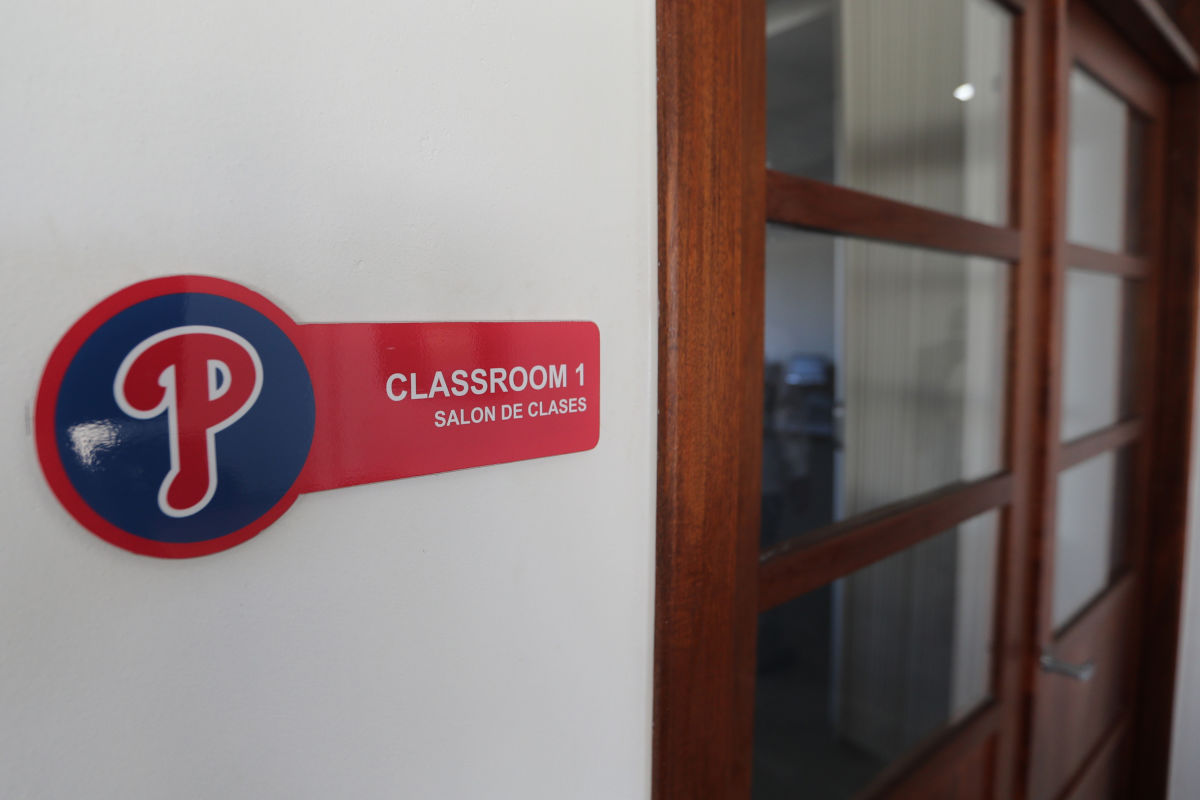 The roars were louder and louder with each name read.

There was Luis Encarnacion, 19, who signed for $1 million but has yet to flourish as a hitter, striding across the stage for what he later called "a dream come true" during his commencement speech.

There was Jose Taveras, 23, a $5,000 lottery ticket who led the South Atlantic League in strikeouts last season, having his tassel moved from right to left by John Middleton, the billionaire owner of the Phillies.

A soft techno beat played on the speakers inside the covered structure that is typically used for batting practice. Eleven players, the academy's largest high school graduating class yet, crossed the stage last month. One graduate lingered. The crowd, which included family and friends and top Phillies officials and some 50 players in uniform, hushed.

There was Alex Concepcion, 32, whose dream once carried him to Allentown only to return to his native country, beaming with a black cap and gown pulled over his red jersey and pin-striped baseball pants.

The audience rose and cheered. The players started to chant. It was not a graduation ceremony, but a dance party. It was the reason why, later, Middleton instructed Robles to do whatever he could to expand the team's education offerings.

Soon, the noise subsided. Concepcion stood behind a podium.

"To the Phillies, I want to say a few words," Concepcion said, concluding his speech. "Never consider studies as an obligation, but as an opportunity to penetrate the beautiful and wonderful world of knowledge. Thank you."

'Something to fall back on'

Lynette Nadal has taught Latin American baseball players for more than 20 years. When Vladimir Guerrero wrote his name for the first time, she held his right hand. She has witnessed a transformation in baseball's thinking, from a time when franchises such as the Dodgers, Expos, and Braves offered sparse English and etiquette classes to the current day, when more teams have started to follow the high school model of the Indians and Mets.

An education, she said, changes the world of a Latino player. As Nadal recited the 12 names of the Phillies who were graduating high school, she cried. 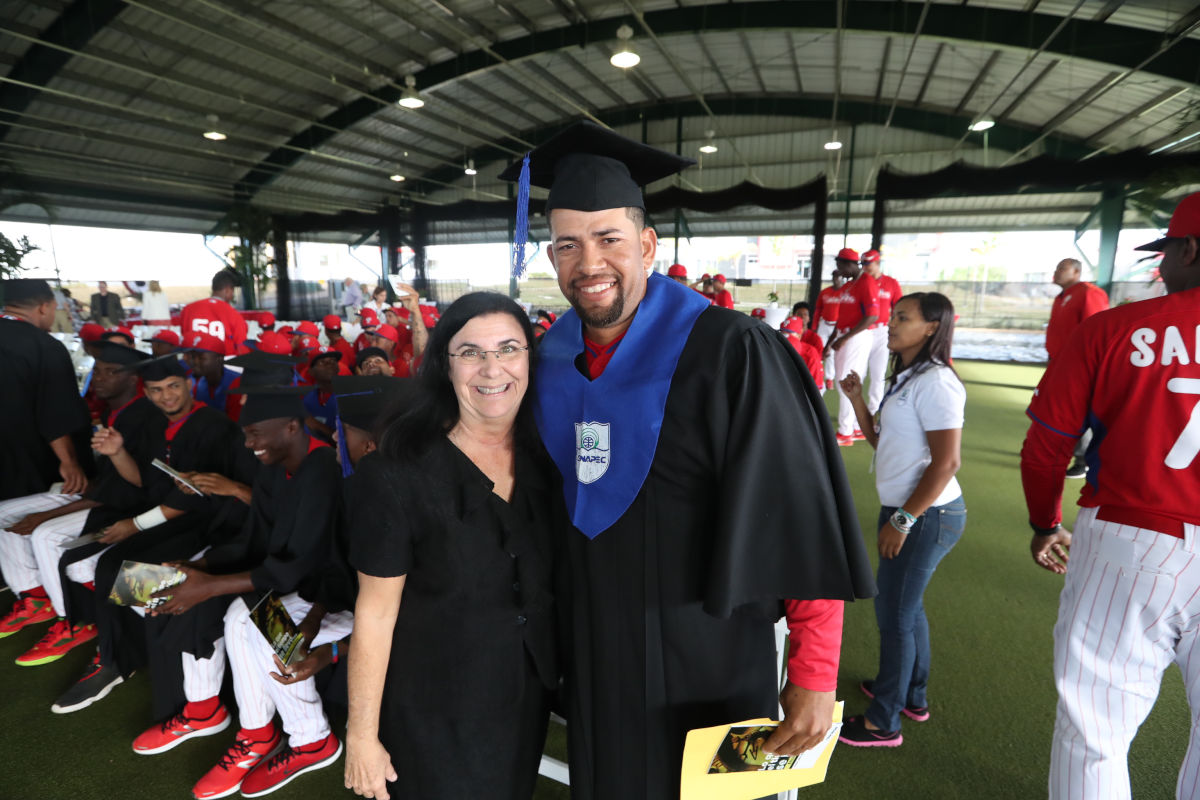 "These young men live with passion in all they do," Nadal said. "This is baseball for Latin players. Pure passion. If they did not live like this, it would have been impossible for them to arrive at this point in their lives as signed, professional baseball players and high school graduates."

The players flock to the academy from varying backgrounds. Some, Nadal said, must begin with one lesson before all: How to eat with a knife and fork. The poorest teenagers, the ones who come from the barrio where dirt-floor houses are made of metal siding, use a tablespoon to eat their rice and beans.

Robles pitched an expansion of the Phillies' education program in October 2012. The team partnered with Cenapec, a Dominican institution, and holds classes for four hours every Wednesday. They teach algebra, geometry, grammar, biology, chemistry, social studies and history. Inside the team's $9 million academy, there is space for three classrooms. The computer lab has 16 brand-new PCs.

"We have to give them something to fall back on," Robles, 32, said. "With the low level of education those guys have, how can we expect them to learn a second language? It's tough. They barely have a good grasp of their own language.

"It has helped a lot. These kids are learning and doing critical thinking like math; it has helped them develop the cognitive side. Even the coaches can attest to that. They would tell you we are developing a different type of kid now." 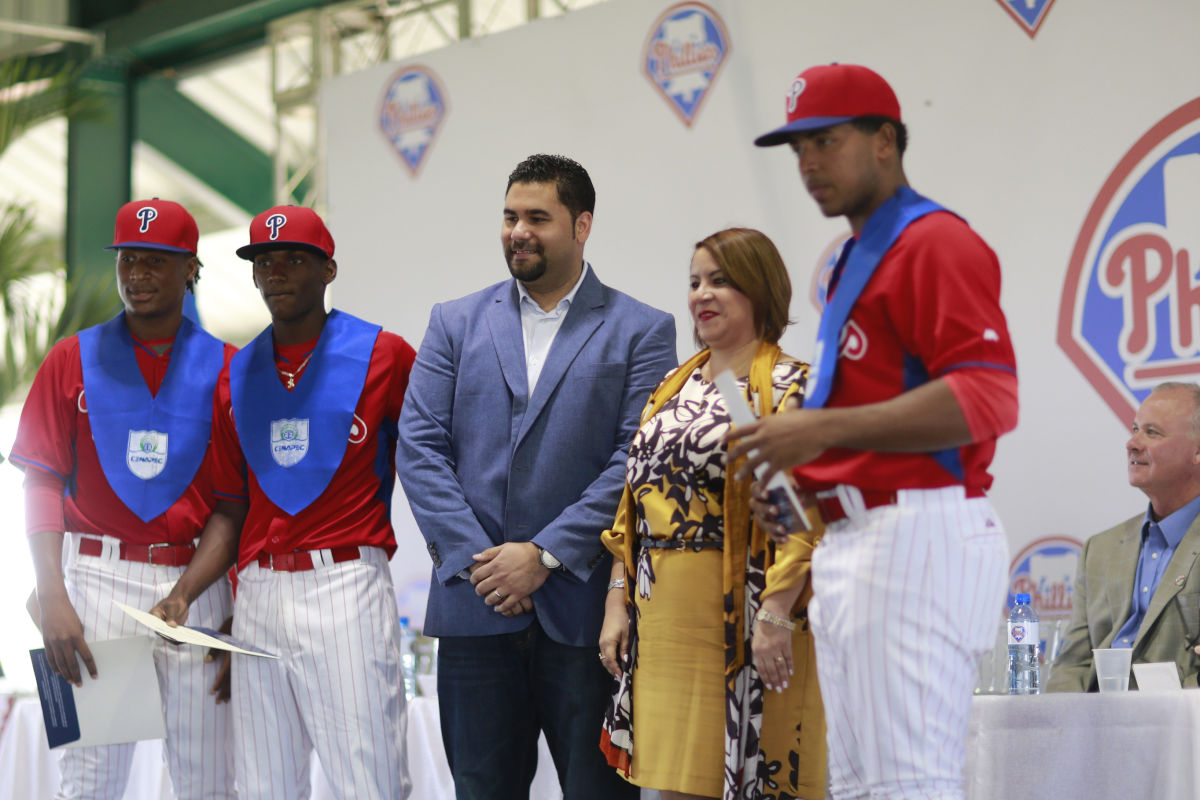 There are limitations. At the academy, baseball comes first. Some of the players are not inclined to return to school. In the first four years of the program, the Phillies have graduated 26 players from high school. None have reached the majors yet.

Miguel Nunez is the closest. The hard-throwing Dominican righthander signed with the Phillies for $225,000 in 2010. He graduated from high school in 2013 and could begin 2017 in triple-A Lehigh Valley's bullpen. The majors are within reach.

"Baseball is not everything," said Nunez, 24, whose English is proficient enough to translate for others. "For me, it is the most important sport. It is my career. But you never know what you will be in the future. The school was really a nice opportunity for me because that's another plan."

'The least we could do'

In 2010, before he became a coach, Concepcion was one step from his goal. He was never a prospect, but he rose through the Phillies' system to triple-A Lehigh Valley. He hurt his knee. The Phillies hired him in 2011 to coach the Dominican pitchers.

He quit his high school classes at the academy three times. The motivation, at times, was missing. But his players and his 5-year-old son, Joshua, pushed him. During his commencement speech, he stared at Joshua.

"You need to finish school like me," Concepcion said, "because we are the example."

Middleton, the team's most influential ownership partner, told Robles he wants the classes expanded to four or five days a week. Robles envisions more technical classes, ones that prepare the Dominican players to live in the 21st century. 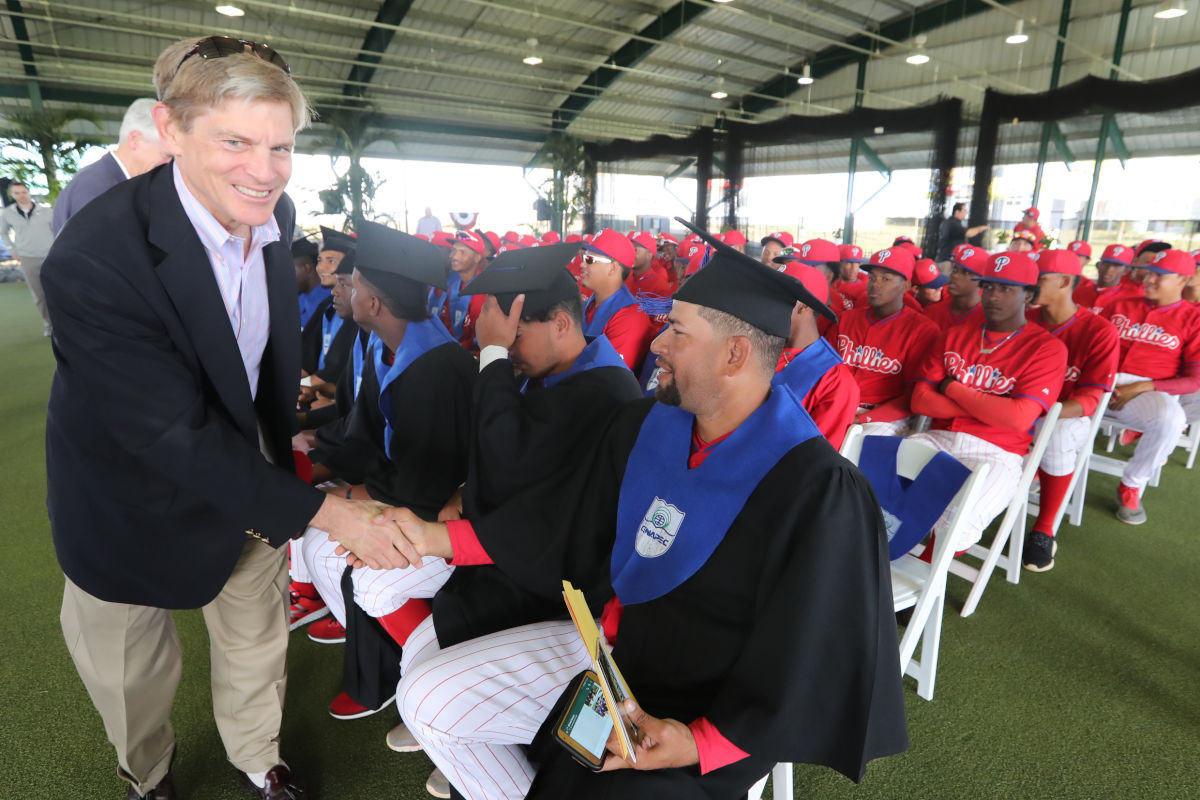 "We want to make sure whenever they come into our system, if they leave, that we did everything we could to guide them to have a better life once they're done," Robles said. "They're leaving so much behind just to play for the Phillies. Giving them a little education, it's the least we could do."

Carvajal, who waited longer than most Dominicans for his chance, pitched in 32 innings last season with the Dominican Summer League team. He posted a 0.84 ERA with 22 strikeouts and four walks. He has a chance to leave the island, even if just for rookie ball in Florida. His learning disabilities have slowed progress in school, but it is progress.

"I am thankful for that," Carvajal said.

Once the graduation ceremony ended, the speakers blasted some merengue. The players danced. The graduates hugged family members. They posed for photos. David Montgomery, the Phillies' chairman, remained at his seat in the audience. He marveled at his first trip to the Dominican Republic.

"Perspective," Montgomery said, "is everything."

Part 4, coming Thursday: Sixto Sanchez has pitched only 54 innings in America, innings that vaulted the slender Dominican teenager to his status as one of the best pitching prospects in the Phillies' system. Meet the pitcher with a 0.50 ERA whose idol is Pedro Martinez, as he represents a fast-growing area of Phillies' strength: Young, low-level foreign arms that throw super hard.