The 3,500-seat esports facility is another sign of the surging popularity of esports, where players compete in video games before large crowds. It will rise next to Xfinity Live! and within walking distance of the Linc, Citizens Bank Park, and the Wells Fargo Center.

Comcast Spectacor, which owns the Flyers, is to announce Monday morning that it will construct the first arena for gaming fans in the U.S. for the Comcast-owned Fusion, company officials say.

The $50 million project is a testament to the surging popularity of esports, in which players compete in video games before large crowds. The company plans to break ground this summer on part of the 47-acre stadium complex site that Comcast Spectacor leases in South Philadelphia. The 3,500-seat arena will rise on a parking lot, next to Xfinity Live! and within walking distance of the Linc, Citizens Bank Park, and the Wells Fargo Center.

Nate Nanzer, commissioner of the 20-team Overwatch League, said there has never been a special-purpose esports arena “built anywhere. This is a huge step for esports. This is something we will see pop up all over the world.”

Besides housing Comcast’s Fusion, one of the Overwatch League’s teams, the venue is planned to be a major east coast hub for gaming events, company executives said.

The arena will mark the third major project that Comcast Spectacor is now undertaking on the site. It is renovating the Wells Fargo Center for $250 million and seeking tenants for a 10-story office tower, costing $80 million, also near Xfinity Live. The price tag for the three projects, including the new arena, is $380 million. The company may add yet more development on the site, say those with knowledge of the company’s thinking.

Planned Projects Near the Stadiums

Comcast Spectacor and Cordish Cos. revealed plans for a new 3,500-seat esports stadium adjacent to the Xfinity Live complex in South Philadelphia. The facility would house Comcast's esports team, the Fusion, and would also host other events. Also planned nearby would be a 10-story office building. 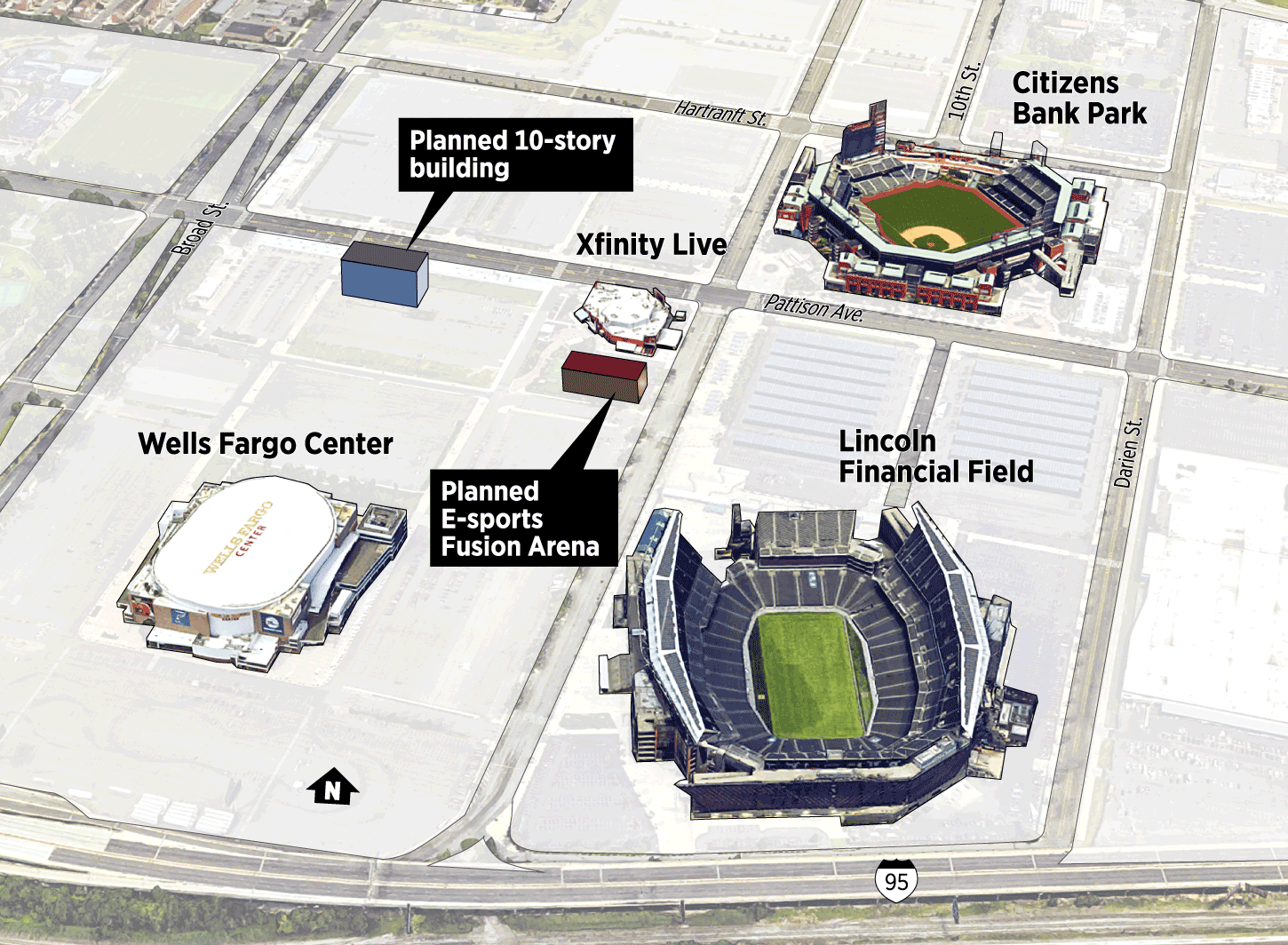 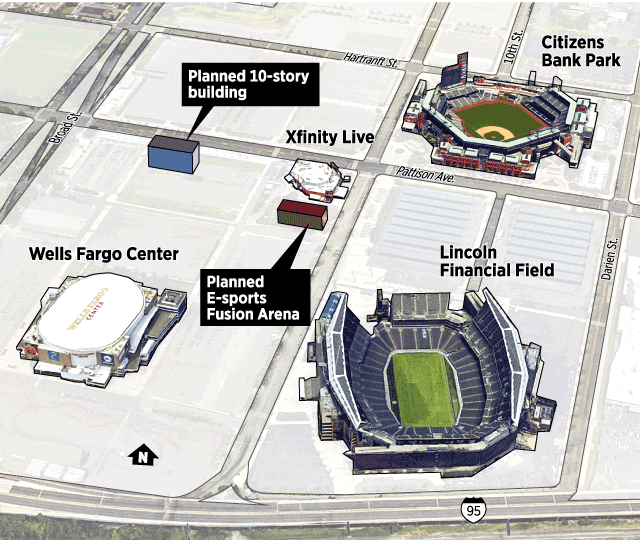 Esports, or watching highly skilled gamers compete with each other for titles or prize money, has soared in popularity globally, particularly in Asia but also in the U.S. The Overwatch League replicates the legacy professional sports model with 20 city-based franchises in China, South Korea, Canada, France, England and the U.S. catering to local fans.

Overwatch League competitions -- with six gamers battling six others in a survival game -- are viewed over the Twitch streaming service and televised on ABC and ESPN. Activision Blizzard, which owns the Overwatch game, says that 40 million people play globally, including 400,000 in the Philadelphia television market ranging from Delaware and the Jersey Shore to Harrisburg.

Fusion itself has almost 100,000 Twitter followers and one of its popular players, Gael Gouzerch, or @poko, boasts 40,600.

Esports no longer carries “the stigma of you in your basement,” said Phil Weinberg, general counsel at Comcast Spectacor.

Tucker Roberts, the son of Comcast chief executive Brian Roberts, is president of Spectacor Gaming and the Fusion.

“The East Coast does not have a hub for gaming,” said Joe Marsh, chief business officer for Spectacor Gaming and the Fusion, adding that "on the gaming side, we think we will keep the building lit up most of the year.”

Comcast Spectacor expects to hold about 120 events a year in the new arena, with other gigs ranging from TED Talks to electronic dance music and K-pop concerts. K-pop is a music genre from South Korea that is popular with Fusion fans, Comcast Spectacor officials said. The Fusion Arena is looking to sell naming rights to the venue.

“The way we have designed the spectator bowl [inside the arena] optimizes the viewer experience,” Brian Mirakian, Populous senior principal, said last week.

Like other teams in the Overwatch League, the Fusion are playing this year at Johnny Carson’s former studio in Burbank, Calif., now called Blizzard Arena. Ticket prices for the Fusion Arena have not been determined, officials said. About 15 percent of the Fusion Arena has been designed with premium-priced luxury seating and suites, said Dave Scott, Comcast Spectacor CEO.

Next year, the Fusion team will relocate from California to Philadelphia, and compete in temporary venues for a year. Those locations could be the 2300 Arena in South Philadelphia and Boardwalk Hall in Atlantic City. The Fusion Arena is expected to open in early 2021.

The Overwatch League regular season began in February and extends through August, with playoffs and championship games in September. The Fusion on Friday were in third place, with a 5-2 record.

The new Fusion Arena fits into the 47-acre site’s master development plan, which dates to the 1990s. Comcast Spectacor officials say they have informed city officials of the arena construction.

According to the master plan, the South Philadelphia sports complex -- which includes the Linc and the Citizens Bank Park -- has to maintain 18,000 parking spaces. Comcast Spectacor says the complex will continue to meet that requirement.

Bob Fernandez
An Inquirer reporter since 1993, I report stories with an emphasis on enterprise, corporations, college debt, and features with a money angle.