In a nod to environmentalists, a new version of Pa.s contentious nuclear rescue proposal would steer some money to renewable producers.

A new version of Pennsylvania’s contentious nuclear rescue proposal would steer as much as $541 million of ratepayer subsidies annually to clean-energy power producers, though in a nod to environmentalists, not all of it would go to nuclear generators.

The General Assembly will need to act in the next few months if it wants to avert a threatened closure of Three Mile Island Unit 1, which owner Exelon Generation says is losing money. Aument, in an interview Wednesday, framed the bill as a means to prevent the early closure of zero-carbon power producers, which would largely be replaced by pollutant-emitting fossil-fuel plants.

Pennsylvania is the fifth state to take up a proposal to support nuclear power plants, which have struggled to compete in energy markets where low-cost natural gas has driven down the price of electricity. The nuclear rescues are opposed by some environmentalists, consumer advocates, and the natural gas industry, whose production of new shale-gas resources has fundamentally reshaped energy markets in the last decade.

Both the Senate and the House nuclear rescue proposals would amend the state’s 2004 Alternative Energy Portfolio Standards Act (AEPS) to add a category of zero-emission power reserved largely for nuclear producers that would supply 50 percent of the state’s electricity demand.

Aument said his proposal, Senate Bill 510, differs from the House bill by imposing penalties on power producers that fail to meet their clean-energy commitments, by creating a procedure for the Pennsylvania Public Utility Commission to audit compliance and by allotting some of the new zero-emission credits to renewable producers, such as wind, solar, and hydroelectric plants.

“This is not just a nuclear bill,” said Aument. “The broader policy goal is promoting innovation, clean energy, and carbon reduction.”

The costs are unlikely to win over advocates of price-sensitive customers, such as large manufacturers and the AARP. But Aument said the costs of allowing nuclear power plants to close prematurely, and reducing the state’s entrenched nuclear industry, are greater than the subsidies.

“We certainly believe there would be a far greater costs in the future to consumers if the premature retirements of these plants were to take place and there would be a lack of diversity in the market,” Aument said.

Critics say all of the state’s nuclear power plants except Three Mile Island are currently profitable (though First Energy Corp. has announced it plans to shut down its twin-unit Beaver Valley Power Station in 2021). Aument said the legislation intentionally does not include a financial test for power producers to receive support.

“I did not want this bill to be a bailout, to be a financial rescue,” he said. “I wanted it to be about the broader policy goal.” 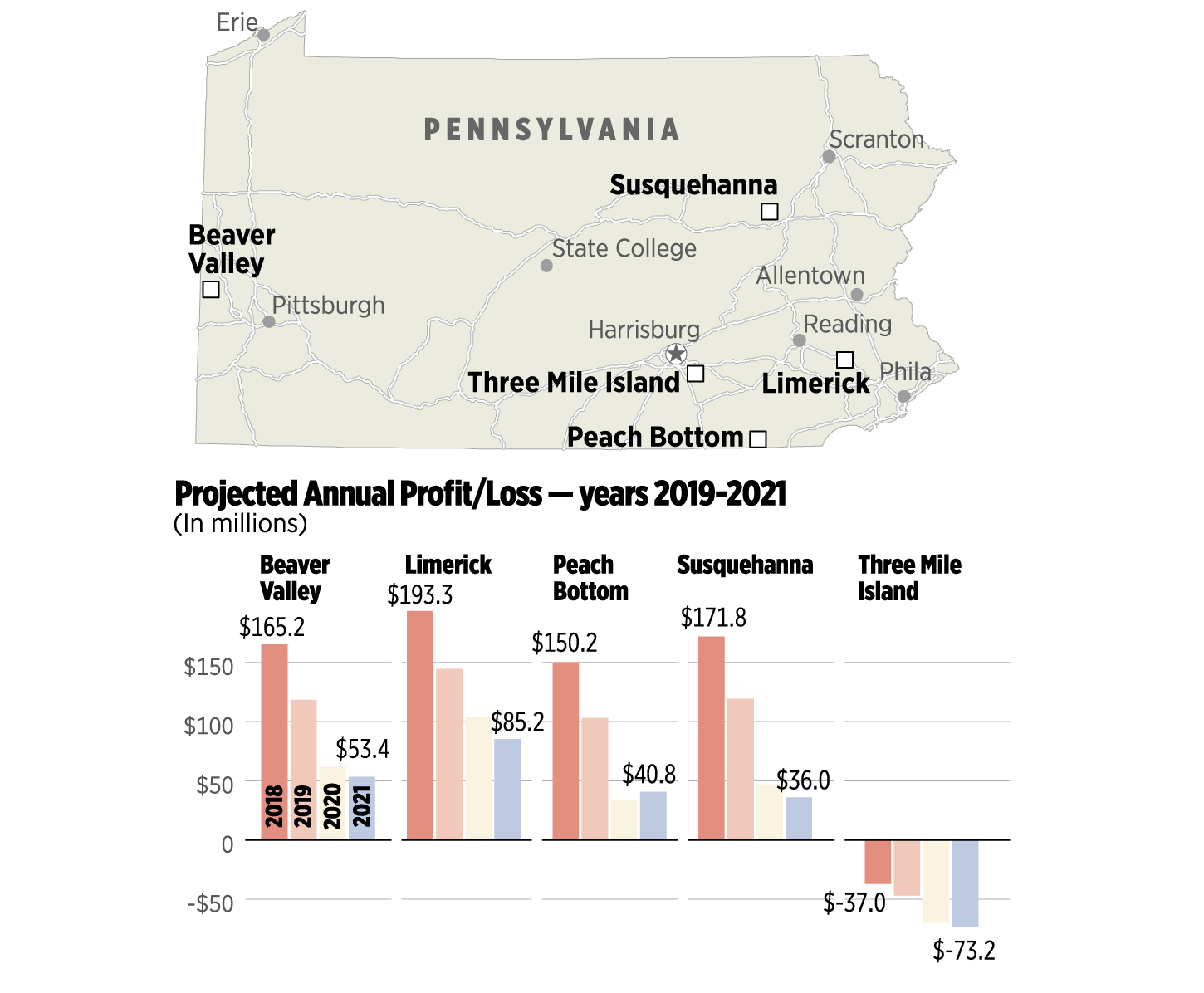 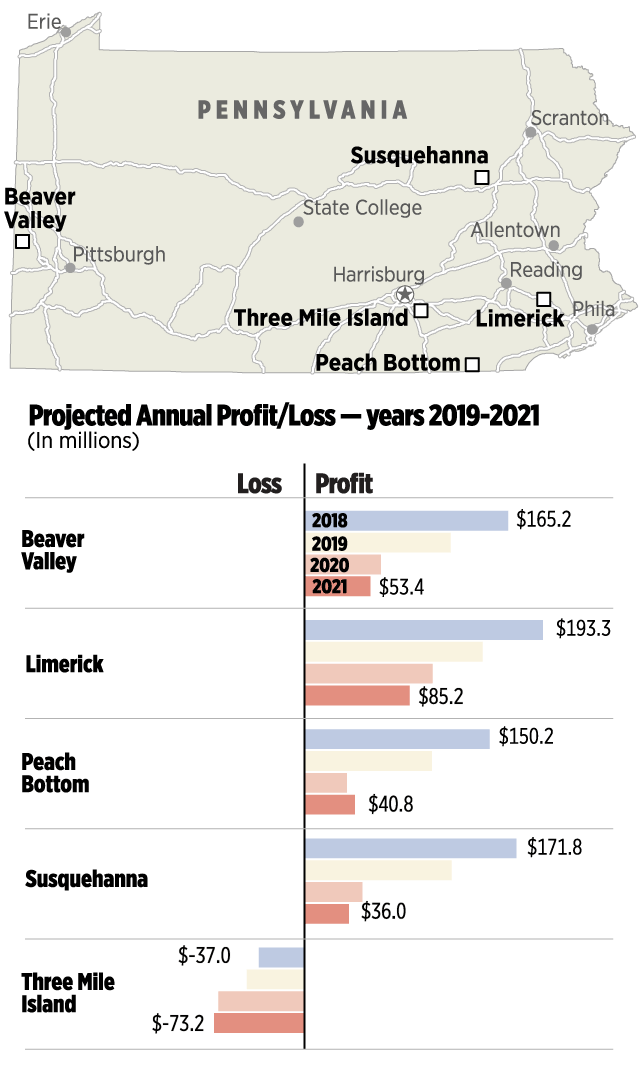 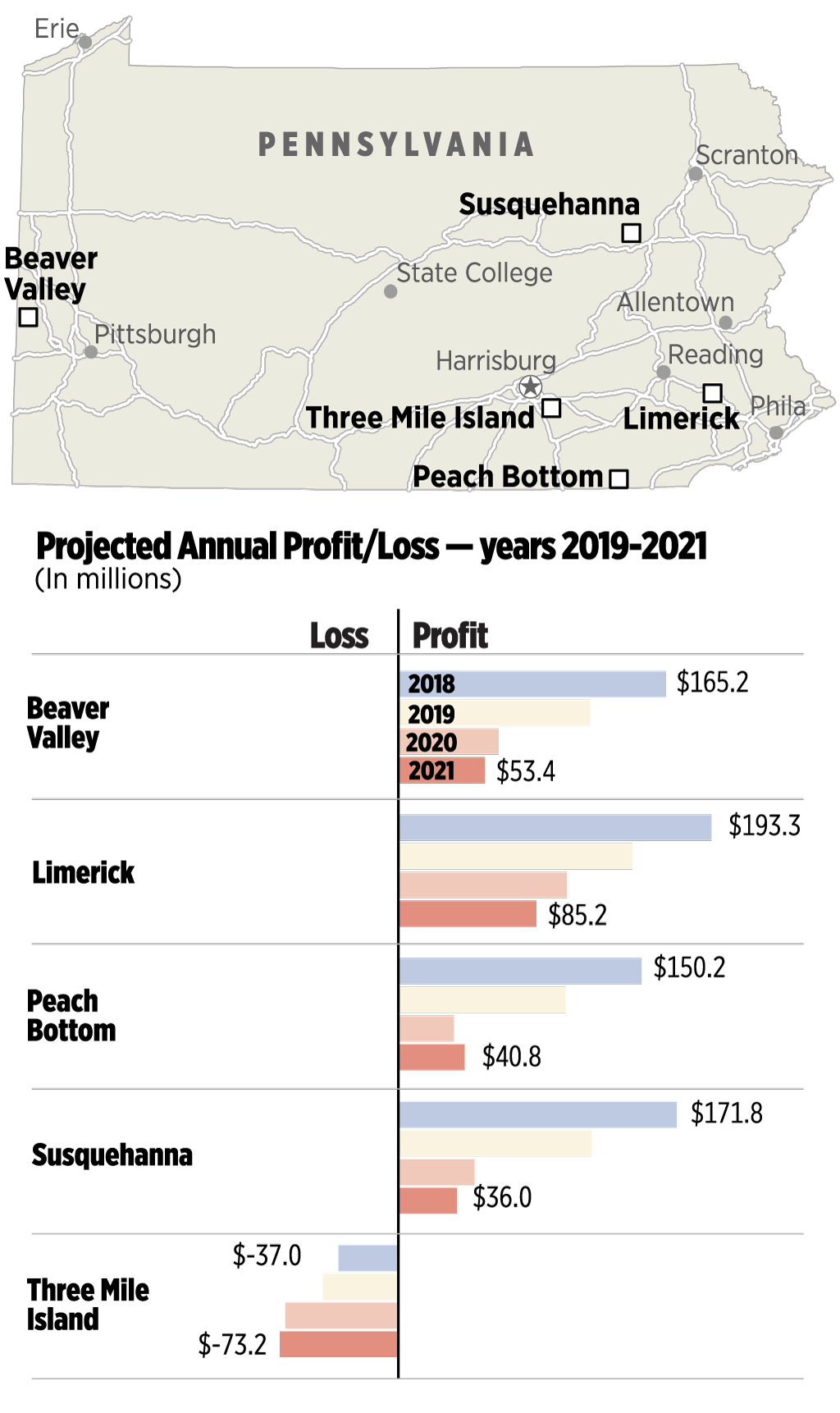 The current AEPS mandates that 18 percent of power sold in the state be derived from alternative energy sources by 2021. The first tier of incentives reserves 8 percent of the market for emerging renewable producers, including wind, low-impact hydro, and a 0.5 percent market share for solar photovoltaic producers. A second tier sets aside 10 percent of the market for alternative power producers, including large-scale hydro, waste-coal generators, and power plants that burn solid waste.

The legislative proposals would create a third tier, which would set aside an additional 50 percent of the market for zero-emission producers. Aument’s bill specifies that 77 to 83 percent of the Tier III credits would be reserved for nuclear producers, so about one-fifth of the new credits would be available to renewable energy producers, potentially doubling the subsidized market for renewable power from the current AEPS.

The Senate proposal spells out upper and lower limits of the price of the new Tier III credits, which would be about half the value of the current Tier I credits for renewable power. That would peg the annual cost to consumers of between $459 million and $551 million, based upon 75.5 million megawatt hours of consumption — 50 percent of the state’s current power demand.

The battle lines are already forming around the proposals.

Citizens Against Nuclear Bailouts, an opposition coalition that includes the powerful natural gas industry, denounced the bill as an anticonsumer measure. “Why would any lawmaker in either branch of the state legislature think it is a good idea to steal from ratepayers to pay for a problem that doesn’t exist?” the group said in a statement on Wednesday.

PPL Electric Utilities, which previously owned the twin-unit Susquehanna nuclear reactors before spinning them off to new owners, also criticized the bill’s sponsors in a blog post last month for creating an artificial “crisis” that requires swift action.

The Natural Resources Defense Council and other environmental groups distanced themselves from the bill in March for doing “nothing to advance the deployment of renewable energy." NRDC on Wednesday said the new bill was “nothing more than a band-aid fix” for nuclear power.

“This legislation is just as deeply flawed and troubling as the House bill introduced last month," said Mark Szybist, NRDC’s senior attorney for climate and clean energy. “It props up nuclear plants regardless of profitability – and despite creating some headroom for renewables, that space is as likely to be filled by nuclear plants in Ohio.”

But a group of climate scientists, led by James Hansen, former director of the NASA Goddard Institute for Space Studies, on Wednesday posted an open letter to Gov. Wolf urging him to support a nuclear rescue, highlighting a schism in the environmental community over strategies to roll back carbon emissions.

“The state’s nuclear plants generated 20 times more electricity than the state’s solar and wind combined in 2018,” said the letter, posted by the advocacy group, Environmental Progress. “Moreover, the intermittent nature of solar and wind mean that they cannot replace base-load nuclear plants. As such, when nuclear plants close, they are replaced overwhelmingly by fossil fuels, not renewables.”