From self-care to dumpling tours, Valentine’s Day is becoming more than flowers and chocolates

Fewer people are celebrating Valentine’s Day traditionally but more still plan to spend their money on some experience or event. So spending on the day is up.

The Valentine’s Day dinner tradition for Teresa Glass’ family is usually a night at Wegmans with the kids and a weekend fondue party with old neighbors. Meghana Sharma and her boyfriend are using the holiday as an excuse to head to Flushing, N.Y., over the weekend for their own dumpling crawl. Abbe Stern is throwing a “Galentine’s Day” self-care party for her girlfriends at the LUSH in Center City.

None of these Philadelphia-area residents are planning the traditional Valentine’s Day, as shown by the love-themed advertisements that say fancy dinner, flowers, chocolate, and jewelry are the best ways to proclaim how much you love a significant other.

Instead, they’re part of a growing number of people who may not say they are celebrating Valentine’s Day specifically but still plan to spend money in some fun way around the holiday.

“This just seems like a much more fulfilling way to celebrate our relationship,” said Sharma, 24, of West Philadelphia. She and her boyfriend of a year and a half have been trying to learn to make dumplings for about six months now and she said they’ve grown as a couple through cooking. “We’re just definitely more into experiencing new things together.”

Spending this Valentine’s Day is expected to increase 6 percent to $20.7 billion this year, breaking the 2016 record of $19.7 billion, according to an annual survey by the National Retail Federation and Prosper Insights & Analytics. But the spending seems to be increasing in nontraditional Valentine’s Day traditions.

While people still purchase the traditional roses, chocolate boxes, and jewelry, a quarter of people celebrating this year said they were looking to gift an experience to loved ones beyond a spouse or partner.

“It’s easier and easier to acquire stuff, but people are also saying I don’t need just stuff anymore,” said Barbara Kahn, a marketing professor at the University of Pennsylvania’s Wharton School. " That’s all part of some general trend and it would make sense that you might see it in terms of Valentine’s Day."

It’s smart of retailers to advertise to the array of people who may or may not have romantic plans on Valentine’s Day, Kahn added. The concept of sharing memories or experiences is a more “modern point of view” about people’s roles in relationships, whether that is a significant other or friend, and helps more broadly define what Valentine’s Day means to consumers.

Though people are spending more for Valentine’s Day, the percent of people celebrating has dropped when compared with a decade ago, the survey found. This year 53 percent of 18- to 34-year-olds planned to celebrate Valentine’s Day, down from 72 percent in 2009. 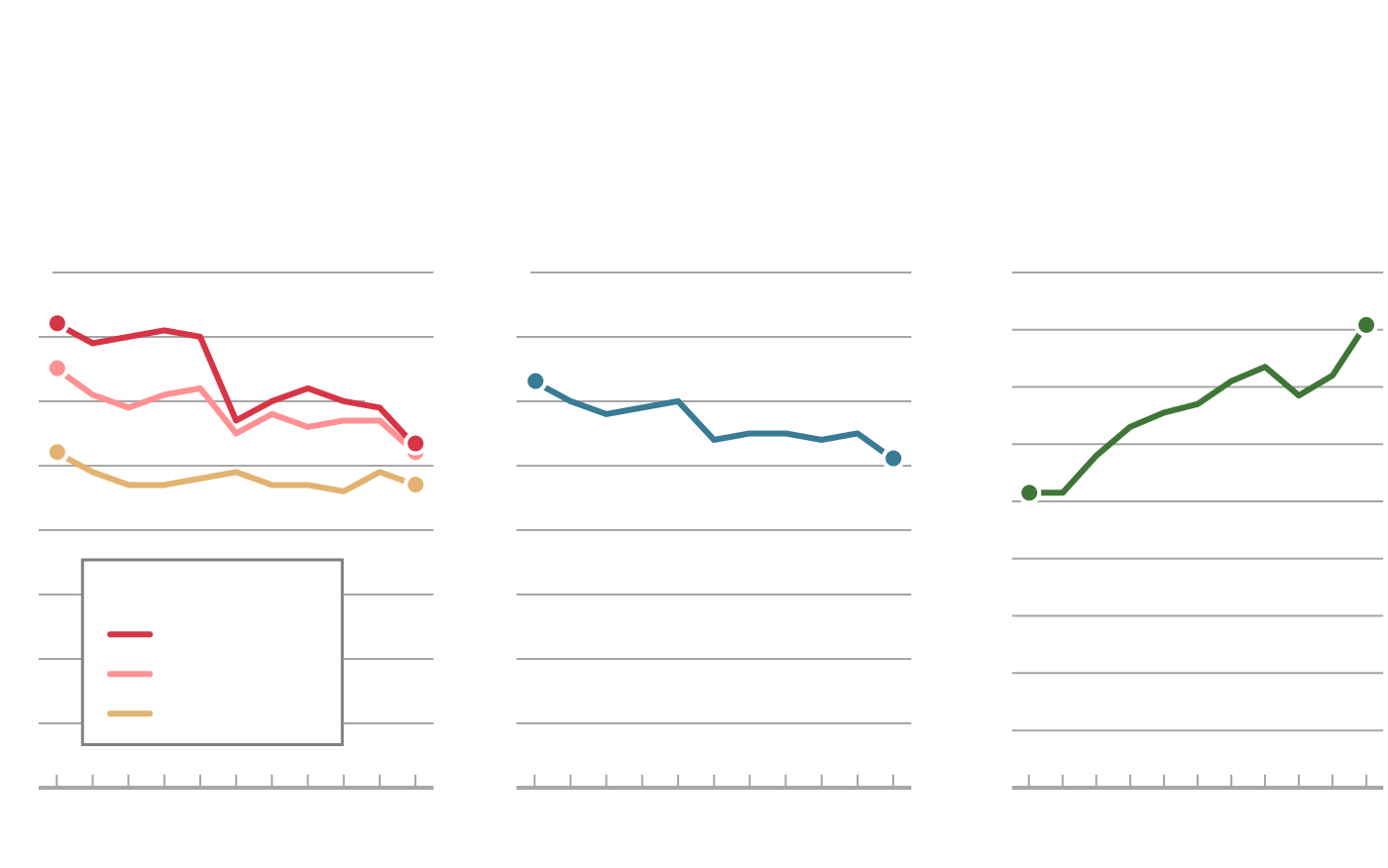 has fallen since 2009, especially among young adults ...

... but the average amount consumers plan to spend

on the holiday has risen by

57 percent over the same time.

The percentage of people celebrating Valentine’s Day has fallen since 2009, especially among young adults ...

... but the average amount consumers plan to spend on the holiday has risen by

57 percent over the same time. 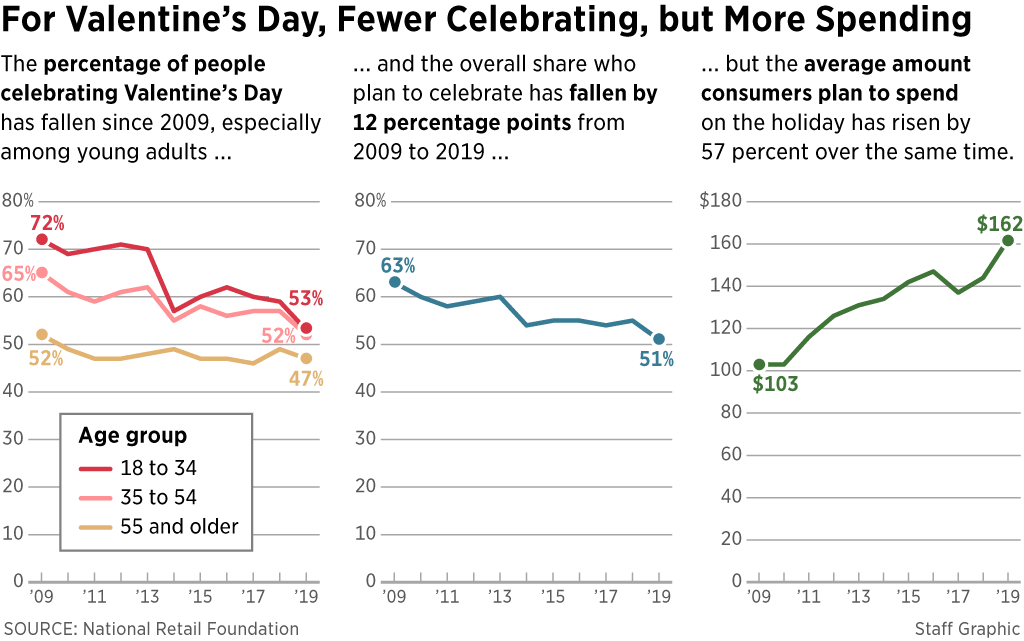 “I’m single. Usually single people hate this holiday, but I love it,” said Stern, 28, who lives in the Rittenhouse area. “It’s a reminder to celebrate love with everybody. It’s not about jewelry and chocolate and roses. It’s about what you do to love someone.”

Free People, one of the brands under Philadelphia-based URBN, has a special “Love Shop” on its website (the o in Love is a heart) with categories like “Love Yourself,” which features items like vibrators, oils and scrubs, and lace bralettes. There are also categories called: “Love Your BFF,” “Love a Night Out,” “Love a Night In,” and “For Him.”

Spending per person celebrating increased an average of $18.40, but only $4.26 of that increase came from spending on a significant other or spouse, the NRF found. The rest of the increase comes from gifts for other family members, friends, children’s classmates or teachers, coworkers, and pets.

“The vast majority of Valentine’s Day dollars are still spent on significant others, but there’s a big increase this year in consumers spreading the love to children, parents, friends, and coworkers,” NRF president and CEO Matthew Shay said in a statement. “Those who are participating are spending more than ever and that could be the result of the strong economy. With employment and income growing, consumers appear to be expanding the scope of who qualifies for a card or a box of candy.”

Sarah Waple, 36, of West Chester, and her husband don’t usually have the opportunity to do something for just the two of them on Valentine’s Day with hectic work schedules and two kids, an 8-year-old boy and 6-year-old girl. Still, they found a way to celebrate this week with a cupcake and beer pairing event Monday at Levante Brewing.

And on actual Valentine’s Day, the family will be skiing at Mad River Glen in Vermont for the second year in a row. It isn’t because of Valentine’s Day that they are taking this vacation, Waple said. It just worked out that this is when the kids have half days or are off from school.

“You can’t replace time spent with family members,” she said. Waple prefers to emphasize family relationships with one another “instead of filling our lives with stuff.”

Carolyn Longo’s Valentine’s Day tradition is focused on her kids instead of a romantic night alone with her husband or gift giving, she said. Every day this month, Longo, 42, of Media decorates her kids’ bedroom doors with a new construction-paper heart with a handwritten compliment or words of affirmation unique to them.

Longo said she and her husband have been focused on nonmaterial ways to show her children they love them, instead of buying little chocolates or toys for the holiday. After a few years of this tradition, Longo said, her son, 9, and daughter, 8, now expect to find these hearts on their doors in February and look forward to it.

On Feb. 14, she said, they are planning to just have a family dinner wherever the kids are in the mood to eat.

“A lot of times there’s a big focus on material things, and they’re privileged to have a lot, so I want them to know that sometimes the most meaningful things don’t cost anything,” Longo said. “We don’t like to put so much focus on giving gifts to each other on Valentine’s Day, so our gift is just spending it as a family.”