A fix for back pain? Scientists test bio-synthetic discs in goats.

The replacement discs for the spine are like "jelly donuts." University of Pennsylvania researchers are testing them in goats.

Of all the parts of the human body, the stubby little discs between the bones in the spine represent one of the more remarkable feats of nature’s design.

Consisting of tough, rubbery rings of collagen with jelly-like centers, they compress with every step we take. They twist. They flex. Over a lifetime of wear and tear, they replenish their supportive matrix of collagen despite having no internal blood supply.

“It is really a marvel of engineering,” said Robert L. Mauck, who as a biomedical engineer at the University of Pennsylvania, has the chops to say that.

So naturally, Mauck and a team of colleagues have attempted to recreate it in the lab.

That’s because nature’s design, though impressively rugged, does not last forever. With age, nearly everyone’s spinal discs degenerate to a degree, in some cases causing terrible pain. Lower -back pain was the world’s leading cause of disability in 2017, according to the Institute for Health Metrics and Evaluation at the University of Washington. In severe cases, patients resort to having vertebrae fused together, but they lose flexibility and often are not satisfied with the result. One-third come back for repeat surgery.

In late 2018, the Penn team published a promising study of what they hope is a better option: replacement discs made from a combination of synthetic materials and living cells.

So far, the researchers have implanted their discs only in rats and goats, but they appear to behave much like the real thing, said Penn Medicine orthopedic surgeon Harvey E. Smith, the clinical leader of the effort.

The results have impressed other researchers who are working on the same challenge, among them Lawrence J. Bonassar, a Cornell University biomedical engineering professor.

“Clearly, there is more work to do, but obviously these results are incredibly encouraging,” said Bonassar, whose team has reported success with implanting a different type of replacement disc in dogs.

It has taken more than a dozen years for the Penn team to get to this point, and a lot of varied expertise. In addition to engineers and orthopedists, the group includes veterinarian Thomas P. Schaer, a research director at Penn’s New Bolton Center, who joins Smith in implanting the experimental discs in the necks of goats.

Most of the study authors also are affiliated with the Crescenz VA Medical Center in Philadelphia, such as biomedical engineer Sarah Gullbrand, the lead author of the study, and some of their funding came from the U.S. Department of Veterans Affairs. That is because members of the military suffer especially high rates of disc degeneration and back pain, whether from combat injury or operating large machinery, Mauck said.

Bus and truck drivers also may be at higher risk of disc degeneration, as are cigarette smokers — likely because smoking harms blood vessels, and therefore discs, among many other body parts.

When a disc ruptures or collapses, pain can arise in several ways, though the cause is not always clear.

Shock Absorbers in the Spine

A tough, rubbery disc is located between each pair of vertebrae in the spine, cushioning the joint and allowing it to move. Nearly everyone's discs degenerate somewhat with age, in some cases causing terrible pain. University of Pennsylvania researchers are testing replacement discs in goats. They are made from biodegradable materials and living cells. 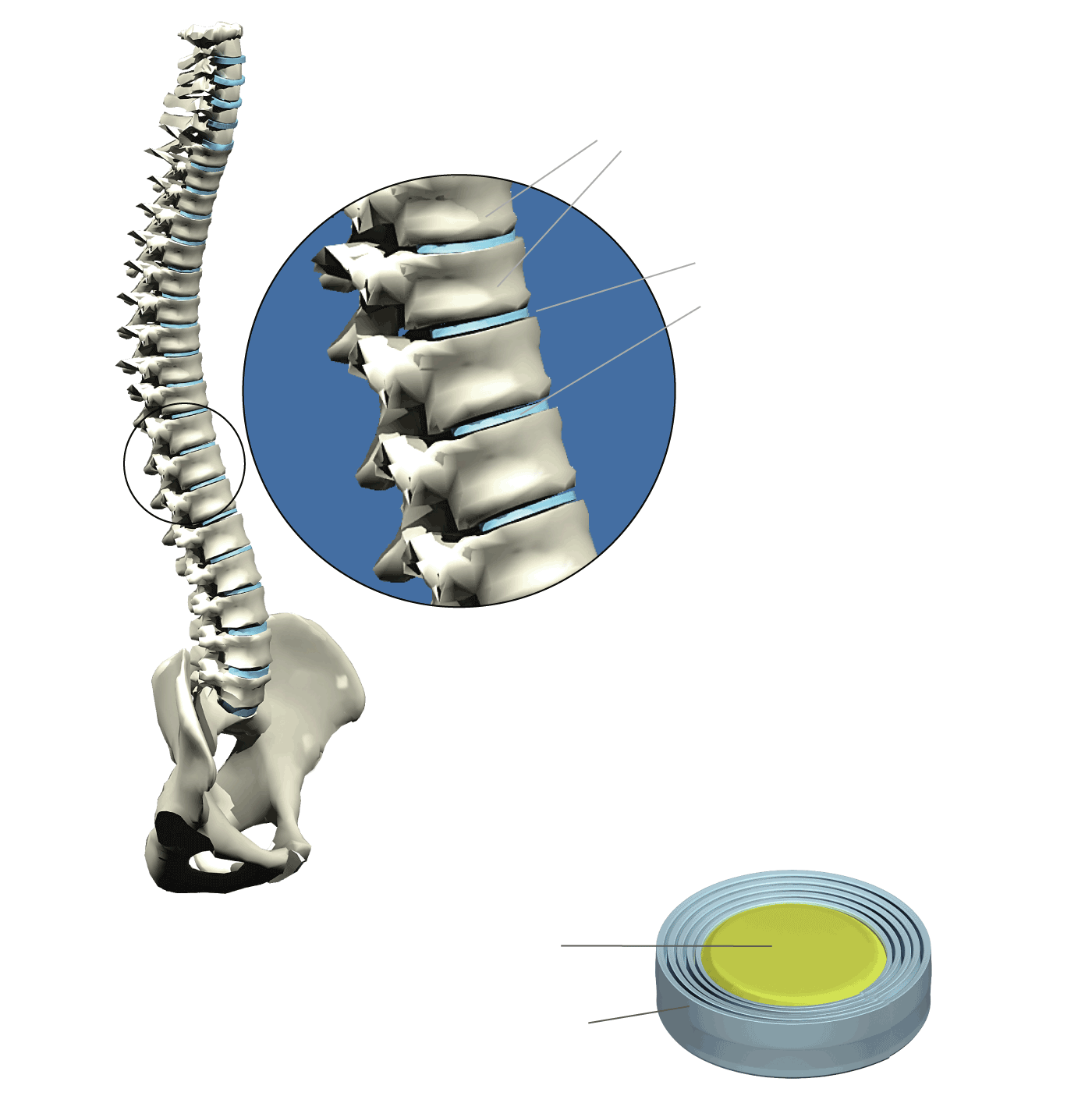 Sections of bone that make up the spine, joined together by the discs.

Tough, rubbery pads between each vertebra that allow spinal movement and cushion the spine.

The stiff outer layers are made from a biodegradable polymer, while the softer core is made with a sugar-like gel. Both parts are “seeded” with living stem cells, which produce collagen over time to replace the synthetic materials as they degrade.

Sections of bone that make up the spine, joined together by the discs.

Tough, rubbery pads between each vertebra that allow spinal movement and cushion the spine.

The stiff outer layers are made from a biodegradable polymer, while the softer core is made with a sugar-like gel. Both parts are “seeded” with living stem cells, which produce collagen over time to replace the synthetic materials as they degrade.

Nearby nerves can be compressed, causing pain to shoot down the leg — a condition called sciatica. If the failed disc is in the neck, similar pain can travel down the arm.

Less clear is how disc failure causes pain in the back itself, said Smith, an associate professor at Penn’s Perelman School of Medicine. Some of the pain may be a kind of warning signal: the body’s attempt to limit motion so that an injured back can heal. Inflammatory chemicals and swelling can play a role.

In some cases of disc rupture or herniation, back pain lasts for years. But in others, it goes away after a few months, though their MRIs may look similar to those patients who remain in great pain. And plenty of older people with degenerating discs never experience the pain at all.

“I could have someone who’s 60, and they have bone on bone, and they don’t have any pain,” Smith said.

(In still other cases, back pain is purely a muscular ailment, which may be alleviated with rest followed by exercise.)

For those who suffer disc-related pain, one option is fusion, in which the surgeon removes the damaged disc and inserts a piece of bone in between the vertebrae. That decompresses the nerves but the joint can no longer move, so there may be more stress on the vertebrae above and below it.

Another option is a replacement disc made of metal and plastic. Those allow somewhat more motion than spinal fusion, but they wear out, eventually shedding small particles of debris — which can trigger immune reactions such as inflammation. And unlike other joints that surgeons replace with metal-and-plastic devices, such as the hip, the spine is a less forgiving environment, said Cornell’s Bonassar. The fluid-filled hip joint is better able to clear out some of the bits of plastic and metal.

“In the spine, there’s no place for all these particles to go,” he said.

That is why the Penn team uses biodegradable materials to make its replacement discs: a sugar-like synthetic gel to mimic the collagen-based jelly inside a natural disc, and layers of a high-tech polymer to mimic the stiffer type of collagen that makes up the outer ring of a real disc. The polymer is made through a process called electrospinning, using electricity to draw out threads of fiber from a nozzle.

Also, as in nature’s design, the Penn team’s replacement discs are “seeded” with living stem cells, which produce collagen over time to replace the synthetic materials as they degrade.

“In the long run, it’s the cells we’re putting in that are going to maintain this living tissue,” Mauck said.

Something about discs in the spine seems to inspire comparisons with food. Doctors commonly liken them to jelly doughnuts, though they are much sturdier.

Describing its replacement discs, the Penn team sticks with a culinary theme. Gullbrand makes each one by hand, wrapping the outer layers of polymer more than a dozen times around the inner core of sugar-like gel.

“She wraps it sort of like you would wrap a cinnamon bun, almost,” Mauck said.

The completed disc is somewhat squishy at first, then becomes more rigid within weeks as its cells produce collagen.

“At first it’s like thick Jell-o,” Mauck said during a laboratory tour.

And after it gets stiffer?

The discs in goat necks performed well for the two months their progress was followed. The animals retained their normal range of motion and the discs resisted compression much like natural discs, the authors reported in their study. Next steps include implanting discs into more goats, which will be followed for two years, and implanting discs in the lower back of rabbits.

It will be years before Smith can implant replacement discs into his human patients. If it works, people would achieve relief from pain while maintaining flexibility. And maybe the surgeon and his colleagues will get to the core of why some people suffer pain and others do not.

“Back pain is sort of like the common cold,” Smith said. “Everyone has it. We know how to treat it. But we’re still trying to get down to the root causes. In terms of the fundamental science, we have a long way to go."

Tom Avril
I write about scientific research with an emphasis on findings that can impact everyday lives.