How Philly developer ‘Mr. Bigg,’ backed by Darrell Clarke, got a bargain on city land near Temple

Shawn Bullard, a local developer supported by Council President Clarke, got a great deal on city-owned land in a no-bid sale. Records of the transaction have gone missing.

Shawn Bullard, a former NFL linebacker and now North Philadelphia real-estate developer, describes himself as a “self-made multimillionaire” on Instagram, where he goes by the moniker “Zaddy.”

But when he purchased land for his latest and largest project – a four-story luxury apartment building near Temple University – the 37-year-old entrepreneur got a major assist from taxpayers, and Council President Darrell Clarke.

In 2016, the Philadelphia Redevelopment Authority (PRA) sold Bullard four adjacent lots on the corner of Cecil B. Moore Avenue and Willington Street for $92,500 each. Similar individual lots in the area were selling for two to three times that amount. A lot with an abandoned structure next door to Bullard’s properties sold for $251,500 in 2016.

Given the vacant lots sold to Bullard were city-owned, any break in price came at taxpayer expense.

Bullard, a former standout football player at Temple and aspiring rapper, was able to edge out at least seven other developers who had expressed interest in one or more of the properties because he had the support of Clarke.

While Clarke said he had no role in setting the price of the properties, his backing ensured that Bullard could buy the lots directly from the PRA without competitive bidding. Authority records show that the land was sold to Bullard “at the direction of the Councilperson."

A look at sales of comparable lots in the area suggests the lots could have gone for between $150,000 to $250,000 each through competitive bidding – or $600,000 to $1 million for all four. Even a city-ordered appraisal valued them higher than the price Bullard paid.

“The stark difference between the actual sales price and the appraised value is shocking and probably violated the policies that were in place at the time,” said John Carpenter, a former deputy executive director of the PRA now working as a consultant.

City officials have been unable to explain the price change, saying key records of the sale, including Clarke’s letter of support, have gone missing.

The Inquirer obtained a copy of Clarke’s signed letter of support for Bullard two years ago through a Right-to-Know request unrelated to this story. The original, however, has since disappeared from city records.

“There is no letter from the Councilperson in the file,” PRA spokesperson Paul Chrystie said.

Clarke spokesperson Jane Roh said her office, too, had no record of the letter.

Nor could the city locate the required documentation showing how the sale price fell below the appraisal, according to a city official familiar with the matter but not authorized to discuss it publicly.

In response to Inquirer questions about the Bullard transaction, Chrystie said last week that the PRA is “referring this matter to the Office of the Inspector General for further review so we can fully understand what occurred.” Inspector general Amy Kurland, whose office investigates fraud, corruption, and contract compliance, declined to comment Thursday.

Greg Heller, who as executive director of the PRA signed the deed to execute the sale, declined to comment, citing the ongoing review by the Inspector General’s Office.

A No-Bid Sale of City-Owned Lots, Backed by Council President

In 2016, Shawn Bullard purchased four lots on Cecil B. Moore Avenue near Temple University for $92,500 each. A letter of support from Council President Darrell Clarke — which city officials say has since gone missing — enabled Bullard to shut out other developers who wanted to bid on the properties. The city ordered an appraisal, but ultimately sold the lots to Bullard at a lower price. Records of that price adjustment are also missing. Nearby properties have been sold at significantly higher prices. 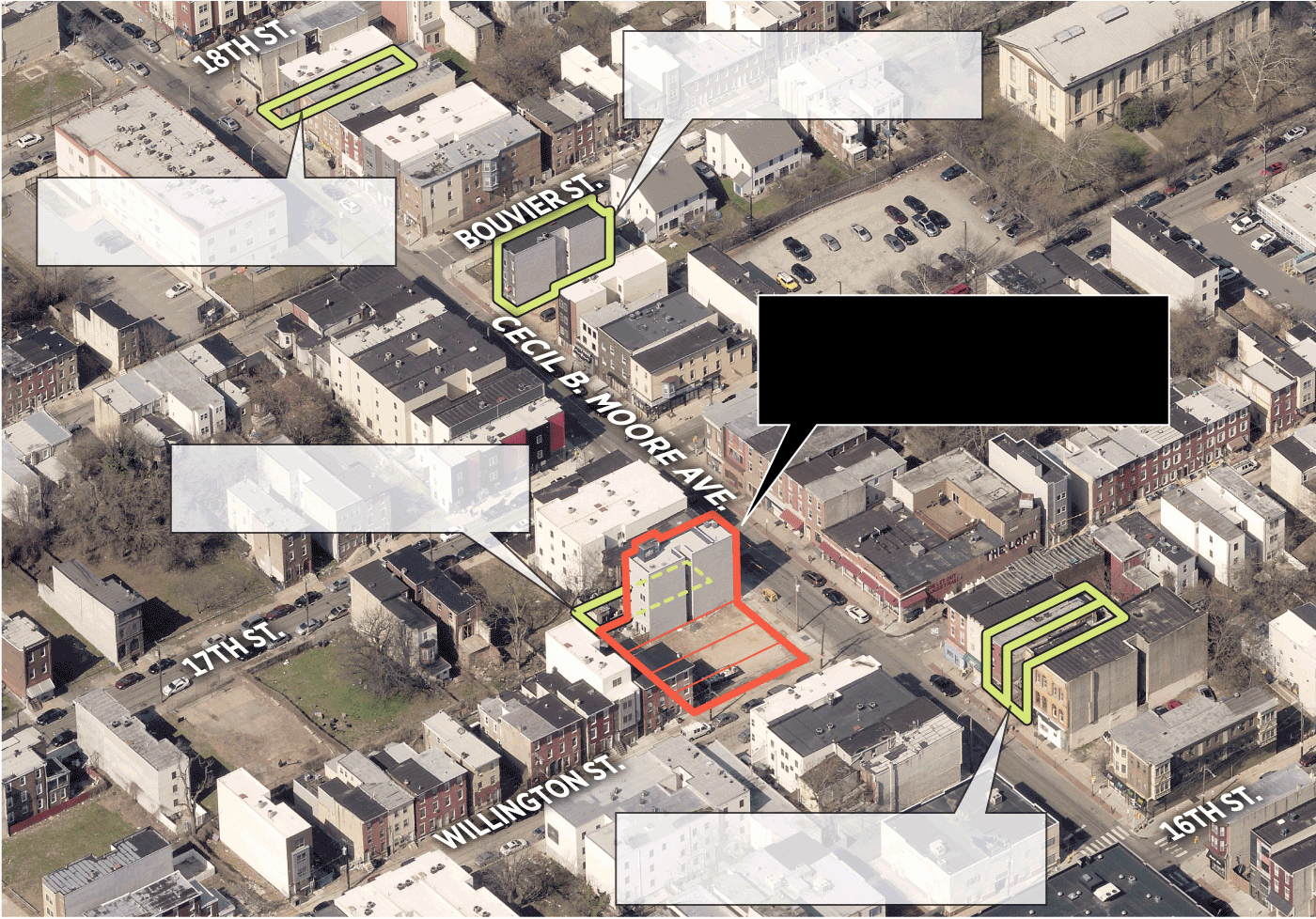 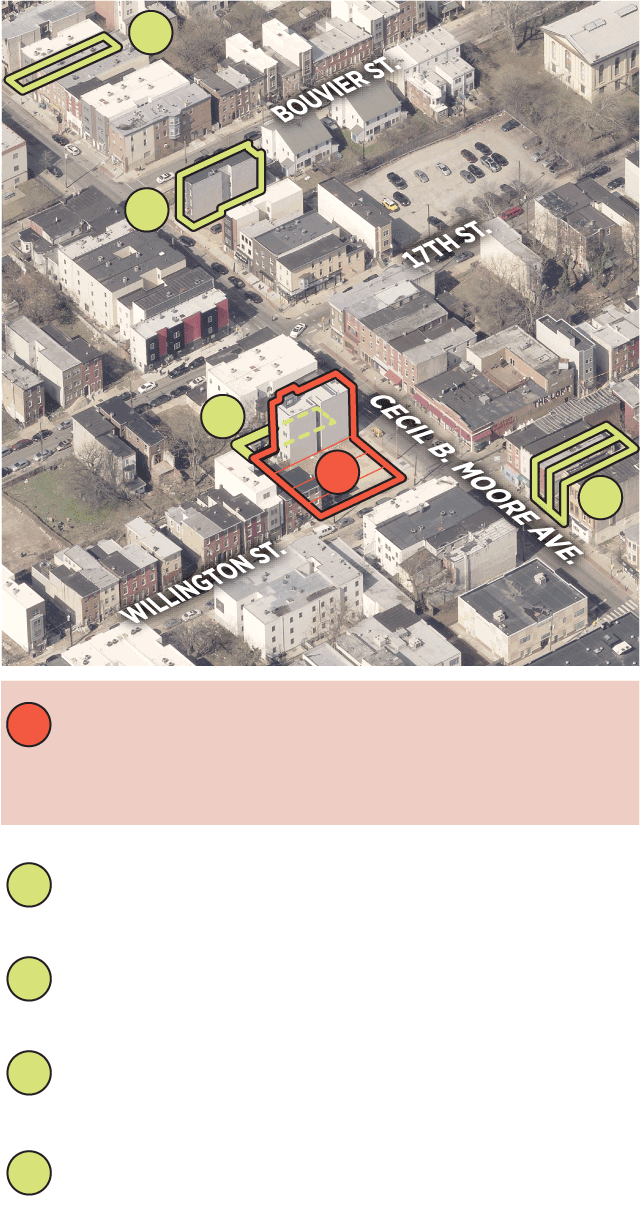 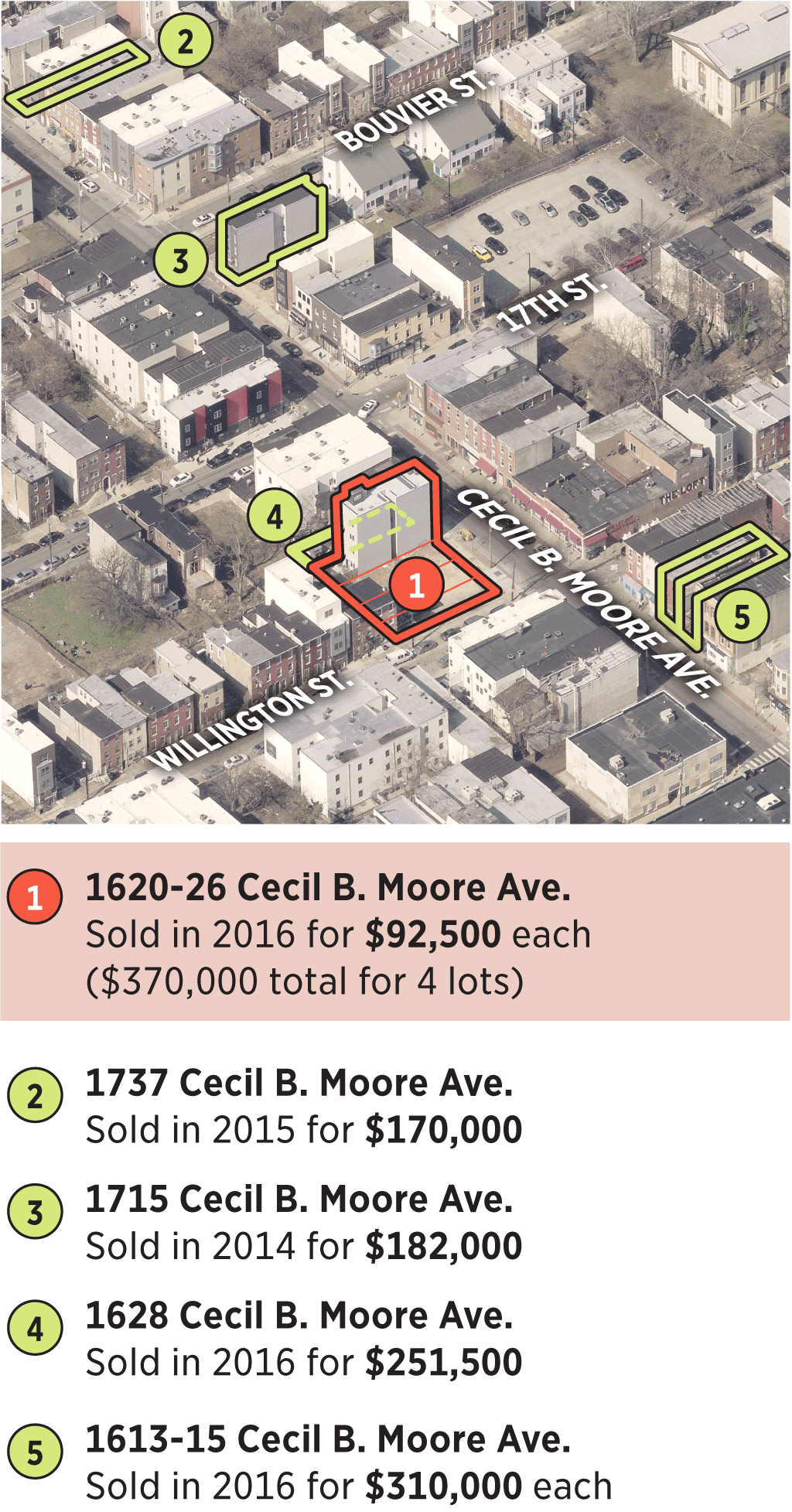 Bullard, who drives an Aston Martin luxury sports car and plans to launch a “Zaddy” line of men’s skin-care products, said he was able to negotiate the lower price by contending that $495,000 “didn’t make economic sense.” He said he did not remember whom from the city he talked to in order to save an additional $125,000 on the sale.

“As much as you guys might think [$370,000] is ridiculously low … that block is still in dire need of development,” Bullard said in an interview. “I’m not saying it’s not a good number,” he added.

Asked about his relationship with Clarke, Bullard said: “I don’t really know the councilman that well, to be honest with you. I definitely feel he’s doing a great job.”

Clarke apparently feels the same way about Bullard. In 2015, he authored a Council resolution honoring Bullard after he appeared on We TV’s Match Made in Heaven, a reality TV dating show. The resolution also lauded Bullard’s real estate work in the city and his youth mentoring.

The Council president’s support was critical to Bullard’s land purchase because, by law, the sale of city-owned lots must be approved by Council. Through the practice known as “councilmanic prerogative,” Council as a whole defers to the member whose district is impacted by a land deal. That essentially gives district members such as Clarke veto over development of public land in their areas.

Clarke described his support for Bullard as a routine matter and said he didn’t recall much about their limited interaction, which occurred several years ago.

“I recall him talking to me, like, way back,” Clarke said of Bullard. “He was this guy and he was saying, ‘Man, I’m a black guy, I’m trying to da, da, da, da’ – and this was a while back that he tried to get this property.”

Roh, Clarke’s spokesperson, speculated that other city officials may have lowered the price for Bullard because he inquired about the property years ago, or because he is a minority developer in an industry dominated by white men.

“If everything went to the highest bid, then lower-income, black developers, minority developers, people who don’t have a lot of capital to work with, they would never ever be able to complete a sale,” Roh said. “The city exercises discretion because we have an interest in balanced and equitable development.”

Philadelphia’s system for selling publicly-owned lots has long been problematic due to the disjointed and confusing policies of the city’s landholding agencies, and poor record keeping. As a result, some lots sit unused for years while others have been sold at a fraction of their value to developers with powerful backers.

The Inquirer reported in November that a friend of Councilman Kenyatta Johnson was able to make a $165,000 profit by quickly re-selling city lots he had purchased without having to competitively bid. Multiple other developers had expressed interest in the land, but were effectively blocked from making offers because of Johnson’s support of his friend.

Bullard, who briefly played outside linebacker for the San Diego Chargers and also raps under the name “Mr. Bigg,” frequently boasts online about his real-estate profits.

“I started young and now I’m ‘old Jewish man wealthy,’ ” Bullard wrote in an Instagram post this week to his 59,000 followers. “Start investing in yourself TODAY.”

City campaign-finance records show no contributions from Bullard to Clarke. Bullard, however, has been an outspoken supporter of President Donald Trump. He was one of 12 black Philadelphia community and business leaders who met with Trump in September 2016 for a well-publicized roundtable discussion meant to highlight black support in the then-presidential candidate.

Bullard drew the attention of the Department of Licenses & Inspections in 2013 when a construction worker was electrocuted and fell from the roof of an apartment building he owned on Montgomery Avenue near Temple. Records showed that the apartment was built without city safety inspections or a building permit.

“No inspections performed and all work done illegally and without permission from [L&I] North District to start work,” an inspector wrote in an L&I database in January 2014. “All work concealed from this office."

L&I spokesperson Karen Guss said Wednesday that Bullard was ultimately able to resolve the violations by submitting a report from a licensed professional engineer.

The city has taken Bullard or his companies to court for unpaid taxes and other L&I violations. The last of Bullard’s court cases appear to have been resolved in the spring of 2016, clearing the way for the PRA to sell him the properties on Cecil B. Moore Avenue.

On the Cecil B. Moore Avenue project, the PRA says Bullard has failed to show he is complying with an Economic Opportunity Plan ensuring that a portion of the construction work would go to minorities and women. Chrystie, the PRA spokesperson, said that the agency met with Bullard Wednesday and he agreed to come into compliance.

Bullard has so far developed one lot and opened the Common Grounds coffee shop there. A construction team has been working on the foundation for the three other lots. The artist’s rendering of the future building is impressive, and Bullard says it is scheduled for completion by the 2019 fall semester at Temple. He expects it to attract a mix of college students and “millennials that work downtown.”

“My vision and model may be different from others, as it is not about building a ‘cookie cutter,’ ‘builder grade’ building on lots, which, unfortunately, you see presented up and down the Avenue,” Bullard said in a follow-up email. “I wanted more for the Avenue and the community."

He plans to name the building "The Bullard.”