María Quiñones-Sánchez has accused her opponent of rigging the election before it's begun. State Rep. Angel Cruz calls her a bully who can't play nice with the party machine. Theirs will likely be the closest race on primary day May 21.

State Rep. Angel Cruz and Councilwoman María Quiñones-Sánchez have shared constituents for more than a decade. He represents a part of North Philadelphia in Harrisburg, she advocates for it in City Council.

But the two legislators hardly ever speak. They don’t pose for pictures at ribbon-cutting ceremonies. When they do interact, it’s almost always ugly.

“He’s been in Harrisburg 20 years. What has he done?” Quiñones-Sánchez, 50, said last week. “He’s put out these resolutions to nowhere and now he wants a promotion? ... He’s such a hater. He’s so miserable you can’t even be logical with him.”

It doesn’t end there. Cruz says Quiñones-Sánchez is out of touch, arrogant, and unable to work with ward leaders whose support, he argues, could make progress in struggling neighborhoods easier.

Quiñones-Sánchez says Cruz is part of a political machine known, particularly in North Philadelphia, for a history of corruption. She’s accused him of orchestrating voter fraud in the 2015 election.

“It’s the most volatile that I’ve seen it in a long time,” said former Congressman Bob Brady, who chairs the city’s Democratic Party. “It’s just negative, been like that for the longest time. If it was me and I was the elected official, I’d try to reach out and continue to reach out to people and see what their needs are.”

It could also be one of the city’s closest Council elections in the May 21 primary. Voter turnout is extremely low in the 7th, which is also the city’s poorest district, with the highest rates of violent crime. Four years ago, Quiñones-Sánchez won by fewer than 1,000 votes (out of 12,000 cast) against a far more controversial opponent. This time, Cruz, himself a ward leader, has the backing of eight of 12 ward organizations, which wield power in the district. 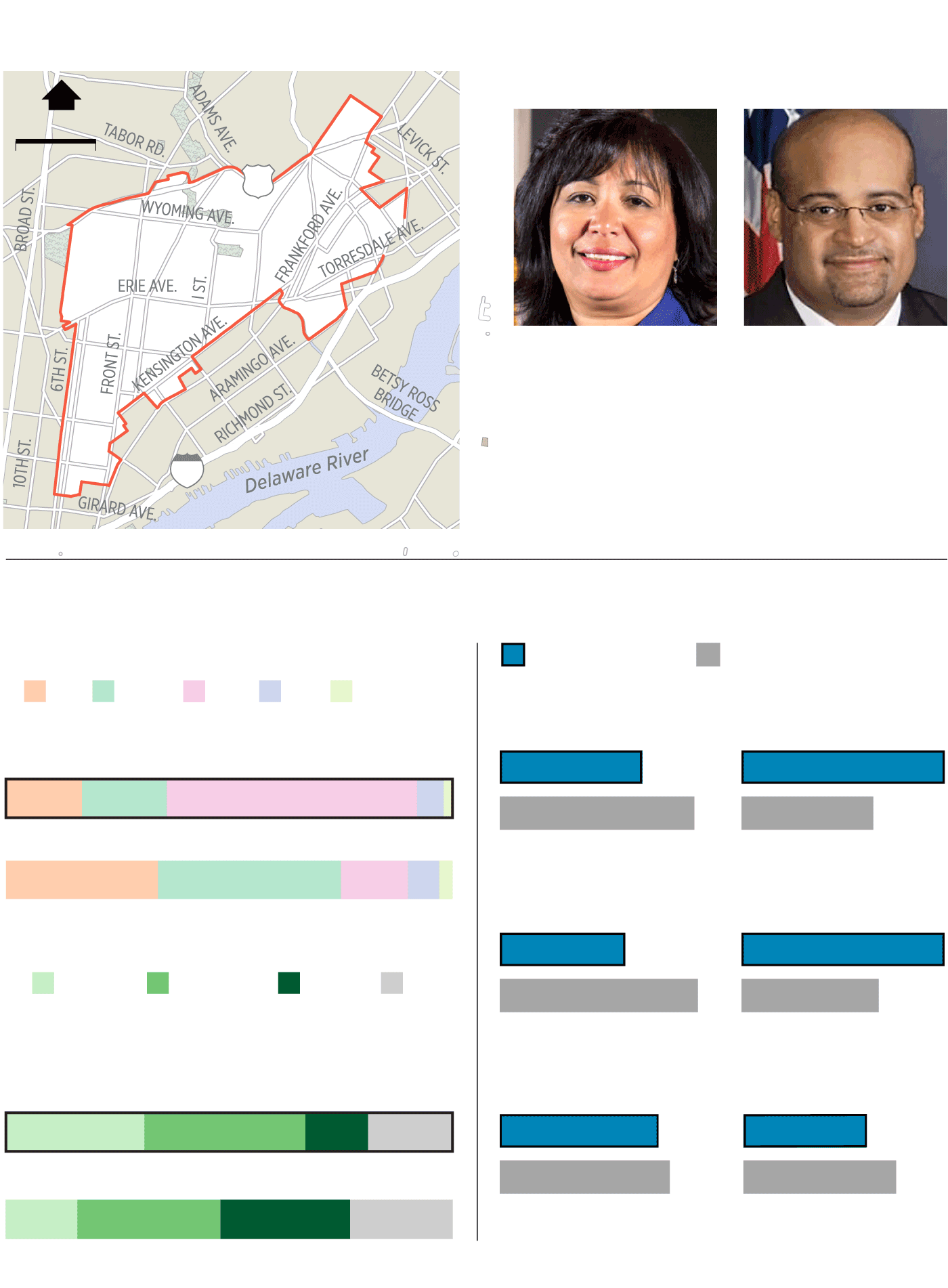 Seventh District at a Glance

for the 180th District

for the 180th District

“It’s remarkable to me that Maria, with all that she’s done, had as much trouble as she had last time,” said former Gov. Ed Rendell, who supports Quiñones-Sánchez, despite their disagreement over supervised-injection sites. "And the fact that it’s a competitive race this time, it’s symptomatic of the fact that these elections tend to be low-turnout elections where whatever’s left of the machine turns out the vote.”

An independent Democrat in a machine town

Quiñones-Sánchez was the first Latina elected to a district seat when she won in 2007. She has won reelection twice without the support of the party and is seen as one of the most independent members of Council.

She’s also been one of its most productive. In 12 years Quiñones-Sánchez sponsored small-business tax reform and ushered in programs to help poor residents pay off delinquent taxes and overdue water bills. She also sponsored the creation of the city Land Bank, to more efficiently sell vacant land, though it has been slow to take off.

In a city where Council typically votes in lockstep, Quiñones-Sánchez was among the few to vote against the so-called soda tax and has been an outspoken critic, recently introducing legislation to potentially repeal it. Her North Philadelphia district has several bottling plants as well as some of the poorest neighborhoods in the city, which reap the benefits of the tax in the form of pre-K programs and renovations to parks and recreation centers.

But Quiñones-Sánchez says she thinks both can be funded in other ways, like changes to the city’s 10-year tax abatement or by finding money in the existing budget.

On a ride around Kensington this month, Quiñones-Sánchez pointed to people shooting heroin as school was letting out. Young men dealt drugs openly on the sidewalk.

More than 1,200 people died of overdoses in Philadelphia last year, many in Kensington. But Quiñones-Sánchez opposes a single proposed supervised-injection site there. Instead, she wants the city to crack down on enforcement and devise a plan to get people who are addicted back to their families or into temporary homes.

She said she’s working with a lawyer to sue the city over what she sees as its failure to provide basic public safety to residents in the drug-ravaged areas.

“They claim they can’t 302 [involuntary commit] everybody, and I’m like, ‘OK, let’s go to court and find out what you can do,’ " she said. "We have incidents of people’s kids getting poked with needles. They’re concerned they’re going to violate people’s rights. What about long-term residents’ rights? Let’s go to court and define it. We’ll have a judge tell us what we can and can’t do.”

Quiñones-Sánchez chairs the Appropriations Committee and has considerable political support outside of her district. She says she’s focused on the primary but didn’t rule out a run for mayor in 2023. “It’s so far from here but when you look at who’s going to be running, am I as qualified as them? Yeah.”

Cruz wants to be the 'community’s councilman’

Cruz has been a state representative for 20 years. He defends a relatively light legislative record in that time by noting how hard it is for the minority party to advance bills in the Republican-controlled House, compared to a Council with a 14 to 3 Democratic majority.

Cruz said he doesn’t like the soda tax but won’t vote to repeal it unless there’s replacement funding. He also opposes locating a supervised-injection site in the district.

If elected, he said he’d focus on constituent issues. He wants a designated city-owned lot to serve as a place where people can dump their refrigerators, TVs, and larger items. He’s working on legislation at the state level to prevent illegal tire dumping. He also wants to tackle alleyways and litter.

“You might live in a poor neighborhood but you still need to have city services. We’re lacking that because she doesn’t have representation in her office of people who can come back and tell her what the neighborhood needs.”

If elected, Cruz said he’d give every ward leader in the district a job.

“This is not a one-man job,” Cruz said. “They can be the eyes and ears of needs of everyone in the district,”

Cruz is a proud cog in the city’s Democratic machine. He helped run the campaign of Manny Morales, who challenged Quiñones-Sánchez in 2015. Morales’ homophobic, racist, and misogynistic Facebook posts lost him the endorsement of the party, though he only lost the election by 900 votes.

Cruz is running largely on the premise that he can unite local leaders.

“I’m not perfect but at the end of the day I know how to walk into a room and not get kicked out of it," he said. "And I’m not gonna kick people out.”

Quiñones-Sánchez has said that she believes the outside money that poured into Morales’ campaign -- a chunk from the International Brotherhood of Electrical Workers Local 98 — funded illegal voter assistance at the polls. She’s asked city commissioners and the district attorney to keep an eye on the race.

“People in this district don’t vote because they don’t trust the integrity of their vote,” Quiñones-Sánchez said.

Cruz says he’s running a clean campaign: “You bring the AG, you bring the feds. Come on in. Our doors are open. I got nothing to hide."