People weary of being linked to “the badlands” point to nonprofits like Taller and ask, “Why not talk about that?”

Nine colleges have accepted high school senior Andres Vasquez, neither a science geek nor a jock, but an artist of rare talent whose soul and eye were honed in a neighborhood that can inspire as much as it can dishearten.

The 18-year-old senior from Mariana Bracetti Academy Charter School puts in as many hours as he can after school in the studio at Taller Puertorriqueño, a Latino cultural arts center in Fairhill, the poorest neighborhood in America’s poorest big city. He loves doing anime art, a Japanese style of starkly colorful graphics. Vasquez is so taken with the form that he wants to move to Japan; he practices the language busing tables and washing dishes at a Japanese restaurant in Ardmore.

Tired of the drugs in a community infamous for them — his biological father was deported to the Dominican Republic for dealing — and weary of “seeing traumatic, violent things,” Vasquez is going to pick an out-of-town campus and disappear.

“The only thing good about this neighborhood,” he said one day at Taller, as he painstakingly mixed watercolors to create the correct shade of blue, “are programs like this that get kids like me out of here. Art helps me forget reality.

“I have seen the worst part of this city. And I don’t want to be here anymore.”

It’s a sometimes unavoidable byproduct of the work done at such places as Taller Puertorriqueño (which means Puerto Rican workshop) that a child is taught art and culture so well that he’s inspired to move away. The community then misses out on an exceptional person who may have helped repair it.

But Fairhill is a hard place. The poverty rate is 61 percent, compared with 26 percent citywide. Its median household income is just under $16,000 annually, census figures show, the city’s lowest. Once 90 percent Puerto Rican, the area is more diverse now, with Dominicans and Mexicans making up about 35 percent, Taller figures show. 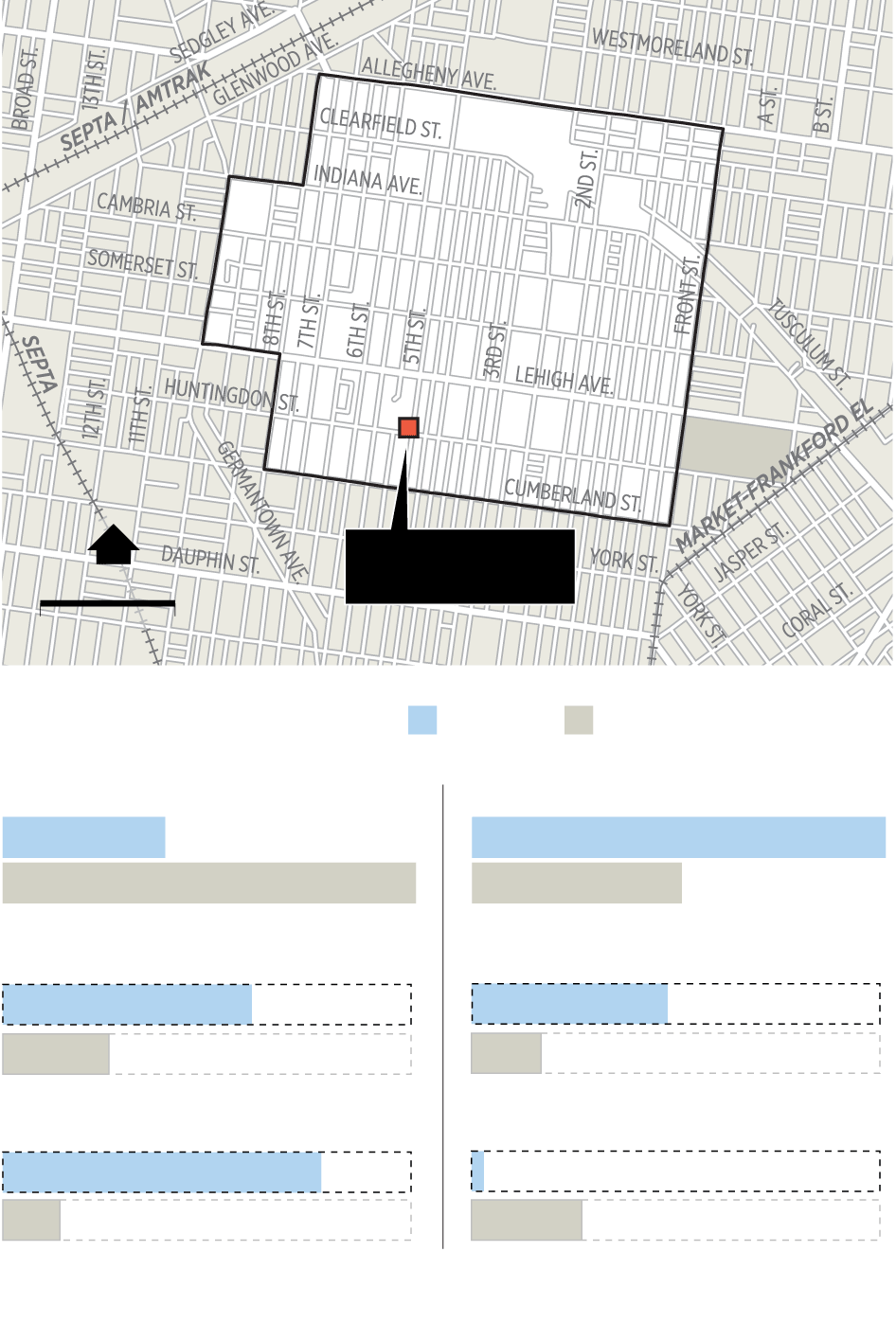 Fairhill at a Glance

Fairhill at a Glance

People weary of being called residents of “the badlands” point to such nonprofits as Taller — a 44-year-old institution that moved into a sparkling new facility on North Fifth Street two years ago with the help of city, state, and private funding — and ask outsiders, “Why not talk about that?”

Toting up what’s wrong with Fairhill “is seeing just one side of the coin,” said Carmen Febo San Miguel, a retired medical doctor who is Taller’s executive director. “There’s a lot of work that goes into supporting, stabilizing, and bringing resources to the community.”

She believes that learning art and understanding Puerto Rican culture help children develop “strong, internal selves to respond less to the pressures of the street and taking a quick hour to make some easy money.”

That’s the drug trade in Fairhill and neighboring Kensington she’s referencing, an economy brought in first by the Mafia, then the Colombians and Mexicans, according to law enforcement experts. That a young man without job prospects would hustle drugs in the area is not unusual, say cultural anthropologists. It’s akin to small-town folks who used to go to work in the local Ford plant or coal mine.

But San Miguel said she believes the majority of kids will make it without succumbing to the drug trade — “maybe 57-43, still a horrible statistic,” San Miguel said. “But teaching the culture contributes to the health of a community."

In all, San Miguel said, Taller touches a potential universe of 5,000 children annually. It sends art teachers into schools that no longer have art programs, reaching 2,000 students. An additional 150 take in-house classes. And as many as 3,000 kids from throughout the region take school trips and other visits to Taller, most of them involved in workshops.

Taller education director Marilyn Rodriguez grew up in Fairhill and decided to stay. A talented mixed-media artist, she took art classes at Taller growing up, and she earned a master’s degree in community arts from the Maryland Institute of Contemporary Arts in Baltimore.

“It’s important for Puerto Ricans growing up here to know their roots,” she said, her office decorated with, among other things, vejigante masks, folkloric Puerto Rican creatures with horns, fangs, and beaks. “Taller woke up a lot in me, and taught me I could speak through art.”

Her office also includes paintings Rodriguez made of what she describes as “bodies deformed and zombified from drugs — all about mental health and addiction.” The daughter of an alcoholic mother and five stepfathers, Rodriguez developed a hatred of drugs of any kind.

The drug dealers respect her, she said, “because I saw them all in Pampers.” When she angrily took a knife to a couch that marijuana sellers had set up in front of her house, the only response was from one of the boys who meekly said, “Sorry, Miss Rodriguez.”

Rodriguez paints on recycled material. The message, she said, is that anything can be transformed, in art or life: “If you had a bad childhood, you could better it.”

It may not always be easy. Daniel de Jesus, who oversees Taller’s youth artist program, said he’s aware that so much art in the area is made by children in trauma. He shows a painting of a headless young woman, arms crossed at the wrists, with a geyser of blood exploding out of her neck. Six disembodied eyes float like peeping fish around the figure.

“That girl experienced trauma,” de Jesus said, declining to offer details. “I create a space here that’s a sanctuary, with no judgment.”

That’s the strength of Taller, said David Chiles, executive director of Providence Center, a nonprofit community organization across the street from the art center. “Art is part of the healing of trauma and persistent stress,” he said.

“Art and physical exercise are key for kids in trauma, and they tend to be the first things cut in schools. Art is imagining something better for yourself.”

That’s how it worked for David Antonio Cruz, one of Taller’s most distinguished child artists, who went on to get a master’s degree in painting at Yale University and now teaches at the School of the Museum of Fine Arts at Tufts University in Boston.

“I learned so much growing up in the area,” Cruz said. “When people talk about Fairhill, it’s always focused on everything wrong and not working.”

But, he said, “areas like Fifth Street have electricity, always music, always food, a very alive sense of Puerto Rican-ness.” Of course, poverty brought difficulties. What a child from the area ultimately carries into adulthood, Cruz said, is the sense of overcoming hardship.

“It is part of you," he said. “I’m not scared of struggle, and there’s no time for excuses. Just work. And you will make things happen for yourself.”

Philadelphia Media Network is one of 21 news organizations producing Broke in Philly, a collaborative reporting project on solutions to poverty and the city’s push toward economic justice. See all of our reporting at brokeinphilly.org.

Alfred Lubrano
I write about popular culture, the way we live, family, class, and poverty.