Cost of charity care doubled at Penn Medicine, thanks to Lancaster General

The cost of charity care provided by the University of Pennsylvania Health System more than doubled in fiscal year 2016, which ended June 30, but that was not because of a new approach at the Philadelphia region's largest system.

Penn Medicine acquired Lancaster General Health on Aug. 1, 2015. That system provided slightly more than $8 million worth of charity care in fiscal 2016, half of the Penn health system's $16.3 million total, even though it accounted for just $912.3 million of Penn's $5.3 billion in net patient revenue.

In fiscal 2015, Penn reported $7 million in charity-care costs, according to its audited financial statement.

The Cost of Charity

Health systems are ranked by net patient revenue for the year ended June 30. Figures are in millions. 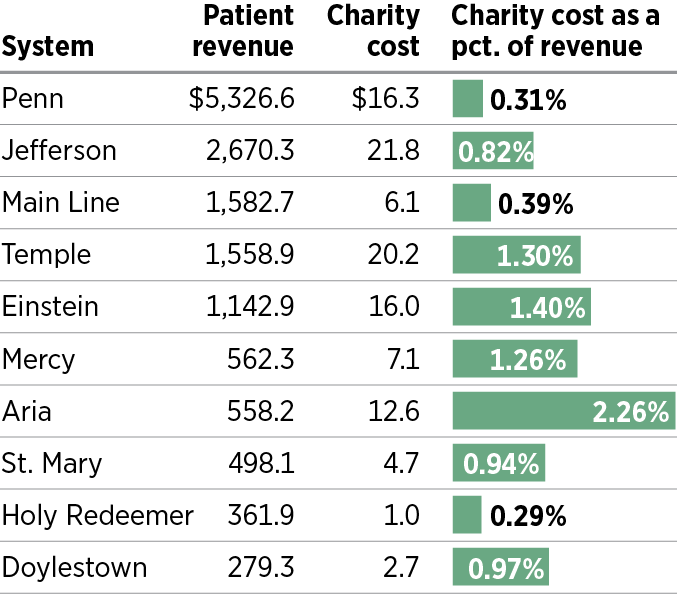 Excluding Lancaster General, Penn had the lowest percent of charity care relative to patient revenue in fiscal 2016 among tax-exempt health systems in Southeastern Pennsylvania that focus on adults. Overall, the cost of Penn's charity care equaled 0.31 percent of its revenue, slightly higher than the 0.29 percent at Montgomery County's Holy Redeemer Health System.

In New Jersey, charity-care reporting is complicated by a state program that subsidizes hospitals for the care, and that can sometimes result in a net gain from charity care because of a lag in the subsidy calculation.

Penn spokeswoman Susan Phillips said that the health system's level of charity care is affected by its significant efforts to enroll uninsured patients in Medicaid, which reduces charity care, and by its strict accounting for charity-care costs. That makes comparisons with other health systems difficult, she said.

The argument is that Penn's emphasis on expensive, complex care, such as transplants, reduces its cost of charity care as a percentage of revenue.

Accounting rules allow health systems to use a variety of methods to value charity care, which is one way nonprofit health systems justify their tax-exempt status to the Internal Revenue Service. Some use a complicated Medicare measure of costs. Penn uses a combination of internal accounting for costs and the Medicare cost ratio, but it is unclear what impact Penn's methodology has on the cost it reports.

In terms of dollars, the top provider of charity care in fiscal 2016 was Jefferson Health, whose $21.8 million total included the former Abington Health for the first time that year.

Aria, which became part of Jefferson in July, reported the highest percent relative to patient revenue. Its $12.6 million estimate amounted to 2.26 percent of revenue.

The cost of charity care at Aria fell 24 percent last year. The system likely benefited from the expansion of Medicaid under Gov. Wolf, as did Temple and Einstein, two major providers of charity care.

At Temple, the cost of charity care has fallen a third since fiscal 2013. Einstein's reported charity care fell 19 percent over the same period.

Sara Rosenbaum, a professor of health law and policy at George Washington University's Milken Institute School of Public Health, recently coauthored a study suggesting that the IRS should open the door to a wider range of community support, such as environmental issues and housing.

"What you would really like to see is that hospitals that don't have to put so much into uncompensated care or nominally priced services would begin to put some money into other things that would make their communities healthier," Rosenbaum said.