The craft beer stalwart, which began brewing in the 1980s, plans to open a new production space and taproom in a former tile warehouse at 2118 Washington Ave. sometime next spring.

Dock Street Brewing Co. was an early insurgent in the craft beer revolution that introduced America to sophisticated, small-batch suds.

Now it aims to be a pioneer in the revitalization of western Washington Avenue, currently a disheveled industrial artery running through the resurgent South Philadelphia neighborhoods of Graduate Hospital and Point Breeze.

The craft beer stalwart, which began brewing during the 1980s wave that also saw the birth of Samuel Adams-producer Boston Beer Co. and Brooklyn Brewery, plans to open a new production space and taproom in a former tile warehouse at 2118 Washington Ave. sometime next spring.

Dock Street president and cofounder Rosemarie Certo said she aims to help the corridor blossom into a bohemian-chic boulevard akin to the revitalizing area around its existing West Philadelphia location near 50th Street and Baltimore Avenue, which it will continue to operate.

With its proximity to University City, western Center City and the thriving culinary scene along East Passyunk Avenue, "Washington Avenue is the best street in South Philadelphia," she said. "Why would anyone not want to be here?" 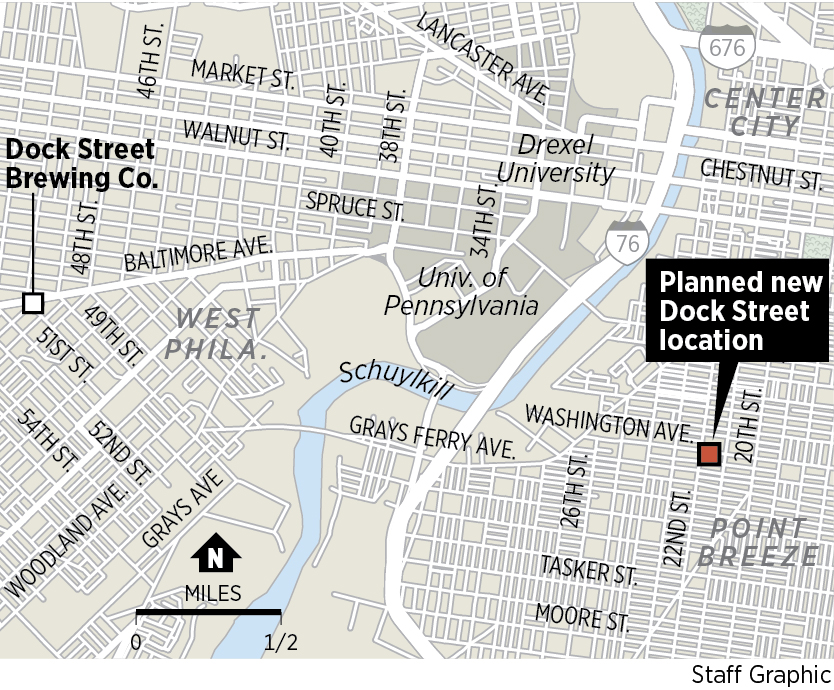 Real estate observers have long recognized craft brewers as a catalyst for the rebirth of blighted industrial districts.

Small-scale brewers rarely have the capital to set up shop in areas with expensive rents, given the high costs of equipment and other start-up needs, said A.J. Paniagua, a Carlsbad, Calif.-based research analyst with real estate services firm Colliers International.

"As long as they have a roof over their heads, they can work with whatever space is given to them," said Paniagua, coauthor of a 2015 report that found growing demand among brewers for industrial properties. "They're a little more able to adjust to rundown space than other users."

In Philadelphia, Yards Brewing Co.'s previous location in a former industrial building near the Delaware River at Poplar Street made it an anchor to the neighborhoods of Northern Liberties and Fishtown as they evolved into some of the city's hottest real estate markets.

In its current location at a former warehouse at Fifth and Spring Garden Streets, Yards is now part of a constellation of new beer makers that are helping to enliven the long-moribund industrial district north of eastern Center City. Others include Love City Brewing Co. and Roy-Pitz Barrel House a few blocks to the west.

"Breweries are neighborhood changers," said Thomas Donatucci, whose family's Washington Avenue property holdings include Dock Street's future space. "Out with the tile stores and kitchen cabinets, and in with things that serve the neighborhood and build the city."

Dock Street will have some company on western Washington Avenue as a harbinger of change.

Across the street from the brewery's future building, which it will share with robotic-drone developer Exyn Technologies, developer Ori Feibush plans a complex of apartments, rowhouses and stores across two blocks, one of which is being cleared of a historic candy factory building to make way for the new construction.

Chick's, a restaurant and bar between 18th and 19th Streets, has been a popular addition to Washington Avenue since opening in April 2017, while a new development of about 100 apartments and townhouses with about 10,000 square feet of retail space is rising at 25th Street.

While projects involving residential construction along western Washington Avenue require variances from its industrial zoning, the Dock Street brewery — as a production facility — requires no such special permission.

Certo said her company's entire canning operation will move from the 6,500 square feet that it occupies in a former West Philadelphia firehouse and adjacent buildings to the 10,300 square feet it will lease from Donatucci on Washington Avenue.

While Dock Street will continue to produce specialty and limited-run brews, such as its Jip the Blood weissbier and its Nino's Prickly Pears gose, in West Philadelphia for on-site consumption and keg sales, most production will shift to South Philadelphia.

Through the expansion, Dock Street aims to ramp up production capacity from about 2,000 barrels (equivalent to 4,000 kegs) a year to around 9,000 barrels, including a small amount it has brewed under its label at a facility in Pittston, near Wilkes-Barre. (Philadelphia's biggest brewer Yards, by comparison, has capacity to brew 100,000 barrels a year at its new building.)

Dock Street's increased production is aimed at better saturating the Pennsylvania and New Jersey markets where it already has a presence, Certo said.

The Washington Avenue expansion will also mark Dock Street's return to the eastern side of the Schuylkill after it closed its original location on the ground floor of the Two Logan Square office building at 18th and Cherry Streets in 1999, shortly before Certo and cofounder Jeffrey Ware, then her husband, sold the business.

A few years after selling Dock Street, Certo bought back the brand and had beer produced under the label at an outside brewery until the 2007 opening of the West Philadelphia brewpub, which was expanded last year.

The opening of the Washington Avenue location will mark the start of a new chapter for the business, and the South Philadelphia street, she said.

"It's an area that's ripe for innovation and rebirth," she said. "It all kind of goes hand in hand."