More cars, more containerized freight, and more cargo such as wood pulp and lumber will all be arriving on larger ships and creating more jobs.

The Port of Philadelphia is getting its first major capital investment in four decades for terminals, wharfs, and cargo cranes, with a $300 million cash infusion from the Wolf administration. The state is landlord and owner of 16 piers and terminals on the Delaware River.

For the region, the improvements will position Philadelphia to attract new shippers that currently go to rival ports in New York and Baltimore.

“These are as big as the cranes at the New York harbor. We’ll be able to compete with anyone on the East Coast

The old cranes at Packer Avenue Marine Terminal, the port's main container terminal, date from the late 1960s and '70s, and can reach only 17 containers across, said Jeff Theobald, the Philadelphia Regional Port Authority's chief executive officer. The new "post-Panamax" cranes – the first two will arrive in October and two more next year – can reach 23 containers wide.

The Port of Philadelphia is getting a $300 cash infusion from the Wolf administration to upgrade ship berths, buy new cranes, and update and relocate warehouses. The activity is expected to double cargo-handling space and create 2,000 waterfront jobs, and nearly 7,000 total jobs for truckers, rail workers, suppliers, and port-related businesses. 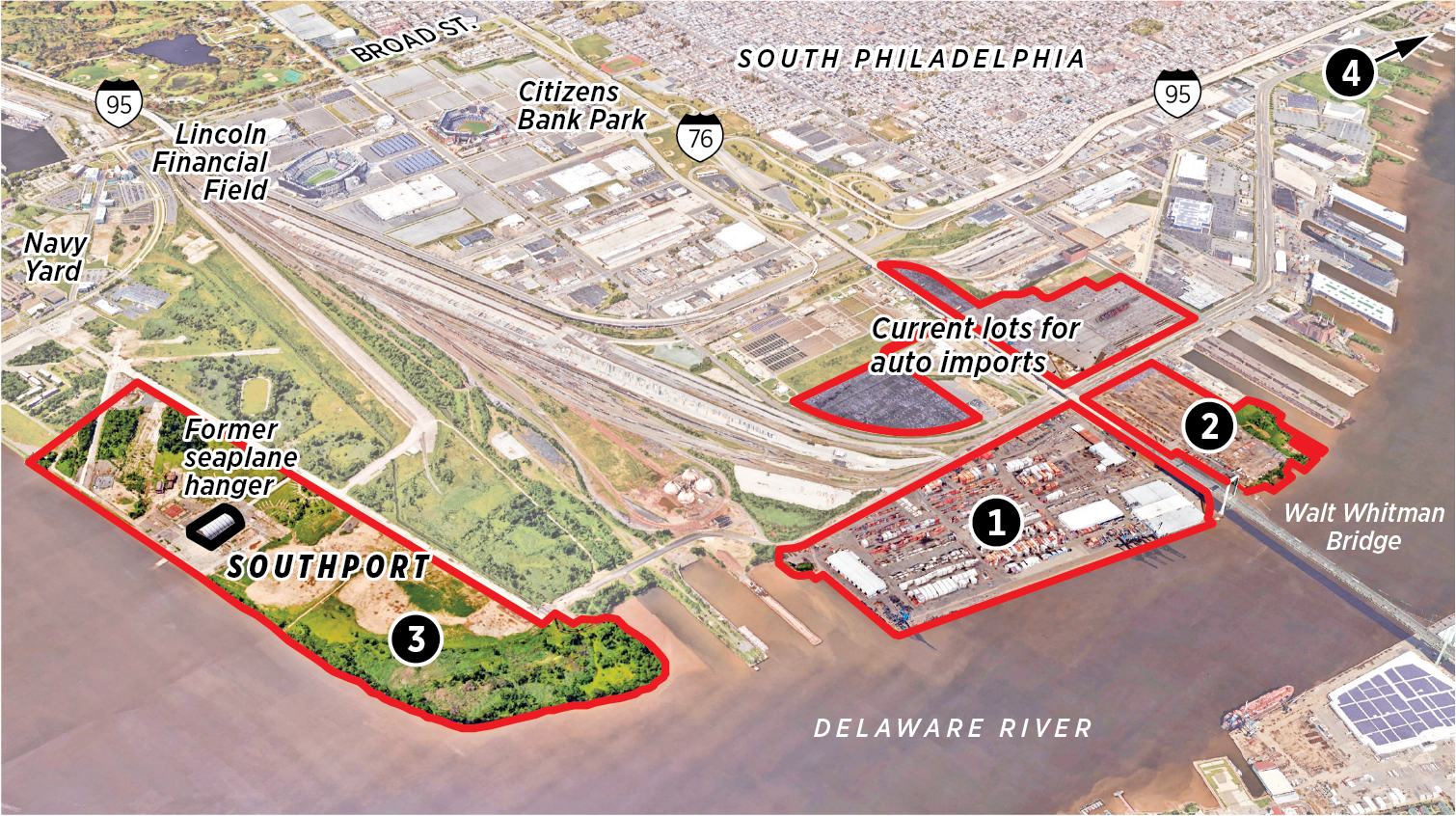 A $188 million state investment is expected to nearly double cargo business, from 456,000 to 900,000 containers annually, through:
• Deepening berths from 42 to 45 feet, in line with the Delaware River’s main navigation channel, to accommodate larger ships.
• Installing four “post-Panamax” container cranes, the world’s largest.
• Strengthening and improving berth infrastructure.
• Demolishing warehouses on docks to increase acreage for cargo handling, and building new warehouses nearby.

Another 40 acres will be added for handling container cargo.

A $93 million state investment at the Southport site at the Navy Yard will provide 155 additional acres for autos, increasing annual imports from the current 155,000 to 350,000. A former seaplane hangar will be converted into a second auto-processing center.

"These are as big as the cranes at the New York harbor. We'll be able to compete with anyone on the East Coast," he said.

Gerard "Jerry" Sweeney, the port authority's board chairman, said, "We didn't have a lot of the tools to aggressively attract new business. Quite frankly, the port has been very fortunate to be able to hold on to the business it's had and grow it incrementally.

"The governor saw a real opportunity to give the port, finally, the right tools so that we could become competitive and market the port to bring business in from other ports, and be in a position for a trans-Pacific line that never would have looked at Philadelphia before because we couldn't handle it."

Sweeney, who joined Theobald to talk about the port as an economic engine to drive jobs, said Philadelphia will "now be in the mix with New York, Baltimore, and Norfolk. We have great access to the Northeast markets by rail and highway, and a better labor force." 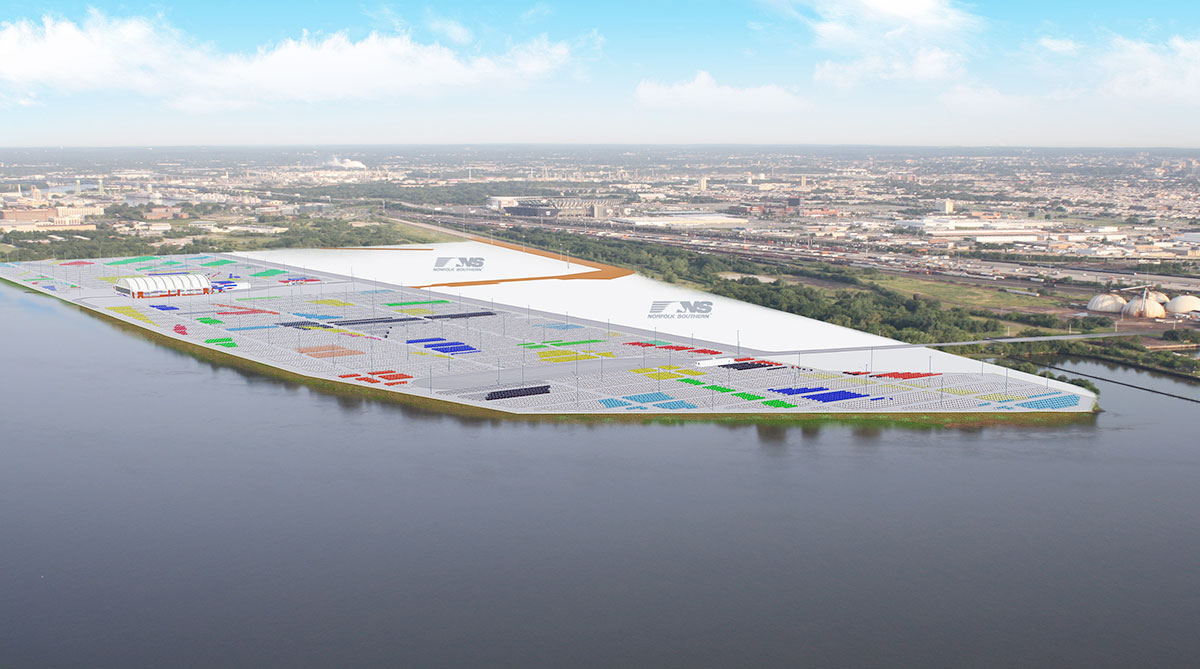 Philadelphia Regional Port Authority
Artist's conception of 155 acres of improvements at the Southport site at the Navy Yard for automobile processing for Hyundai and Kia vehicles that arrive at the Philadelphia port before they go to dealer showrooms.

Remaking the port and river

Philadelphia is already on some shippers' radar. Containerized freight in 20- and 40-foot boxes was up 39.6 percent in the last 12 months, and shot up 85.9 percent in February compared with February 2016, said research firm Panjiva, which tracks commercial shipments worldwide.

The container increases, attributable to several new shipping services at Packer, pushed the Philadelphia port's national ranking up to No. 12, just below Miami and ahead of New Orleans. The nation's largest port for container handling is Los Angeles-Long Beach, in California.

Until the recent surge in container volumes, Philadelphia port ranked No. 16, Panjiva said.

Soon there will be another new shipping service. Hapag-Lloyd, Germany's top container line, and four Asian carriers have formed a vessel-sharing alliance that will begin operations in April on 32 routes worldwide, deploying more than 240 ships and connecting 75 major ports, including Philadelphia.

The weekly service from Europe boasts "fast transit times, a comprehensive port coverage, and deployment of modern and most-efficient ships," according to an announcement on carrier NYK Line's website. The route will begin in Bremerhaven, Germany, with stops in Antwerp, Belgium; London Gateway; Norfolk; Philadelphia; New York; and Halifax before returning to Bremerhaven. 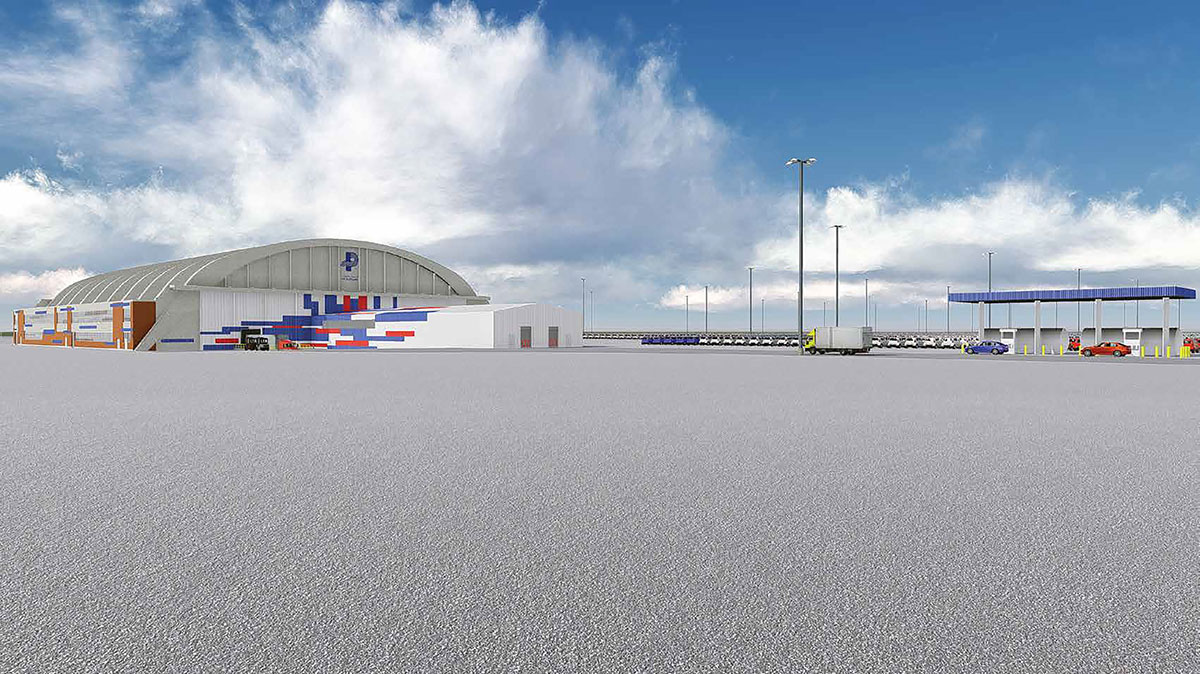 Philadelphia Regional Port Authority
Artist's conception of improvements to a seaplane hangar at the Southport site at the Navy Yard that will be used for automobile detailing for Hyundai and Kia cars arriving at the Philadelphia port. Car imports are expected to increase from 155,000 annually to 350,000.

Called the Alliance, the partners are "K" Line, Mitsui O.S.K. Lines, Nippon Yusen Kaisha (NYK), Yang Ming Marine Transport, and Hapag-Lloyd. All but Hapag-Lloyd will be new to Philadelphia.

"We are working on what may become the port's largest customer," said Tom Holt Jr., the Packer terminal operator.

With the 103-mile deepening of the Delaware River navigation channel nearly completed, and the Panama Canal expanded to handle 9,000 to 13,000 TEU vessels (20-foot equivalent unit,  the standard size of international containers), some of those bigger ships are coming up the Delaware.

With the cranes Packer already has, "we will have effectively six cranes that can work these larger vessels, which bring in more cargo, which creates more jobs," Holt said. "It truly is a ripple effect, and that is the benefit of these port jobs, blue-collar jobs. The guys make their money here in the river, and they spend their money raising their families in the region."

Boise Butler, president of International Longshoremen's Association (ILA) Local 1291, whose members unload the ships, said the current cranes "are not long enough" when the megaships come in. "We have to work half the ship, then take the vessel out in the river and turn it around, so we can work the other half.

"I thank the governor over and over for the $300 million for improvements," Butler said. "I'm hoping that, along with the state planning for expanding containers into the port, they keep their eyes on what's going on with our general cargoes at Tioga." 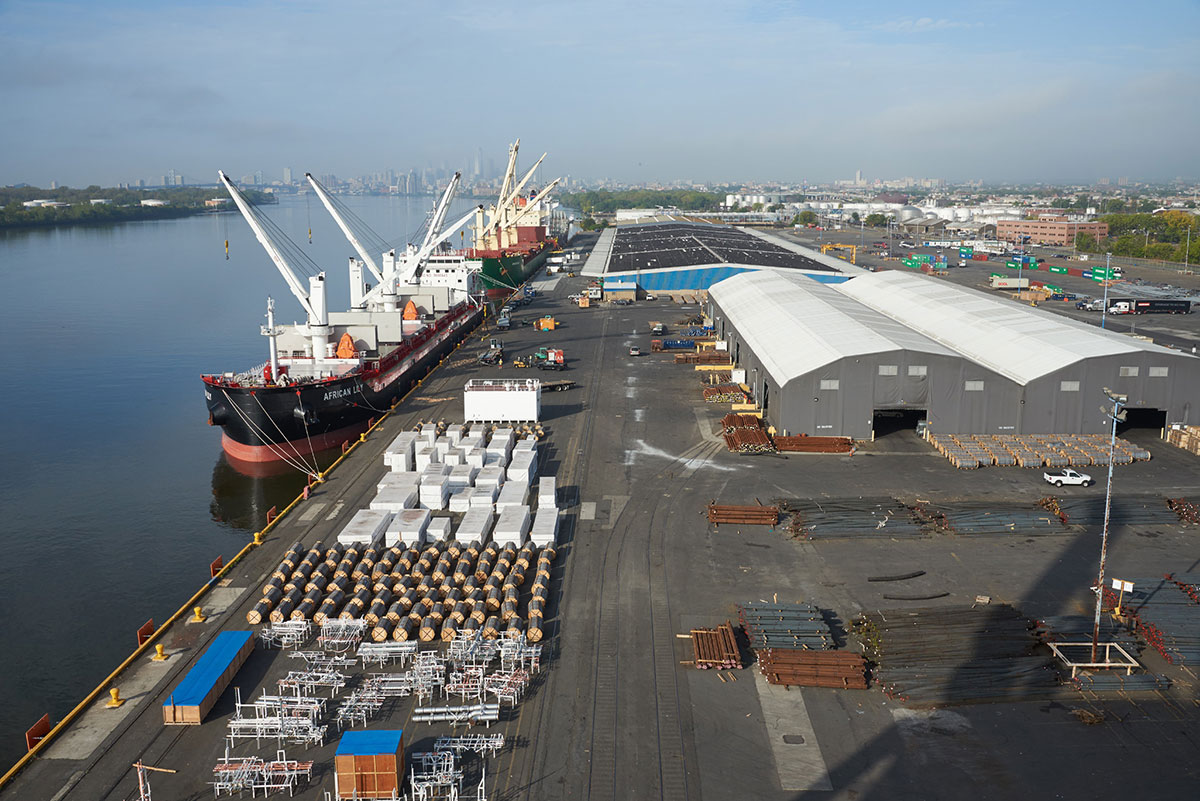 TODD TRICE
Tioga Marine Terminal in Port Richmond will get $12 million in warehouse improvements, a mobile harbor crane, and rail upgrades including a loading dock canopy.

Larger ships, new cargoes, and more jobs would not happen without the Delaware River channel deepening from 40 feet to 45 feet, begun in 2010 by the U.S. Army Corps of Engineers with Pennsylvania as the local sponsor.

"Without doing the dredging, we would be nowhere," Theobald said. "We couldn't compete any place on the East Coast. It really makes Philadelphia a relevant port."

Would 50 feet deep have been better? Yes, but after two decades, and lawsuits by environmental groups, and, at the time, opposition from New Jersey and Delaware,  only a 45-foot depth could be agreed upon.

"The reality is we should have gone to 50 feet," Sweeney said. "But at 45 feet, we can access 85 percent of the world's shipping traffic. Given where our market share is today, there's plenty of runway at the 45 feet."

In addition to $188 million on upgrades at Packer, $93 million to expand automobile-processing at Southport, and $12 million for improvements at the Tioga Marine Terminal, the port authority has restructured to become "a more efficient, quicker, and nimbler organization," Theobald said. Twenty PRPA staff members recently took voluntary severance packages and four others got pink slips to reduce spending at the state agency.

"To me, when I got here, there were too many people for the work that had to be done," Theobald, who was the former CEO of Ports America Outer Harbor Terminal in Oakland, Calif., said. "And it was top-heavy also. We're a landlord, we're not an operating port."  With fewer people, "we're getting closer to being profitable; in other words, sustainable."

The PRPA board plans to aggressively market the port to shippers around the world "so that when they think about where to ship cargo they think Philadelphia," Sweeney said. 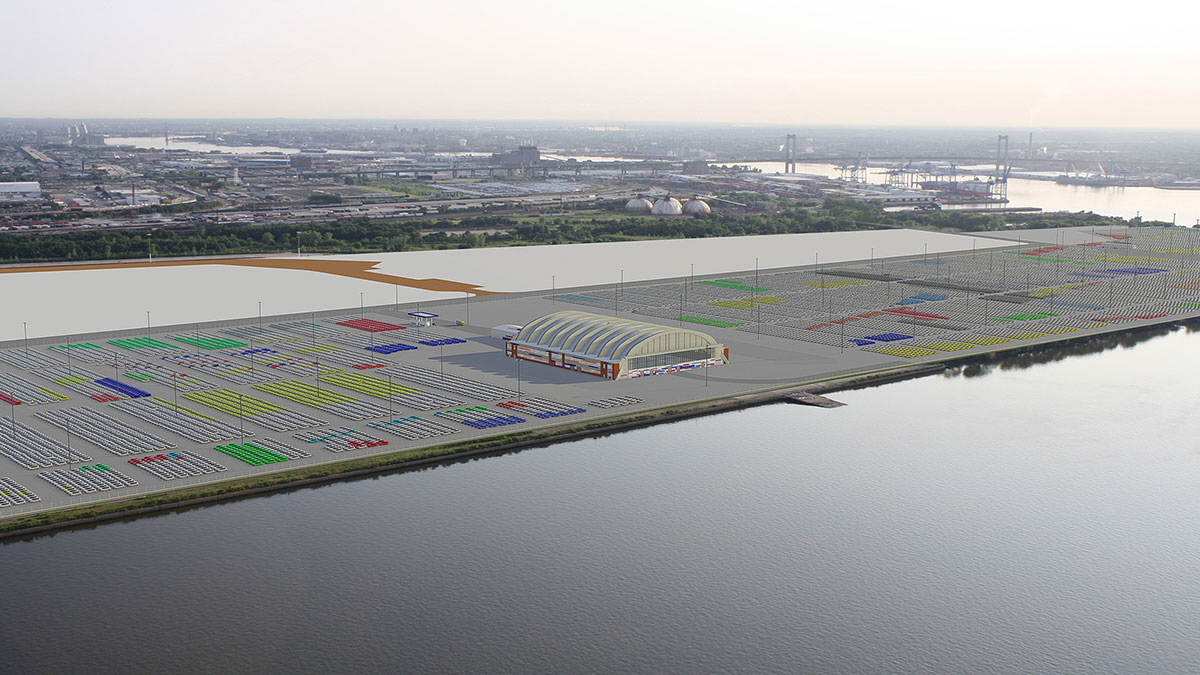 Philadelphia Regional Port Authority
Artist's rendering of auto processing facility on 155 additional acres at the Navy Yard for auto detailing and a car wash station for Hyundai and Kia cars that are headed to dealer showrooms.

To be more recognizable in international trade, the PRPA may change its name to something shorter – and catchier. The authority board has hired a Maryland company to review the port's marketing and "branding" with an eye toward a fresh image and attracting new business.

"It's a whole new day," Sweeney said.  "For the first time, we have significant capital that can have a definable benefit."

The future of the port

The state, which has renegotiated leases to market rates with tenants at Packer, Tioga, and the auto-processing operation, projects that annual revenue to the state will grow from $5.7 million to $18.9 million.

The decision to invest in existing port operations came in November, when the PRPA board suspended the bid process for the 195 vacant acres known as Southport at the Navy Yard. Although six groups initially expressed interest, five later dropped out. 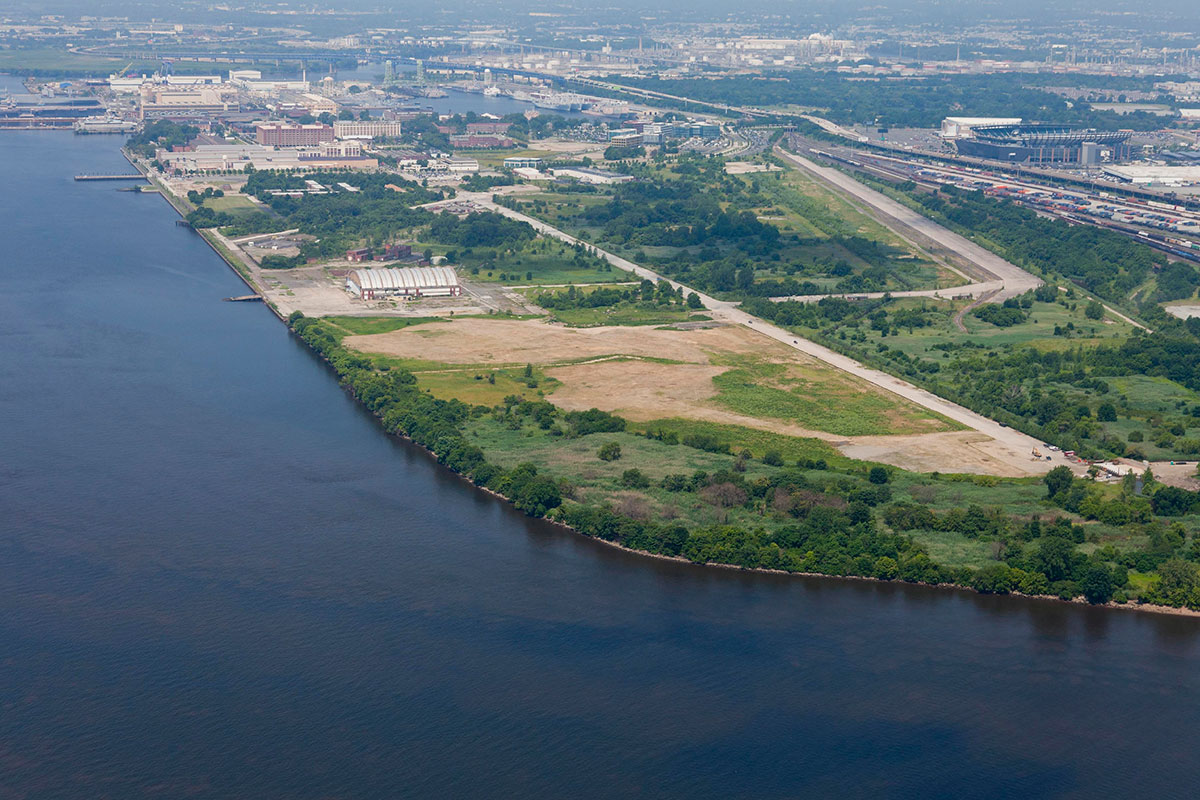 Philadelphia Regional Port Authority
Aerial view of the Southport site at the Navy Yard that will be used for automobile processing for Hyundai and Kia cars that arrive at Packer Avenue Marine Terminal in South Philadelphia before heading to dealer showrooms.

In April, the PRPA added a requirement that the developer of the 119 waterfront acres had to build a wharf and two ship berths, making the project more expensive — about $500 million.

The challenge for any private developer was to make a $500 million investment pay off when directly to the north was the Packer Avenue terminal, built in 1968 when the traditional model for constructing ports was by state-controlled port authorities that issued bonds, and found an operator to pay off the state's investment in rent.

With Southport, the state was looking for predominantly private money to construct a wharf and ship berths from scratch.

"The option, honestly, for the port was — do we leave that ground fallow at Southport until the container volumes pick up?" Sweeney said. "Or do we identify an interim use for that — i.e., the autos — which is very labor-intensive, a lot of Teamster jobs."

Autos are "a great job-growing strategy for the foreseeable future" that dovetails with the timeline for the port to grow the container business, he said.

John Martin, a national port consultant based in Lancaster, called it a "smart and cost-effective move" for the state to recognize the importance of the port and invest in "an asset that was there, but was in disrepair from an equipment standpoint and footprint."

While a new marine terminal at Southport has been the dream of many, including the ILA's Butler, "it's very difficult for the private sector to come up with that kind of money," Martin said.

Using Southport for cars will not hurt future flexibility to use the land for "something else as demand requires," Martin said. "Because cars are just basically a parking lot, and they bring in good processing jobs. They are labor-intensive in moving the autos. You are making money off something that wasn't making money before, and you are creating jobs."

Breakdown of the improvements