‘This isn’t Cherry Hill. This is the real South Jersey.’ Rambling along Route 49 on the way to the Shore

South Jersey's Route 49 may be less well-known than Shore highways like Route 40, Delsea Drive or the White and Black Horse pikes. But it's no less loved by those in the know

Nothing tastes like a homemade peanut butter milkshake from Pennsville Custard.

Even for breakfast. Especially if you're heading out for a tour of a less-than-famous but locally beloved South Jersey highway, where down-home dining and similar delights are the rule.

"This is Route 49," said Mike Hiltebrand, 60, a Salem County native who's something of an expert on custard, as the locals call soft ice cream — as well as the state route that pretty much connects the Delaware River and Atlantic Ocean.

"Besides a way to get to the Shore, 49 was a way to bring tomatoes to the can houses in Bridgeton," said Hiltebrand, who grew up and still lives on a 200-acre Pedricktown farm. "This whole area was huge for growing tomatoes."

"We used to go to Richman's Ice Cream after hymn sings," he recalled before shifting gears to another local custom.

"Muskrat houses [used in muskrat hunting] were all over these marshes. I used to hunt them on the farm."

Said his wife, Christine Andrusiw: "This isn't Cherry Hill. This is the real South Jersey."

Andrusiw and her husband took my colleague Maggie Loesch and me on a Route 49 sightseeing expedition last week between the small, history-rich but cash-poor cities of Salem and Bridgeton.

That's 26 miles each way through an easy-rolling countryside quilted with corn, soy, pepper and asparagus fields and criss-crossed with creeks and rivers with names like Cohansey.

Blink, and we'd have missed hamlets such as Stow Creek, or unpretentious businesses like Niblock's Pork Store, Matty's Crabs or even Pennsville Custard and its cousin, Hudock's.

Pronounced 'Who-Dox," it's the home of a burger called the bellybuster, which we'll get to later.

But first, "the best custard I've ever tasted," said Andrusiw as we waited for window service at Pennsville.

Sometimes called "the Yellow House" because of its bright lemon roof and cottage-like building, the stand opened in 1952, a year after the debut of the first span of the Delaware Memorial Bridge.

"This is the way it's always looked on the outside," said Penny Dalbow, who's managed Pennsville Custard for nearly three decades. "Nothing inside is different." 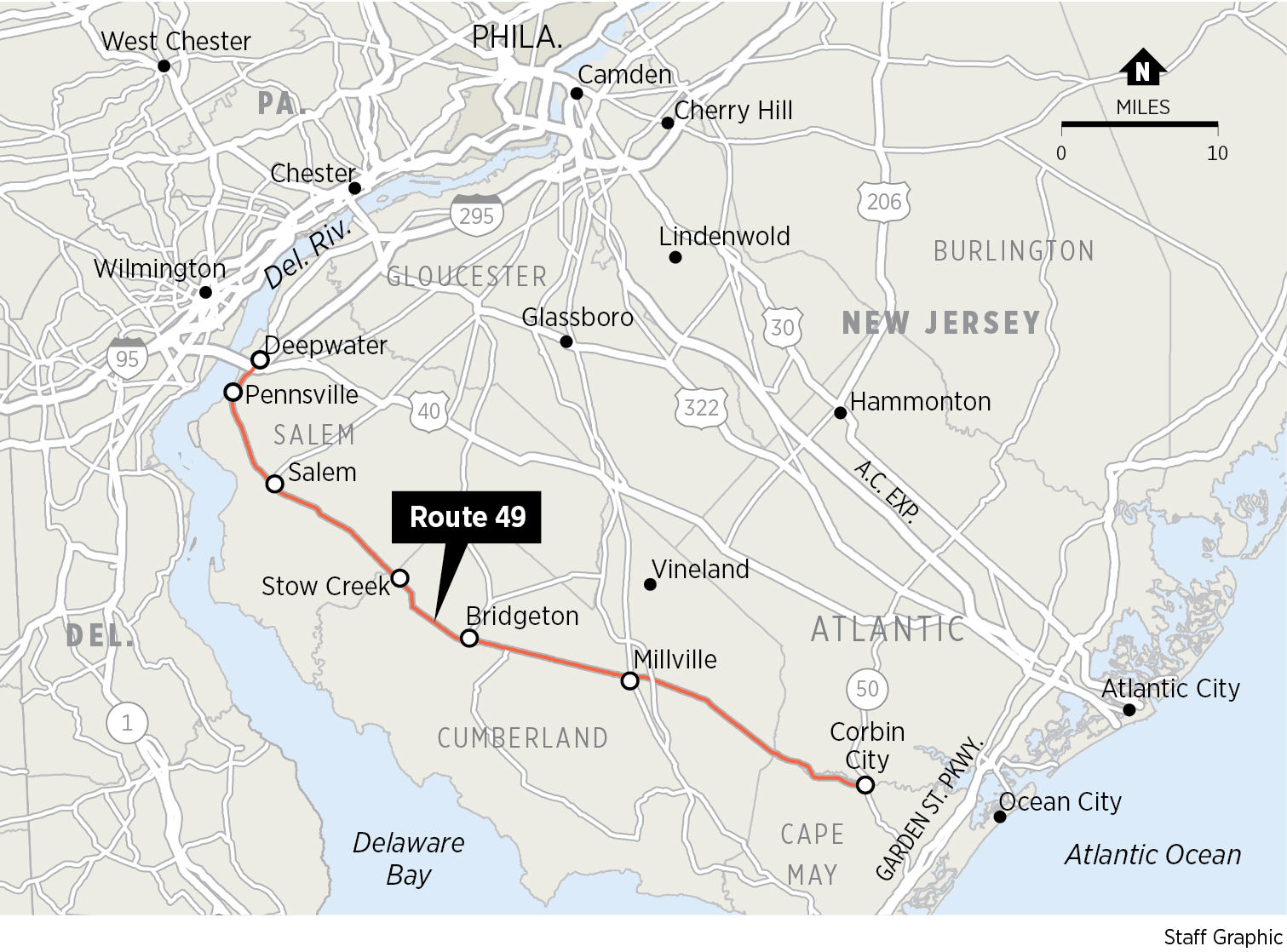 Before the opening of the Walt Whitman (1957) and Commodore Barry (1974) Bridges, the Delaware Memorial to Route 49 was a popular way for Delaware County and Wilmington residents to reach the Jersey Shore, said Doreen Talley, director of marketing for the Chamber of Commerce of Greater Cape May.

"There were fields and farm stands and ice cream stands," said Talley, 61, who lives in North Cape May. "We'd always stop and get a bushel basket of peaches."

The highway starts in Deepwater and ends 54 miles southeast in Upper Township, traversing mostly rural, occasionally suburban and a handful of urban areas in Salem, Cumberland, Atlantic and Cape May Counties along the way.

"We always took 49 to get to Wildwood," said Dorothy Bunting, who is active in local historical societies and has lived all of her 82 years on Route 49 in Pennsville. "If we were going to Atlantic City, we took 40."

Route 49 may not be as well known as Route 40, the White or Black Horse Pikes, Delsea Drive, or Route 73. It's no Atlantic City Expressway, either, and unlike Route 9, it hasn't been immortalized in a Bruce Springsteen song.

But 49's abundance of scenery,  scarcity of traffic and high number of high-visibility straightaways have made it increasingly popular among cyclists and motorcyclists.

The route "is a beautiful secret we can't wait to tell people about," said Devon Perry, director of Visit South Jersey, the tourism promotional agency. "It's more than just a road."

For some, it's a way to make a living. "There are not so many [chains], but more mom-and-pop places," said Jim Grant, who with his wife, Yvonne, owns the Inn at Salem Country Club in Elsinboro.

"Yvonne and I like an ice cream after a bike ride," he said. "We're not brave enough for the bellybuster."

As we headed south and east, Hiltebrand and Andrusiw, a longtime health-care administrator, noted the red-and-white "Save the Cabins" signs posted along 49.

The signs referred not to tourist cabins like those still found at Shady Haven, a longtime business on 49 in Pennsville, but to the endangered structures along Alloways Creek and other local waterways long used by anglers and hunters.

A rumor that Eleanor Roosevelt once stayed in one of those Shady Haven cabins appears to be just that.

But the legend of the bellybuster — a burger roughly the size of a big Frisbee or a small hubcap — seems to be based in fact.

"We roll the meat out by hand. Ten ounces. We weigh it and we roll it out," said Cheryl Hudock Cline, whose parents bought Hudock's in 1967 and have owned it ever since.

The original metal frames for shaping the patty, and the addition of a secret sauce, complete the dish, she said.

Hudock's is where one of the two buildings serves hot food, the other ice cream. They were built by the same local family behind Pennsville Custard.

Thus the yellow roofs, the quirky menu and the thoroughly South Jersey ambience.

Under the oaks, with a soybean field on one side of 49 and a field of feed corn growing on the other, we sat on picnic tables under towering oaks and shared a bellybuster.

All I can say is it's no wonder Hudock's has such loyal fans; the owners exchange Christmas cards (remember those?) with folks from Maryland, Virginia and beyond.

Alas, after the burger, our Route 49 excursion was over. At least for now.

"There's a lot more to show you," Hiltebrand said. "We should take another tour."

>>SEE MORE: From 2014, a photographer takes back roads to the Shore.

Kevin Riordan
Since 2010, I've served as a columnist, editorial board member, and writer for the Upside, writing good news and uplifting stories.