Fine councilmembers for dirty districts? Philly should steal this idea and others to stop litter | Ronnie Polaneczky

Despite decades of attempts by elected officials to change Philly's trash habits, our city is still an eyesore.  Clearly, we need new, creative, outside-the-trash-can ideas or we'll never lose our humiliating "Filthadelphia" moniker.

I went digging for ideas and found some startling ones among frustrated Philadelphians who love this town and want to see it reflect better on us all. Some ideas are nutty but intriguing. Others are so commonsense, if they were enacted today they might put a dent in the trash complaints called in to 311 — 50,204 in 2017 alone. I've rated the suggestions thusly:

Filthadelphia mapped: See how (and why) trash in your neighborhood stacks up

by Michael Boren and Julia Terruso

Trash on your Philly block: How you - and the city - can get rid of it

by Michael Boren and Julia Terruso

Jamie Moffett wants landlords like him to pay more for their rental licenses. Here's his math: If the city tacked an extra $40 onto each of those 77,335 licenses, it could generate $3,093,000 to fund street cleaning throughout the city.

"That's $3.33 a month per license," says Moffett, the founder of Kensington Renewal, a nonprofit that rehabs blighted properties into owner-occupied homes.

Moffett helped pilot a program last year that paid two formerly incarcerated men $13 an hour to clean 80 Kensington blocks biweekly for six weeks. The area never looked better, and the men had a chance to work — which studies show can reduce recidivism among returning ex-prisoners.

"This hits multiple targets with the same arrow," he says.

The idea intrigues City Councilman Mark Squilla, who's looking further into it.

"There are many priorities in the city; street cleaning should be one of them."

The American Non-Smokers' Rights Foundation estimates that 1.69 billion pounds of cigarette butts wind up as trash each year. By my count, all but, like, two pounds are on the ground in Philly.

Reader Bill Hangley suggests we follow the lead of CrowdedCities, a Dutch start-up that's training crows – the smartest birds out there – to retrieve butts in exchange for food pellets from a dispenser cheekily called a "CrowBar."

"If birds can pick up cigarette butts, they can be trained to pick up potato-chip bags," says Hangley.

The idea is still in development. But once it takes flight? Sign us up! 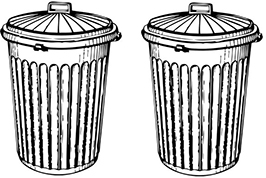 With great prerogative must come great responsibility. Let's hold Council members personally accountable for the cleanliness of their neighborhoods by imposing a tax on members, with the biggest hits levied against reps of the dirtiest districts. It might nudge them to be more proactive, and the tax could pay for more street cleaning.

"Fine City Council, not taxpayers" for trash, grumbles reader Beth Wargo. "I personally had to call [Council] repeatedly to have garbage removed."

Obviously, the tax will never happen, because no one would vote for it. But a city can dream, can't it?

Make the rich — including Comcast — pay

Many people I spoke with suggested that welfare recipients be tasked with tidying up our town, an idea that rankles Center City attorney Jim Pavlock

"Are corporations, businesses and homeowners who get property-tax abatements on their new renovations included" in that pool? he asked.

It's time for corporate-welfare kings and queens – like Comcast and Penn (and Amazon, if it locates here) – to get their rears in gear. Ditto for residents enjoying tax abatements on fancy homes in neighborhoods that stopped redeveloping years ago.

Pick up a broom, people. You're not that special.

"This may be too radical for City Hall," says Khan, "but using recycling bins with, um, lids would drastically reduce the litter on my block on windy days."

Fairmount resident Eileen Satullo wants lidded trash cans, too. The plastic bags we use a) stink,  b) attract rodents and dogs that rip into the garbage, and c) are "just dang ugly."

"And don't get me started on people who litter," she says. "We're the only beings who soil our own nests."

A civic-minded resident knowledgeable about the workings of City Hall (he asks to stay anonymous) says Philly's 37 SWEEP officers, who investigate and fine trash infractions, need to accompany these workers and sift through refuse to identify the rogue dumpers (via old bills and such) and fine them immediately. The program wouldn't require new officers; just different deployment.

Swift citation, he says, sends a powerful message. Hit a few of these dumpers with a staggering fine – how does $1,000 per incident sound? – and those scofflaws would stop making their business our expense.

"People with dogs are outside every day, regardless of weather, usually three times," says Queen Village resident Gerald Kolpan. "Neighborhood groups could provide dog owners with grabbers and ask them to pick up trash as they walk their best friends. It's easy, cheap and nobody has to bend." Genius!

Send litterers to Singapore for intervention

The "cleanest country in the world" comes by its reputation brutally, thanks to high fines, imprisonment, and even flogging for litterers who defile the environment. Remember when 18-year-old American expat Michel Fay was flogged for vandalism in Singapore in 1994, despite President Bill Clinton's plea for leniency for the teen? Singaporeans, man, do not play. One day in the pristine country's  zero-tolerance would scare straight the most profligate Wawa-bag tosser.

This tongue-in-cheek idea (mine) is obviously a goner, since our laws frown on corporal punishment. But doesn't it give you pause to see how seriously other countries take public comportment?

So stop embarrassing us, Philly. Clean up your act.

We Recommend
A Chester County boy and his family are seeking help against childhood Alzheimer's
Maria Panaritis
A visit to the epicenter of the U.S.-China struggle in the race for 5G | Trudy Rubin
Trudy Rubin
Philly ranks 3rd in STD transmissions partly because too many don’t use condoms | Jenice Armstrong
Jenice Armstrong
Our new archbishop is a Philly guy — and he’s speaking our language | Mike Newall
Mike Newall
Saudi Arabia murdered a journalist and hacked Jeff Bezos. Trump sent them U.S. troops | Will Bunch
Will Bunch
The ‘Clothespin’ is liberated. Now can Centre Square’s renovations make us love Brutalist design? | Inga Saffron
Inga Saffron
We Recommend
Inquirer Morning Newsletter