Cops should enjoy the Tower of Truth, a home of mice and men and women

It's a shock to the system to hear the news that the Inquirer Building at 400 N. Broad, often puckishly referred to as the Tower of Truth, is going to become the Tall House, replacing the Roundhouse as Police HQ.

The white (as in purity?), 18-story Beaux Arts building was completed in 1924 and was at that time the tallest building north of City Hall. It had special meaning to several generations of journalists who passed through there.

The 18th floor, once the publisher's penthouse office, would be a magnificent space for Police Commissioner Rich Ross. Should he be on the 18th, he would know that beneath his feet, on the floors below, stories about police successes and police corruption were written for almost nine decades before the then-owners sold the building in 2011 for about $23 million (less than they could have gotten, the new owner told me).

To be abandoned is the three-story, curvaceous Police Administration Building at Eighth and Race, built in the Brutalist style, shaped (some say) like handcuffs and hunkered down like a fortress.

Compared with the Roundhouse, the iconic Inquirer Building is elegant and graceful, with a commanding presence over Broad Street. In another municipality, it could be a city hall, or the main building of a prestigious university.

In its later years as a newspaper building, it had begun to sag and crumble. Maintenance was deferred — always a mistake — because the financial bottom had fallen out of the newspaper business. That had little to do, conspiracy fans, with the left-leaning editorial viewpoints of both the Inquirer and the Daily News, but a lot to do with the internet. 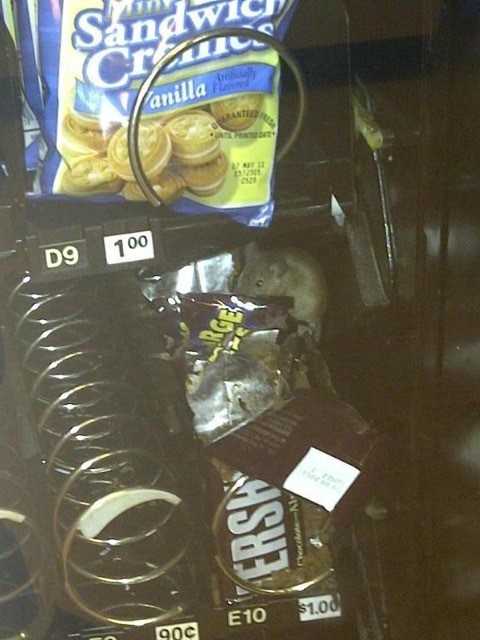 courtesy of dan gross
A mouse enjoying a snack in a vending machine at 400 N. Broad St.

The building had water and electrical problems, and an infestation of persistent rodents. One mouse was so persistent, it was photographed munching on a chocolate bar inside a vending machine.

There was also tension between the staffs of the Inky and the Daily News. Although the tabloid was moved into the building in 1965, the name of the paper was not added to the building's entrance until the early '70s, and then-editor Rolfe Neill had to fight for that.

The staffs of the two newspapers also fought — for scoops — from different floors of the building, with the Inky controlling more acreage than the News because its staff was about three times as large.

Some may find it hard to believe, but even though the broadsheet and the tabloid had a common owner and were "sister" papers, there was ferocious competition between "big sister" and the runt. Even with that competition, at the end of the day reporters from both papers would fraternize, drink — and more. There were numerous inter-newspaper romances and quite a few marriages, in which husband and wife knew not to engage in pillow talk about what stories their papers were pursuing.

Because of the stepped design of the building, the rooms on the lower floors were much larger than those on the upper floors. At one time, the publisher and his wife lived on the 12th and 13th floors.

As late as the mid-'70s the News was located on the seventh floor — both editorial and sales staffs on one floor. The Inky's editorial staff had the much larger fifth floor, editorial only, and staff of each paper pretty much avoided the other paper's floor.

In the '70s, the four elevators were run by human operators and only one car went all the way to the 18th floor, the office of the publisher, once Walter Annenberg. When the publisher rang for that one car, the operator would order other passengers off and speed to 18.

I'm not sure if Rich Ross will demand the same privilege, or even if he will commandeer the 18th floor.

I'm not sure if  PPD divisions experience the same competitiveness and jealousies of two newspaper staffs.

Within its walls, the Inquirer earned 20 Pulitzer Prizes, mostly under legendary editor Gene Roberts. The News earned three, and flourished for a while.

It's a beautiful building, it owns a piece of the hearts of those who worked there and who understood what it represented.

I hope the cops appreciate the legacy, and I wish them well.