The son of a South Philly grocer went on to marry Taylor — a union that lasted for nearly five years until she famously dumped Fisher for Richard Burton.

Despite the childhood tumult, Carrie Fisher eventually developed a warm relationship with her father and even befriended Taylor, her stepmother.

Although it was not smooth sailing for the father and daughter even into adulthood. Eddie Fisher's 1999 memoir, Been There, Done That, slammed Debbie Reynolds, and Carrie Fisher threatened to change her name, according to her father's Associated Press obituary. 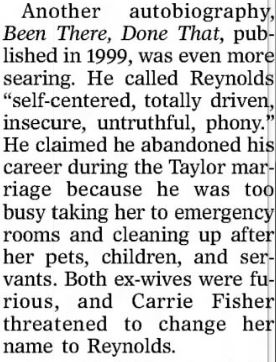 But as they aged, her opinion of him softened. In her 2008 one-woman show Wishful Drinking, Carrie Fisher called her father "adorable" and "unbelievably charming," but said his life in the fast lane also led to some problems.

The actress - who vaulted to cultural icon status in her early 20s after playing Princess Leia in Star Wars, returned to reprise the role in 2015's The Force Awakens, and even has a cameo in the recently relased Rogue One - said she and her brother Todd called their father "Puff Daddy" because he smoked five joints a day.

During a 2008 performance in San Jose, her father, by then in a wheelchair, joined her on stage and they sang together, she told the Associated Press.

Carrie Fisher had the rare distinction of making our front page before she was even born. She died today at 60 https://t.co/djSWXu2EUR pic.twitter.com/Tq8DU4wVbe

He died at age 82 in California shortly after the 2010 taping of his daughter's show for HBO, which she dedicated to him.

Her father was born in Philadelphia to Jewish parents. He attended Simon Gratz and South Philadelphia High Schools, but did not graduate. As a teenager, he crooned on the radio.

Through the 1950s, he scored 22 consecutive hit records.

Eddie Fisher was plagued by alcohol and drug abuse. In Been There, Done That, he described a 37-year addiction to methamphetamines.

His career and his life suffered from the scandal of leaving Reynolds for Taylor.
"But it wasn't simply divorce that destroyed him, it just was kind of every choice after that. It was drugs, it was Connie Stevens, it was the Playmate of the Year, it was, you know, Ms. Louisiana, marrying her. My dad, he's not the sort of bastion of good judgment, but he's really fun," Carrie Fisher said at a meeting with TV critics in 2010.

She addressed the conflicted relationship she had with her father in the 2011 book Shockaholic.

"True to form, my father continued to neglect his parental duties in death as he did in life. No last will and testament was found. There was a piano, an assortment of sheet music, a closet full of clothes, a watch and the one item ultimately worth coveting: my dad's diamond pinky ring that he had worn for as long as any of us could remember."

Carrie Fisher said the flashy diamond ring "was the one and only item that any of us wanted. And I thought it only fair(ish) that, since I was the main one to look after him in his declining years, this ring should go to me, and then, eventually, to my spectacular child."

She wrote that she later stopped by a jewelry shop to have the ring appraised. She learned that the nearly 10-carat gem was not a diamond.

"I loved my father. The man was beyond fun to hang out with, appreciative, playful and eccentrically sweet. But this was also a man who – though he genuinely meant to give bona fide diamonds of only the finest colour, cut, and clarity – ultimately was only able to offer cubic zirconium."

This article draws on material found in the digital archives of The Philadelphia Inquirer and Philadelphia Daily News. Search the archives for yourself and subscribe for full access.

We Recommend
The Springfield Inn in Sea Isle was being demolished. Its beloved cover band was trying not to die of COVID-19.
Amy S. Rosenberg
Race, title and anguish: Meghan and Harry explain royal rift
Jonathan Landrum Jr., Associated Press
2021 NBA All-Star game: Start time, players, how to watch and stream
Rob Tornoe
Willie Nelson sings Sinatra again, still gorgeously | Album review
Dan DeLuca
At Philly’s esteemed music schools, playing together as an orchestra is a much-missed opportunity
Peter Dobrin
What to expect at the 2021 Philadelphia Flower Show, held outside for the first time.
Grace Dickinson
Things to Do Newsletter