When do you know you've been to a worthwhile Romeo and Juliet? That moment some time in Act 4, when the jaws of fate begin to close around the endangered couple, and you start thinking, "Isn't there a way they could get out of this?" 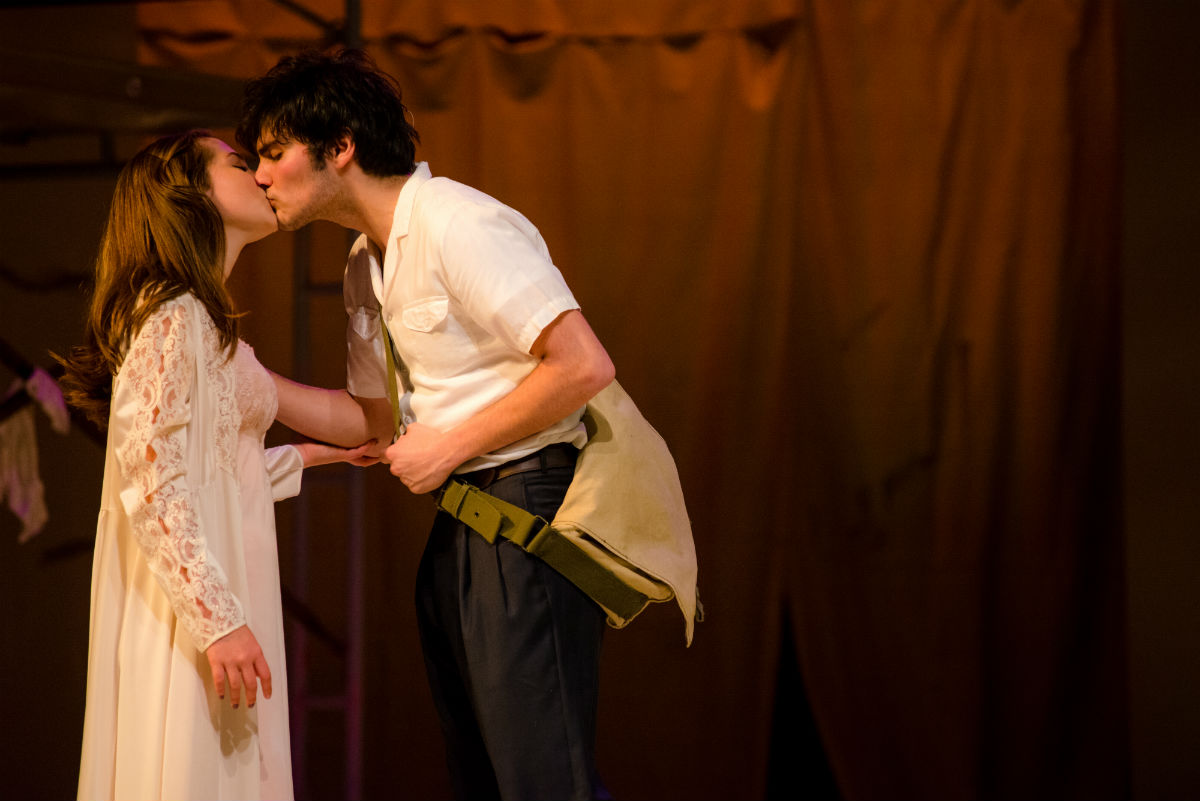 Maura McConnell
Lexi Gwynn as Juliet and Brandon O'Rourke as Romeo in the Media Theatre production of Romeo & Juliet.

During the Media Theatre's Romeo and Juliet, we were looking for that way out and felt the loss and pathos when there wasn't. That's encouraging for Media's first foray into Shakespeare: There was enough here to make you hope it does more.

Main credit goes to Brandon O'Rourke as Romeo and Lexi Gwynn as Juliet -- and director/adapter Bill Van Horn's choice to play them as young as the script says they are. These are children beginning to have adult desires, and, as a family vendetta wracks Verona, that's going to destroy them. Gwynn and O'Rourke play the lovers in distinct ways. Juliet's innocence shines forth in sunny expectations: She's so happy in her newfound, overwhelming love that she can't see the consequences. (Perhaps the night's biggest heartbreak: She wakes up in her ancestral crypt — smiling, looking forward.) Romeo, meanwhile, is so driven he doesn't care. His "Then I defy you, stars!" in Act 5 is one of the most pitiable braveries in Shakespeare.

This is, to be sure, neighborhood Shakespeare. Families came, school groups, friends, and a concentration of young women. The traditional slit double-sheet hangs as backdrop. Knife fights are awkward, and there are too many tears by bystanders, far too many, when Tybalt and Mercutio die. (Quiet restraint works better with the poetry of grief.) Characters cross themselves every 15 minutes. Clever use of scaffolds and platforms enlivened the budget set, especially during the balcony scene (at which many of the young women sat to attention — sweetly done, it won Romeo and Juliet much good will). Stage sound was less than reliable. Nichalas L. Parker as Mercutio was a crowd favorite, a true leader and personality: He somehow made the "Queen Mab" speech accessible, and the sex horseplay with Benvolio in Act 2 genially obscene. Alas, he was poorly mic'd throughout.

The adult enablers Friar (John Morrison) and Nurse (the ubiquitous Susan Wefel) are also innocents, swept up in the danger and romance — and, at last, catastrophe – to which they are accomplices. And Hillary Parker is an articulate and prominent Lady Capulet.

Van Horn's adaptation keeps plot foremost. I wanted more of the masque, with its tantalizing risk and wordplay. (I did, however, like the freeze-frame, where the revelers stay in place, and the two young hearts first see each other.) Also gone is the Prince's order for a monument to keep the final carnage in memory and bury tribalism forever. In its place are the Prince's words, "All are punishéd" — everyone in Verona, not just those involved in the deaths.

Leaving the theater, I heard someone remark that "the end of Romeo and Juliet is so much sadder than the end of Hamlet." That's true. The tone of Hamlet is elusive; even in excellent productions, it's hard to know how to feel at the gory finale. In Romeo and Juliet, sadness and regret can be piercing indeed, especially with leads as likable as Gwynn and O'Rourke. Much to note, much to build on. May the Media Theatre make more excursions into classic theater.