It filled the theater, kept them laughing all night, and got them standing and cheering at the end.

Laughter on the 23rd Floor by Neil Simon is the second of a Simon double for the Walnut Street Theater (where Last of the Red Hot Lovers is also playing before going on tour). Ideal for that house, Laughter is a full-cast, full-tilt show played at the top of the lungs. It's also a roman à clef, a lightly fictionalized memento of Simon's hitch with one of the most gifted writing staffs in TV history: that of Your Show of Shows (1950-54), Sid Caesar's wacko revue that survived just long enough to become immortal. 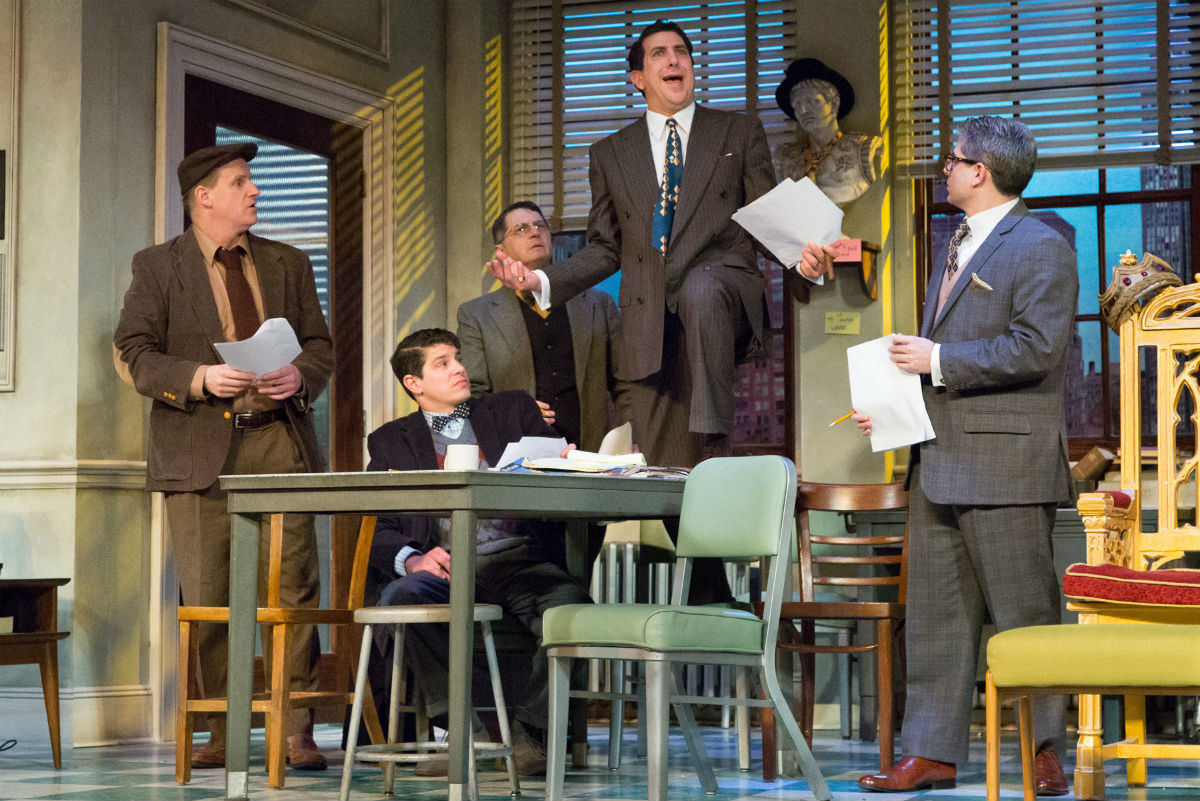 Director Frank Ferrante and his hectic, demented cast stay faithful to those who inspired each character. For  Simon, we have Lucas (played winningly by Davy Raphaely), the newbie, also our narrator, sparely used. Max Prince is the Caesar figure, played with distracted, lunatic abandon by Ferrante. Carol, a composite of Lucille Kallen and Selma Diamond, is done well by Leah Walton, especially as she gets more and more pregnant. Val, a reminiscence of the great Mel Tolkin, played with angst and questionable accent by Tony Freeman, has several of the night’s funniest lines. For Mel Brooks, we have Ira, hypochondriacal, petulant, insecure, with blurts of brilliance, performed by Scott Greer with dashes of Orson Welles and Vince Vaughan.

We hang on as one-liners cascade -- "I offered to take her on a second honeymoon. She said she didn't like the first one that much"; "You picked a bad time to come in late"; "Pope Pius approves of psychoanalysis! This means that from now on, confession will be $80 an hour" -- and egos clash and the front office meddles. Beneath it all lies a dark time of Stalin, McCarthy, the Rosenbergs, and the Blacklist.

The play itself pulls in several directions. As a study of a team of rivals, it's athletic and hilarious; as a look back, it's nostalgic, even sentimental; there's also fear and rage, starting with Max, suicidal, drugged out, terrified his show will fail, his writers starve, and the vicious front-office morons win. The anger is Simon's, too, at anti-Semitism, fascism, the triumph of the idiocracy. These cross-currents don't always flow together. I always wished that Carol had had a larger part, and that Simon had brought in Imogene Coca (Caesar's wondrous sidekick on the show) somehow, but no.

So these talented comics (characters and the actors alike) are riding an unstable steed. Yet at times, Laughter is among the funniest things Simon has done. (Told to move to California, Val says: "If you're a Jew, you end up in the desert, no matter what.") We see only one completed skit: a send-up of Julius Caesar starring "Marlo Brandon." The death of Caesar played by Brandon played by Sid Caesar played by Ferrante is exhausting and ineffable. And when Ira thinks up a conclusion, we channel a moment of crazy history.

Those writers! Making jokes, begging for love, fearing collapse … why did they keep it up? Maybe because, as one puts it, "we'll never have this much fun again in our entire lives." The Walnut's Laughter on the 23rd Floor reminds us of that fun.