Legendary rock photographer has an eye-popping show at Drexel

When Bob Gruen was growing up, his mother was an amateur photographer, and when he was just 4 or 5, she started showing him around the darkroom.

“That was good training,” the 71-year-old legendary lensman says. "I became the family photographer.”

And that job, says Gruen, turned out to be ideal preparation for the career he never planned to pursue as one of the leading chroniclers of rock and roll as it came of age from the 1960s to the 1980s.

For evidence of Gruen’s eminence, you could simply google "great rock-and-roll photographers," and see whose name comes up first.

Or you could head to the Leonard Pearlstein Gallery at Drexel University and see "ROCKERS," the exhibition featuring 124 large-scale photos, 65 contact sheets from the predigital age (including one with 36 shots of The Who from the Spectrum in Philadelphia), and a “Teenage Bedroom” installation with hundreds of Gruen shots and a sound track featuring a Jerry Blavat dance party.

The free show -- open 11 a.m. to 6 p.m. Tuesdays to Sundays -- includes Gruen’s most memorable images. There’s a quintuple-exposed Tina Turner, captured on stage in kinetic glory. John Lennon wears a  "New York City" T-shirt in one famous shot, and holds up a two-finger peace sign in another.  Led Zeppelin members pose in front of a private plane with their name on it that made a generation think playing music could be a pretty good gig. 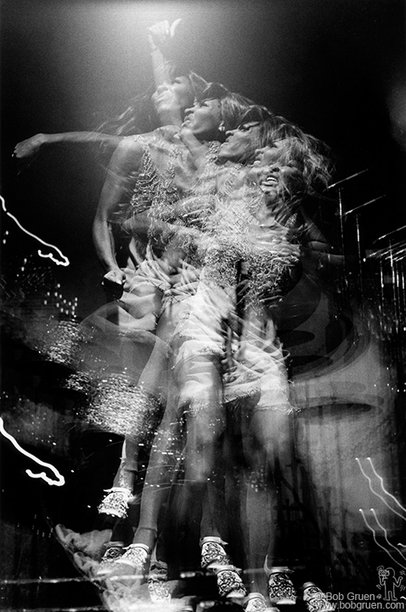 The pre-elementary school training turned out to be particularly useful  because "rock-and-roll bands are like families: groups of dysfunctional people trying to get along. It's about learning how to catch the moment when they all looked comfortable with one another."

The poster for the "ROCKERS" show features Debbie Harry of Blondie and Iggy Pop in a Gruen photo taken in 1977. In a clip from the 2011 documentary Rock and Roll Exposed: The Photography of Bob Gruen, Iggy talks about Gruen's knack for getting the great rock shots that happened offstage, like the clowning Sex Pistols sticking straws in one another's ears, or Bob Dylan swigging from a jug of wine. 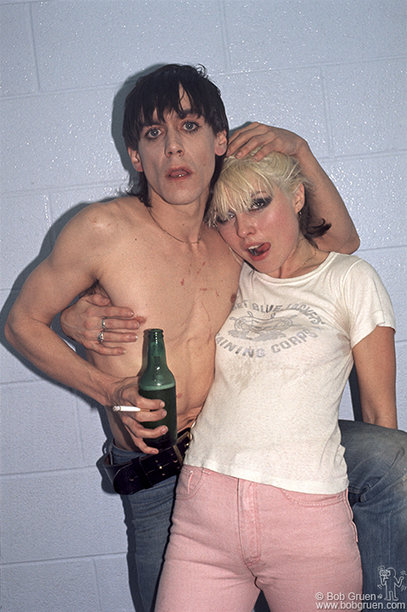 Iggy Pop and Debbie Harry in 1977.
Things To Do Newsletter

In the preface to Gruen's coffeetable book Rock Seen, Harry -- a close friend of the shooter's whom he remembers chauffeuring to Philadelphia to see the Ramones and Joan Jett in the late 1970s -- speaks to his special talent. "It was in the candid situations that he took most of his photos. Getting these type of shots isn't easy with all the variables of light and movement, but Bobby would show up in the most unlikely places, smiling away, holding his camera and ready to catch a piece of the action." (Gruen will sign the book and be interviewed May 3 by Rona Elliot at the gallery.)

Gruen -- whose name rhymes with "ruin" -- got a 35mm camera for his bar mitzvah and has rarely left home without a camera since. (Nowadays, he has a Canon point-and-shoot and an iPhone in his pocket and uses a Canon EOS 5D Mark III for jobs.)

In 1965, he couldn't afford a ticket to the Newport Folk Festival, but he talked his way into a photo pass and shot Dylan going electric.

After failed attempts at college -- "I wanted to tune in, turn on, and drop out, and I did" -- Gruen lived with a rock band called Glitterhouse, now forgotten except for contributions to the Barbarella sound track. But when the group signed a record deal, Gruen got hired to take their picture.

As Gruen, who now lives in the West Village in Manhattan with his wife, scooted to shows on his moped, his reputation grew as a well-liked member of the scene who became friends with Lennon and Yoko Ono, the New York Dolls, and the Clash, among many others.

He chronicled a decadent time and didn't keep his distance. "I didn't stay sane and healthy. I don't visit as a journalist to observe. This is my lifestyle. ... It was a very hedonistic free period where it seemed like everything was OK. ... It seemed like there were no consequences. And then you found out there were consequences."

What you won't find are Gruen photos that exploit his subjects. "I wasn't there on a 20-minute journalist's appointment. The trust is earned by not embarrassing people, by realizing there are things I wouldn't want people to do to me, so I won't do it to them. I was in it for the long haul."

Gruen's photos are emotive. "I like to capture the passion and the feeling of what's going on, rather than just the facts. The right moment, that has the feeling. One of my heroes is Cartier-Bresson, who is all about capturing the moment. ... To me, rock and roll is all about freedom, and the freedom to express your feelings very loudly." 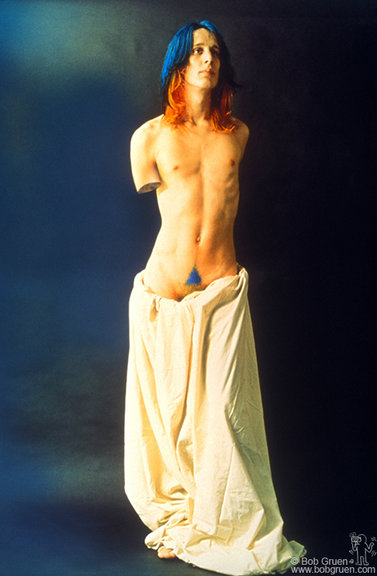 Gruen doesn't pick favorites, but he has plenty of stories, from the airbrush tricks employed to make Todd Rundgren look like an armless Venus de Milo for a Cream shoot in 1972 to the time he came to Philadelphia to see Patti LaBelle -- whose first three album covers he shot -- and wound up at a party for LaBelle's birthday where Laura Nyro sang "Happy Birthday." 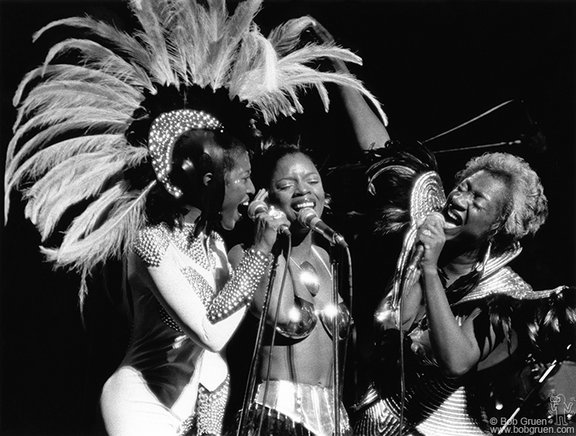 Nona Henryx, Sarah Dash and Patti LaBelle of LaBelle in 1974.

He waxes heroic about The Clash. "The Sex Pistols made people scream with rage, The Clash gave them the reasons," he says. "The Pistols looked back with anger, The Clash looked to the future with hope. They never let me down."

Gruen still goes out five nights a week ("I never liked watching TV," he says) and is an avid fan of Green Day and lesser-knowns such as The Strypes and Barb Wire Dolls.

"Photography's changed a lot since everybody can take a picture, and most people do. It used to be you have to operate the machine of the camera. Now, you just have to touch your finger to the phone to make an amazing picture."

He recalls working for Rolling Stone in the '70s when it would take six weeks for his pictures to appear.  "Now, before the first song has finished, half the audience has uploaded photos to Instagram and Facebook, and they're shared and seen all around the world. I don't intend to compete with that."

He laughs. "When I was 20, it was, 'Don't trust anyone over 30,' and people in their 60s and 70s were way, way old. And the ones that tried to be young were not cool at all. So I try to act my age. I'm not shooting and looking for new bands like I used to. But, hopefully, I can share the history with people."

We Recommend
The best things to do this weekend: Drive-in at Navy Yard, Women's history month, First Sunday, Holi, and more.
Jillian Wilson, for The Inquirer
Review: D’Angelo & Friends do Verzuz, a soulful salve in a pandemic winter
Dan DeLuca
Julien Baker’s new album has a grand, full-band sound and bracing honesty | Review
Dan DeLuca
Lee Daniels talks about ‘U.S. vs. Billie Holiday’ and the Black women of Philly who inspire all his work
Gary Thompson, For The Inquirer
Bruce Springsteen to pay a $500 fine after drunken and reckless driving charges are dropped
David Porter, Associated Press
When are Philly concerts coming back? There’s good news and bad news.
Dan DeLuca
Things To Do Newsletter