Consolidating his young but flowering career, Yannick Nézet-Séguin will assume the podium of the Metropolitan Opera in New York while remaining music director of the Philadelphia Orchestra.

Nézet-Séguin, 41, will phase in his Met duties gradually, becoming music director-designate in the 2017-18 season with two productions, and music director in 2020-21 leading five, the opera company announced Thursday.

In a simultaneous development, the conductor and the Philadelphia Orchestra have extended his contract with a deal keeping him in the post through 2025-26 - at least. It was just 18 months ago that his initial five-year Philadelphia contract was extended through the 2021-22 season.

Read about what this means for his career.

With the Met appointment, Nézet-Séguin, an upstart just a few years ago, will be heading two of classical music's most presigious institutions, putting both the opera and orchestra worlds at his feet.

"The conductors I have admired all my life divided their time between those two repertoires, and for me it's a question of keeping those two poles but actually making them geographically closer," Nézet-Séguin said this week in a call from Tokyo while on the Philadelphia Orchestra's Asian tour.

"So we happen to have a short train ride away between the two cities [with] arguably the two greatest organizations, symphonic and operatic, in our country. Of course, I feel very lucky I can do this."

Thursday's joint announcements came as both groups grapple with major institutional challenges - the Met with depressed ticket sales, and the orchestra with steering a course toward new audiences (and funders) it hopes to reach through expanded education and social-mission programs.

It also signals a crossroads for the cheery, amiable Montréaler, who became music director in Philadelphia in 2012 and who has spent much of the last decade in a peripatetic whirlwind - simultaneously guest-conducting top ensembles worldwide while retaining titles at orchestras in several cities.

Read what we said when he first became music director.

How can Yannick hold both jobs at once?

Now, being music director of two big companies will require a restructuring of his career, Nézet-Séguin said. It represents a settling down of sorts.

"As for the rest of my activities, I can imagine this will be reduced," he said. His tenure as music director of the Rotterdam Philharmonic Orchestra ends in 2018. "I will keep a minimal presence in Montréal until 2020-21, this is when my actual contract is up with Orchestre Métropolitain, and my guest-conducting in Europe will be sensibly reduced. Just select dates in Berlin, Vienna, and Munich, and that's pretty much it.

"So I made the choice to be a very much Northeast American."

With the new arrangement, Nézet-Séguin also aims to change the dynamic of the actual music-making to perhaps something deeper than has been the case for a maestro jetting from one ensemble to the next.

Had he grown tired of the pace?

"Yes. Tired is a big word, and I would not say it, because I am fortunate, very lucky to have been able to do this and travel the world and do a lot of projects," he said. "At 41, I still feel very energetic. On the other hand . . . I do realize that we make better music when we know each other, and you can evolve personally, artistically more in depth, when you are with the same ensemble. This is why I feel this position comes for me at the right moment in my life."

What makes him a good fit for the job?

Nézet-Séguin follows James Levine, who retired in May after more than four decades at the Met. The possibility of the job is something the younger conductor said he felt from the beginning - his first appearance was a Carmen in 2009-10 - but he did not enter the discussion stage with Met general manager Peter Gelb until the last few weeks.

"Since my very first production at the Met, there was something mutual between all of us, the organization, and Peter Gelb, that I could sense that was for me a lifelong dream, and I could sense from Peter when we had discussions that perhaps in the future this could be my place."

A Met spokesman said Nézet-Séguin's initial contract was a five-year deal starting in 2020-21. But Gelb has his eye on a farther horizon: "As with any great relationship, which we hope to have, we want it to be an enduring one. My hope is that it will last as long as Levine's." 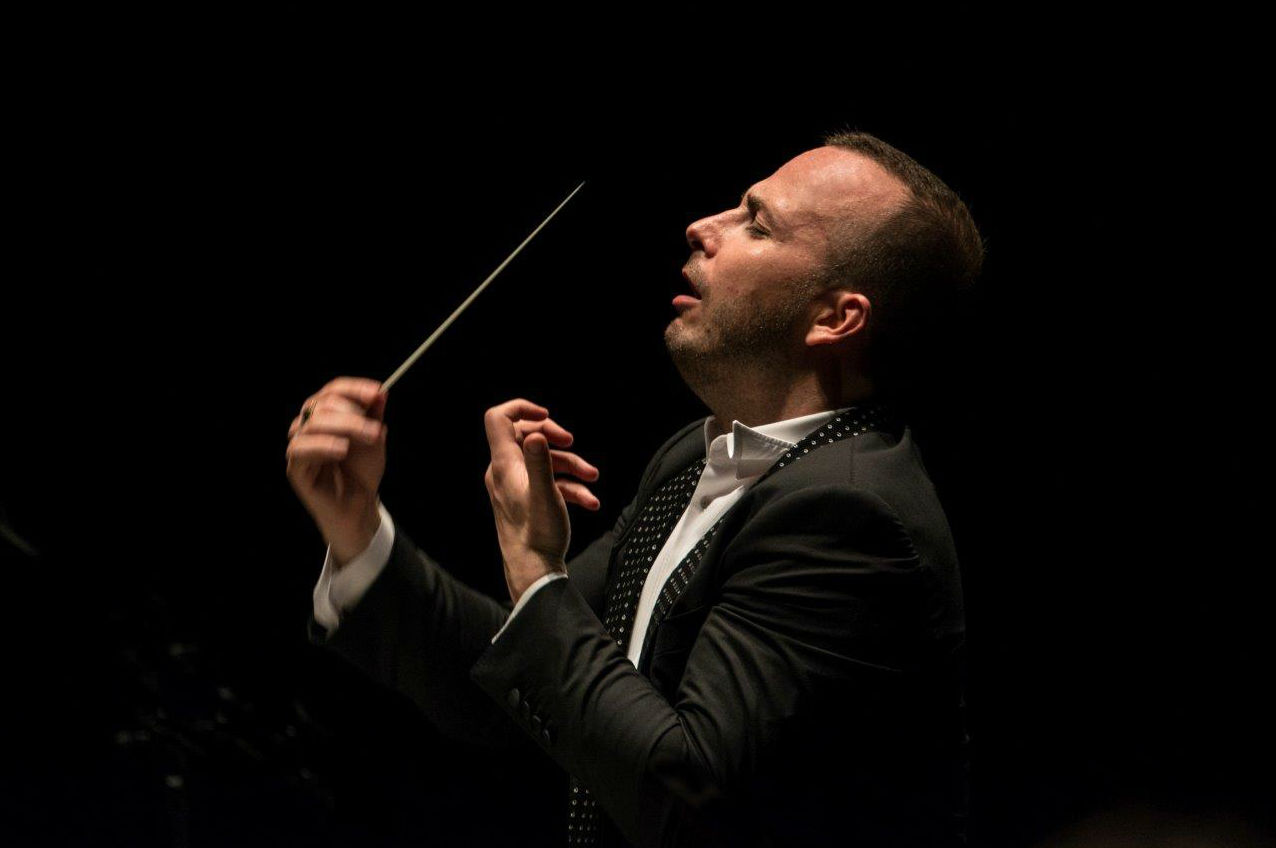 Nézet-Séguin leads the Philadelphia Orchestra in concert at the National Centre for the Performing Arts in Beijing on May 26. Photo: Jan Regan.

Nézet-Séguin was chosen, Gelb said, not through a formal process with a search committee, but by him in consultation with the Met orchestra, board, and artistic staff.

He praised the conductor's abilities in varied repertoire, his technical skill in working in a house as big as the Met, his way of connecting with audiences, and the way he inspires other artists.

"He was clearly the choice of the company," Gelb said. "It seems like he's the right fit. He's 41 years old, he has his whole life and the better part of his career in front of him - he seems right in every way for this position. He was the first possibility, and he was interested, so we didn't have to think about going to a second or third choice."

Gelb also cited what he called the most important quality: "He is extraordinarily musically charismatic."

Orchestra president Allison B. Vulgamore said discussions were already underway for another contract extension when the Met offer came. The orchestra had been looking ahead to a 125th anniversary in 2025 and other special dates for which Nézet-Séguin would be needed, and so talks quickened.

She declined to say exactly what number of weeks of conducting his new contract calls for, and Nézet-Séguin said he could not remember what that number would be starting in 2020-21, when he will lead five productions at the Met.

"Yannick's contractual weeks with us will not fall below 15 through the next 10 years," said orchestra executive vice president Matthew Loden, "with the caveat that how they are broken up between the main subscription season, touring, and our other venues will vary from year to year.

"Also, please bear in mind that many things he will be doing - special concerts, meetings with community partners, and so on - do not fall within the definition of a contract 'week,' so 15 'weeks' truly is a minimum of the time we will have with him."

The conductor points out that he has often exceeded the number of weeks stipulated by his contract. "I want to make sure my presence is across the board as strong [as it has been] to meet the needs of the organization while I am at the Met."

Financial compensation information was not disclosed for either job. The Philadelphia Orchestra Association previously said that in addition to paying $519,319 in 2013 to Nézet-Séguin, it paid the IRS $227,950 on his behalf for taxes, plus $12,564 for primarily travel-related expenses.

The Met said that Nézet-Séguin, although he does not assume any title for another year and half, would immediately become involved in artistic planning for the company, as the business of developing productions and engaging singers begins many years in advance.

Already, discussions are underway about the possibility of both groups' working together. What form that would take, Nézet-Séguin said, is very much still in the dream stage.

It could range from a joint concert to a new work for two orchestras (the Metropolitan Opera's orchestra sometimes performs on its own). "I am making this up as we are talking, but my idea is that, for example, when the Philadelphia Orchestra has a concert in Carnegie Hall that we could coordinate repertoire, or that when the Met has a world premiere it could be linked with works of the same composer in Philadelphia. There is a wide range of things I am thinking at the moment."

This kind of cross-fertilization might also open up new funding possibilities.

Vulgamore said Nézet-Séguin's appointment at the Met "shouts out loud the importance of him as an artist. I think it will help us with donors outside of our two cities," she said, calling him "someone who connects with audiences in a rich way." Often, she said, "that brings people to the forefront in fund-raising."

Will he stay committed to Philadelphia?

Nézet-Séguin said he was very much committed to local matters - the evolving mission in Philadelphia for the orchestra to expand education and outreach so the group becomes, as he puts it, "the orchestra of every Philadelphian."

Logistically, this promises to be easier with his orbit being more geographically compact. He intends to keep his Philadelphia apartment, and perhaps to get one in New York at some point. He can do a daytime rehearsal in New York and be in Philadelphia for a performance that night, or vice versa. He said he was still very much up for pop-up concerts, play-ins, side-by-side rehearsals with student groups, and all of the orchestra's other evolving social-mission programs.

"I don't intend to reduce that aspect of my work - rather, on the contrary, geographically with New York being so close and the way I rehearse a new production of an opera, and there are five or six weeks of rehearsal, that doesn't mean I am required every single day.

"So there are moments when I can commute and have two days to do meaningful things with the community outside the subscription series and come back to Philadelphia to do a pop-up or play-in or work with All-City Orchestra."

Still on the schedule for him will be tours, as well as the orchestra's residencies in Vail, Colo., and Saratoga Springs, N.Y. Moreover, he is exploring the possibility of establishing a summer institute at the Mann Center, where he has yet to make his debut.

"I am very impressed with the facility, and there is a lot of talk about what can be our future there," he said. "I think there are some very exciting projects there that will make our presence, or my presence, very significant that I would very much like to see materialize."

New York may beckon, but no one should take this latest contract extension in Philadelphia as the last word.

"I imagine I will be there for a very long time. Ideally, I can tell you that I imagine 2026 will not be the last year in Philadelphia," Nézet-Séguin said. "This is a 10-year renewal, and it would be too strange to do a renewal [now] that would go beyond the 10 years. But at the moment, I envision the two organizations in my life can really be the two poles."