FORGET SOCCER MOMS and NASCAR dads. In November, the presidency could go to the candidate who attracts the most craft-beer drinkers.

FORGET SOCCER MOMS and NASCAR dads. In November, the presidency could go to the candidate who attracts the most craft-beer drinkers.

Don't laugh, because it appears President Obama's re-election campaign has already taken note of an astounding phenomenon in 2008 election results - with the hope of a suds-soaked repeat in 2012.

It's a stunning and previously unnoticed voting trend that almost certainly explains the presence last week of a craft brewer among the Democratic National Convention speakers, as well as the recent release of the Obama White House home-brew recipes.

Take a look at the adjoining chart. (Click to enlarge.) It ranks the states by brewery density - the number of breweries per 1,000 square miles.

Remarkably, every one of the 25 most densely brewed states voted for Obama in 2008. Those blue states account for 335 electoral votes - much more than the 270 needed for 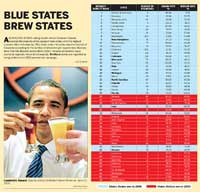 Statisticians call this a positive correlation. Here's how I interpret it:

The density of breweries in a state is at least partly related to the density of its population; the more people, the more breweries. Obama performs better in densely populated states because urban populations tend to be more diverse and liberal.

Population density alone, however, does not explain the phenomenon.

lots of undeveloped space - all went to Obama in 2008. Tellingly, each of those states is well-known for its abundance of craft breweries. Vermont, for example, boasts the most breweries per capita in the nation.

Now, cynics might say: Of course Obama does well in densely brewed states; you've gotta be drunk to vote for a Democrat.

But they'd be wrong.

If you rank the states by per capita beer consumption, you don't see any particular trends. Of the 10 biggest beer-drinking states, five voted for Obama in 2008, and five backed Sen. John McCain of Arizona.

That's because per capita consumption is largely a reflection of widely distributed mainstream brands (BudMillerCoors, Corona, Heineken, etc.), which account for 90 percent of sales.

What's really important here is the type of beer voters are drinking.

Most American breweries today are microbreweries or so-called craft breweries - small businesses that make handcrafted batches of premium-priced beer. There are about 2,100 of them nationwide, according to the Brewers Association, the highest number since the 1800s.

The growth of these small breweries is the single biggest story in beer since the introduction of light beer in the 1970s; it is thoroughly transforming the image of beer. At its heart is a rejection of bland, factory-produced lager and the appreciation of full-flavored "artisanal" ale.

These bold flavors are not for everyone. Indeed, craft beer accounts for fewer than 1 in every 10 glasses consumed.

So, we're talking about a minority of voters here. But it's a minority that could sway the election.

Consider that craft-beer drinkers, according to demographic studies by the Nielsen Co. and others, are mainly white and male.

This is exactly the sector that's posing the biggest challenge for Obama in November. The latest polls show he trails GOP candidate Mitt Romney by a whopping 60 percent to 34 percent among white males. That's enough of a gap to overcome his lead among women and minorities in some swing states.

As it happens, though, eight of the nation's 10 swing states rank above the median number of breweries per square mile. Which is to say, the battleground is well lubricated.

It appears the Obama campaign is trying to trim the president's voter gap among white males by targeting craft-beer drinkers.

Over Labor Day weekend, the White House released the recipes for Obama's home-brewed beers to huge applause from craft-beer drinkers. The recipes were shared through social media and critiqued by both amateur and professional brewers.

Then, during the convention, Bill Butcher, the founder of Port City Brewing Co. in Virginia (an important swing state), gave a rousing speech about Obama's support for small businesses. He was joined by John Hickenlooper, the governor of Colorado (another swing state) and a native of Narberth who moved west to open Wynkoop Brewing Co.

In the weeks ahead, don't be surprised if you see photos of Obama downing a pint of fresh beer from a brewpub in, say, North Carolina - another swing state that happens to have a lot of breweries.

I know I'll get some argument here, but I'd say that it takes a certain progressive, open-minded attitude - certainly not fundamentalist, conservative values - to even begin drinking craft beer. That's why the Deep South is so far behind the curve in the microbrewing revolution.

No, not all craft-beer drinkers are progressives. But in a race where the challenger is a nondrinking Mormon, I think there are enough of them to swing the election to Obama.

Joe Sixpack
Joe Sixpack drinks beer and writes about it for a living in America's Best Beer-Drinking City. Yes, it is a dream come true and, no, he is not currently in need of an assistant. He's won a bunch of journalism awards and was named America's top beer columnist in 2002 and 2006. He is the author of the upcoming Joe Sixpack's Beer Reporter Notebook (Camino Books) and he hosts a Web site at www.JoeSixpack.net.