It's less than a week before the city's self-imposed deadline to shut down two of Philadelphia's heroin encampments, where people have been living since last fall — and the camps along Kensington's Lehigh Avenue are swelling with people.

The difference: Fewer are people in addiction, and more are city housing and medical workers who have been visiting the camps daily, in an effort never before deployed, to get people into drug treatment and permanent housing by the May 30 deadline.

By some measures it's working: Here, at the heart of Philadelphia's opioid crisis, more people have entered treatment in the last two weeks — 39 — than  in the prior six months.

Two 40-bed shelters on Kensington Avenue, reserved for the people in the Kensington and Lehigh camps, are full; a third in North Philadelphia is filling up. In the last two weeks, about 100 people have left the camps, said Liz Hersh, the director of the city's office of homeless services, said.

Yet at two more heroin camps that are not being cleared, the population of people in addiction is booming.

That tension was clear Tuesday morning at a site that is being closed down, under the train bridge on Kensington Avenue. A half-dozen city workers in bright orange shirts, bearing clipboards, stationed themselves on the freshly scrubbed sidewalk, trying to get camp denizens to talk to them.  Some shook hands and asked about treatment.  Others dragged their tents back onto the clean sidewalk and hunkered back down on battered mattresses.

Still others decamped to Emerald Street and Frankford Avenue, sites the city is leaving alone for now. 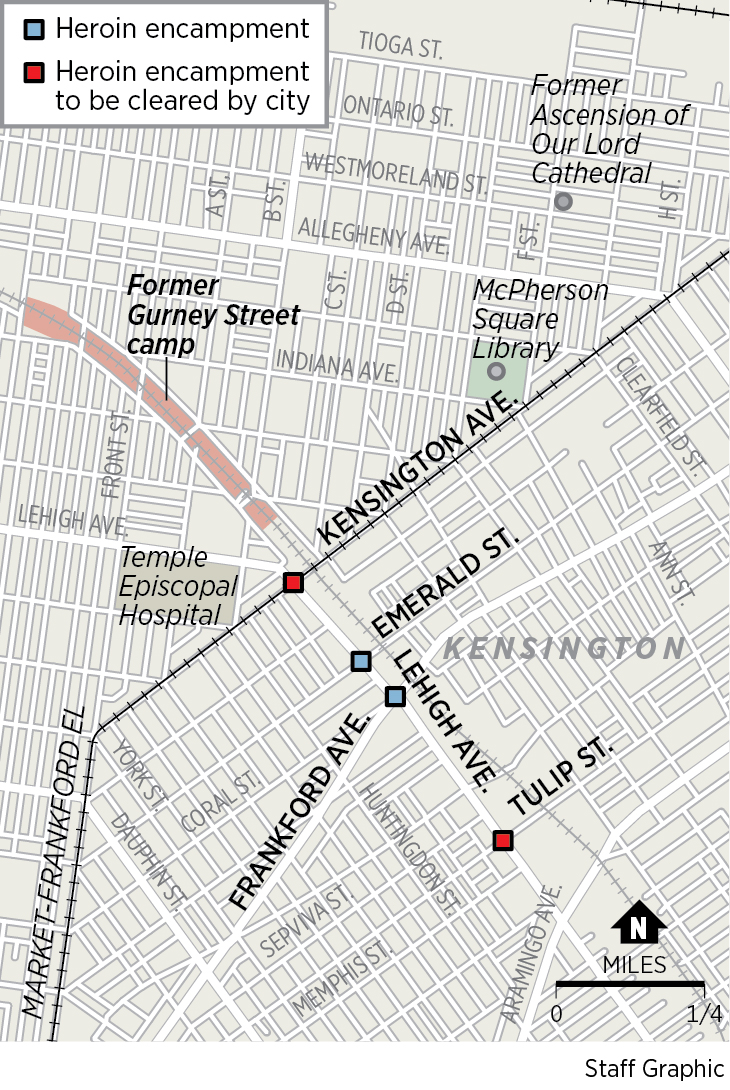 In this neighborhood, going after the camps can seem like an exercise in futility. Officials know they won’t reach everyone staying there, and each person they manage to get off the street may be replaced with another. Meanwhile, volunteers bringing hot meals and tents continue to arrive daily, bringing donations that people need, but that some officials fear may be helping them stay on the street.

Outreach workers are fighting hard for each victory: another person  on a path to treatment, or just sleeping indoors. Despite the struggles, the success seen so far has officials hopeful they can reach even more homeless people in addiction.

"Everybody wants it to work," said City Councilwoman Maria Quinones-Sanchez, whose district encompasses three of the four camps and two of the new shelters. "This is the closest we've gotten to breaking down barriers on access to housing and treatment. It shouldn't have taken this long, but we're there."

Under the train bridge on Kensington Avenue, outreach workers on Tuesday consulted their list of people living in the camps on Kensington and Tulip Street as of May 1. (New arrivals, and residents of the other camps, don't have a shot at the new shelter beds that have opened up.)

The twice-weekly sanitation crew had just been through. "Save our tents!" a man yelled to the outreach workers.

As the eviction plan has moved forward, tension has grown, between permanent residents of Kensington and charity groups who for months have arrived at the camps with food and, in some cases, tents. Some city officials and neighbors have rankled at the tents in particular: They make the camps feel more entrenched, even as the city is working to move people out. "It's one way to save them in winter, but it also gives them a false sense of being secure and safe, and I just don't think that's a good thing in the long run," said Karen Puchaw, a member of the team that runs the St. Francis Inn soup kitchen on Kensington Avenue.

The city can't stop people from handing out food in the camps, but "we want better than people living in the squalor," Hersh said.

Charitable volunteers say they're filling dire needs for people often unable or unwilling to seek services. "The enabling question is persistent," said Bob Quinn, a volunteer with the outreach group Angels in Motion, who was handing out food and coffee under the Frankford Avenue bridge on Wednesday. (Unlike some other charity groups, Angels in Motion hands out non-perishable snacks to avoid leaving extra food behind, which leads to litter and rodent problems. ) "The way we look at it is that we are enabling people to live another day."

People living in the camps said they know eviction is inevitable, though some still didn't know where they were going to go.

"I was going to stay until the end. I didn't really have a plan," said Ryan Forrest, 28. He's originally from Pennsauken, but has lived in Philadelphia for two years and under the Kensington Avenue bridge for seven months. "But they were pushing me to the shelter, and they told me I was on the list, and I went up there."

He spent the winter under the train bridges.

"Why wait until now to do this?" Forrest wondered. "Why did they let so many people get frostbite during the winter?"

Tim Sheahan, an outreach worker with the city's Department of Behavioral and Intellectual disAbility Services who has been in the camps since the eviction plan launched May 1, said he worries about the people he hasn't found. "I'm scared for what may happen," he said. But he was buoyed by the results he's seen from the newly expanded services: "We've gotten as close to treatment on demand as possible."

Meanwhile, he keeps running through the names on his list.

The guy who sells hypodermic needles near the Somerset El station? He was at his usual post Wednesday morning, but not quite ready to come into a shelter. The couple living under the bridge with their cat? Sheahan was pretty sure that one of the shelters would take them, cat and all.

Down the block, a young woman with long braids swayed, her knees almost buckling, in the shade of the bridge.

"Do you want help?" Sheahan asked.

She nodded, and mumbled her name.

She was on Sheahan's list. He told her to head up the street to the shelter. Away from the camp.