When medication prices are unaffordable, patients travel abroad for a better deal

Every three months, Jon Yeagley sets out from his Berwyn home at 5:30 a.m. for the six-hour journey to Canada.

He crosses the border at Buffalo, stops at a Walmart a couple of miles into Canada, and turns around 30 minutes later with a small paper bag on the seat next to him.

He's home by bedtime and can sleep easier, knowing his 20-year-old son has a medication that is helping restore the hair and the confidence the young man lost after being diagnosed with the skin condition alopecia areata as a teenager.

The drug, Xeljanz, would cost the family almost $50,000 a year at home, in part because it isn't covered by their insurance plan. In Canada, a year's supply costs $15,000.

As drug prices soar and patients with high-deductible health plans must lay out more cash, this kind of medication tourism is enticing.

Importing prescription medication is prohibited by the U.S. Food and Drug Administration, but the rules are not enforced for individuals buying small amounts of drugs for personal use. In a 2016 survey of 1,202 adults by the Kaiser Family Foundation, 8 percent of people said they or someone in their household had traveled to another country for medications or used an international online pharmacy to skirt exorbitant U.S. prices.

"The reason so many people feel compelled to engage in personal importation is because the prices of many of these drugs are unsustainable — and unaffordable for many patients," said Rachel Sachs, an associate professor of law at Washington University in St. Louis, who specializes in drug pricing. 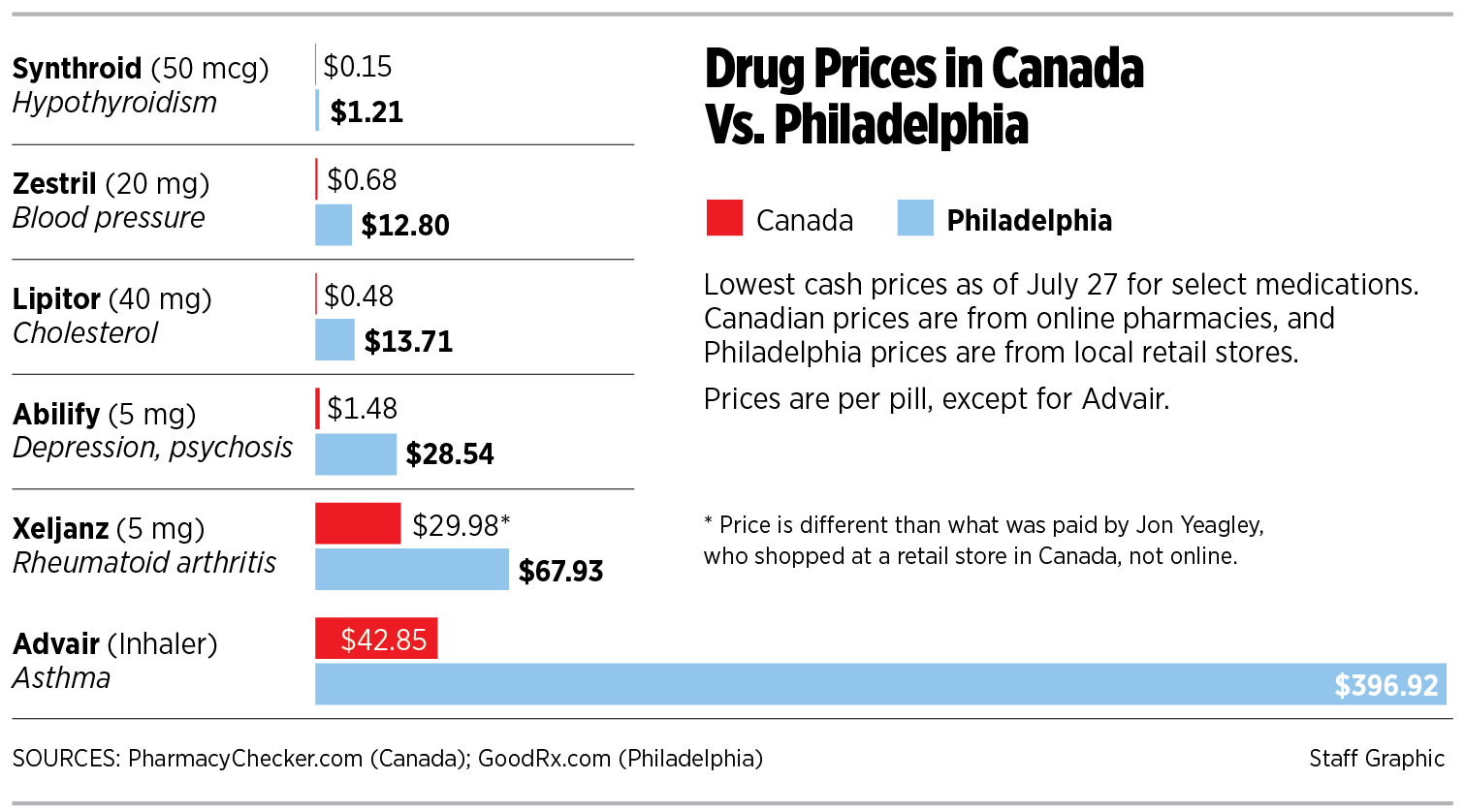 For a while, the Yeagleys bought Xeljanz in the United States. Though the drug is FDA-approved for rheumatoid arthritis, it was prescribed to Yeagley’s son, Jonathan, by a Yale University-affiliated doctor who has published medical research about its effectiveness in stimulating hair growth. But when the cost became too burdensome, (a year’s supply cost closer to $37,000 in 2016, when Jonathan started taking the medication) Yeagley arranged a video consultation with a Canadian doctor, who wrote a prescription that could be filled at a pharmacy minutes from the border.

He was nervous the first time he faced the security checkpoint, and he considered claiming he was sightseeing.

"The pharmacist said, 'Just tell them what you're doing.' I've done that every time since," Yeagley said.

The family uses a $15,000 rebate card from Xeljanz maker Pfizer to pay for three months of the medication in the U.S. To cover the rest of the year, Yeagley makes three trips to Canada, each time spending about $3,700 for a three-month supply.

The FDA has not enforced rules banning such purchases in part because it's too hard to keep track of it all, experts say, especially as the number of online pharmacies has grown.

The FDA estimates that just under 22,000 FDA-regulated products, primarily drugs, were intercepted at international mail facilities in the last nine months. That's up 62 percent from about 13,500 such packages blocked in the prior 12 months.

The FDA does not prosecute Americans who order medications from foreign pharmacies, but when packages are intercepted, it will return them to the sender or destroy them.

"There's no way for the FDA or any federal agency to truly know the scope of the problem," said Jeremy Kahn, a spokesperson for the FDA, in an email. The agency staffs international mail facilities (IMFs) to provide a "frontline defense against illegal, illicit, unapproved, counterfeit, and potentially dangerous drugs entering the U.S.," he said. "However, the sheer volume of drugs that are being shipped through the IMFs far exceeds our interdiction capabilities."

The FDA recommends sticking with American pharmacies because the agency can't vouch for the safety or efficacy of foreign medications it has not approved.

Even medications that have FDA approval shouldn't be bought from foreign countries, the agency says, because they may have been manufactured in a facility that's not inspected by the FDA. So consumers are putting their trust in the regulatory authority of another country.

But as prices in the U.S. continue to rise, widening the chasm between prices in Canada and Europe, patients are willing to overlook such cautions.

"As long as the drug price discrepancies between the U.S., Canada, and other countries remain as high as they are, people will do what they need to do to afford medicine that helps them stay healthy — or even to live," said Gabriel Levitt, president of PharmacyChecker.com, a website that vets international pharmacies for American consumers.

Even doctors are raising the possibility with patients.

"I ask all my patients, when I'm pretty sure that they're struggling to pay for their insulin, I ask them, 'Are you planning to take any trips?' " said Mark Schutta, the director of the Penn Rodebaugh Center for Diabetes at Penn Medicine. "For people who are paying these maximum prices for insulin, it makes sense."

That's how Catherine Price, a writer who lives in Philadelphia, wound up filling her insulin prescription in the Netherlands, while on a business trip to promote her latest book, How to Break Up With Your Phone, in June.

After talking to her doctor about rising insulin prices, Price, 39, said her doctor, a colleague of Schutta's, asked if she had any upcoming trips abroad.

Price, who has type 1 diabetes, paid $100 for three vials of insulin at a little pharmacy in Amsterdam, plus $450 for her round-trip plane ticket, which in her case was already paid for. At home, a local pharmacy quoted her $645 for a single vial  — with her insurance coverage – which would come to nearly $2,000 for three.

"If you're going to pay that much for your medicine, you might as well get a weekend in Europe out of it and come out ahead," she said.

How to safely buy medications online

People considering buying medications in another country must be cautious, especially if shopping online.

Canada, the United Kingdom, and European countries have their own systems for regulating pharmaceutical companies and ensuring patient safety, so purchases from brick-and-mortar stores there do have that layer of safety. But it's harder to verify the origin of medications purchased online.

Independent organizations, such as PharmacyChecker.com, vet international pharmacies, but the group is not sanctioned by the federal government or the National Association of Boards of Pharmacy, which represents state pharmacy regulators.

"We in America take things somewhat for granted, in that all the protections the FDA puts in place are followed. We can't say that's necessarily the case in other countries," said Patricia Epple, CEO of the Pennsylvania Pharmacists Association.

Levitt, of PharmacyChecker, admits there are risks to buying medications online, but thinks the government's and pharmacy association's warnings are a scare tactic.

Pharmacies vetted by PharmacyChecker are licensed with their applicable pharmacy board or licensing authority, do not sell controlled substances (which international pharmacies cannot ship into the U.S.), require a valid prescription, and encrypt personal financial information, he said.

Yeagley isn't worried about the safety of the drug he buys in Canada. Rather, he's relieved to have found a way to provide his son a medication that has improved his medical condition — without it costing the equivalent of a year's college tuition.

"This is such a big deal for him," Yeagley said. "We'll do whatever we can to make sure he gets the drug."

Share your own experience — and what you paid — at Philly Price Check or by emailing healthcosts@philly.com. Or leave a voicemail message at 215-854-2500 describing the billing issue you would like to share.