Can Philly afford to maintain its huge, aging mural collection?

For 30 years, Frank Washington, the late Germantown native and Harlem Globetrotter, had watched over the intersection of Wayne and Chelten avenues. People had grown attached.

But the wall bearing his portrait recently required extensive repairs, and the likeness was no more.

As a small crowd gathered for a meeting — part memorial service, part brainstorming session — at a Free Library branch in Germantown to talk about the fresh white wall where Frank had been, opinions were mixed. Many residents were enthusiastic about a new and better mural. But not everyone was ready to move on.

"People wonder where Frank went," said Allison Weiss, a community organizer. "That's why I'm here, to make sure he's included somehow. It's not right when they just eradicate you. I don't like when they wipe out history." 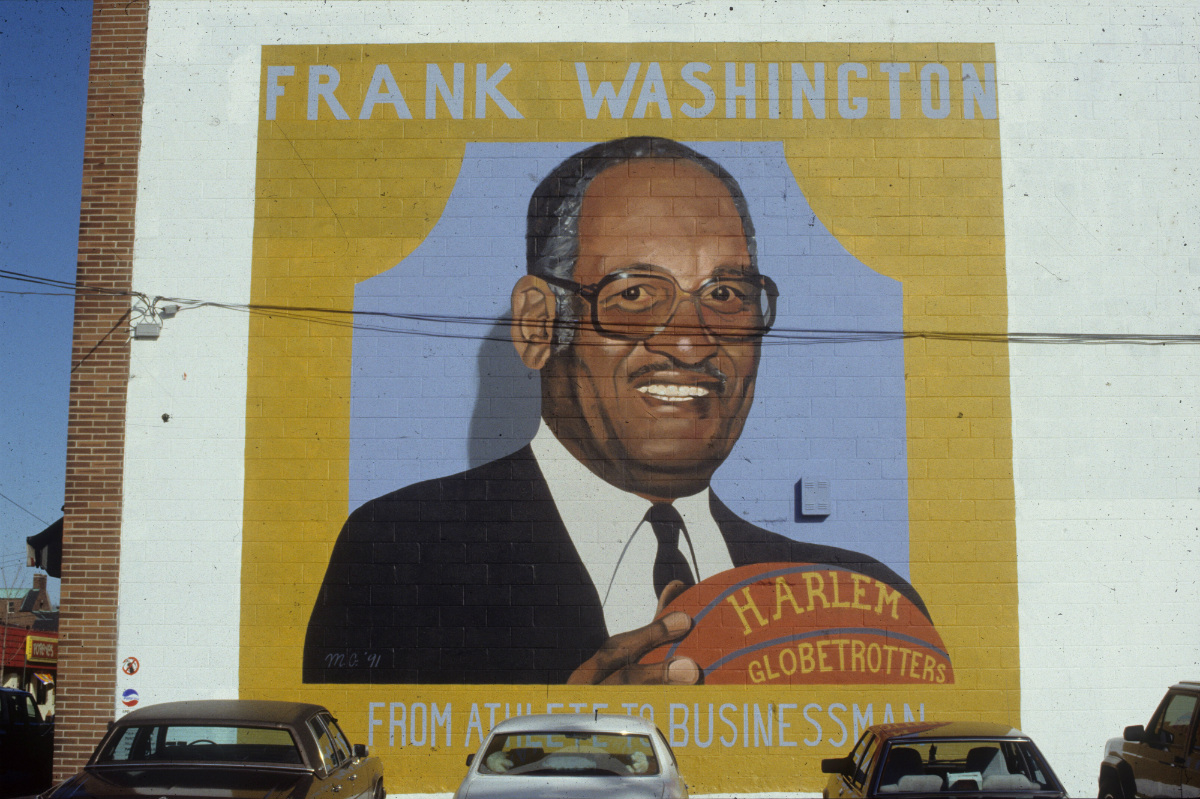 A view of the now-decommissioned Frank Washington mural at Wayne and Chelten avenues. (Photo courtesy of Mural Arts Philadelphia)

Such debates are arising with increasing frequency in a city with perhaps the world's largest mural collection: more than 3,800 of them, some decades old and painted on the imperfect canvas of Philadelphia's aging architecture. Consequently, the city's Mural Arts Philadelphia is, for the first time, taking a strategic approach to conservation of its collection. On Monday, City Council will hold a hearing on the issue, which in many cases comes down to funding.

"Our collection spans the city, and we have to think about how we're going to preserve it," Mural Arts executive director Jane Golden said. "It's incumbent upon us to ask: What does acting sustainably mean?"

She said a long-term goal is to create a cash reserve dedicated to maintenance. For now, the organization has built a database of 1,000 murals that may need attention, and is creating a committee and process to decide, in Golden's words, "what gets preserved and what goes to mural heaven."

Golden said the initiative was sparked by a visit to Los Angeles a few years ago.
There, she saw a cautionary tale: "It was the center of the universe as it relates to murals, but then there were funding cuts and an outbreak of graffiti." The line between mural and billboard blurred and, from 2003 to 2013, the city banned murals altogether. Many were left to fade; others were painted out.

"It was like a ghost town of murals," she said. "It opens the door to people not caring that much about the mural collection."

Not every mural can be saved. The oldest survivors date to the late 1980s, painted by Mural Arts' predecessor, the Anti-Graffiti Network, a program run by Golden with a team of ex-graffiti writers who together sometimes painted 500 murals in a single year.

"We were doing a ton of work without thinking about, 'How long is the work going to last?'" Golden said.

Since then, the organization's practices have evolved: The organization switched from house paint to mural paint, began sealing murals, and became more diligent in examining potential mural sites for structural issues.

And, it began a restoration program that consumes between $150,000 and $200,000 of the program's $1.5 million city budget. (The organization's total annual budget is $8 million, most of it grants and private donations, but it's much more difficult to raise funds for conservation than new projects.)

The average lifespan is about 15 years. "Sometimes it's longer. Sometimes, unfortunately, it's a lot shorter," she said. "Over time, some of the buildings the murals are on have become abandoned, or the owners couldn't afford to maintain their roof or flashing, and there were leaks."

Until last year, building owners signed a one-page agreement with Mural Arts. Now it has put in place a more thorough contract that lays out the maintenance responsibilities for both parties and the rights of each to decommission the mural with proper notice. But the organization is still often taken by surprise when a building is sold. 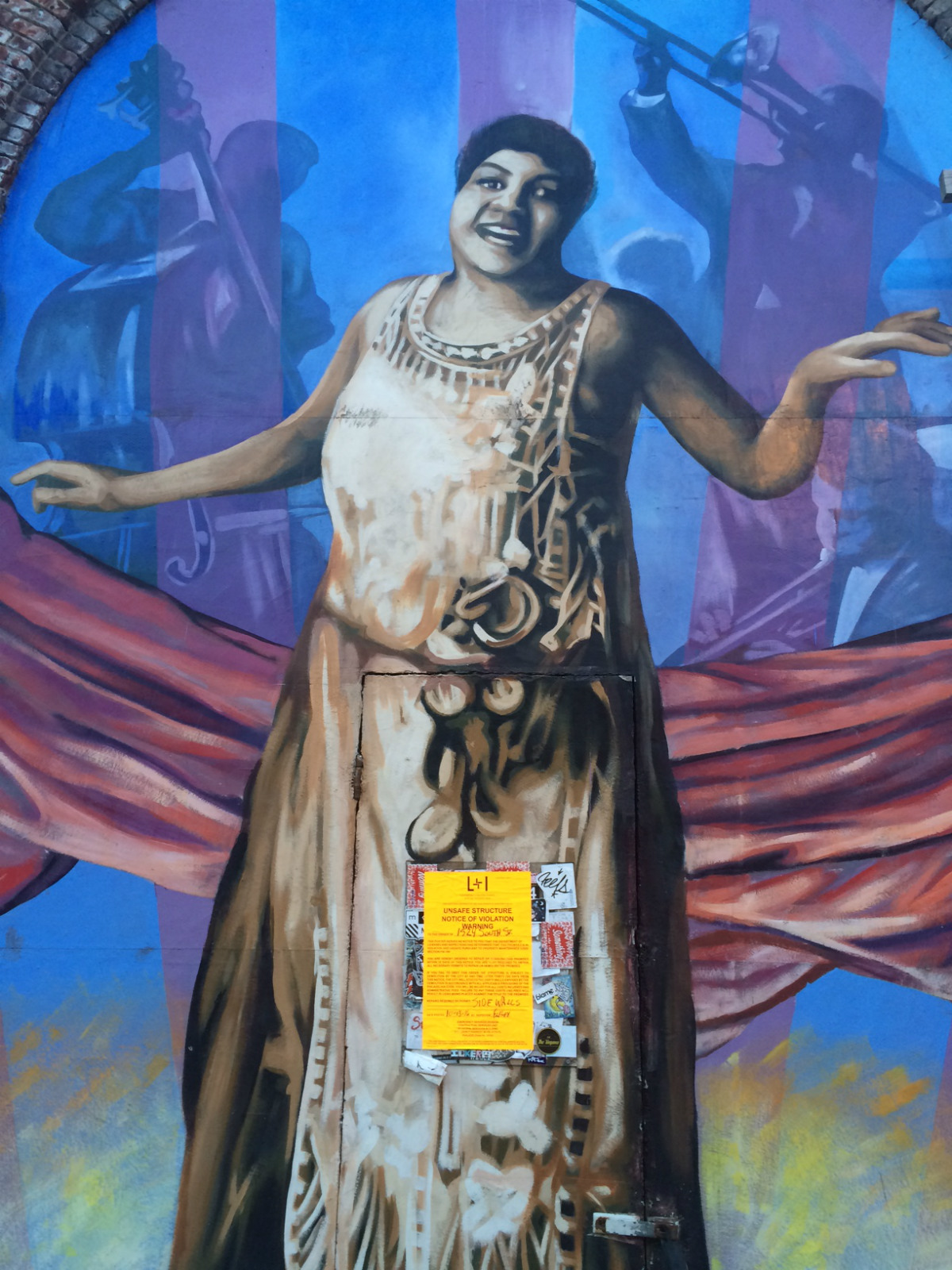 A notice is plastered over an 11-year-old mural on the Royal Theater on South Street. It notes the structure, which has been slated for renovation, is unsafe. (SAMANTHA MELAMED)


One goal, in the face of increased development in the city, is to create an expanded stewardship program. Ideally, Jacobi said, the mural agreement could be attached to the deed, and transferred when ownership changes.

"Without that legalization, they don't always see it as an added resource to their building," she said. "But that would take a lot of City Council support."

For now, the organization is often in the position of negotiating with a building owner to get repairs done before a mural can be restored -- or negotiating with the community when an artwork cannot be salvaged.

"Sometimes, we do have to decommission a project, and it's about letting it go away with dignity," Jacobi said.

Around six to 10 murals disappear each year. One recent one was an image of a children's church choir at 16th and Fitzwater: necessary wall repairs would have cost $20,000, so it was painted over instead. Another was the South Philly musicians mural at 9th and Passyunk, on another building too costly for the organization to fix. In the end, a new musicians mural was installed at a different location nearby. In West Philadelphia, the University of the Sciences is demolishing the Wilson School, and with it several murals -- but it will re-create one of the murals on its new, mixed-use building.

"It's surprising sometimes how attached people get to murals, even ones that, people will admit, are not the most eye-pleasing," Jacobi said. "Abstract murals or landscape scenes are easier to detach from, but when it's an image of a person, they see it as the memory of that person being visibly erased."

On Tuesday morning, artist David Guinn was starting restoration of a work called The Heart of Baltimore Avenue in West Philadelphia. It had a tile border that was beginning to fall down, a hazard for cars and people below. "And the yellows, the blues and the reds -- I guess that's all the colors! -- faded really quickly," he said.

He planned to revive the muted scene by laying translucent washes of green over trees and grass, putting a coat of blue atop the overcast sky, and touching up other details as needed. He'd remove the tiles, originally made by schoolchildren, and re-create the border in paint. And, he'd add a UV-protective sealant to the entire piece.

For the city's muralists, this life-cycle has become familiar. 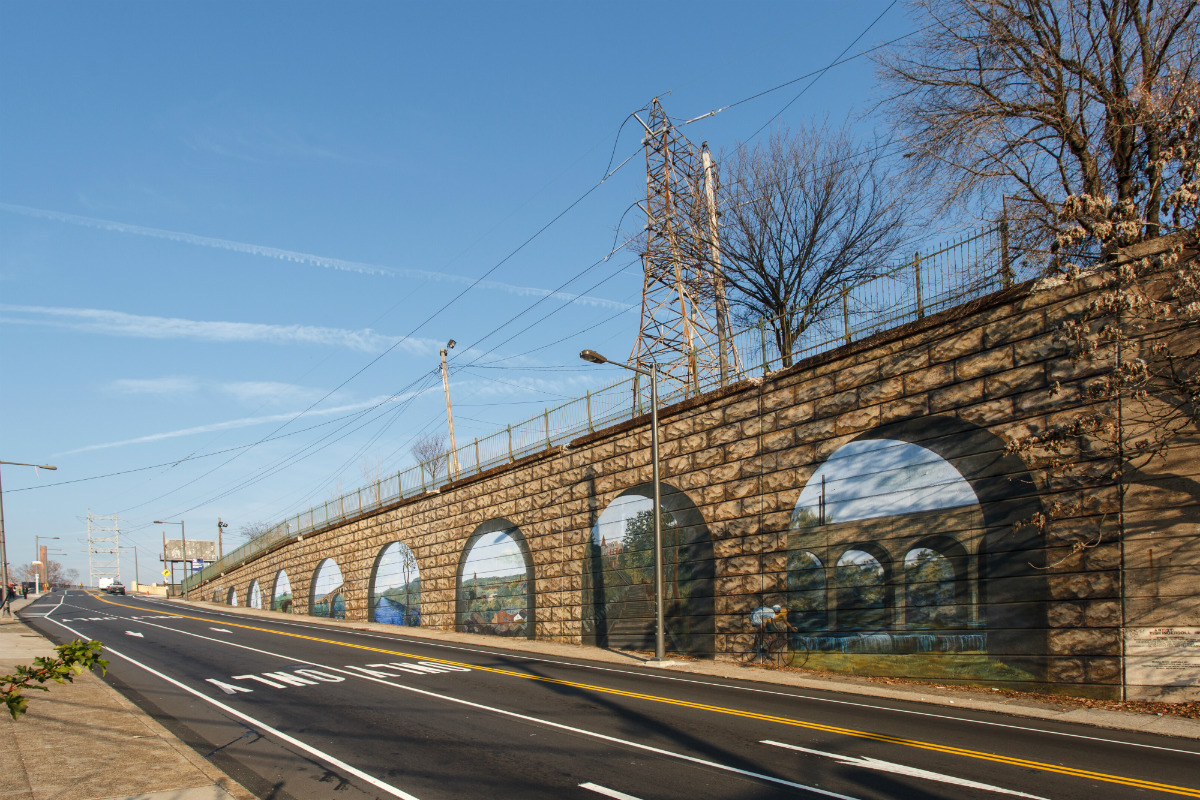 Of six murals she's painted, she said two have vanished, one covered over by new construction, another victim to a deteriorating wall.

"It feels OK because I'm giving them to a neighborhood. If the neighborhood changes that's just part of being a muralist," she said, looking over her image of cyclists rolling past a tromp l'oeil viaduct. "But this one, I'm so happy they can't cover it over."