Pennsylvania State University researchers rounding the bend on a year-long study of broadband access in rural Pennsylvania are finding that speeds are even s. . . l. . . o. . . w. . .e. . .r. . . than previously thought.

"There haven't been any improvements," Ed Bustin, a commissioner in Bradford County, said Wednesday. "Nothing has changed as far as what's currently available, as far as access and speeds."

Bradford County, on the New York border in Northeastern Pennsylvania, has slow connectivity speeds, but according to the most recent map available from the Penn State study, it's not among the worst. Adjacent counties like Sullivan and Wyoming had the slowest speeds, roughly 0-3 megabits per second, far below the FCC's 25 mbps benchmark for "high speed."

Few areas of Pennsylvania have internet download speeds that meet or exceed the FCC’s definition of broadband, according to the Pennsylvania Broadband Mapping Initiative, whose map is shown below. Click here to test your connection speed or find the typical speed where you live. 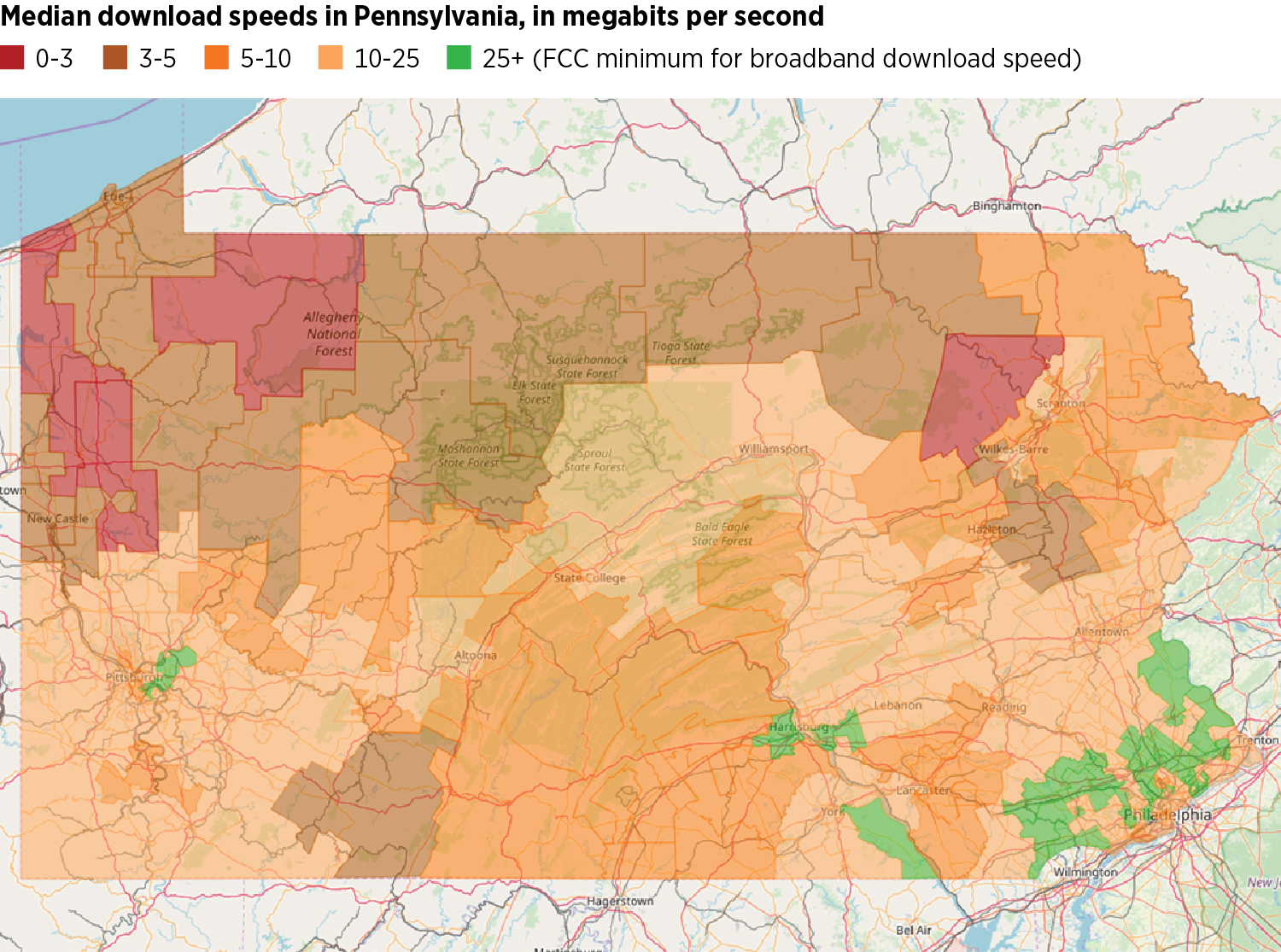 Penn State, with a grant from the Center for Rural Pennsylvania, began mapping the state's broadband access on Feb.1 and has so far conducted a half-million tests with public input on its website and through Google queries.

Penn State found speeds differed from what providers had been promising.

"What we are documenting is profoundly different than what we were told, the speeds far slower," said Sascha Meinrath, the Palmer Chair in Telecommunications at Penn State. "Places we were told have access appear to have limited to no access. The important word is appear."

A 2016 Federal Communications Commission report estimated that 39 percent of rural Americans, about 23 million people, had no access to 25 mbps broadband.

In Pennsylvania, the number is 803,645, about 6 percent of the population. Earlier this year, Gov. Wolf launched the "broadband initiative," an effort to offer financial assistance to internet providers who were bidding on service areas.

Those numbers may be larger, Meinrath said, because people who have good internet speeds generally don't check them.

A large swath of Northwestern Pennsylvania fell below the FCC minimum for "broadband upload speed" of 3 to 5 mbps, including most of Warren County, home to the Allegheny National Forest.

When the Penn State study wraps up early next year, Meinrath said, every congressional and state House and Senate district will have an assessment of how it fared. The data will also be available to the public so they know which elected official to call to demand action. That could include pressuring Washington to invest more in broadband or find more financial incentives to get providers to move into rural areas.

Broadband connectivity issues are problematic in most rural areas, and the ongoing debate over whether internet is essential infrastructure, the same as roads and electricity, or just a luxury used to watch movies and send email is growing increasingly one-sided.

"Someone is just going to have pick up and subsidize the costs," said Cynthia Morrison, a Warren County commissioner and a Republican.

Meinrath said he believes internet access is a "critical resource."

"Some very basic things can no longer be done unless you have connectivity," he said. "The last thing we want to do is have an infrastructure that divides. We've been contacted by a ton of small business owners and farmers who tell me, 'I can't do my work because my connection sucks.'"