The city will lower its projections for beverage tax revenue this fiscal year, saying the tax will bring in less than had been anticipated.

The 1.5-cent-per-ounce tax on sweetened beverages, in effect since January, has brought in $25.6 million, but will fall short of a projected $46.2 million for fiscal year 2017, which ends June 30. While the size of the shortage is unclear, to hit its projected target, the city would need to collect $20 million from May through June, a near-impossibility, the Kenney administration recognized, given that the highest monthly revenue so far has been $7 million in March.

As first reported by Billy Penn on Tuesday, the mayor's office said it would lower its revenue projections when it presents a revised five-year plan later this month, but it will keep in place its prediction for fiscal year 2018.

City officials expect collections for its tax on sugar-sweetened beverages will fall short of the goal for fiscal 2017, which ends in June. To reach its target, the city would need to collect an average of $10.3 million for May and June (including accruals), a figure well above its average monthly goal of $7.7 million, which has not yet been met. 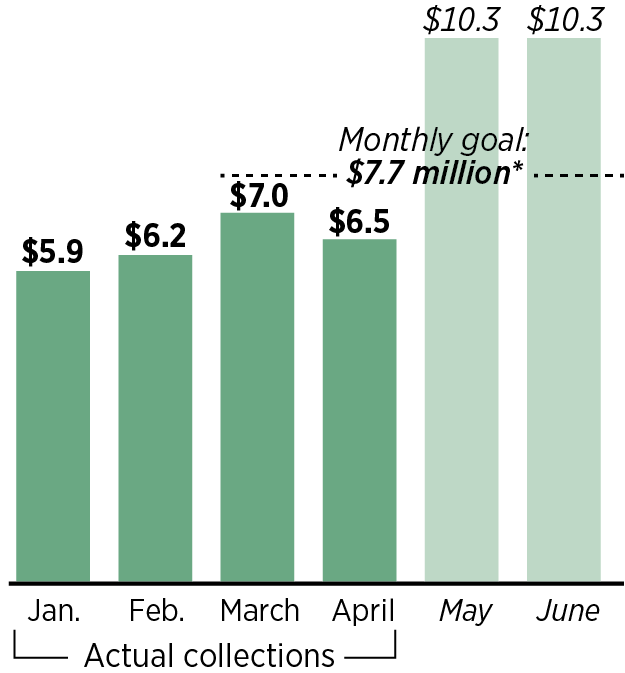 *The monthly goal was set at $7.7 million, beginning in March. Goals for the first two months of the year were lower: $2.3 million in January and $5.4 million in February. The city’s fiscal 2017 goal of $46.2 million includes a $7.7 million accrual.
SOURCE: Philadelphia Department of Revenue
Staff Graphic

City spokeswoman Lauren Hitt said the budget office still believes it will hit its fiscal year 2018 projection of $92 million for the tax because the levy is only four months old and the city is still "working out the kinks."

"We're not concerned. Out of the four months of collection, three were solid and very much where we expected to be, so we still expect to hit our long-term projections," she said.

Members of the Ax the Tax beverage coalition, backed by the American Beverage Association, called the news early evidence that the tax won't bring in enough to support the programs it funds. "Reality is finally catching up with the mayor's inflated projections," Dave McCorkle, president and chief executive officer of the Pennsylvania Food Merchants Association, said in a statement. "The city has yet to achieve its full collections target and is once again moving the goalposts."

City Controller Alan Butkovitz was skeptical, too, saying the deficit could create a "multimillion-dollar burden" for taxpayers, a concern Mayor Kenney's office was quick to dismiss as overblown and politically motivated.

Butkovitz, who has publicly criticized the tax, sent a letter to the mayor's office raising concerns over the shortfall and asking the city why, given the gap, it assumes revenue will bounce back in the next fiscal year. The city projected that it would need to bring in an average of $7.7 million per month, but has yet to hit that target in its first four months.

"The city appears to be creating a short-term and a long-term deficit through the beverage tax by not budgeting with true and accurate figures," Butkovitz said.

Hitt accused Butkovitz of weighing in for political reasons. Butkovitz opposed the tax during his recent reelection campaign in which he was defeated by Rebecca Rhynhart, a former city budget director. Butkovitz has also met with members of the American Beverage Association this spring.

"The controller has been very open about the fact that he intends to use his remaining months in public service to partner with the beverage industry to paint the tax in a negative light and to advance his own political career," Hitt said.

Butkovitz said the city was using politics to deflect attention from the numbers. "They admit they're not reaching their number, and their response is to say, 'Look over there,' " he said. "There's a shortfall. but we're going to stick to our initial faulty assumptions? That's not the way things are done."

In a letter responding to Butkovitz sent on Tuesday, city finance director Rob Dubow said the city was sticking with its long-term projections because early months were always expected to come in on the lower side of the $7.7 million – on average – the tax needs to bring in per month. He said inventory purchased just before the tax went into effect might have driven down revenue. Dubow also said the city expects seasonality – months when drinks tend to sell better – to make up for some of the slower months.

The city brought in $5.9 million in January, $6.2 million in February, $7 million in March and early returns show $6.5 million in April.

The city recently added 10 additional enforcement staff at an annual cost of $310,090 to continue spreading information on how businesses can register and remit payment.

The tax primarily funds a pre-K program and a city-wide rebuilding of parks and recreation centers, though spending on both programs will be halted while a panel of judges considers the legality of the tax in court.