Endgame in Aleppo, the most decisive battle yet in Syria's war

BEIRUT - When Syrian rebels surged into Aleppo in the summer of 2012, it was the high point of their still young, still idealistic revolution against President Bashar Assad.

Four and a half years and hundreds of thousands of deaths later, troops loyal to his government were poised to take the city back, heralding the end of an era for the rebellion.

With the rebels clinging to a tiny pinprick of territory in one corner of the city, it is now only a matter of time before the government reclaims full control over the country's biggest metropolis, an architectural and historical jewel that has now become a symbol of the catastrophe of the Syrian war.

A deal brokered by Russia and Turkey to rescue the tens of thousands of people still trapped by the fighting stalled on Wednesday amid indications that the Syrian government and allied Iraqi militias do not agree with the plan to evacuate fighters and civilians to rebel-held territory elsewhere.

Residents reported renewed artillery attacks on the rebel-held enclave and a brief cease-fire intended to facilitate the evacuations appeared to be breaking down.

But exact details were unclear, and U.S. officials said they were doubtful it would be implemented fully, if at all.

"We remain skeptical," said one U.S. official, speaking on the condition of anonymity to discuss a quickly changing situation. "We've seen these kind of declarations before by the Russians and the regime, and just as many times we've seen them violated and broken."

If the evacuation does not go ahead, an even bigger nightmare could unfold, U.N. agencies and human rights groups warned. Jens Laerke, the U.N. humanitarian spokesman, called the scenario in Aleppo "a complete meltdown of humanity."

There have already been disturbing reports of abuses as Assad loyalists converged in recent days on former rebel strongholds that had been fighting against the government. The U.N. Human Rights Council said it had been given the names of 82 civilians who were killed in summary executions in two neighborhoods on Monday. According to Rupert Colville, spokesman for the Office of the U.N. High Commissioner for Human Rights, the reports asserted that Syrian soldiers and allied Iraqi militiamen had entered homes and killed people "on the spot." Among them were 11 women and 13 children, he said.

Tens of thousands of people who fled the neighborhoods overrun in recent days have sought refuge in the tiny enclave still under opposition control, joining the residents who were already there and creating chaos in the cramped streets. People stumbled over the bodies of the dead as they fled for their lives ahead of advancing government troops, and they now fear for their lives should they be caught, said Zouhir al-Shimale, an activist who lives in one of the last rebel-held neighborhoods.

Most people now only want the chance to escape the area safely and welcomed the news of Tuesday's deal with "a kind of shock of happiness," said Shimale, who was among those who joined in the uprising against Assad's rule. But now, he said, all anyone can think about is getting out. 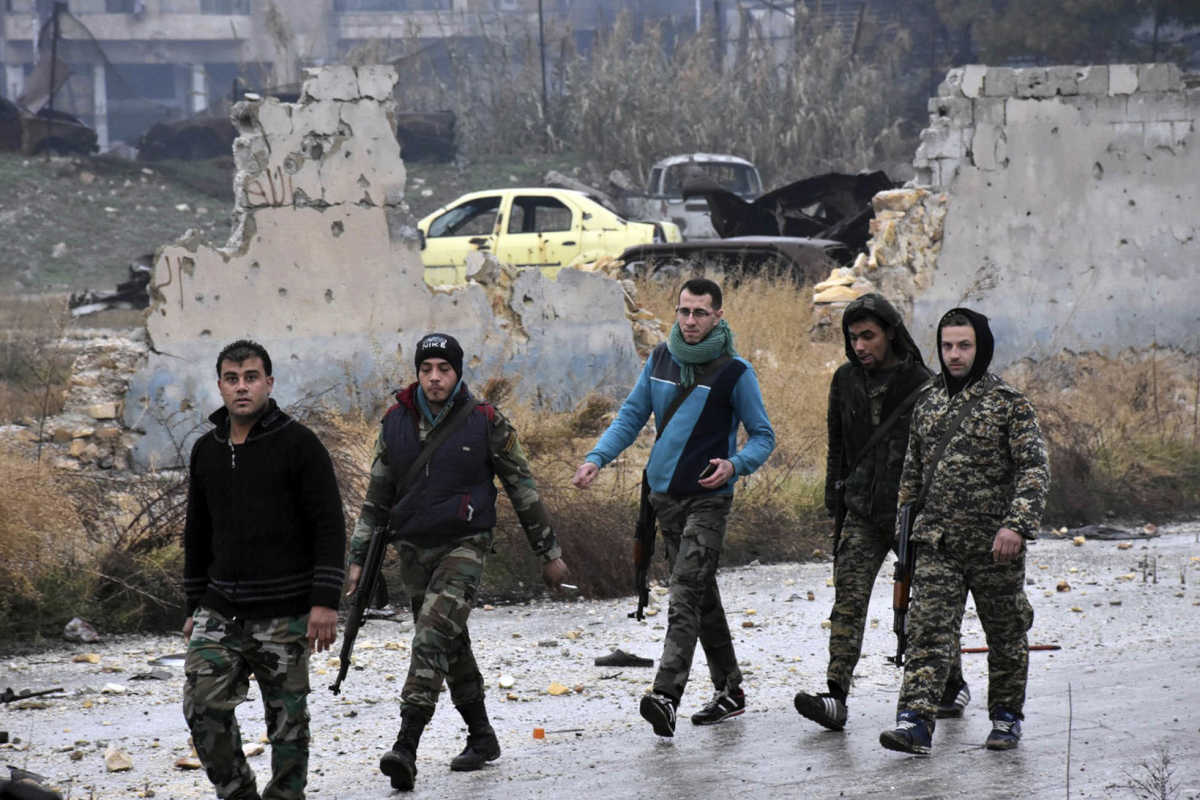 The rout of the rebels gives the Assad government its biggest victory yet in the five-year-old war. It won't, however, change the course of the conflict, which was all but sealed by Russia's military intervention more than a year ago. That Assad is in no danger of being toppled has been clear since Russian airstrikes began turning back rebel gains, putting beyond doubt that the opposition would ever be able to overthrow his regime in Damascus.

It also won't end the war. The rebels still control large areas of northwestern Syria, much of the countryside of southern Syria and several pockets of territory around Damascus and near Homs.

But the endgame in Aleppo does change the parameters of the conflict, leaving the rebels with no hold over any strategically significant area of the country and no real bargaining chip to try to force the government into a negotiated settlement. Coming weeks before the inauguration of a new U.S. president, Donald Trump, it leaves the Obama administration's five-year-old policy of using rebel gains to force Assad to compromise in shreds.

The bloodshed could now intensify, diplomats fear, as an emboldened government, backed by its Russian and Iranian allies, steps up its efforts to fulfill Assad's promise to reclaim all of the territory lost to the rebels.

Whether they can, at least any time soon, is a different question. It has been three years since government forces turned the tide in Aleppo and began taking back rebel areas.

And the war, which has claimed, by most estimates, at least 400,000 lives, has since become much more complicated.

The Islamic State now controls more than a third of the eastern part of the country, and has drawn the United States into Syria's war. While attention was focused on the battle for Aleppo, the militants recaptured the Syrian city of Palmyra, overrunning in just three days loyalist positions that had been depleted by diversions to the Aleppo front.

Syrian Kurds are now governing a big area in northeastern Syria that Assad has also said he wants to reclaim. Turkish troops have intervened in another area of the north of the country and control a chunk of territory alongside a force of allied rebels.

"Two things are absolutely clear here," said the U.S. official. "One, the regime doesn't have capability to end this war, even with Russia's backing, and the scorched-earth approach that they're taking is only going to attract more extremists."

Aleppo will nonetheless be remembered as a symbolic milestone, the final death of a dream of a more democratic Syria that had waned long ago. The brutality of the government crackdown and the reluctance of world powers to pressure the Assad regime into softening its tactics exposed shortcomings in the global system of laws and norms designed to ameliorate the suffering of civilians in war.

Aleppo represents "the death of respect for international law and the rules of war," according to David Miliband, who heads the International Rescue Committee, an aid agency.

U.S. Sens. John McCain and Lindsey O. Graham, who have long advocated a more assertive U.S. policy toward Syria, said Aleppo would go down in history as one of the great failures of the international community to halt human rights abuses.

"The name Aleppo will echo through history, like Srebrenica and Rwanda, as a testament to our moral failure and everlasting shame," the senators said, citing the locations of major atrocities in the Bosnian war and in Africa.

And Aleppo also became a symbol of the failures of the Syrian revolution, which began with peaceful protests against a dictatorial regime but mutated into an armed rebellion that also violated many of those international rules.

In Aleppo, rebels looted homes and factories. They squabbled, fragmented and turned on one another, even in the last days of the siege, battling one another for control over stockpiled weapons, according to rebel commanders and residents of the city. A sizable number embraced the extremist visions of Islam that so alarmed the United States and its Western allies that promises of more significant support were never fulfilled.

And now the shattered city stands as a symbol too of a wrecked and polarized country. West Aleppo, which always remained in government hands, is still largely intact, though rebel shelling killed many civilians there, too. Tens of thousands of civilians from eastern Syria have sought refuge there in recent days, streaming across the front line clutching bags and blankets.

East Aleppo, which was under rebel control, is destroyed.

Syrian state television broadcast live footage throughout the day on Tuesday showing its reporters roaming through the ruins of the newly reconquered neighborhoods, trumpeting the government's victory as they climbed over piles of rubble, peered into abandoned homes and sifted through the remains of rebel defenses. There was no other sign of life in the empty streets.
Pence plays role of Trump's ambassador to nervous Republicans