Pennsylvania's now the fifth largest state in the country, and other takeaways from the new Census numbers

Pennsylvania's population has recovered from a historic dip last year, and is continuing to rise slightly over time, but it's not enough to overtake the growth in other states in the South and West, according to new population estimates released Wednesday by the U.S. Census Bureau.

But some other states grew even faster, continuing long-term shifts in the country's population centers.

Here are some takeaways from the new data:

Pennsylvania is on track to lose a congressional seat

Every 10 years, the Census determines how the 435 voting members of the U.S. House of Representatives are divided among the 50 states. Each state is given one seat, and the remaining seats are divided proportionately among the states according to population.

Pennsylvania currently has 18 House seats and New Jersey has 12.

Every decade since 1910, Pennsylvania has lost at least one seat in the reapportionment process, and the next round, which takes place after the 2020 Census, looks to be no different: At the current population levels, Pennsylvania would lose one House seat. New Jersey would keep its 12 seats.

Winners and Losers in House Seats

The change in the number of House seats for each state if reapportionment took place today.
Staff Graphic

The number of congressional seats also determines the number of votes each state has for president in the Electoral College. A loss of one congressional seat and one electoral vote is not huge, experts have said, but is representative of a larger weakening of Pennsylvania's clout on the national stage: Pennsylvania had 36 U.S. House members in 1910, 18 today, and that number is set to continue falling.

Of course, with another three years, those numbers will continue to shift, though Pennsylvania is unlikely to gain enough population to offset the growth in states such as Colorado, Florida, North Carolina, Oregon, and Texas, which would all gain congressional seats if reapportionment took place today.

Also to be seen is the effect of Puerto Rican migration into the continental United States, particularly Florida. About 215,000 Puerto Ricans left the island for Florida in the three months since Hurricane Maria; one study estimates more than 470,000 people will leave Puerto Rico over two years.

Pennsylvania is now the fifth largest state in the country

Pennsylvania is once again the nation’s fifth-largest state, topping Illinois in population for the first time since 1997.
Staff Graphic

In 1998, Illinois passed Pennsylvania to become the fifth most populous state. By the 2000 Census, Illinois had about 130,000 more people than Pennsylvania, and both states continued to grow until 2013, when Illinois' population began to fall.

This year, Pennsylvania switched places with Illinois to again become the fifth most populous state.

Ranked by population as of July 1, 2017.
Staff Graphic

Most of Pennsylvania’s growth comes from international immigration

A look at the major components in the state’s overall population growth of 18,452 residents between 2016 and 2017. 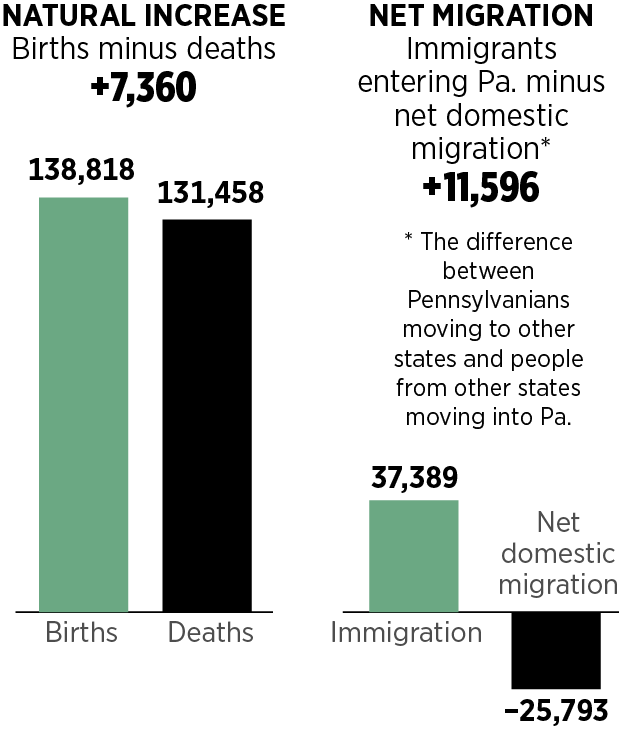 The Census Bureau breaks down each state's total population change into two main types: Natural increase is the net change from births and deaths, and net migration is the change from people moving into and out of the state.

Net migration is broken down into two types, international and domestic.

In one year, a net total of 37,389 came to Pennsylvania from other countries and Puerto Rico; some of that was offset by a net domestic loss of 25,793 people leaving Pennsylvania for other states.

New Jersey has one of the largest immigration flows into the state, but it’s offset by people leaving for other states

Moving Out,
And Moving In

The states with the largest net domestic migration losses and gains between 2016 and 2017. 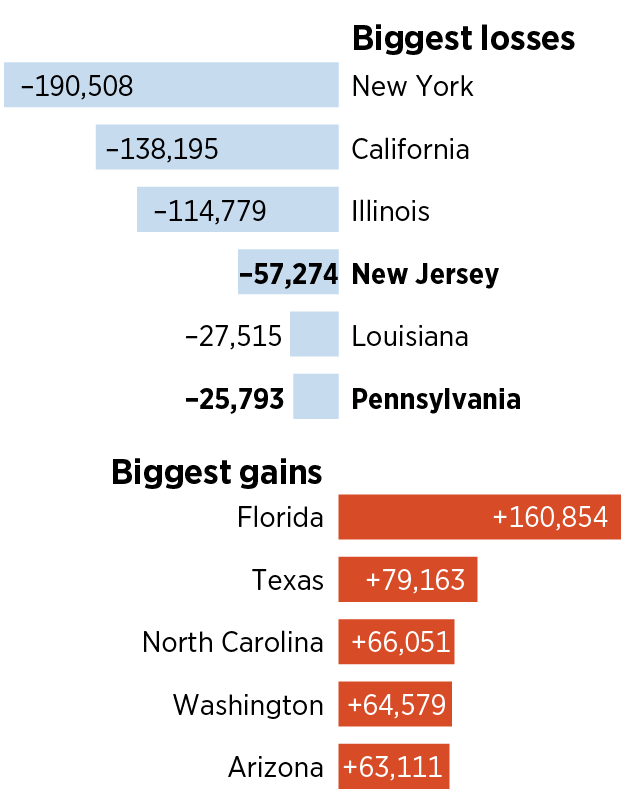 New Jersey had the fifth-highest international net migration, with 56,942 people entering the state from other countries and Puerto Rico. That means 1 out of 20 people coming to the United States ended up in New Jersey.

But the Garden State also has the fourth-highest net domestic loss: In the same time period, 57, 274 people left New Jersey for other states.

As a result, New Jersey ended up with a loss of 332 people due to migration of people in and out of the state.