Philadelphia's tax on sweetened drinks has lacked the revenue fizz that officials anticipated, and the city is downsizing plans for the programs it's intended to fund.

In Mayor Kenney's budget proposal, which he will unveil Thursday, the tax's projected revenues are lowered by about 15 percent. The controversial tax, the first of its kind in the nation and closely watched by other cities, will likely bring in $78.8 million in the current fiscal year, officials said — about $13 million less than the city had planned in its current budget.

As a result, the city has decreased the number of pre-K seats and community schools it planned to open in the next five years. Instead of expanding the free pre-K program to serve 6,500 children by fiscal year 2023, the city is estimating a maximum of 5,500 seats. The number of projected community schools has also been cut, from 25 to 20. And spending for the Rebuild Initiative to improve parks, libraries, and recreation centers will be scaled back, according to Finance Department officials.

Philadelphia’s tax on sweetened beverages generated nearly $79 million in its first 12 months, falling 15 percent short of projections, prompting a reduction in the monthly revenue goal for fiscal 2019.
Monthly beverage-tax revenue in 2017, in millions 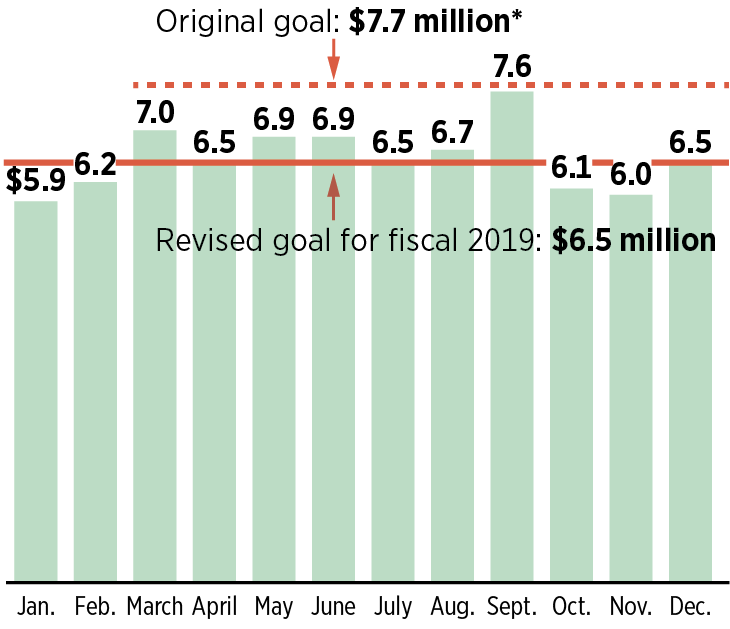 The adjustments are certain to renew criticism from opponents of the 1.5-cent-per-ounce tax on soda and other sweetened beverages. The American Beverage Association, beverage distributors, and store owners have railed against the levy as not only harmful to their businesses, but also unsustainable, citing the revenue shortfalls.

City officials said initial projections were off because revenue estimates are difficult for new taxes. "To be coming within 15 percent of that original estimate, I think we're actually pretty proud," said Anna Adams, the city's budget director.

Opponents of the tax disagree. "I think this highlights exactly what we've been saying all along: That this tax isn't a sustainable long-term revenue source for important programs like pre-K that enjoy widespread support," said Anthony Campisi, a spokesman for the Ax the Beverage Tax campaign. "The fact that the mayor overestimated revenue projections is going to have real impacts on Philadelphia families who have been promised an increase in pre-K seats and now some of those seats aren't going to materialize."

Separately, because the Pennsylvania Supreme Court will consider a challenge to the tax, the city has not yet fully expanded the programs it funds. Under a new five-year plan released Thursday, more pre-K seats and community schools will be added in fiscal year 2020, when officials expect the litigation will be over.

Even with delayed implementation and scaled-back estimates and programming, officials proclaimed the tax a success.

"Thousands of children are getting access to pre-K and to community schools that they would not have gotten without this tax," said Rob Dubow, the city's finance director. "So from our perspective, it's a big success."

Beginning in fiscal 2020, the city plans to spend reserves it saved from beverage-tax revenue while the program expansion was on hold.

The tax is projected to account for 2 percent of the city's $4.61 billion general fund revenue in the next fiscal year.

We Recommend
Pandemic takes no holiday as coronavirus cases and deaths grow in N.J. and Pa.; Philly cops break up massive Memorial Day party
Joseph A. Gambardello, Oona Goodin-Smith, Erin McCarthy and Rob Tornoe
The massive Philly refinery site sale is about to close. Here’s what we know about the developer buying it.
Andrew Maykuth
Reopen protest held on Memorial Day down the Shore; South Jersey church will face ‘repercussions’ for reopening
Rob Tornoe
Manhunt underway in Poconos for UConn student suspected in two slayings
Rob Tornoe
Sen. Cory Booker renews effort on Memorial Day to get names of 74 sailors added to Vietnam Veterans Memorial
Maddie Hanna
Colleges had to adapt to virtual final exams. What they learned could shape the future on campuses.
Susan Snyder
We Recommend
We Recommend
Inquirer Morning Newsletter