Police arrested one man early Friday in connection with a spray-painted message intended to deface the statue of former Mayor and Police Commissioner Frank Rizzo outside the Municipal Services Building.

The suspect is a 40-year-old man from Germantown, according to a police source. He was expected to be charged with criminal mischief, institutional vandalism, and possession of an instrument of crime. The full identity of the suspect was being withheld Friday morning pending charges.

The statue was defaced late Thursday with the message "Black Power" spray-painted in white, following calls for its removal. In the aftermath of last weekend's debacle in Charlottesville, Va., the Rizzo statue has become the focus of renewed criticism. Meantime, city workers power-washed the message from the statue early Friday. 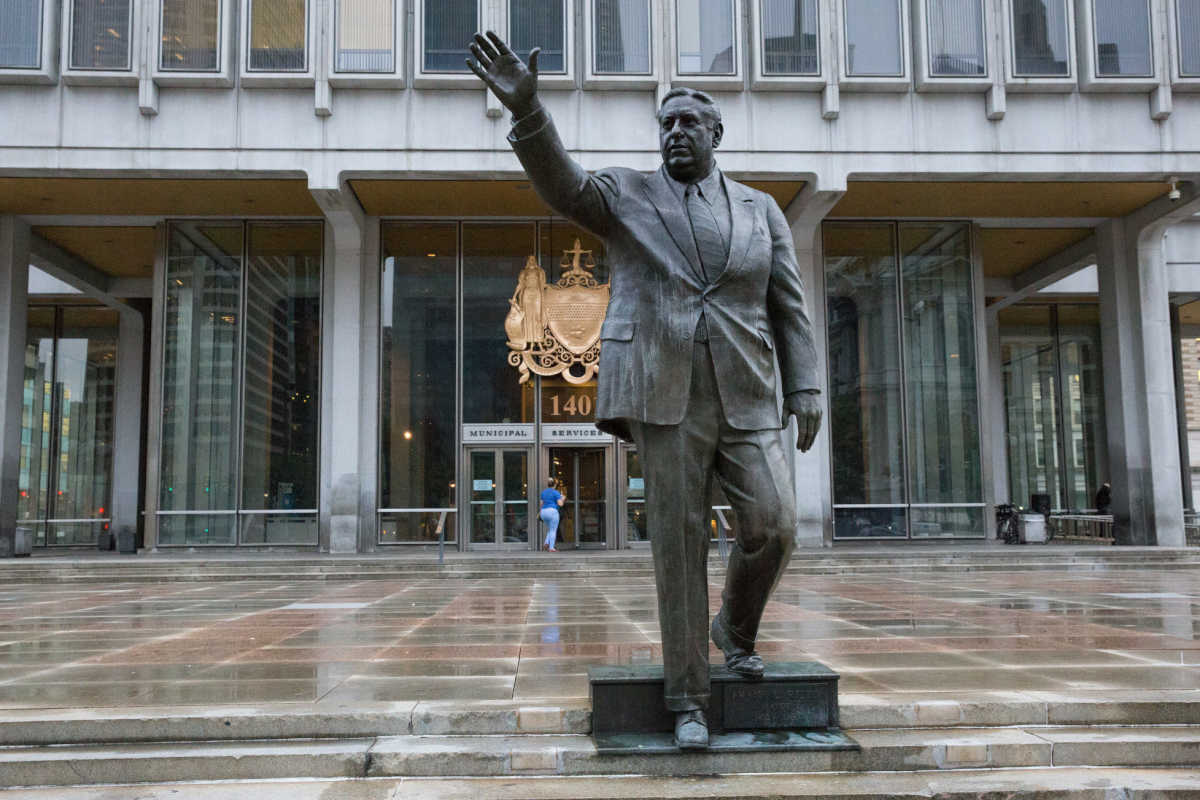 The vandalism came during an unguarded moment. On Wednesday morning, the statue was egged and, for much of the time afterward, was guarded by police, including during a "Philly is Charlottesville" demonstration later Wednesday that drew Black Lives Matter activists to the site at 15th Street and John F. Kennedy Boulevard.

At 11:06 p.m. Thursday, officers responded to a radio call for "vandalism in progress" in front of the Municipal Services Building. In addition to spray-painting the Rizzo statue, someone had written the words "The Black community should be their own Police" on the steps of the building. The suspect then walked to a parked 2005 Toyota station wagon and entered on the driver's side before leaving the area, police said.

Video of the defacing of the Rizzo statue was posted on Twitter:

Here you go @6abc @briantaff6abc (No, I did not film this..it was already posted on social media. smh) pic.twitter.com/S0MgmlsoK2

Thousands of people joined the Broad Street march aimed at showing solidarity with victims of the Charlottesville, Va., attack, and a smaller group of protesters remained by the statue Wednesday night.

"The statue is going to come down one way or another," said Asa Khalif, a member of the  Pennsylvania chapter of the Black Lives Matter Movement. "It stands for generational hurt, oppression, injustice, homophobia, anti-blackness."

Khalif posted an image of the defaced Rizzo statue early Friday on Twitter:

Thursday's vandalism followed days of calls from civil rights activists and others to have the statue removed.

Councilwoman Helen Gym said on Twitter that the statue should go, and Mayor Kenney, a fellow Democrat, said it was time to discuss its future.

All around the country, we're fighting to remove the monuments to slavery & racism. Philly, we have work to do. Take the Rizzo statue down.

In an interview earlier this week, former City Councilman Frank Rizzo Jr., now 74, said his father was an advocate for all law-abiding Philadelphians. Many former police officers contacted him Tuesday, he said, worried that the statue was at risk. The thing about his father was, above all, "he loved this city," Rizzo Jr. said. So much so that he died in his campaign office July 16, 1991, running to be elected again as mayor.

Rizzo Jr. said he once encountered an African American woman paying her respects to the statue. The woman had walked into the mayor's office seeking help for her son, who was spinning out of control. Rizzo Sr. personally called him on the phone and told him to come to City Hall. He got him a job that day. "She said, 'He helped me out, and saved my son's life.' "

This is a developing story. Please check back for updates.