One of Pennsylvania's largest counties hasn't sent a rep to Congress for years. These candidates are likely to change that.

Montgomery County has a chance to send a home county representative to Congress for the first time in years. Under new congressional maps, Pennsylvania's third most-populous county makes up the center of the Fourth District, drawing three well-known Democratic contenders for a primary next week. The primary is likely to determine who represents the county in Congress next year.

Previously parceled out into five congressional districts, dispersing its voting power, Pennsylvania's third-most-populous county hasn't had a member of Congress who lives within its borders for more than three years. But the county now makes up nearly all of the newly created Fourth District, all but assuring it of sending one of its own to the House.

The opportunity, and the district's heavily Democratic lean, has drawn three well-known Democratic contenders for a primary next week that is likely to determine who restores the county's local representation in Congress next year.

State Rep. Madeleine Dean, gun control advocate Shira Goodman, and former Congressman Joe Hoeffel are all experienced political hands who have similarly liberal policy views and are trying to distinguish themselves ahead of voting Tuesday.

Each hailed the importance of electing a House member based in a county that, under the former map, had been split by three Republicans and two Democrats who live in Philadelphia and Bucks, Chester, and Delaware Counties. In all but one of those districts, Montco was just a sliver, diminishing its clout.

"For us to be divided up among five representatives, not one of whom lives in the county, it's just absolutely critical," said Dean, to have "a cohesive voice with one representative."

Added Hoeffel, who represented much of the county from 1999 to 2004, "It allows our member of Congress to focus on the county. … It pulls the county together, and I think it's very good news."

The county has long been split into several congressional districts, but at least one typically had a sizable Montgomery County portion, usually enough to send a county resident to Congress — most recently Allyson Schwartz, who served in the 13th District until the end of 2014.

When Schwartz ran for governor, however, three Montgomery County Democrats ran to replace her, splitting the primary vote while Philadelphia's Brendan Boyle won the nomination and then the seat in a district evenly split between the county and the city.

At 41, Boyle is young enough to serve for years to come, which seemed to leave Montgomery County Democrats with almost no path to Congress.

But the new map imposed by the Pennsylvania Supreme Court to correct what it ruled was unconstitutional gerrymandering created opportunity.

The population of the new Fourth District is more than 95 percent in Montgomery County, according to 2010 census figures. Boyle now lives in a neighboring district. 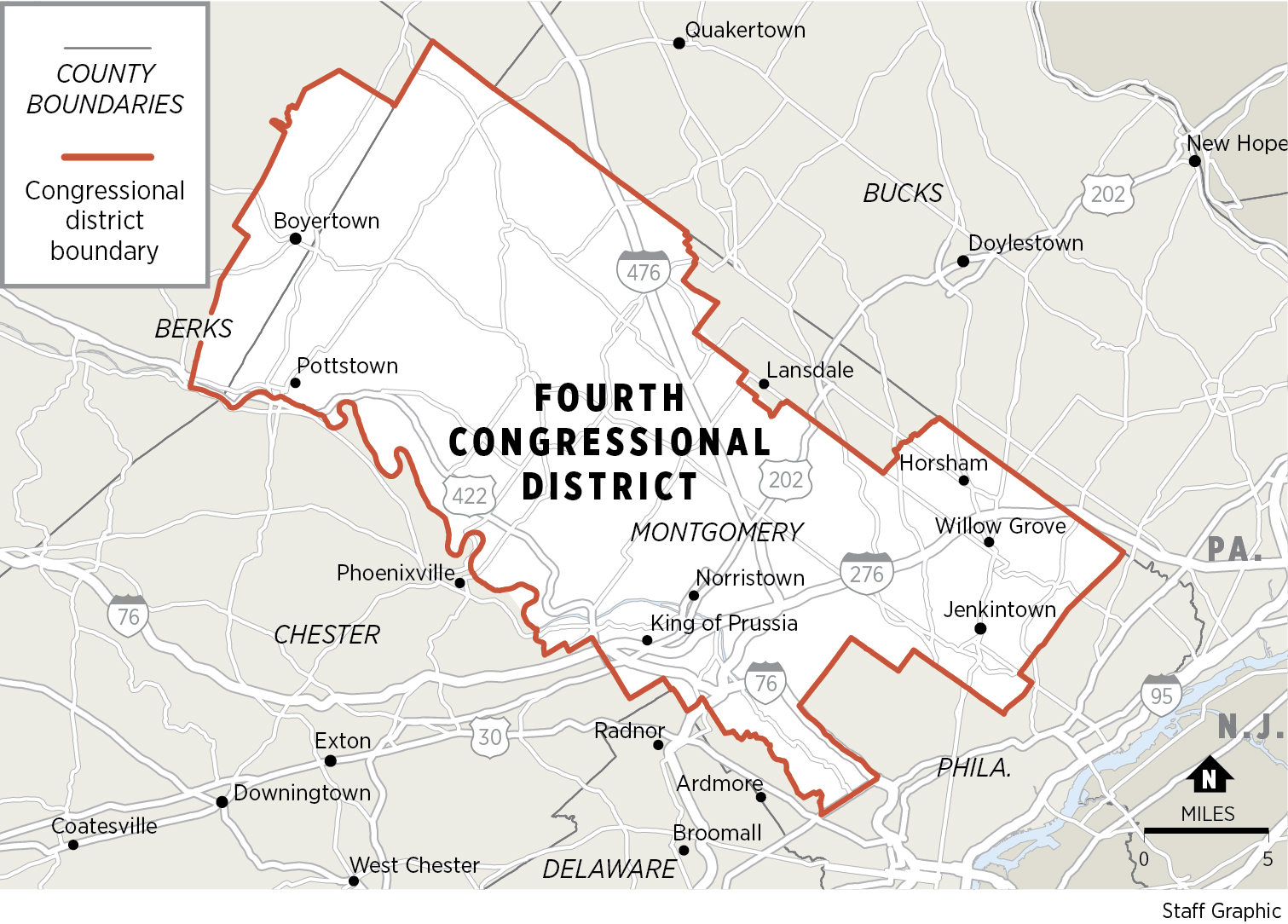 “This is the first thing there’s ever been an opportunity for me to run for,” said Goodman, 47, of Dresher. She supported Boyle and the Democrats who represented her in the legislature, and so did not want to challenge them.

Since 2012 she has led the gun control group CeaseFire PA.

"In the last year and a half, since the 2016 election, I've been thinking and just questioning, 'How do you work for a broader agenda, how do you be part of a bigger fight?'" Goodman said. "Because there's a lot that's just concerning me about what's happening in Washington."

Dean, a former English professor and attorney, said that after more than five years in Harrisburg, she has been frustrated "playing defense" in a legislature run by Republicans.

"I have been searching for ways to expand my service, specifically after the election of Donald Trump," said Dean, 58, of Abington. "Gov. Rendell called me when these maps opened up, and he said, 'Mad, you need to run for this.'"

Hoeffel, too, said he was driven by the president.

His entry, however, has chafed some Democrats, who hope this year will see women gain a voice in Pennsylvania's all-male congressional delegation.

On policy, the three Democrats are in largely similar places: They oppose Trump's tax cuts, support the Affordable Care Act, and want tougher gun laws. They all want to put the brakes on Trump's power.

Dean has scored endorsements from leading party figures, including U.S. Reps. Dwight Evans of Philadelphia and Schwartz, the last Pennsylvania woman to serve in Congress. When another state representative, Mary Jo Daley, dropped out of the race, she also backed Dean.

"I bring current legislative fight and experience. I've been at this, I haven't been sitting at home yelling at my TV," said Dean, who said her first involvement in politics was while working on a Hoeffel campaign in 1978.

Goodman argued that voters are looking for voices from outside the traditional political establishment, and added that she has been at the forefront of one of the biggest topics of the moment: guns.

"People want to talk about it. I've actually been in the trenches fighting the NRA," she said. "I've been doing this since the summer of 2012."

Hoeffel, 67, of Abington, said his previous tenure in Congress means "I would be able to hit the ground running next January, no on-the-ground training."

While calling his rivals "good people" and "very capable," he said he alone would focus on balancing the federal budget, in order to keep safety net programs sustainable.

He would start by pushing to repeal Trump's tax cuts, projected to cost roughly $1.9 trillion in federal revenue over 10 years.

"The people that need the help aren't getting it now. We're cutting back on the social safety net, we're giving tax breaks to people who don't need it," Hoeffel said.

The winner of the Democratic contest will face Dan David, a businessman who is running unopposed in the Republican primary.

That race will play out in a district in which Hillary Clinton won nearly 60 percent of the 2016 presidential vote — helping explain why Democrats see such opportunity.

Jonathan Tamari
I cover national politics and policy from Washington, D.C., with an emphasis on Pennsylvania and New Jersey.