Mayor Kenney's team had a strong message for City Council on Thursday: Its budget plan isn't going to work.

In a briefing with reporters, Kenney's top finance aides said the funding package for the city's schools that lawmakers put together this week falls $240 million short of what is needed for the next five fiscal years.

The admonishment of Council's budget raises anew the questions of whether residents will be on the hook for more taxes — or if the School District will get less money. It also marks one of the only times that lawmakers and Kenney, who have long enjoyed a good relationship, have come to blows in public.

Whether the sides come to an agreement won't be clear until next week's meeting, when Council will have its last scheduled opportunity to put the finishing touches on a budget it needs to pass this month. 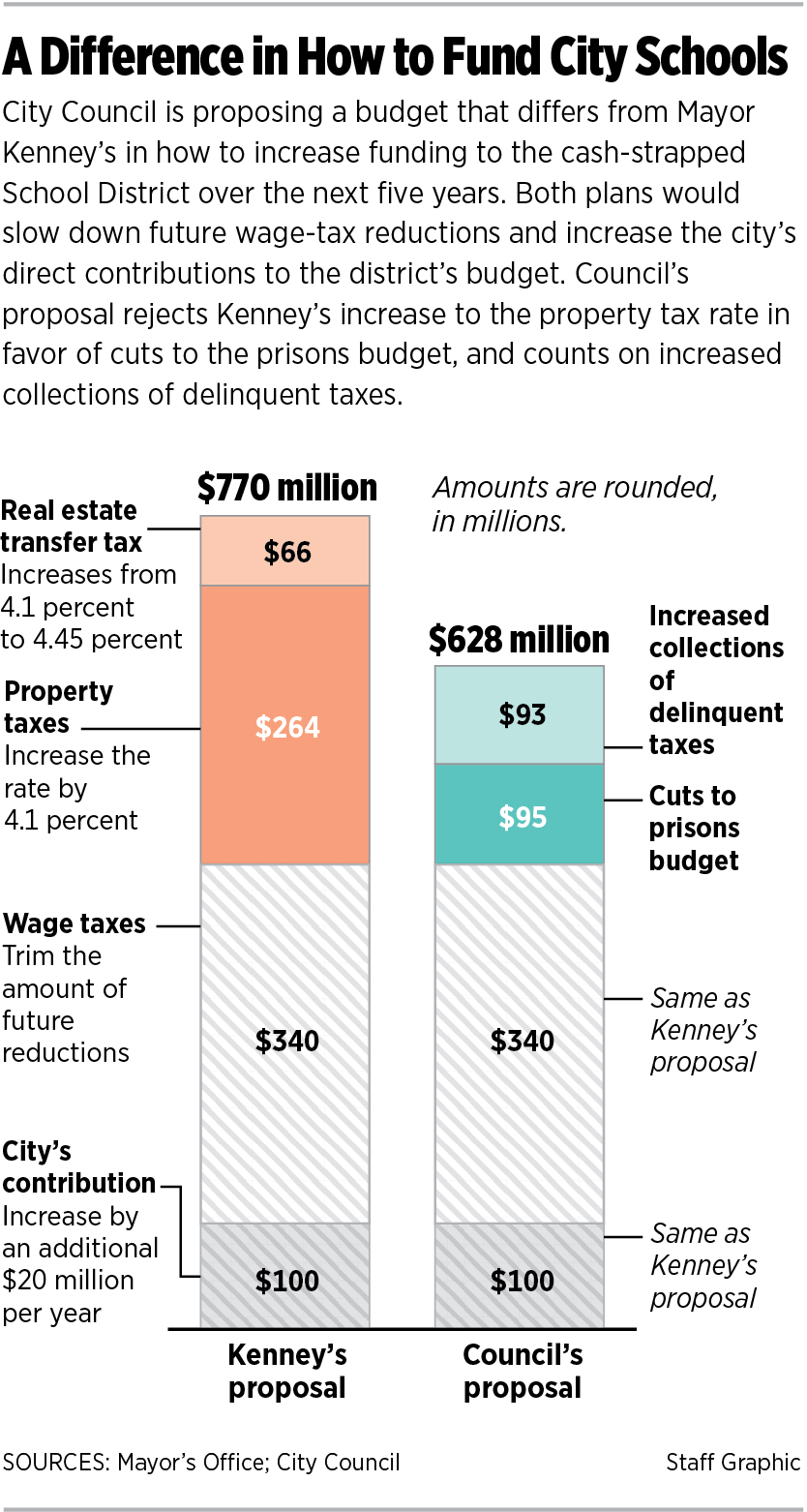 The plan by lawmakers, parts of which they gave preliminary approval to on Tuesday, would cut spending for the city’s prisons by $95 million over five years. It also projects up to $93 million in new revenue over the same time by improving the collection of delinquent taxes.

At the same time, Council voted to increase overall spending next fiscal year by $27 million beyond what Kenney proposed in his $4.69 billion budget.

All those changes, Council members said, would enable them to avoid Kenney's controversial proposal to raise real estate taxes at the same time that new property assessments have sent some residents' tax bills through the roof. The plan would also bring in an extra $600 million for the schools over five years, according to lawmakers.

But Dubow said the administration is not sure it will be able to raise close to as much money as Council expects through enhanced delinquent tax collections. Lawmakers planned to do a better job by beefing up a process called "sequestration," in which the city takes control of delinquent properties via a receiver in order to recover the debt.

Anna Adams, Kenney's budget director, said in a letter to Council members on Thursday that the city "fully intends to expand" the sequestration project. But "we are not yet confident enough in how much revenue it would generate."

Council's funding package would only bring in an estimated $530 million more for the schools between now and 2023, Kenney aides said.

The School District has said its budget gap is about $630 million over the next five years. The mayor's plan would raise $770 million.

Dubow also said the administration is concerned about Council's proposed cuts to the prison system. Kenney's aides said they had planned to use some savings reaped by closing one of the city's jails, the House of Corrections, to make changes to the city's criminal justice system.

For instance, Adams said, those prison cuts would help the city make up for lost revenue from eliminating a portion of cash bail, which District Attorney Larry Krasner has promised to do.

Councilman Allan Domb, who has called for the city to drastically cut the prisons budget in the wake of its declining jail population, again said that the city should be able to trim that spending.

"You can't even cut 5 percent of the overall budget?" Domb said of the prisons. "Come on."

As for the administration's argument that the city may not be able to raise as much money through improved delinquent tax collections as lawmakers hope, Domb called sequestration a "tremendous hammer."

"Eighty to 90 percent of landlords who get those notices" that their property will be seized by a receiver if they don't pay their taxes, "guess what they do? They pay their taxes."

"People simply are taxed up to here … and it's the responsibility of this City Council to protect the people's money," he said. "At some point, we have to say enough is enough."

Clarke did signal, however, that he was open to making further cuts to the budget, despite lawmakers' decision a couple days ago to boost spending.

Councilwoman Maria Quiñones-Sánchez said lawmakers increased spending in some cases because Kenney had made cuts that legislators wanted restored.

"I think it's very disingenuous when the administration removes previous Council allocations for important programs that they support and make us restore them, and then say we are on a spending spree," Sánchez said.

Kenney spokesman Mike Dunn said the programs Sánchez was referring to — such as the Philadelphia Eviction Prevention Project, a reentry program, and gun prevention programs — were items that had received one-time increased allocations in fiscal year 2018 and weren't expected to receive the same amounts in 2019.

Other amendments to the 2018-19 budget included: an extra $1.6 million to expand homeless services; $1.5 million more to the District Attorney's Office; and $965,000 for various nonprofit organizations to mentor at-risk youth, make neighborhood improvements and develop small businesses.

Councilwoman Cindy Bass, who had previously proposed making incremental budget cuts over the next five years, said she is hopeful her colleagues will agree to trimming next year's budget in the coming weeks. Council's last meeting is June 21, and the budget must be finalized by June 30.

"There are a number of things that my office proposed that didn't make it in the first cut, but I have had conversations with leadership and I fully expect that they will be in the second cut," Bass said. "I don't think this will be the final deal."