Republican lawmakers used detailed data on the partisan leanings of voters when they created the current Pennsylvania congressional map, according to documents federal judges had ordered them to turn over in a  trial that began this week.

Lawyers for House Speaker Mike Turzai and Senate President Pro Tempore Joe Scarnati had fought to keep private a trove of documents as they prepared for the trial, which began Monday in Philadelphia. They also sought to block the documents in a separate, state gerrymandering trial that begins next week in Harrisburg.

Among them are maps that contain detailed data on partisanship across the state, which experts said appear to confirm widespread suspicion that Republicans had intentionally drawn the map to favor their party. One map's database contains details for each of the more than 9,000 voting districts in the state, including the races and ethnicities of voters and results from state and national elections from 2004 through 2010. Also included are metrics that appear to rate each voting district's level of partisanship.

After the judges ordered the documents turned over, lawyers for the Republicans asked that anything not used as evidence in the trial — the data were not introduced, although analysis of it was — be destroyed within 24 hours of the trial's conclusion.

A spokesman for Turzai dismissed any suggestion that they were trying to conceal the dataset, which he said contained no proof of intent to gerrymander.

But similar datasets have become key pieces of evidence in other gerrymandering challenges across the country, including in North Carolina and in a case out of Wisconsin now pending before the U.S. Supreme Court.

Pennsylvania's map is considered one of the most extreme congressional gerrymanders in the country. Since the map's creation in 2011, Republicans have consistently won 13 of 18 seats in the U.S. House of Representatives, even as votes across the state have generally split evenly between Democrats and Republicans.

Republicans attempted to hide the data because it "undercuts their story in a big way,"said Michael Li, an expert on redistricting at the Brennan Center for Justice at New York University. "Why do you have all this data, right? 'I wasn't trying to flee the country, but I had $10,000 and my passport in a canvas bag.' "

Lawyers for Turzai and Scarnati attempted multiple times to block production of documents, to avoid depositions, to keep logs of documents confidential, and to keep testimony under seal. The judges rejected the bulk of those requests.

Steve Miskin, a spokesman for Turzai, said the data in question wasn't exclusively Turzai's by any means.

"There's a big fallacy about this data: Everybody used the same data," Miskin said. "There was no one caucus' data or one person's data. We all agreed on the data."

Lawyers at the Philadelphia-based Public Interest Law Center, which is bringing a state lawsuit against the congressional map, had also attempted to obtain documents from Turzai, but state judges blocked those attempts.

After the center's lawyers evidently were able to obtain a copy of the data and maps from the federal case, according to an expert report they filed, lawyers for the Republicans tried to block the data from being used in the state case.

Miskin said Turzai was not specifically attempting to keep the dataset and maps from being handed over but was trying to uphold the doctrine of legislative privilege, meant to protect legislators' ability to freely deliberate as they make law.

The Inquirer and Daily News obtained the data and are making it publicly available here.

In testimony read aloud in court Wednesday from deposition transcripts, a Republican staffer involved in the redistricting process, William Schaller, said mapmakers had election results data from a nonpartisan legislative agency that compiled information from the Pennsylvania Department of State. He confirmed that the data used included election results at the county, town, and precinct levels.

What’s in those spreadsheet and maps 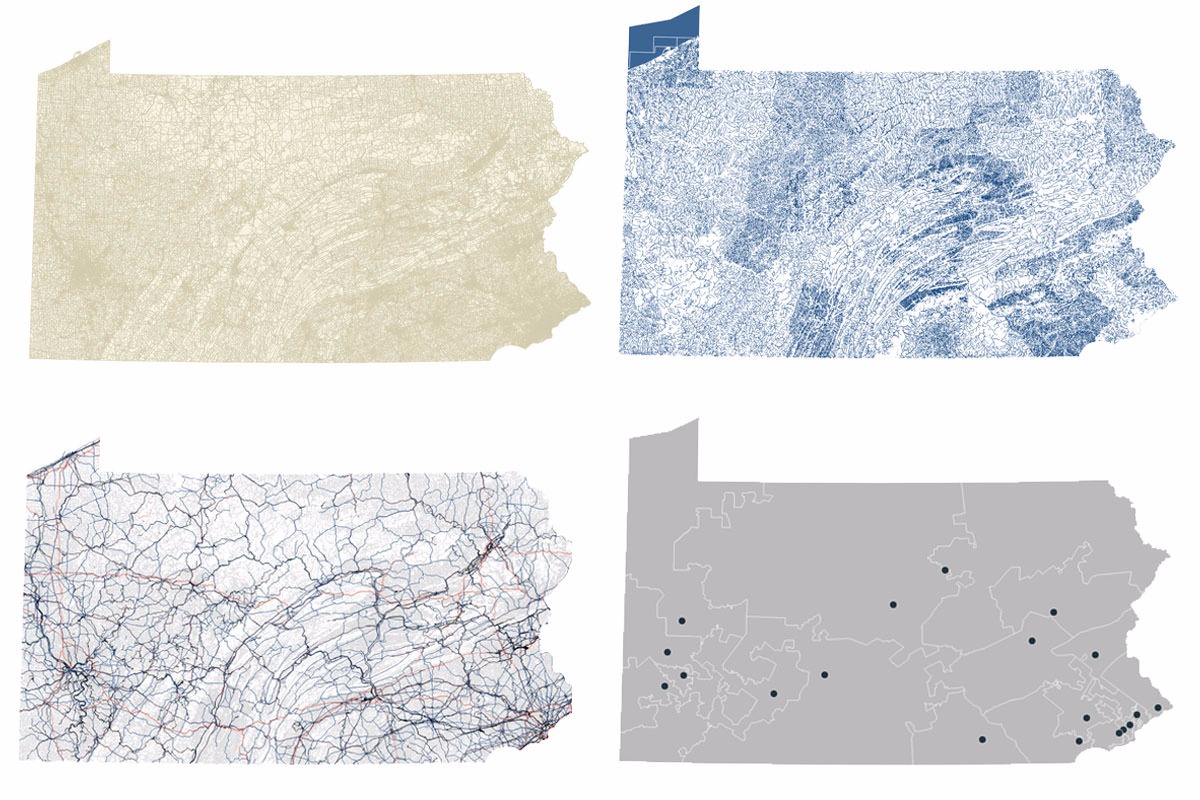 The documents obtained by The Inquirer and Daily News consist of files for 13 maps, each with a dataset attached. Some of those contain generally available data, such as major roads or bodies of water. Another shows the home addresses of the then-incumbent U.S. Representatives; courts have ruled that protecting incumbents is an acceptable principle for redistricting.

The map with the most detailed data contains information on each of the more than 9,000 voting districts in the state, with information such as racial and ethnic breakdown and election results for races from 2004 through 2010. Also included are the two partisanship scores that, while unclear how they were calculated, appear to measure how Republican or Democratic a precinct votes. The higher a positive value, the greater the margin by which Republicans won in those precincts; the lower a negative value, the stronger the Democratic advantage.

With that precinct-level data, maps can be drawn to precise partisan specifications.

What the experts say it means

"Given a congressional map that appears to seriously lock in members of the Republican Party, it's a little less benign," Levitt said.

Such data are actually required in some states, they said, for a positive purpose: To create competitive or politically neutral maps. That's not what happened here, they said.

"So you're left with, I guess, at least two plausible accounts: One is unbelievable incompetence," Gardner said. "And the other is … deliberately trying to partisan gerrymander."

Even before knowing for sure Pennsylvania lawmakers had the partisanship data, Stephanopoulos said, he was confident they had it.

In response to the "so-called experts," Miskin, the spokesman for Turzai said: "Clearly, by experts using the term 'gerrymandering,' and claiming that it's gerrymandered, they are biased."

Note: This story has been updated to reflect the number of voting districts statewide.