MOON, Pa. — In recent years, Democrats in this southwestern corner of Pennsylvania have been so beaten down that Alexandra Rizzo has had to write in her own name for Congress. Her party didn't even field a candidate  in 2014 or 2016.

"I got at least three votes in every election," she said — from family.

Yet Rizzo, 29, was among hundreds of optimistic Democrats waiting this week under overcast skies to see former Vice President Joe Biden campaign with Conor Lamb, a telegenic 33-year-old Marine and ex-federal prosecutor who has given the party hope of scoring an astounding upset in a special election Tuesday that would reverberate through Pennsylvania and the country.

The race for the open 18th District seat south of Pittsburgh has become the latest test of Democratic energy and backlash against President Trump, drawing a wave of national media attention and a deluge of Washington spending. The political stakes are so high that the race reportedly played into Trump's decision to announce tariffs on steel and aluminum imports, in hopes of stirring enthusiasm among the voters who strongly backed him in 2016, in a region long associated with coal and steel.

Trump and Vice President Pence have each visited to support the Republican nominee, State Rep. Rick Saccone. The national GOP has spent millions to prop up Saccone's campaign, and the president is due back again Saturday.

The heavy-hitting campaigning ahead of Tuesday's vote underscores the symbolism of this race because in strictly practical terms, the stakes are relatively small: a nine-month unfinished term that won't change control of the House.

Another election will follow quickly in November, when control of the chamber is truly at stake, and both candidates say that win or lose Tuesday they'll keep campaigning for the fall race. Lamb may even do it in a different district, since a new congressional map would shift his Mount Lebanon home out of the 18th.

Politics of the 18th Congressional District

The district has given strong support to Republican candidates in recent presidential elections. 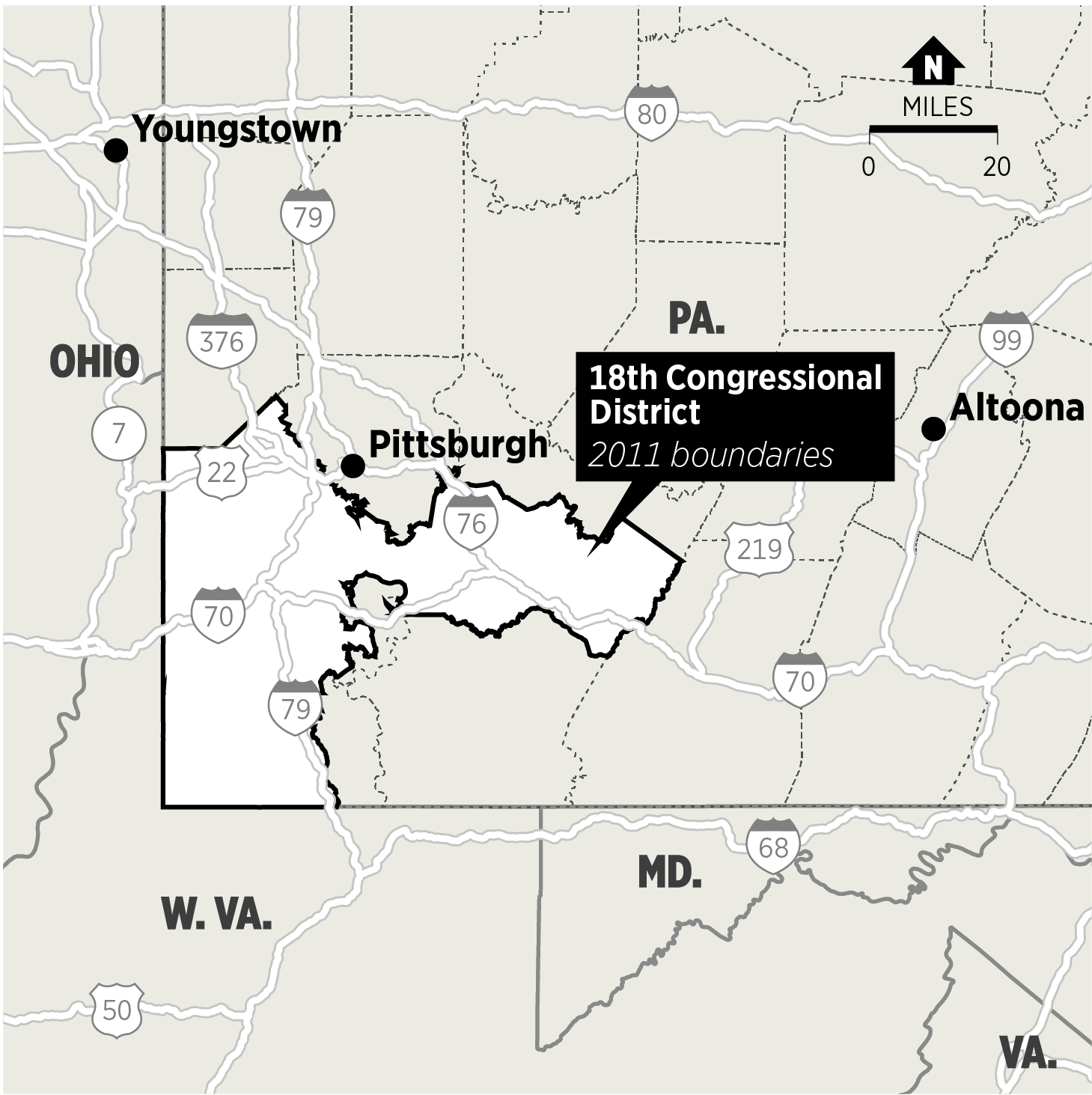 But given the deep-red district in play, members of both parties say that a Democratic victory could signal a coming political wave. A GOP loss, or even a narrow victory, could spark panic among any wavering Republicans, particularly in the competitive Philadelphia suburbs.

"If I'm a Republican out East and I see a Democrat win in this 18th District — a district that Trump won by close to 20 points — I might be rethinking my plans for the fall," said Mike Mikus, a Democratic political consultant from Western Pennsylvania who could barely contain his laughter at the thought.

The seat came open after  Rep. Tim Murphy, an entrenched Republican, resigned amid revelations that the antiabortion congressman had urged his mistress to get an abortion when he believed she was pregnant.

It should be safely Republican turf: A largely white district that includes prosperous suburbs of Pittsburgh sprawls through rural areas marked by billboards advertising firearms and coal. Democrats outnumber Republicans in the district by some 70,000, but the largely blue-collar voters here have long backed GOP candidates.

Yet public polls show Lamb with a narrow lead heading into the final days, and Pennsylvania Republicans privately say they have seen the same trend. Three state GOP insiders interviewed this week and granted anonymity to talk frankly about the race predicted a loss, citing the momentum behind Lamb and criticizing Saccone for a lackluster campaign.

A conservative state legislator who once sponsored a bill to require public schools to post "In God We Trust" and who believes the U.S. has suffered as traditional values have eroded, Saccone also has a doctorate in international relations, has taught college classes, and worked in counterterrorism in South Korea and Iraq.

As much as anything, the 60-year-old candidate has latched himself to Trump and is warning voters that the president's agenda is on the line.

"We've elected a president with an agenda that the people wanted, and he's getting beat up, mostly by the media," Saccone said Wednesday outside Range Resources, a natural gas company. Citing his long career in the Air Force, he said: "I want to be one of his wingmen."

Lamb, who knocked on doors this week in khakis and a blue Brooks Brothers blazer, has campaigned at arm's length from the image of his national party. His ads play up his law enforcement and military background (he was a prosecutor in the Marines and remains in the reserves), feature him shooting a rifle and promote his opposition to the Democrats' polarizing House leader, Nancy Pelosi. A graduate of the University of Pennsylvania and Penn law, he opposes a ban on assault weapons, but supports universal background checks. He cites his Catholic faith in personally opposing abortion, but says he would fight to keep the procedure legal in the name of separating church and state.

He supports Trump's tariff, has strong backing from labor unions, and has joined his party in assailing the GOP tax cuts, arguing that they mostly benefit corporations and the wealthy, not the broader public.

Asked what makes him identify as a Democrat, Lamb said: "Democrats are for working people."

If he can win over working-class voters who backed Trump, he might demonstrate a path forward for Democrats, who have been battered in these kind of rural areas, badly hurting them in 2016.

Yet his breaks with party orthodoxy also raise questions for a restive liberal base where many argue for the unbridled liberalism of Bernie Sanders or Elizabeth Warren.

Outside Lamb's rally with Biden at Robert Morris University, several Democrats said they wished Lamb was closer to their views on guns, abortion, and wealth disparity. But even those who described themselves as liberal still wore Lamb campaign pins, saying he gave them the best shot to win here — and send a message to Trump.

"While I can't wait for us to get rid of Trump, we can't do anything if we don't have the House," said Rizzo, of Upper St. Clair.

Nearby, Evelyn Harris said Lamb is "not as far left as I would like." Yet she and her husband, Richard Harris, were heavily motivated by antipathy toward the president.

And John Kulli, who taught medicine at the University of California, said he is to the left of Lamb on most issues, "but I'm not so stupid that I would support somebody who can't be elected."

In a district that Saccone calls "Trump country," however, Lamb will need support from more than traditional Democrats. He says the race isn't about the president, but about local issues and the two candidates.

Biden never mentioned Trump. Instead, he delivered a paean to the working class and assailed GOP attempts to cut Social Security and Medicare.

"I know this state, I know this region, I know what it's made up of, I know the values that underpin all of what you believe in – family, community, again, not leaving anybody behind. And so many people are being left behind by the policies we are dealing with today," Biden said.

Some Republicans argue that pundits shouldn't read much into the results of a special election likely to feature low turnout. But the national party's heavy spending says otherwise: GOP groups have poured in more than $9 million to aid Saccone, running ads that portray Lamb as a literal lamb shepherded by Pelosi, and attacking his stand against Trump's tax cuts.

Saccone said Lamb would be "led around by the nose" by Democrats' liberal leaders.

Democratic groups have spent a little more than $1 million.

In part, that's because Lamb has far out-raised Saccone — roughly $4 million to $1 million, and candidates can buy ads for lower rates than outside groups do.

Saccone's message has sunk in with at least some Republican voters.

In downtown Greensburg in rural Westmoreland County, Bill and Sandy Anderson, of Delmont, saw the race as a chance to stand up for Trump.

"For the first time in as long as I can remember we have somebody in office that represents us, and Saccone, he's going to go with that," said Sandy Anderson.

"He stands for more of what I consider my values," said her husband, a 72-year-old retired cost accountant for a local manufacturing company.

William Steiner, a Mount Pleasant resident who is volunteering for Saccone and opposes abortion, said Lamb's stand on the issue didn't persuade him – because the Democrat would still be part of a party whose leaders firmly back abortion rights. "He will not be able to carry out anything," said Steiner.

Whoever wins Tuesday won't get a break.

Saccone is already circulating petitions to run again in November, saying he will campaign in the same district, win or lose.

Lamb said he, too, will run in November — but he wouldn't commit to a specific district. He said that he is focused on Tuesday's election and that a decision on his next campaign will wait until he sees if the new congressional map drawn by the state Supreme Court withstands a GOP legal challenge.

Many Democrats expect that if the new map holds, Lamb will run in a neighboring district, against Republican Rep. Keith Rothfus. Lamb's home would be in that district, which would be far more competitive.

Still, it would mean taking on an incumbent — and another uphill run.