How Indiana's school voucher program soared, and what it says about education in the Trump era

Indiana lawmakers originally promoted the state's school voucher program as a way to make good on America's promise of equal opportunity, offering children from poor and lower-middle-class families an escape from public schools that failed to meet their needs.

But five years after the program was established, more than half of the state's voucher recipients have never attended Indiana public schools, meaning that taxpayers are now covering private and religious school tuition for children whose parents had previously footed that bill. Many vouchers also are going to wealthier families, those earning up to $90,000 for a household of four.

The voucher program, one of the nation's largest and fastest-growing, serves more than 32,000 children and provides an early glimpse of what education policy could look like in Donald Trump's presidency.

Trump has signaled that he intends to pour billions of federal dollars into efforts to expand vouchers and charter schools nationwide. Betsy DeVos, his nominee for education secretary, played an important role in lobbying for the establishment of Indiana's voucher program in 2011. And Vice President-elect Mike Pence led the charge as the state's governor to loosen eligibility requirements and greatly expand the program's reach.

The notion of sending taxpayer funds to private and parochial schools is one of the most polarizing ideas in education.

To proponents, the rapid expansion of Indiana's program is a model for giving more families the chance to seek better educational options.

But Indiana's voucher program is seen by many public school advocates as a cautionary tale.

Most recipients are not leaving the state's worst schools: Just 3 percent of new recipients of vouchers in 2015 qualified for them because they lived in the boundaries of F-rated public schools. And while overall private school enrollment grew by 12,000 students over the past five years, the number of voucher recipients grew by 29,000, according to state data, meaning that taxpayer money is potentially helping thousands of families pay for a choice they were already making. Most recipients qualify for free or reduced-price lunches, according to state data, but a growing proportion - now 31 percent - do not.

"The political strategy that voucher supporters have used is to start off small and targeted - low-income families and special-education students - then gradually expand it to more groups," said Douglas Harris, a Tulane University professor of economics who favors choice but has been critical of DeVos's free-market approach. "That's also something the Trump-DeVos team will likely try. The term 'Trojan horse' comes to mind."

Indiana's program offers vouchers to low-income families, giving them an amount equal to 90 percent of the state funds that otherwise would have gone to their assigned public school to educate their children. That figure ranges from $4,700 to $6,500 per child, depending on the school district. Children from more-affluent families get half that amount in vouchers.

Indiana's program has succeeded in reaching children who otherwise would not have the chance to attend private schools.

Stephanie Schaefer of Newburgh, Indiana, is a stay-at-home mother of six children, four of whom have used vouchers. For her 13-year-old daughter, Eliana, the opportunity to attend a private school was transformative: After struggling with learning disabilities and falling behind at her highly regarded public school, Eliana was able to catch up, thanks to more-personalized attention at Evansville Christian School. Her progress was a relief for her and her parents.

Schaefer said she and her husband, an engineer, own their home and consider themselves middle class. "We have a comfortable living, but we struggle when it comes to extra," she said, and they never could have afforded private school without help from the voucher program.

Indiana's legislature first approved a limited voucher program in 2011, capping it at 7,500 students in the first year and restricting it to children who had attended public schools for at least a year. "Public schools will get first shot at every child," then-Gov. Mitch Daniels, R, said at the time. "If the public school delivers and succeeds, no one will seek to exercise this choice."

DeVos, who had lobbied for the program as chairwoman of the American Federation for Children, hailed its passage and proposed that other states follow Indiana's lead. Two years later, Pence entered the governor's office with a pledge to extend vouchers to more children.

"There's nothing that ails our schools that can't be fixed by giving parents more choices and teachers more freedom to teach," Pence said during his inaugural address in 2013.

Within months, Indiana lawmakers eliminated the requirement that children attend public school before receiving vouchers and lifted the cap on the number of recipients. The income cutoff was raised, and more middle-class families became eligible.

When those changes took effect, an estimated 60 percent of all Indiana children were eligible for vouchers, and the number of recipients jumped from 9,000 to more than 19,000 in one year. The proportion of children who had never previously attended Indiana public schools also rose quickly: By 2016, more than half of voucher recipients - 52 percent - had never been in the state's public school system.

"Governor Pence supports the rights of parents to exercise choice and select the best school for their children," Kara Brooks, Pence's press secretary, said in a statement to The Washington Post.

The state education department says taxpayers are taking on $53 million in tuition costs that they were not bearing before, although it is unclear how many of those students would otherwise attend public schools - with state funding - if there were no vouchers. Voucher proponents dismiss the estimate as inflated by a Democratic state education chief.

Mychal Thom, head of Concordia Lutheran High School in Fort Wayne, estimated that at least half of his school's 366 voucher recipients last year would have enrolled at Concordia even if the voucher program did not exist. "It's just reduced some of the financial burden on families to attend," he said.

Janelle Ruba, principal of Adventist Christian Elementary in Bloomington, Indiana, said the same of her small school: "Most of the students were already in our school, so the vouchers have just helped with their payment."

According to state data, more than 300 Indiana private schools accepted vouchers last year. Voucher recipients composed more than 75 percent of students at 44 of those schools, most of them Catholic, Lutheran or Christian.

Opponents argue that vouchers are not reaching the children most in need of better schools. They also assert that voucher programs violate the constitutional separation of church and state by funneling public dollars into religious schools, including those that teach creationism instead of the theory of evolution. Indiana's program survived a legal challenge in 2013, when a judge ruled that the primary beneficiaries of the vouchers were families, not religious institutions.

Indiana has no financial reporting requirements for private schools that receive public funds, leaving taxpayers with less oversight and accountability than with the state's public schools. And although the state's voucher program has more stringent academic expectations than many others - private schools must give the same state tests as public schools, are graded on the same A-to-F scale and can be prohibited from accepting new voucher students if they perform poorly - there are loopholes. 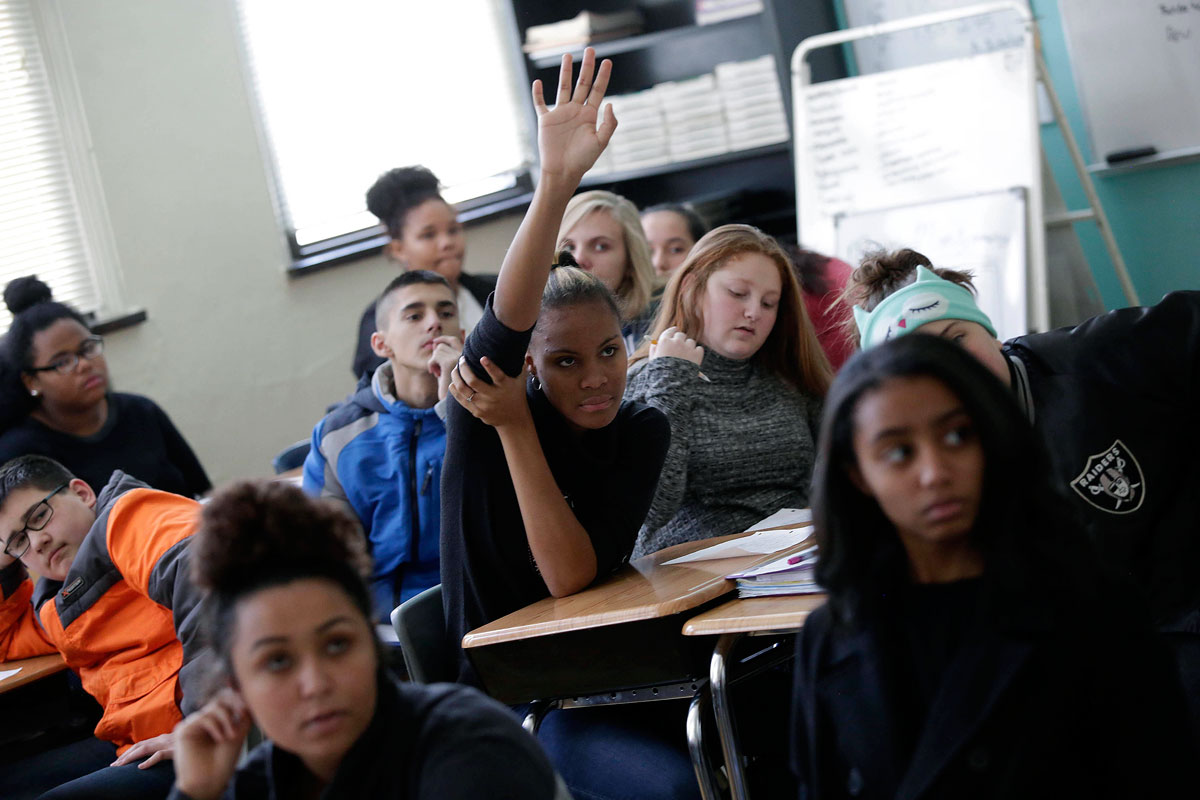 JOSHUA LOTT / For the Washington Post
Eighth-grade students listen to their teacher, Loretta Montgomery, during their math and science class at Horizon Christian Academy in Fort Wayne.

Horizon Christian Academy, for example, had three campuses at which 85 percent of students received vouchers in 2015-2016, bringing in a total of $2.8 million in state funds. Horizon has not fared well on the state's grading system, and one of its campuses received two F's in a row, a performance so poor that the school should have faced consequences this year, according to state law.

Horizon consolidated its three schools into one, which was then allowed to continue accepting new voucher students this fall - though Tammy Henline, a Horizon co-founder and its superintendent, said the consolidation had nothing to do with avoiding accountability: "Having everyone in the same building makes things a little simpler."

Robert Enlow, president and chief executive of EdChoice, an Indianapolis-based organization that advocates for vouchers nationwide, said he wondered why voucher opponents are not as skeptical of persistently terrible public schools as they are of private schools. "We have schools that have been dropout factories in this state forever," he said.

Even as vouchers have shored up many parochial schools, public schools have been squeezed: State education spending has not kept up with inflation, and still is not as high, in real dollars, as it was in 2011, according to Lawrence DeBoer, an economist at Purdue University.

But it is not clear how the vouchers have affected public school finances. Indiana state tax money follows children to whatever schools they attend, so public schools that lose students also lose revenue. But spending on vouchers has not affected the rate of growth in overall state aid to local districts, DeBoer said, noting that the $132 million price tag for vouchers in 2016 was a tiny fraction of the $6.9 billion that local districts received from the state.

It is also not clear that vouchers are an effective way to boost student achievement. Some research has found that after using vouchers to transfer from public to private schools, Indianapolis students experienced no change in language arts performance and saw a decline in their math performance. Studies of other statewide voucher programs have made similar findings.

Glenda Ritz, the state's superintendent of public instruction, said that Indiana has spent nearly $375 million to date on a voucher program that has yet to be evaluated. "Before replicating this program on a national level, Hoosier taxpayers deserve a full accounting of the impact this program is having on student academic achievement and diversity as well as the fiscal impact on public school funding," she said.

Other studies have found that voucher programs boost college enrollment and completion rates, especially among minority and low-income students.

To some Hoosiers, worries about school funding and student achievement are secondary to questions about the effect that vouchers might have on public education's role as a civic institution. Private schools set their own admissions standards and can reject students for any reason, leading to concerns about segregation not just by race and class, but also by faith, ability and disability.

"If we're going to expand vouchers further, folks have to grapple with: Are we going to distribute public funds to private entities that can practice discriminatory or exclusionary practices?" said David Smith, superintendent of public schools in Evansville, Indiana.

This article was produced in partnership with the Investigative Reporting Workshop at American University, where McLaren is a student.