The Ben Franklin of our times has died.

Born Jan. 17, 1942, in Dearborn, Mich., Mr. Archbold spent more than four decades portraying the man with whom he shared a birthday. Even other Franklin impersonators recognized him as the original.

He began portraying Franklin in 1973 in Michigan and quickly rose to prominence for the depth of his knowledge, his welcoming personality, and his ability to stay in character while interacting with the public.

"He had a twinkle in his eye that I'll never forget," said Amy Needle, president and CEO of Historic Philadelphia Inc., who worked with Mr. Archbold for more than three decades. "He charmed millions of visitors over his time as Ben Franklin. Philadelphia was and is better because he represented our city for a long period of time."

Mr. Archbold so embodied Franklin that Needle would call him Ben — "I couldn't refer to him as Ralph" — and recalled how Mr. Archbold would pick up his phone: "Hello, this is Ben Franklin."

"He was ahead of his time, he didn't break character," Needle said, remembering Mr. Archbold's explaining that visitors wanted a full experience. "If a visitor was in town from Kansas and met Ben Franklin, they didn't want to then see Ben Franklin drive away in his car."

Familiar across the city and region, Mr. Archbold also traveled as Franklin and made television appearances. A metal sculpture of Franklin on the Vine Street Expressway used Mr. Archbold as a model.

Before the Sept. 11 terrorist attacks, Mr. Archbold would sometimes dress as Franklin while flying. At first, it was because he sometimes had little time between arrival and an event. Later, it was simply who he was.

In late 2006, a woman named Linda Wilde hired Mr. Archbold, as Franklin, to deliver a toast at a friend's wedding. They struck up a conversation afterward, and Mr. Archbold asked her to join him in his work.

"I could use a Betsy Ross," he told her.

Working events together, they struck up a friendship. Lunches and post-event dinners turned into dates and, soon, someone in City Hall found out about their fledgling romance.

"We had not talked marriage. We had gone on a few dates, but we hadn't talked marriage at all," she said. And then, two years after they met, Mr. Archbold dropped the news: "He actually called me on April Fool's Day and said, 'The City of Philadelphia wants to marry us,' and I thought it was an April Fool's joke."

It wasn't. Ben Franklin and Betsy Ross were married July 3, 2008, in a ceremony in front of Independence Hall presided over by then-Mayor Michael A. Nutter. Linda Wilde became Linda Archbold. 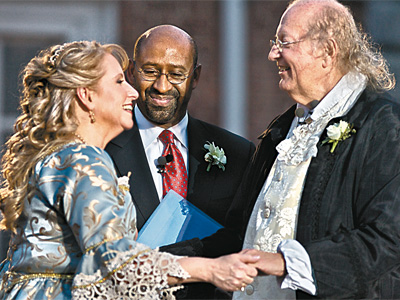 "Mr. Archbold was the consummate gentleman, and I always enjoyed watching him and his portrayal of Ben Franklin. He really WAS Ben Franklin whenever he was out in the public, and was beloved by the crowds who would instantly recognize him," Nutter said in a statement, calling the wedding a highlight.

"As this is Philadelphia, Ralph and Ben's memories will live on," he said. "But there was really only one Ralph, and I'm so glad I had a chance to get to know him and appreciate his work."

The only problem, Linda Archbold said, was that the real Ben Franklin and Betsy Ross never had a romance. That unnerved her husband, she said, who would be forced to break character — which he hated.

After marrying, the Archbolds decided to move to the suburbs. Mr. Archbold, she said, enjoyed being anonymous. Out of character, he was more of an introvert.

"He was not a man to spend a long time in phone conversation," she said. "As Franklin, fine. But as Ralph, not so much."

Mr. Archbold loved to travel, going around the country from historic site to national monument. In their last trip together, Linda Archbold said, the two drove to California and stopped at every national park along the way.

A voracious reader, Mr. Archbold left behind five unfinished books. His favorites included works by Dan Brown, Walter Isaacson, Glenn Beck, and Tom Clancy. He had begun to listen to audio books on his tablet.

In 2012, the Archbolds went to the Sundance Film Festival, one of the items on Mr. Archbold's bucket list, his wife said.

He loved PBS — especially Ken Burns films — and movies. Having made several appearances as Franklin, Mr. Archbold was in the Screen Actors Guild and reveled in watching the movie screeners sent for awards season.

Fences was his favorite from the most recent crop, Linda Archbold said, and he also loved classics such as Forrest Gump, Gone With the Wind, and Casablanca.

In 2009, Mr. Archbold suffered a stroke from which he recovered.

In 2015, columnist Helen Ubiñas spoke with Mr. Archbold about the various Franklin impersonators in the city. Mr. Archbold said he welcomed the competition.

To the newcomers, he offered his wisdom: "Carefully research Ben's work, be professional, and do honor to Dr. Franklin's memory."

In addition to his wife, he is survived by children Kenneth, Michael, and Claire, children with his former wife Susan Sanders; daughter Elizabeth Nelson, child of another marriage; a stepdaughter, Lauren Scudieri; and a grandson.

Contributions may be made to the Benjamin Franklin Museum in care of Independence National Historical Park, 143 S. Third St., Philadelphia 19106.