Frank's Place: Now this was a Philly sports bar

When the sirloins were thick and rare, the whiskey cheap and plentiful, the wise guys brash and colorful, Lew Tendler's Restaurant was, as the Pabst Blue Ribbon sign over its bar proclaimed, "The Quaker City's Sporting Hub."

"Sports bar" is now a tired marketing concept, one connoting a place where young males gather to ogle big-screen TVs, memorabilia, and waitresses dressed as scantily as the house salad.

Tendler's was so much more.

"It was the kind of place you can't find in Philadelphia any more," Gabe Oppenheim wrote in a 2015 Pennsylvania Gazette piece, "a pub where mobsters, athletes and writers gathered."

Between its 1933 opening - 71 days before Prohibition's repeal - and its closing 37 years later, the ornate establishment at Broad and Locust was home base for Philly's leading sports figures as well as the Runyonesque barflies who buzzed around them.

In fact, Damon Runyon himself, the newspaperman who immortalized New York's touts and hustlers, drank at Tendler's whenever he was in town. Most of Philadelphia's sportswriters, including Red Smith when he worked at the Record, haunted the place, as did visiting scribes such as Jimmy Cannon and Dan Parker. On any given day, you might find journalists; baseball and basketball players; boxers; jockeys; NFL owners; mobsters; and an assortment of quirky gamblers with names like Mugsy, Cappy, Frisco Legs, Oysters, Blinky, and Sassy Doc.

"[It was] the Grand Central Station for Jewish Philadelphia, the downtown theater crowd, sports and boxing buffs, has-beens, bookies, sportswriters," Harry Boonin wrote in his 2016 book on four Jewish Philadelphia boxers, Never Tell a Boy Not to Fight.

It was owned and operated by one of those fighters, Lew Tendler, a Hall of Fame southpaw from South Philly, and his family. Seven months after he opened it, the place was so popular the seating capacity had to be doubled.

Its walls were adorned with photos of famous patrons. The wood-paneled, chandeliered dining area contained booths and a long communal table. Each table held a pewter bowl of pickles. And in this Depression-era chophouse, you could order a $1 steak or a seven-course shad dinner for 75 cents.

The real action was at the bar - the Sporting Room - just inside the front entrance. Always buzzing with fight and race talk, the bar in its later years also housed a public ticket booth operated by boxing promoter Herman Taylor.

The coin of Tendler's realm was sports gossip, some of it spilled from the loose lips of inebriated athletes. Writers eagerly filled their notebooks while the Jewish and Italian gamblers who occupied booths or the corner outside employed it to their benefit.

One night, according to Boonin, bookies had to adjust their odds on a Browns-A's game after watching St. Louis catcher Rollie Hemsley drink himself into a stupor.

"Lew Tendler's Restaurant is a hangout of all the gamblers, and their payoff joint," read a 1944 organized-crime report presented to baseball commissioner Judge Kenesaw Mountain Landis. It ranked the restaurant as Philly's gambling epicenter, well ahead of Garden State Park.

Perhaps Tendler's most colorful habitue was a Northeast Philadelphia resident, Alfred "Sassy Doc" Manuszak, who had been arrested 38 times for gambling and once, after killing rival Whitey Krieger in a duel, for murder.

Among the more upstanding regulars was Bert Bell, the Main Line patrician who owned the Eagles and later became NFL commissioner. Bell's offices were located on nearby Walnut Street, and he lunched and conducted business at the restaurant often, sometimes with league owners like Art Rooney or Tim Mara.

Basketball's George Mikan and his Minneapolis Lakers stopped in when in Philadelphia. Cleveland Indians manager Al Rosen, a friend of Tendler's son, once brought his entire team there. Inquirer columnist Sandy Padwe interviewed Joe Paterno at Tendler's in 1969, beneath a photo of Knute Rockne "[It's] one of the few places in town where a diner gets a rogue gallery with the chicken soup," Padwe noted. 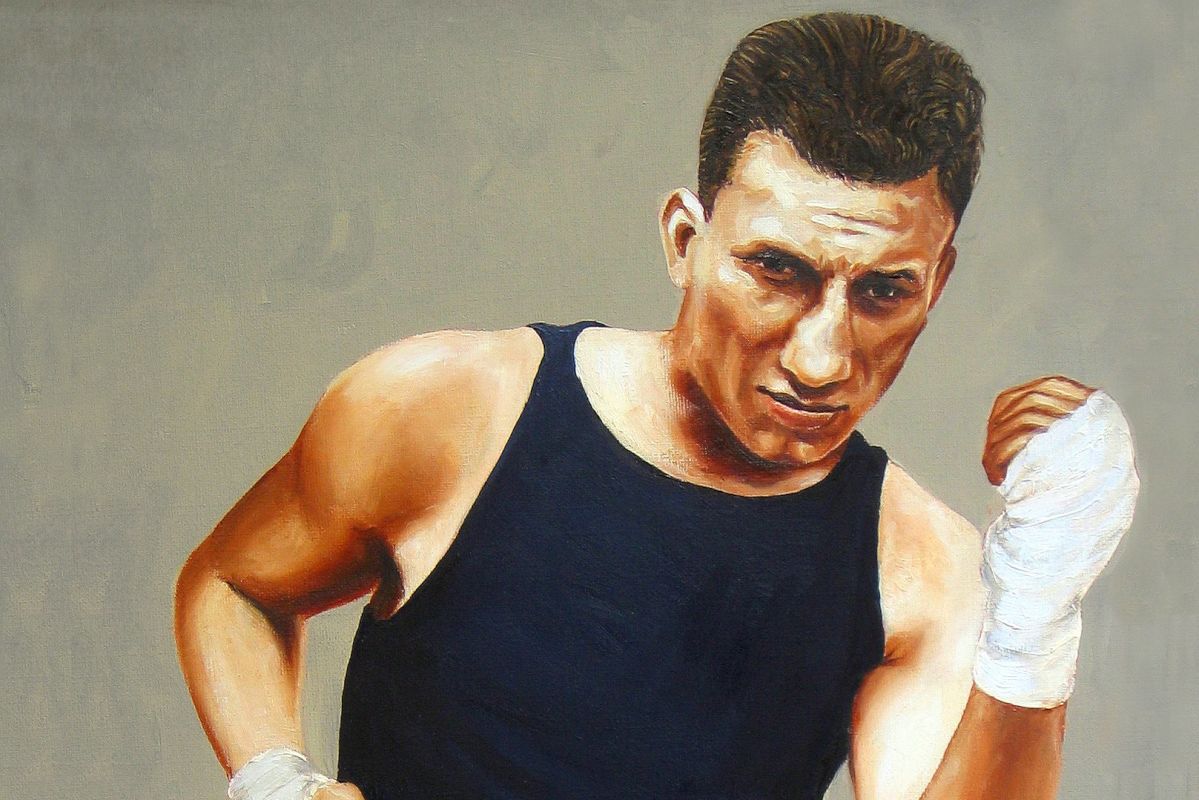 charles miller
Hall of Famer Lew Tendler, seen here in an oil painting by Charles Miller, is considered one of the finest left-handed fighters in modern boxing.

Philadelphia boxer Lew Tendler is considered one of the finest left-handed fighters in modern boxing and was elected to the Boxing Hall of Fame in 1961
Oil on Linen painting by Charles Miller, 14x18 inches.

But the real action was boxing. In the late 1940s, two large TVs were installed and the bar was packed on fight nights. When, in September 1952, Rocky Marciano challenged heavyweight champ Joe Wolcott at Municipal Stadium, hundreds of sportswriters and bookies made Tendler's their pre-fight headquarters.

And, according to a Marciano biography, one of the Brockton Bomber's uncles, Pete Piccento, was able to place $40,000 in bets that week at Tendler's.

Organized crime ran boxing then. According to Oppenheim, mobster Blinky Palermo once asked Sugar Ray Robinson - at Tendler's - to throw a fight. Though Robinson had no choice but to agree, he instead knocked out his opponent.

"It was an accident," Robinson later told Palermo at the bar. "I just happened to catch him with a hook."

That was 1960. Ten years later, confronted by changing Center City, dining, and sports landscapes, the place closed. Its owner died of an aneurysm that same year.

Last year, when the building that housed it was being razed, a long-obscured advertisement for Tendler's became visible on an exposed wall.

I went to Broad and Locust a day later to see what remained of a place I'd long heard about but never visited. Amid the demolition work, you could almost smell the cigar smoke again, see the fedora-clad crowd, hear the whiskey-fueled sports chatter.

Then, as all ghosts must, Lew Tendler's receded into the urban dust.

We Recommend
Grading the Eagles' fourth-quarter comeback win over the Giants
Paul Domowitch
Eagles defense stepped up, bought Carson Wentz time against the Giants
EJ Smith
Eagles-Giants Up-Down Drill: Boston Scott to the rescue
Jeff McLane
Doug Pederson on Carson Wentz: ‘He’s taking the step in the right direction to be one of the top quarterbacks in the league’
Marc Narducci
Doug Pederson saves himself from having to live down Hakeem Butler moment in Eagles win | Jeff McLane
Jeff McLane
Say this about the Eagles: They don’t give up | Mike Sielski
Mike Sielski
On the Fly Newsletter