The outside of Maggie Lucas' left arm offers a message, added last year at a South Street tattoo joint. For when I am weak, then I am strong.

Lucas already knew the biblical turn of phrase. It earned extra points and a spot on her arm after surgery for a torn right anterior cruciate ligament.

Locating weakness in this particular basketball player would be a chore. The words, however, speak to Lucas again, preparing now for her second ACL surgery in 14 months, same right knee.

You don't dream about this growing up. All the hours that got you to the WNBA — the pre-dawn shooting in an empty gym before classes at Germantown Academy, the ballhandling drills that turned your Narberth basement into a personal Palestra — you can't envision they also lead here, just off the lobby of the Curtis Building, Seventh and Walnut, your sweat no longer about a dream but the reality of being an injured professional.

"My work has always been: I'm going to run through a wall to get what I want," Lucas said as she warmed up for a 90-minute physical therapy session Tuesday by riding 20 minutes on a stationary bicycle. Now, the 25-year-old must take time to examine the wall. Her work still would exhaust most species. She'd already been to a gym in Havertown, did some cardio work, some upper-body strength work. Her day includes touch shooting on her driveway, ballhandling work in her basement. She believes that was important after her first surgery.

"I never felt like I lost my form, lost my touch,'' Lucas said. "I kept the ball in my hands. I never lost that."

Lucas and her recovery  team believe the former two-time Big Ten player of the year at Penn State had been savvy in not rushing back to the Indiana Fever, completing each stage of recovery.

"Going up for a layup, I just kind of landed funny," Lucas said of her second ACL tear on April 6, 10 months post-surgery.

A month later, she was waived by the Fever.

"The Fever stood by me last year," Lucas said. "They could have cut me after my first injury. They stood by me, which I wasn't expecting. I understood this year: They have to let me go, from the business side of things."

Because of all her local success — she's on any short list of great ones from around here —  it's easy to disregard the narrowness of the path Lucas took to the WNBA.

"Every level you go up, the pool just gets more and more competitive — it's like a funnel," Lucas said. "I think sometimes people are a little unrealistic about how hard it is to make a WNBA team. There's 144 spots and the whole world is going for them."

Lucas knew going in that being drafted in the second round by Phoenix in 2014 guaranteed nothing. (None of the six players drafted directly ahead of her are in the WNBA). Farther into the funnel, 5-foot-10 shooting guards — there's plenty of them.

"You go in with these expectations — I do my best and show what I'm capable of, I'll be fine,'' Lucas said. "When I got to Phoenix, there weren't many of their big-name players in camp. You look around, you start doing number games — there's 14 of us probably playing for two spots."

That was before an established Eastern European shooting guard showed up on the last day of camp before a preseason tournament, a new roster addition.

"I had two options at that point," Lucas remembers. "Say, 'Oh, well, there's no spot.' Or focus on getting myself to the preseason tournament and playing really well and hopefully getting seen by somebody else, since there's probably no spot here." 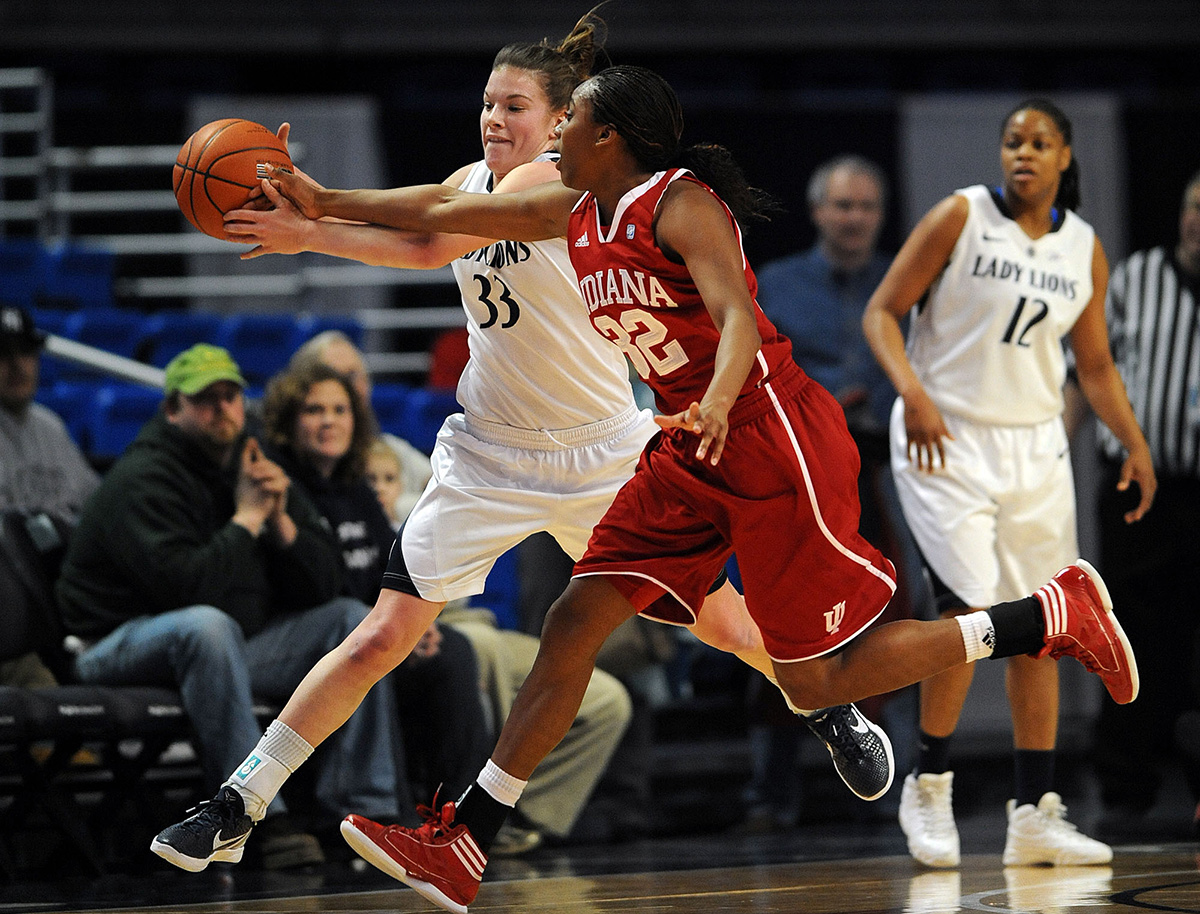 That's how it played, last day of preseason. Indiana gave Phoenix a second-round choice for Lucas. This time she was the one who showed up the last day grabbing a spot.

"Phoenix did right by me," Lucas said.

Her rookie season was about toughening up. There were some games where she felt like her Penn State self, in the flow, but she was a reserve fighting for minutes. Since the WNBA season is in the summer, Lucas joined the migration of women's pros who go to Europe to play in the winter. She was in France, enjoyed it, but it was a grind, going from college to WNBA to European season back to WNBA, barely a break. She skipped Europe the next year, stayed home to work on her game, helped as an assistant at Germantown Academy.

Fate would have it, the rest preceded her first significant injury last May. She had earned more minutes, averaging 7.8 points through Indiana's first four games, had led the Fever with 12 points that day before going down in the final seconds of the third quarter.

"I never envisioned the injury side of it," Lucas said. "When you're going along — you haven't had any injuries — you start to feel pretty invincible." 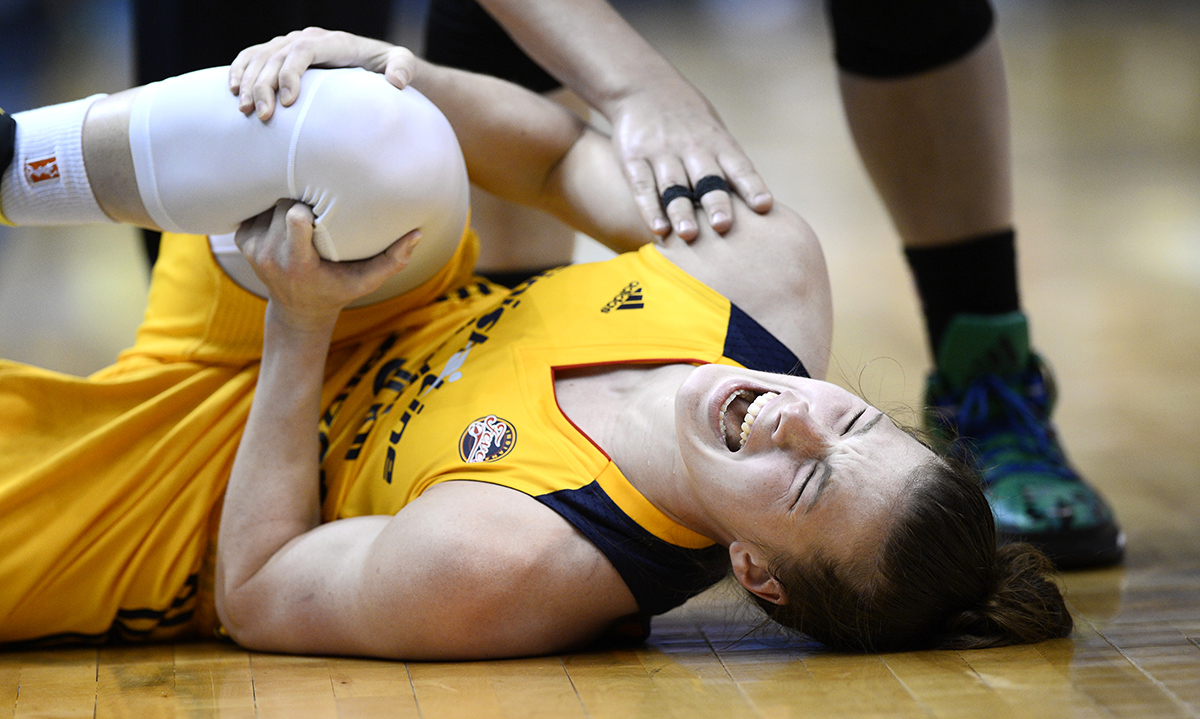 On Tuesday, Lucas was catching a lightly weighted ball, whipping it around her back and over to her physical therapist, a timeless game of catch. Except she was positioning her legs on a circular board, an upside-down Bosu ball that could send her to the ground at the slightest imbalance. Other drills: Cutting off blood supply out of your injured leg, allowing you to do resistance work with less weight on your leg. Semi squats. Heel slides. Step-ups. She got the music choice and went with reggae, Stick Figure singing about the school for you and me.

In his acceptance speech, Big Five Hall of Fame inductee Ibby Jaaber from Penn offered a poem, "Do or die."

"This is only a quarter to third of her daily work," said Justin Shaginaw, lead therapist and coordinator of sports medicine at 3B Orthopaedics, who also works with the U.S. men's national soccer team among other elite athletic clients.

Dealing with torn ACLs is all too common, especially among elite female athletes.

"I remember one time I looked at my Indiana Fever and like eight of the 12 girls on the roster had torn their ACLs, some twice," Lucas said. "Our game just gets more and more athletic, and faster and stronger, but the injuries are still going to happen. Luckily, bouncing back is possible."

She had bone graft surgery on May 9, and has to wait three months before they can go back in and repair and reconstruct the ACL.

Getting Lucas to slow down a bit is part of his job, Shaginaw said. Not easy for top athletes, he knows. Research done by academics from the University of Delaware and in Oslo, Norway, found that re-injury rates after ACL reconstruction went down 51 percent each month up to nine months. Shaginaw, familiar with the research, said your rate can drop to as low as 6 percent by waiting at least the nine months. 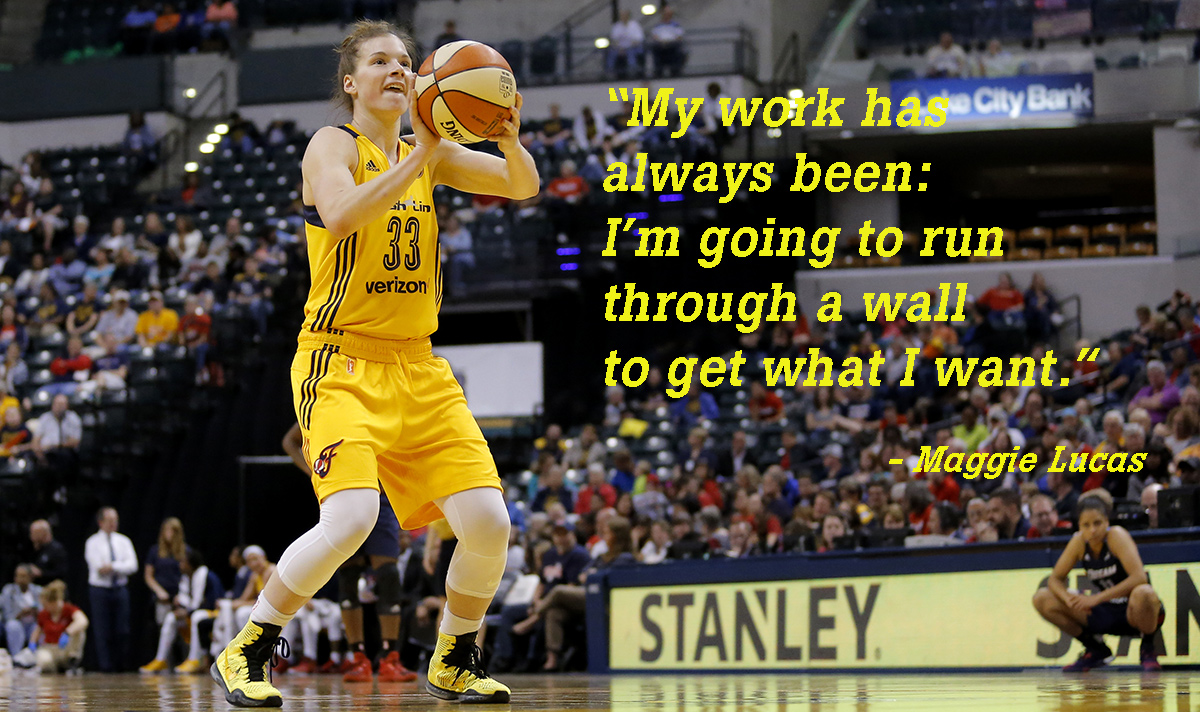 That doesn't prevent Lucas from a re-injury, obviously. The flukiness of it only added to the frustration.

"We're still missing something,'' Shaginaw said, although he remembers how Lucas did the right things last year, and by taking her recovery in stages she could practically broad jump across his room by the end of it.

"They were amazed at how you looked," Shaginaw said of Lucas returning to Indiana earlier this year. "What was that, 8 ½ months?"

She still hadn't been cleared for full-time, full-court play when the second injury occurred.

"I was putting everything I had on that knee," Lucas said of the tests she had undergone. "And like one weird step and it went. You can test it, and pass every test, and I think it was just some bad luck."

But she has been receptive to asking questions, even if there are no obvious answers.

"I'm going to tell you she did it right. But what do we need to address and change?" asked her strength and conditioning coach, Jim Ferris, who worked with Kyle Korver and other NBA pros for years. "You're not unbreakable. They're not easy conversations."

Especially hard when you see the results.

"She can squat 250 and has shredded abs," Ferris said.

Lucas, Ferris and Shaginaw talk about whether the routine that got to the WNBA still is the exact right recipe.

"You shoot 98 percent in your practice?" Ferris said. "What's it do? What's a thousand shots a day for you?"

Not just for Lucas. In general.

"It's a big thing in all pro sports," Shaginaw said. "There's as much value in rest as there is in training. Some NBA teams have stopped the morning shootarounds. I think it was the Cubs who stopped getting to the ballpark so early." 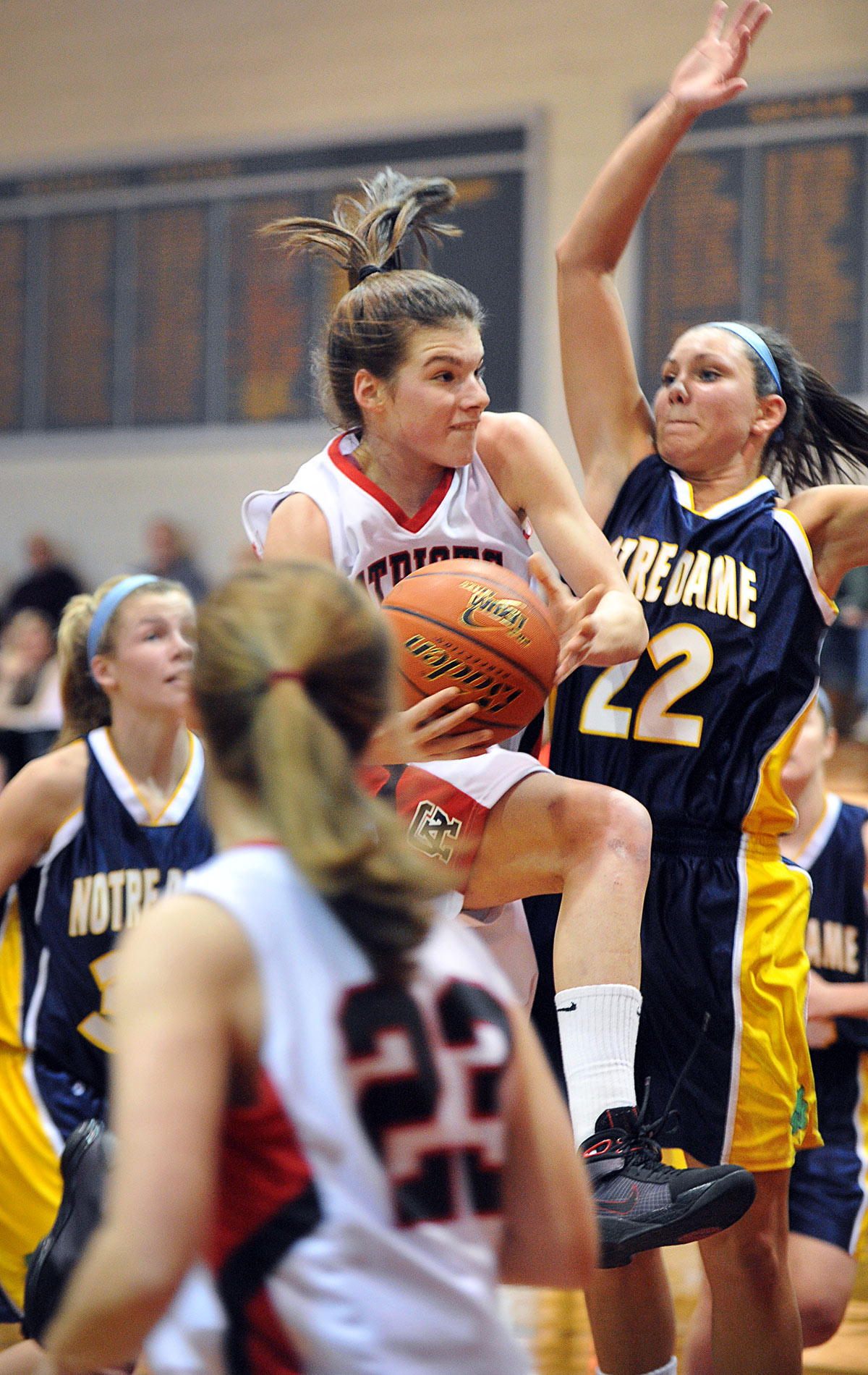 Lucas hears all that. She's not fighting it. Getting through a wall isn't the only way past it.

"If we can't be ready on game day, and get ourselves ready, that's our problem," Lucas said of the value, for instance, of shootarounds.

Her own next WNBA stop will be a free-agent tryout. She'd love to get another shot next year in Indiana. In her mind, that's still her team. For now, she stays busy. She was headed Tuesday to a gym for a private training session with a high school player. The session isn't about Lucas, so unless that tattoo or something sparks a question, her own journey may not come up, even when she was in high school herself.

"I was just always such a gym rat," Lucas said. "I had a basketball with me all the time. I would be in the gym probably eight hours a day. That's not even an exaggeration. Free periods, I would go to the gym. I'd get to school early and and shoot at five o'clock in the morning. I'd stay after school, I"d play pickup with the guys. We had a good group. We'd stay every day after school, stay late at night."

Were some of the guys there before school, too?

Tutoring a teenager, would she throw everything at her that she once threw at herself?

"No," Lucas said with a laugh, her own physical therapy session almost over. "Not right away at least."