From potholes to preservation, how has Mayor Kenney lived up to his original campaign promises?

Mayoral candidates always talk about quality-of-life issues. But when Jim Kenney ran for mayor four years ago, he had extra reason to focus on those bread-and-butter neighborhood issues. Philadelphia was in the throes of an unprecedented building boom, and the city was reeling from the stress.

Regaining control of the city’s streets became one of Candidate Kenney’s signature crusades during the 2015 campaign. He railed against contractors who monopolized the sidewalks with their building equipment, forcing pedestrians to wade into oncoming traffic. He pledged to reverse years of underfunding at the Streets Department and tackle the city’s Kabul-size collection of potholes. And once those streets were properly paved, he promised to install 30 miles of protected bike lanes and implement Vision Zero protocols to make the streets safer for everyone.

His concerns went beyond basic safety. He also reprimanded developers who were destroying Philadelphia’s precious historic fabric. And he vowed to crack down on midnight dumpers who were defiling neighborhoods like Germantown and Kensington with heaps of construction debris.

So how well has Mayor Kenney lived up to the promises made by Candidate Kenney?

I checked in with community leaders in a variety of Philadelphia neighborhoods and combed through city statistics to assess Kenney’s accomplishments and failings on five issues that are all the outgrowth of the construction boom: providing safe passage at construction sites, street paving, protected bike lanes, historic preservation, and illegal dumping. These aren’t the big, intractable, structural challenges we hear so much about, like poverty, crime, and schools.

But they are issues that color our daily experience of city life and impact the viability of struggling middle neighborhoods. And unlike some other problems the city faces, they are actually solvable with enough money and commitment. While no mayor can be expected to eradicate poverty in just four years, an effective manager should be able to fix potholes and keep the city clean.

Nothing made Kenney more animated as a councilman than seeing the sidewalks blocked by construction projects. In 2008, he even sponsored City Council legislation that would have required dedicated pedestrian walkways — cattle chutes — at every building site. Although the final bill was watered down before it was passed, Kenney continued to push for better enforcement.

As mayor, Kenney scored a big victory when the Gallery ringed its three-block-long building with pedestrian walkways during its long renovation. The city now requires contractors to apply — and pay a fee — for sidewalk closures. It routinely fines those who fail to comply, although the amount is a mere $75 a day. Thanks to help from the Bicycle Coalition’s work, the city now has an online system for reporting blocked sidewalks.

But neighborhood activists say sidewalk closures remain a big safety issue. Fishtown has endured months of blocked sidewalks on Frankford Avenue, including a period when dueling apartment projects closed sidewalks on both sides of the street. Venise Whitaker, a community activist who started a Facebook group called the Riverwards L&I Coalition, complains the $75 fines are meaningless. As soon as L&I inspectors leave, she says, contractors block the sidewalks again.

“On this issue, Councilman Kenney would be appalled with Mayor Kenney,” says Andrew Stober, a former Streets Department official who now works for the University City District. “The real cure,” argues Bicycle Coalition director Sarah Clark Stuart, “is getting more inspectors in the right-of-way unit.”

Because the city drastically cut back on street paving during the Street and Nutter administrations, Kenney inherited a huge maintenance backlog — nearly a thousand miles, according to a Bicycle Coalition estimate. The deferred maintenance occurred at a time when construction and utility work was wreaking fresh havoc on Philadelphia streets. Kenney has dramatically increased the Streets Department paving budget, enabling it to add two more paving crews. This year the city met its goal of paving 95 miles of streets, up more than 200 percent from the last years of Nutter’s term. Philadelphia still needs to pave 131 miles annually to stay even, but the number of potholes being reported to 311 has fallen by half, according to the Streets Department’s Pat O’Donnell. Kenney is also creating a Vision Zero maintenance crew to refresh bike lanes, crosswalks, and other safety features.

With all that, Philadelphia’s streets still look like they’ve been through a couple of wars. The 2000 block of Spruce has more potholes and patches at this point than actual street surface. The city hasn’t paved Pine or Spruce Streets — two of Center City’s most important crosstown streets — since 2009, and the celebrated bike lanes there have virtually disappeared as a result. Torresdale Avenue, which connects a string of neighborhoods in the Northeast, requires urgent repairs, according to the city’s maintenance ranking system. The Streets Department says this is the year that the worst of Center City’s streets will finally be paved. It’s hard to imagine going through another winter without repairs.

The Streets Department needs to repave 131 miles of the citys 2,500-mile network every year to keep up with normal wear and tear. That goal hasn't been reached since 2002.

** Helped by federal stimulus funds to fight the recession. 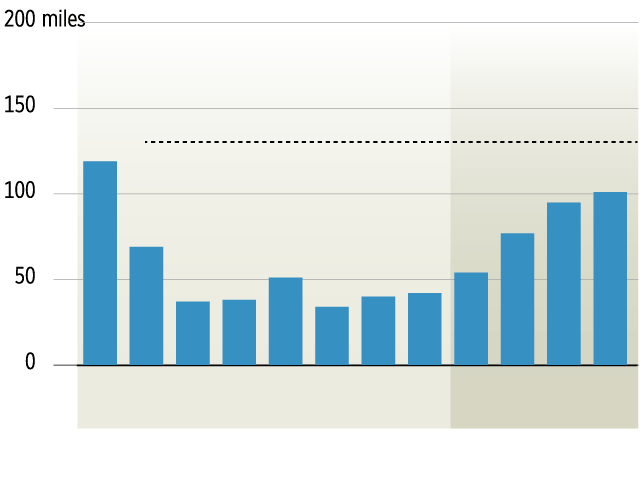 ** Helped by federal stimulus funds to fight the recession. 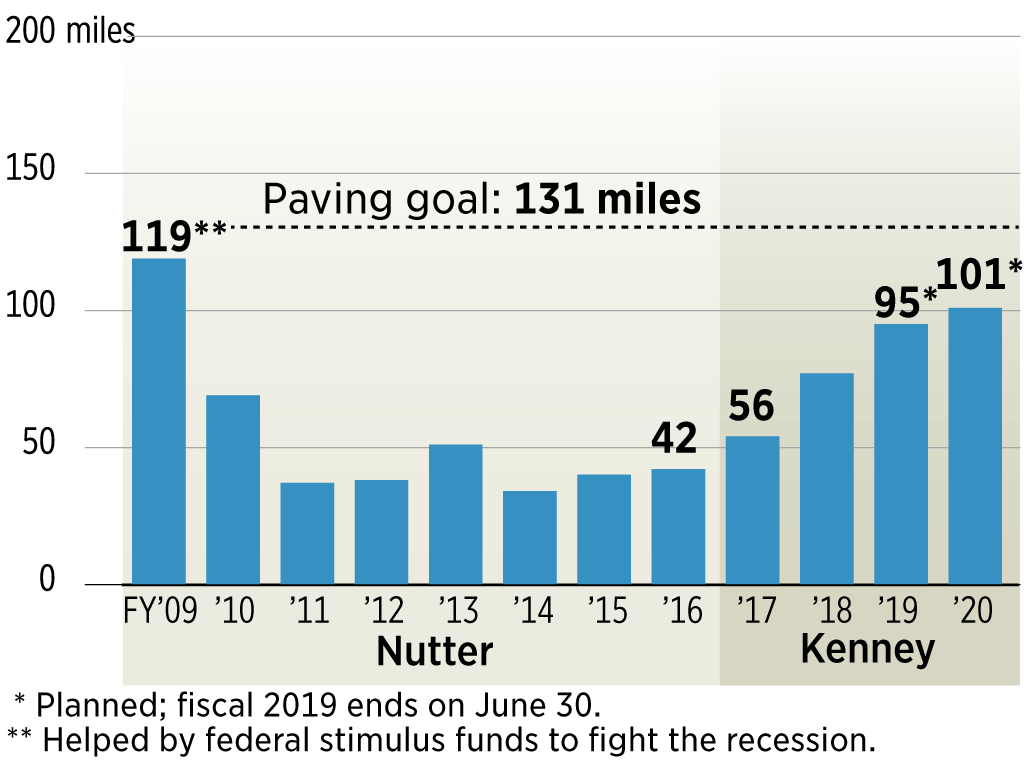 In one of his most explicit promises, Kenny pledged to add 30 miles of protected bike lanes to increase safety, encourage more people to commute by bike, and reduce air pollution. How many miles have actually been completed? Less than five.

Technically, Kenney did not give a completion date for those 30 miles, but bike advocates are disappointed that so little has been accomplished. Kenney recently revised his original pledge and now promises to complete 40 miles of protected lanes by 2026. New protected bike lanes on Chestnut and Market demonstrate how effective they can be.

The Kenney administration blames the lack of progress on recalcitrant members of City Council, who use their prerogative to hold up new bike lanes. Jon Geeting, who works for Philadelphia 3.0, a political advocacy group, argues that blaming Council members is a lame excuse and says the mayor should be doing more arm-twisting. He is also disappointed that Vision Zero plans for reconfiguring Washington Avenue — in the works since 2012 — have been put on hold yet again so another study can be done. Meanwhile, the notoriously unsafe Roosevelt Boulevard had one of its deadliest years ever in 2018, claiming 21 lives.

There has been a lot of ink lately on the trashy state of Philadelphia’s streets, and Kenney’s halfhearted foray into street sweeping. But illegal dumping, usually by small-fry contractors trying to avoid disposal costs, may be taking an even bigger toll on the city’s neighborhoods. Because so much debris ends up in poor neighborhoods like Germantown and Kensington, controlling illegal dumping has become an issue of environmental justice. But they are far from only affected areas. Midnight dumpers recently hit a quiet Chestnut Hill street. Julie Slavet, head of the Tookany-Tacony-Frankford Watershed, says it has been a Sisyphean task to clear Tacony Creek Park. As soon as one load of tires or old mattresses is removed, another appears.

Kenney created a Zero Waste and Litter cabinet to deal with trash issues and is in the process of distributing 100 security cameras to keep an eye on sites that have become magnets for illegal dumping. Fines are being increased, along with prosecutions. Yet, despite the effort, the number of cases brought by the District Attorney’s Office actually fell last year, according to the city’s own progress report (page 16).

Kenney began his tenure with strong rhetoric about protecting the city’s historic fabric, which has been hard hit by the construction boom, and initially seemed ready to pressure Toll Brothers to reconsider its Jewelers Row demolitions. Instead, he punted, forming a task force to study the problem. What was supposed to take 18 months stretched into a leisurely two years. Although the administration has added two new staff positions at the Historical Commission, it could be a year or more before any of the recommendations can be implemented. Meanwhile, demolitions of great old churches and distinctive buildings are reported almost every week.

Despite the drawn-out process, Randy Mason, a Penn professor who served on the task force, believes that real change is now possible. Not only is the city gearing up to produce its first-ever survey of vulnerable properties, he believes the proposed tax incentives will help stem the demolitions. He also thinks the proposal for less-regulated historic districts could be a boon for preservation. But he regrets that the task force wasn’t able to agree on adopting a measure called demolition delay, which would have allowed the Historic Commission to intervene before potentially historic buildings were torn down. “Standing up for short-term demolition delay,” Mason says “would have been a signal that Kenney was not doing everything developers ask.”

This column has been updated to clarify the status of the protected bike lane on 22nd Street. The project will go forward once the street is paved, according to a Kenney Administration spokesperson.