Work on Atlantic City Rail is done, but when trains will run remains unclear

The safety system installation that shut down the Atlantic City Rail Line this fall is complete, but transit officials still aren’t saying when trains will begin running again.

“We don’t have a determined date in regards to the [Atlantic City Rail Line] restoration,” said Nancy Snyder, a spokesperson for NJ Transit. “We are going to restore service on the ACRL as quickly as possible.”

The line, which carried fewer than 2,000 riders a day, stopped service on Sept. 5 so NJ Transit could install equipment for Positive Train Control, an automated system that ensures trains travel at safe speeds, on its 60 miles of track. Congress mandated that the system be active on America’s railroads by the end of the year, a deadline most are expected to miss.

The news has revived questions about why service was suspended. Most of NJ Transit’s lines have continued running through PTC installation. PTC installation, during which vehicles must be pulled out of service, has required NJ Transit to make do with fewer cars throughout the state, creating scheduling chaos on its busiest routes. The Atlantic City line’s riders represent less than 1 percent of the people NJ Transit serves, and the four locomotives and 16 passenger cars used to run the southern route, along with some staff, were transferred to busier lines in the past months to ease scheduling woes.

The need for vehicles in North Jersey plays “a small part” in determining when the Atlantic City line would reopen, Snyder acknowledged. 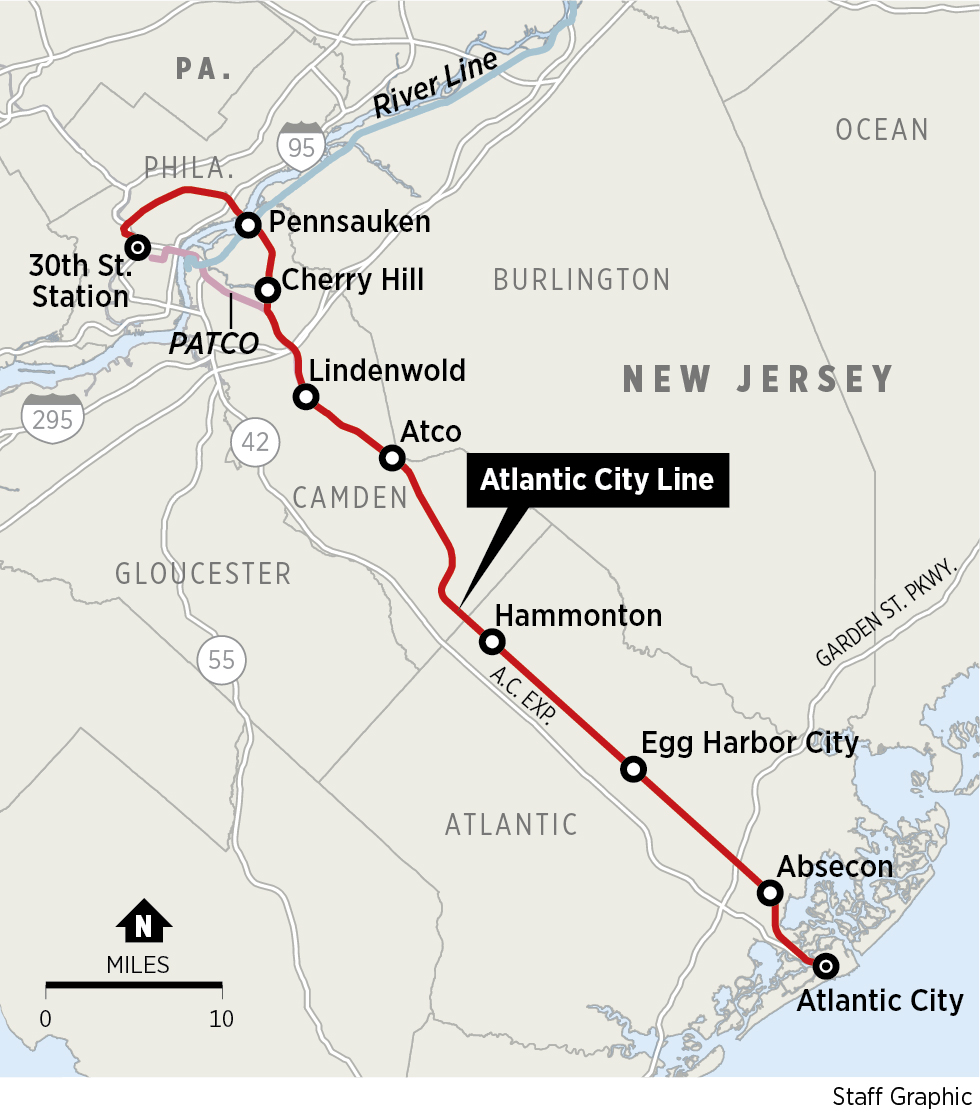 Local riders are frustrated that the service is on hold.

“I understand there are still crew and equipment shortages in North Jersey, but frankly, that doesn’t matter to us,” Nick Pittman, an area weatherman and champion for the line, wrote in an email Wednesday. “We want our train back and we want it now!”

While ridership on the line is small, losing service has been a hardship for those who depended on it. Commuters relied on it to get to jobs in Atlantic City. For others, it provided access to services in Philadelphia. Karen Breen-Davis of Mays Landing, a French professor at Rowan University in Glassboro, must travel to the city with her husband, who is being treated for prostate cancer. Vision problems make it difficult for her to drive at night, she said, and her husband’s choice of treatments has been influenced by the difficulty they face getting to and from appointments.

“We’re really fortunate that the trains may come back,” she said, “but it’s a concern to the point that we would have to consider moving.”

The loss of the railroad also has been a blow to Atlantic City’s economic revival, and a speed bump in other communities' plans to promote the line as an underused resource for commuters. Cherry Hill has plans to improve access to its Atlantic City Rail Line station and pitch it as an easy way to get to 30th Street Station, which is surrounded by development and job growth. State legislators said that they had been in communication with NJ Transit and that the agency was aware of the potential the line could have for the region.

“I’m very encouraged that they understand how important the railroad is to us here in South Jersey,” said Assemblywoman Patricia Egan Jones (D., Camden).

NJ Transit said it could not calculate precisely how many of the Atlantic City line’s locomotives and cars have PTC installed. When measuring the progress of PTC installation on vehicles, it doesn’t distinguish among lines, Snyder said. NJ Transit has 1,300 pieces of equipment, including 220 locomotives. Just 440 of those cars and locomotives are required to be equipped with PTC.

For years, rail officials have known installing PTC was not just required, but an important bulwark against deadly accidents. The 2015 derailment of an Amtrak train in Philadelphia that killed eight people would have been prevented if PTC had been in place. Congress' PTC mandate dates back a decade. NJ Transit was disastrously behind on installing the system — as of September, it had installed just 66 percent of the hardware. But as of the end of November, the FRA reported that NJ Transit was 95 percent finished with PTC hardware installation.

Even so, NJ Transit does not expect to be fully compliant with the PTC deadline by the end of the year. The FRA has granted the agency permission to have 282 of its vehicles installed with PTC by the end of the year, while the rest must be equipped by 2020. The FRA has also approved a more-limited testing standard for NJ Transit this year. If it can meet those marks, NJ Transit can avoid up to $27,904 a day in federal fines that the FRA could levy for operating without PTC.