How to ditch cable for streaming and still watch the Phillies, Sixers, and Flyers

Since we all aren’t paid $330 million like Bryce Harper, some consumers have cut the cord because they can’t afford ever-increasing cable bills.

In recent years, online streaming services from companies such as DirecTV and Hulu have signed up millions of subscribers by offering popular channels — from FOX and CBS to CNN and ESPN — typically at lower monthly costs.

And after years of Comcast dominating local sports coverage, some of these streaming services will let you watch Harper and the Phillies this season. Four of the major live TV streaming services carry NBC Sports Philadelphia, the regional sports network that broadcasts most Phillies, Flyers, and 76ers games.

Consumers tempted to cut the cord should closely review the “skinny bundles” to ensure that the channels they need are included. If so, customers can save hundreds of dollars a year by cutting cable — and still watch Philly sports.

“Cable gives you a lot for the money,” said James Willcox, who follows the pay-TV industry for Consumer Reports. “The main complaint is you pay for a lot of channels you don’t watch.”

Where to stream Philly sports

Perhaps the biggest barrier to cutting the cord in Philadelphia has been the limited options for local sports.

For years, Comcast had a chokehold on local professional sports fans through its control of the regional sports network — then called CSN — by withholding it from satellite rivals through a so-called terrestrial loophole. DirecTV and Dish called Comcast’s action an unfair competitive advantage in the battle for pay-TV customers. That’s because if Sixers, Flyers, or Phillies fans wanted to watch most of their games, they had to subscribe to Comcast.

Comcast’s grip on local sports weakened with the rise of Verizon’s FiOS TV service — which carried CSN — and eroded more when the Federal Communications Commission closed the terrestrial loophole in 2010. Comcast also agreed to make its programming available to online streamers as part of its regulatory concessions for approval of its deal to buy NBCUniversal in 2011.

Still, the major satellite TV providers, Dish and DirecTV, don’t carry NBC Sports Philadelphia as they have been unable to reach an agreement with Comcast over carriage fees.

An antenna will get you most Philadelphia Eagles games on FOX, CBS, and NBC over the air for free. But an antenna won’t capture NBC Sports Philadelphia, home of the rest of the city’s professional teams.

The market leader in live TV streaming, Dish’s Sling TV, doesn’t include NBC Sports Philadelphia in its lineup, either. Sling TV happens to be among the cheapest streaming options, with plans starting at $25.

Starting prices for streaming plans with NBC Sports Philadelphia cost $40 a month on YouTube TV, $45 a month on fuboTV and Hulu + Live TV, and $50 a month on PlayStation Vue.

Still, you can’t completely cut ties with Comcast or Verizon if you go with one of the streaming options. A broadband internet connection is still required.

A person living alone needs download speeds of at least 25 mbps to stream shows, while a family can get by with 50 mbps, Willcox said. 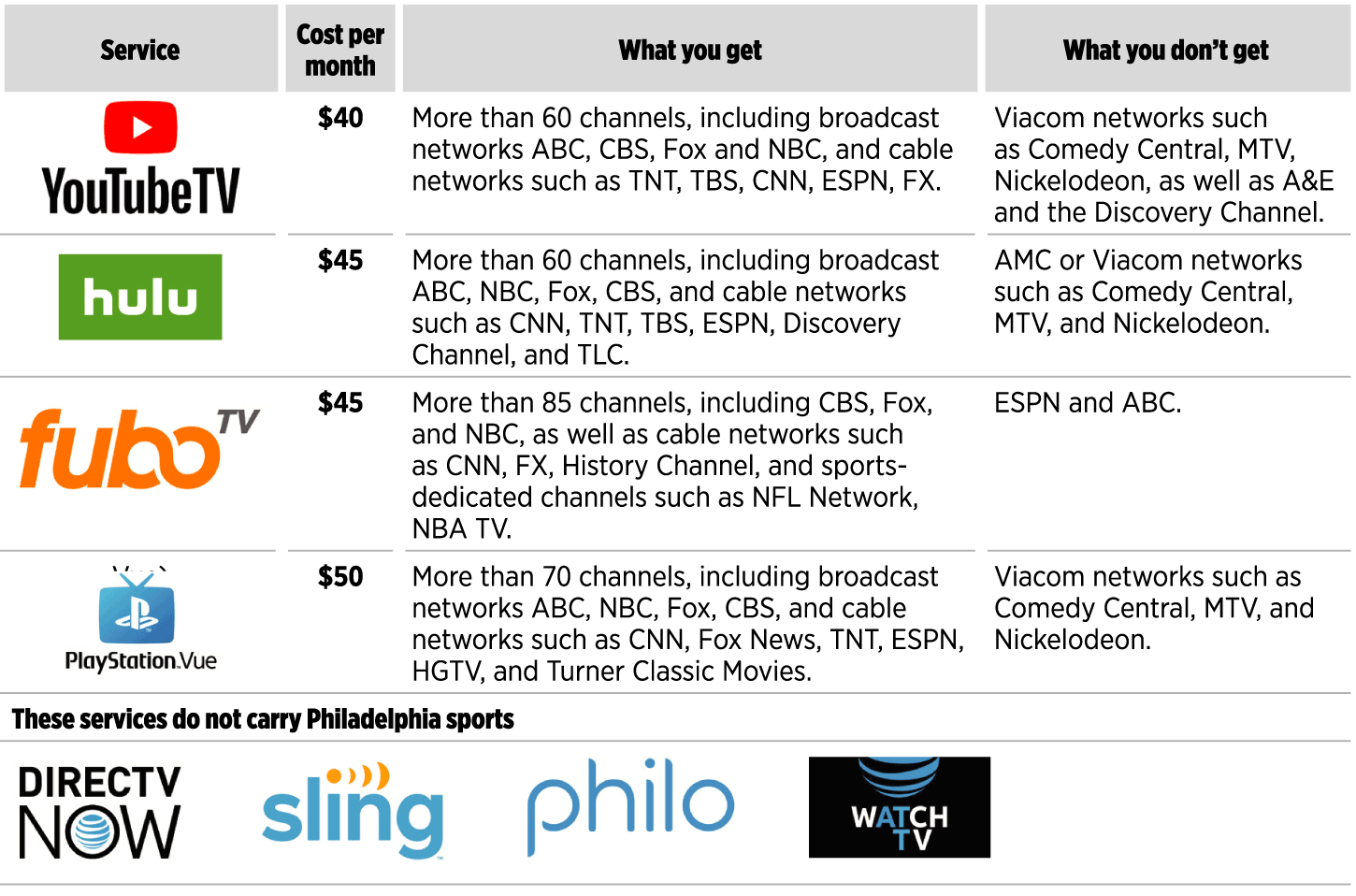 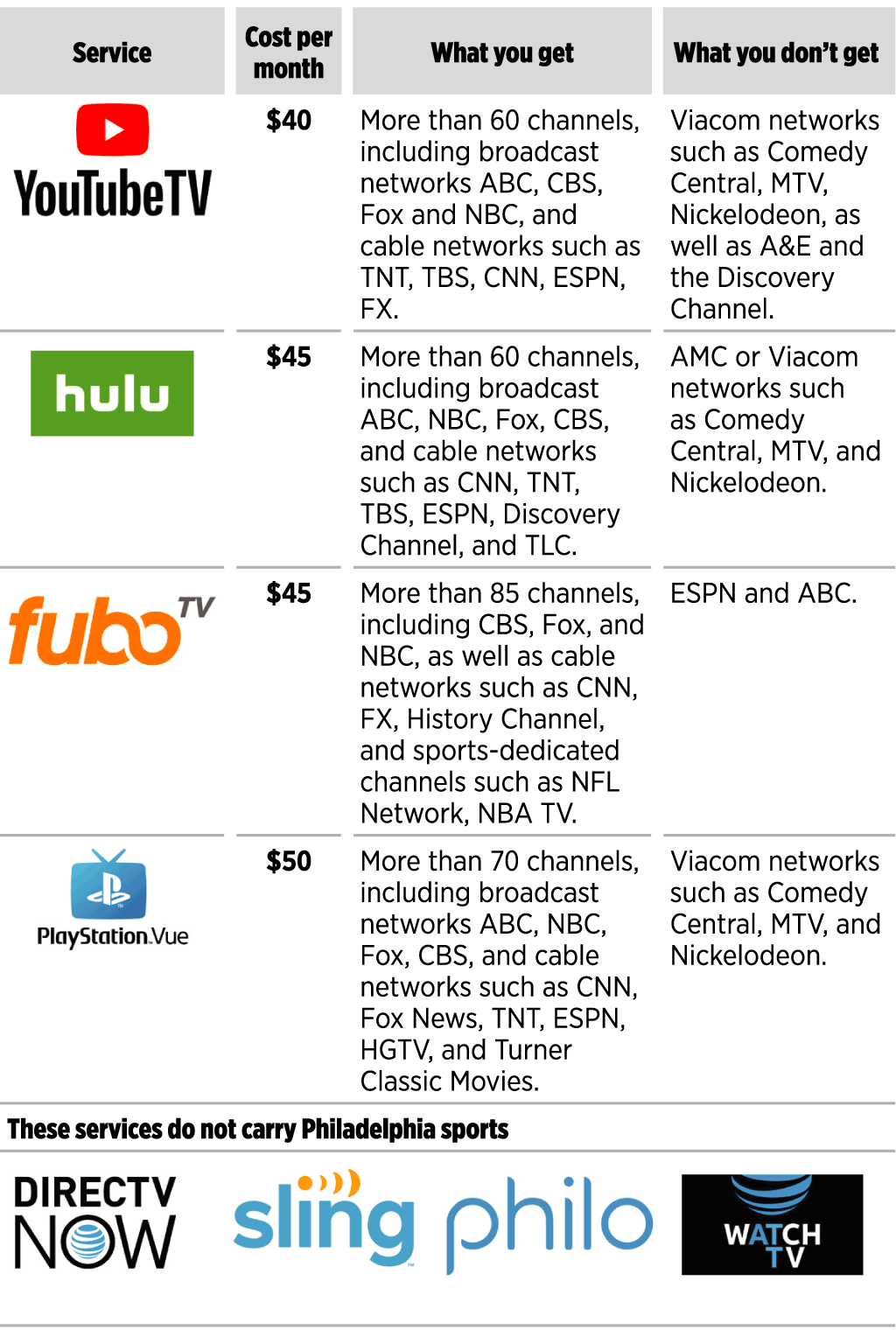 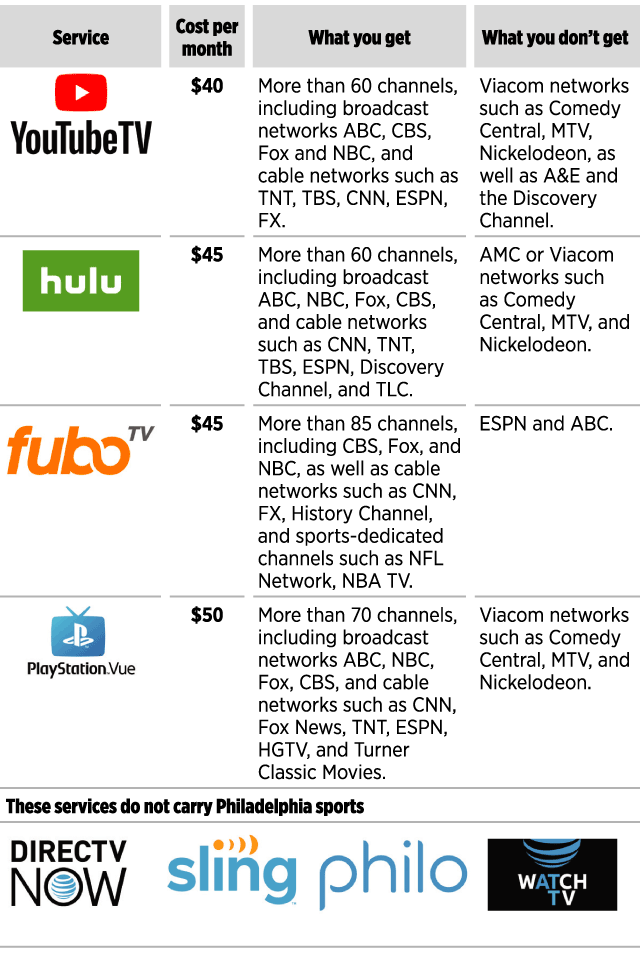 With that in mind, the Inquirer paired Internet-only plans with streaming services that carry Philly sports, and compared that to the cost of cable and broadband bundles in Philadelphia from Comcast and Verizon, including fees and excluding temporary discounts. The comparisons showed that consumers can save hundreds of dollars a year and still watch Philly sports by cutting cable — if they’re willing to lose other popular channels.

The cheapest option was pairing FiOS 100/100 mbps broadband with a $40 YouTube TV plan carrying 66 channels. That combination cost $106.99 a month, including a $12 router rental fee, according to figures from a Verizon spokesperson. Verizon did not provide a rate card for its services after repeated requests.

By contrast, a Verizon Double Play plan with 155 channels and faster 940/880 mbps broadband speeds would cost roughly $148.86 in Philadelphia after temporary discounts end, according to the Verizon spokesperson.

Comcast customers could also save by cutting cable. For example, an Xfinity Performance broadband plan providing download speeds of 60/5 mbps, along with a YouTube TV plan, cost $127.95, including the modem rental fee. (Consumers can avoid the rental fee by buying their own modem, but it may not be compatible with other providers.)

Compare that to an Xfinity Standard Double Play, which has 125 TV channels and faster broadband speeds of 150/5 mbps, and costs $149.18 after an introductory offer expires.

While the streaming services generally include DVR and dozens of local, entertainment, news, and sports channels, some notable programming is missing.

Of note to sports fans, fuboTV doesn’t carry ESPN or 6ABC. Hulu + Live TV doesn’t include AMC or Viacom networks such as Comedy Central, MTV, and Nickelodeon. YouTube TV is also without Viacom’s programming, as well as A&E and the Discovery Channel. PlayStation Vue is missing Viacom’s channels, too.

“They are largely paying to carry networks you’d typically get from a pay TV service, plus the rights to stream local broadcasts,” said Willcox, of Consumer Reports. “These are largely underwritten as experiments as these companies try and figure out the best business models and appropriate pricing, so they don’t have to be big profit generators for now.”

The online streaming services have signed up millions of subscribers as consumers flee traditional pay TV. A nationwide survey of 1,152 households by Leichtman Research Group found that 78 percent of households subscribe to a pay-TV service, down from 86 percent in 2013. The average TV bill was $107, the survey found.

Investment bank UBS has predicted that 24 million people will subscribe to online streaming services by 2022, equating to 25 percent of the market.

Christian Hetrick
I cover consumer issues, Comcast, and how Philly could emerge from decades of struggle and adapt to a changing economy through our Future of Work project.