Under Penn, Jefferson’s shadow, can Temple Health, a de facto public hospital, ever catch a break?

The health system is in the unenviable position of being the de facto public hospital for a large section of the poorest large city in the country. Opened in 1892, it is a major economic anchor in a deeply impoverished area of the city that is home to more than 400,000.

Two years ago, officials at Temple University Health System were concerned that there might not be enough cash on hand to fund operations for the number of days required by its bondholders.

Management secured a $15 million line of credit, just in case. The health system turned out not to need it, but the episode jolted its owner into a renewed search for long-term financial sustainability.

“Over many years the university has been looking at this, looking essentially at the sustainability of our health-care enterprise,” said Richard Englert, president of Temple University, which owns the health system. “We have to get ahead of the curve.”

The health system, anchored by Temple University Hospital, is in the unenviable position of being the de facto public hospital for a large section of the poorest large city in the country. Opened in 1892, it is a major economic anchor in a deeply impoverished area of the city that is home to more than 400,000. The entire health system employs 9,800.

“The other part of the bad luck is they are in the same city as Penn Medicine,” hospital finance expert Joshua Nemzoff said. Stiff competition from well-funded, fast-growing health systems such as the University of Pennsylvania Health System, Jefferson Health, and others makes it hard to draw patients to North Philadelphia, he said.

The persistent financial challenges have led Temple to consider selling the system’s most profitable arm — Fox Chase Cancer Center -- to raise money for the struggling parts of its operations. That would be a U-turn for the system’s CEO, Larry Kaiser, who bought it seven years ago as part of his strategy to expand into more profitable services.

The latest attempt at restructuring is a response to chronically weak financial health — caused by an extremely high percentage of patients covered by Medicaid, a poor payer compared with commercial insurance. It’s the tens of millions of dollars in supplemental state funding that has kept the system from going under.

So far, Temple University Health System has not been able to benefit from a consolidation wave sweeping across the industry that has hospital systems joining forces to gain economies of scale and diversify their patient mix. Temple has also not been able to participate fully in the accelerating shift of care away from hospitals to outpatient settings.

University president Englert and other Temple officials, including CEO Kaiser and Stuart McLean, the chief restructuring officer from consulting firm Alvarez & Marsal, are still trying to figure out what a financially stable Temple University Health System might look like. Exclusive talks with Thomas Jefferson University over the possible sale of the cancer center represent the biggest move so far.

Some outsiders, however, are taking an expansive view of the opportunity presented by a potential reshaping of Temple University Health System. 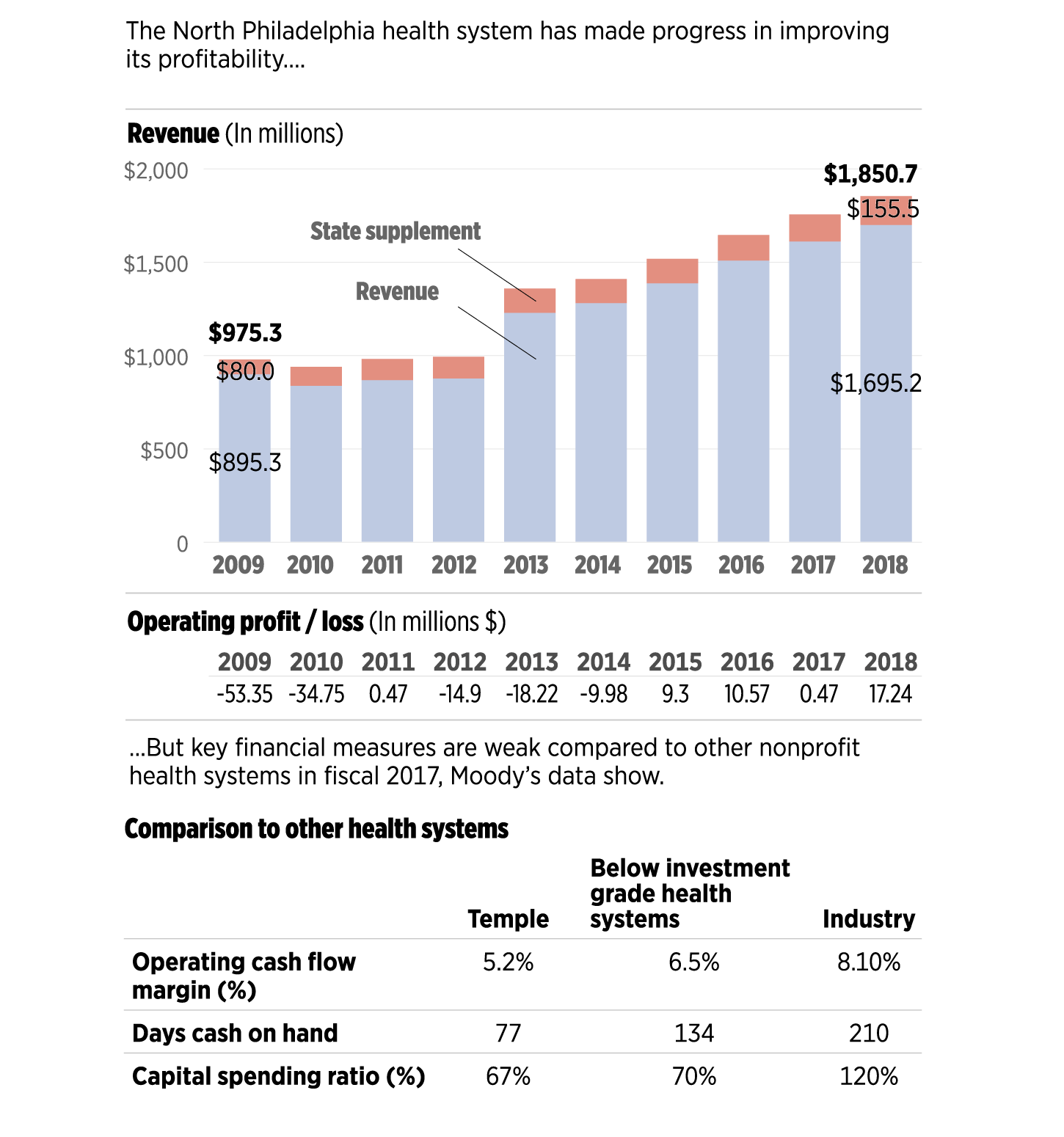 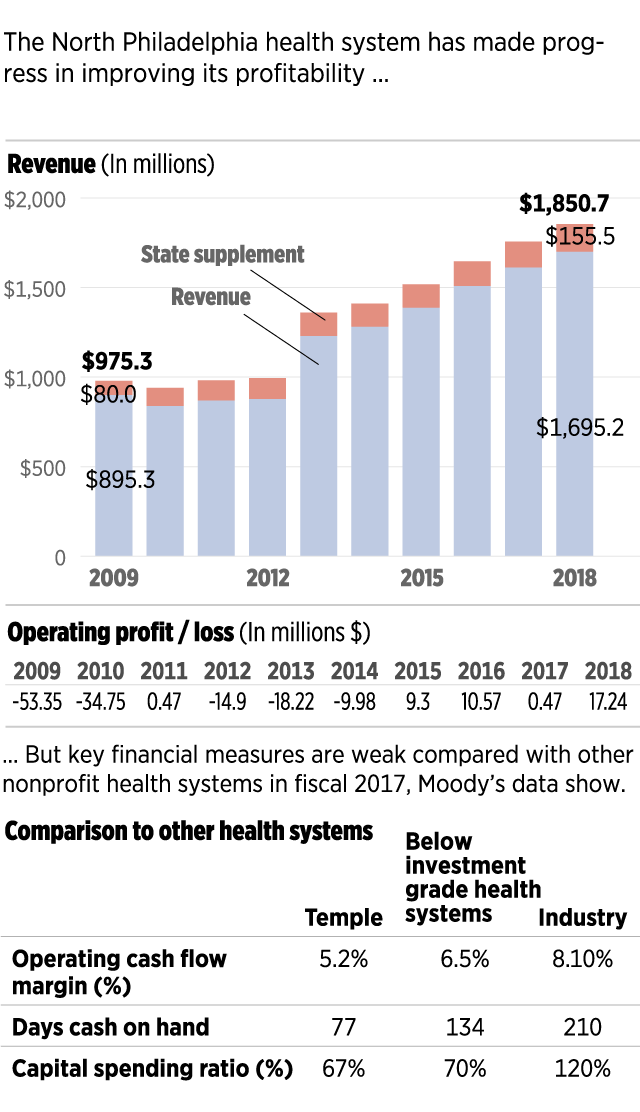 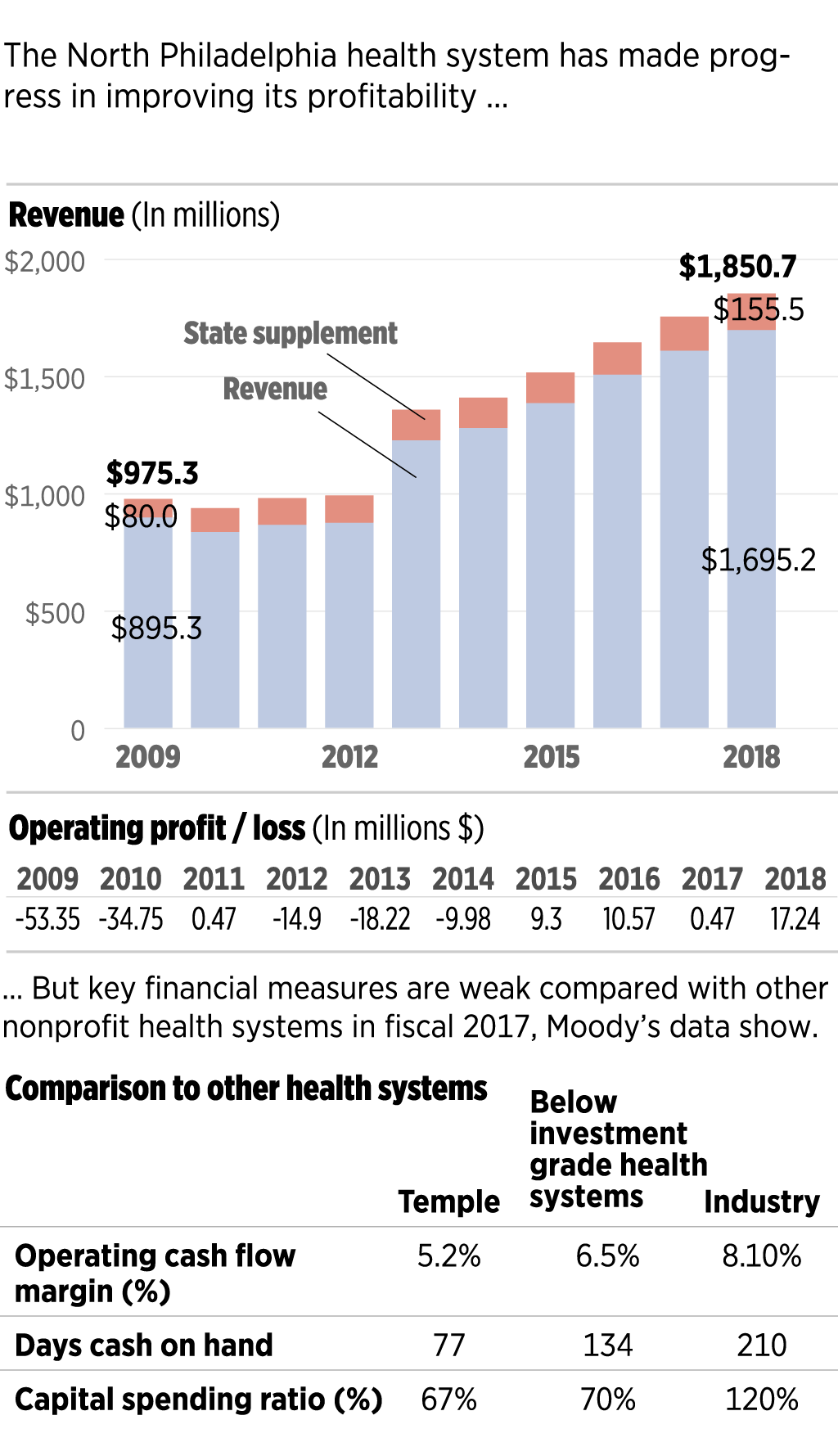 Daniel J. Hilferty, CEO of Independence Health Group, said he envisions a collaboration that could become a national model for improving the health of people in such poverty-stricken areas as North Philadelphia. Such an effort would have to involve Temple, state government, insurers such as Independence, and nonprofits such as Project Home, and encompass behavioral health, housing, and jobs, all of which play a critical role in an individual’s health.

“The math just doesn’t work for Temple to be sustainable without significant change,” said Hilferty, whose company provides health coverage for tens of thousands in Temple’s primary service area through Medicare, Medicaid, and commercial plans.

While Temple’s health system is not facing a financial crisis — as long as Pennsylvania maintains supplemental payments, which have totaled $1.2 billion since 2009 — financial experts said Temple officials are right to be worried about the system’s long-term prospects.

Here’s why Temple has such a hard time financially: Philadelphia is not just the poorest large city in the United States. It is also the nation’s largest city without a public hospital to care for the indigent.

And Temple University Hospital, which accounts for most of the system’s business, sits in the middle of neighborhoods that have an average poverty rate of 38 percent, significantly higher than the city’s overall rate of 26 percent. That combination thrusts the hospital into the role of North Philadelphia’s public hospital, Kaiser said.

Even with the state funding to compensate for the disproportionate share of Medicaid patients, Temple health’s financial metrics are weaker compared with those of 18 other nonprofit health systems with a similar bond rating from Moody’s Investors Service.

For example, Temple typically has enough cash to continue operating without new revenue for 80 to 90 days (it was 77 in fiscal 2017), compared with a median of more than 130 days for other systems with bonds rated at junk level, according to an August report from Moody’s based on fiscal 2017 financial results. The highest-rated systems have nearly a year’s worth of cash.

Nemzoff, who looked at Temple’s latest financial statement, said the system is not facing a financial cliff, but isn’t healthy. With those financials, it can’t invest in ways that help it remain competitive, he said, citing the $1.5 billion University City patient tower that competitor University of Pennsylvania Health System is building.

The political question is whether Pennsylvania will keep giving Temple $150 million a year.

“If it does, they’ll last forever,” said Nemzoff, who advises nonprofit health-care organizations on mergers and acquisitions.

Officials at the Pennsylvania Department of Human Services had not responded to the question — first asked on Feb. 14 — about whether the state would keep increasing its financial support for Temple’s health system. Funding has increased to $155 million in the year ended June 30 from $80 million a decade earlier.

It’s important to remember, said Stuart Fine, a former CEO of a health system in Bucks County and now a professor in Temple’s College of Public Health, that the state “supports Temple Hospital and other such entities as much because of their role as job generators as for reasons related to health care.”

Temple’s current restructuring effort is not its first.

Current CEO Kaiser’s predecessor, Edmond F. Notebaert, was hired in 2008, when the health system was in the middle of a multi-year money-losing streak. Under Notebaert, Temple cut 500 jobs — 8 percent of its workforce — and endured a costly nurses strike in 2010. Kaiser said he is not anticipating layoffs as part of the current restructuring, “but we continue to look at ways of reducing costs.”

Union contracts covering around 2,000 nurses and allied technical workers at Temple University Hospital will expire Sept. 30. Of potential interest to the nurses is how much Temple is paying Alvarez & Marsal and McLean. Temple wouldn’t say.

Kaiser arrived in 2011 with a mandate to end years of operating losses by expanding into more complex services that would draw patients from outside of North Philadelphia. This included the purchase of Fox Chase Cancer Center for $84 million in 2012 and the revival of the organ transplant program.

Kaiser’s strategy had significant success, in 2015 ending a period of annual losses in six of the seven previous years.

But too few patients with commercial insurance came from the suburbs to allow Temple to strengthen its balance sheet, so that it could adequately invest in Fox Chase, for example. From 2011 through 2015, there were gains in patients with higher-paying commercial Blue Cross insurance, but since then those numbers have tumbled.

“It would be great to have Fox Chase in many different parts of the city, where patients could touch Fox Chase easier than just going to Burholme,” the center’s neighborhood, Kaiser said. A second outpatient chemotherapy center, opened in East Norriton in 2017, has increased patient volumes, he said. But Fox Chase remains far short of the breadth of the University of Pennsylvania’s Abramson Cancer Center, which has 10 outpatient chemotherapy locations.

Another of Kaiser’s goals was to get bigger through consolidation.

"Ideally, we should be a $3 billion to $5 billion operation in order to effectively compete,” Kaiser in a 2012 interview, when Temple had about $1 billion in revenue. Revenue totaled $1.85 billion in fiscal 2018, but aside from acquiring Fox Chase, Temple has only watched others find partners.

Aside from improving reimbursement and ensuring that Temple collects every available dollar of state and federal aid, McLean said Temple must devise ways to manage the health of the population, which would reduce expensive, money-losing hospital visits.

McLean said the restructuring should not be understood as a retreat.

“It’s not retrenchment,” he said, “but there is an element of focus on the durable core of what we do, that we really need to understand how that can be sustainable and what we need in order to sustain that, from the government and others.”

Harold Brubaker
I write about the business side of health care and the nonprofit sector.