Snipping an infant’s ‘tongue tie’ can improve breastfeeding. But is the surgery being overused?

On one hand, cutting an infant’s frenulum with a laser or sterile scissors is a minor procedure. On the other, tongue tie is an ill-defined concept with no universally accepted grading system or treatment guidelines.

Like most new mothers, Lisa Treilman really wanted to breastfeed.

But like many women, Treilman had difficulty. After two months, her nipple pain was intense, despite wearing a protective silicone nipple shield while nursing. Each feeding took an hour, yet Treilman often supplemented it with a bottle of pumped milk because daughter Shoshana still seemed hungry.

What happened next is also increasingly common — and part of a medical controversy that Treilman couldn’t have imagined. Shoshana was diagnosed with a tongue tie: The tissue tethering the infant’s tongue to the floor of her mouth was too tight, so she couldn’t properly latch on and suck.

“The procedure took under a minute. She cried for under a minute,” said Treilman, who lives in Fishtown with her husband, Mark, and their daughter, who is now 6 months old. “Until I went through it, I had no idea tongue tie was even a thing.”

Tongue tie, or ankyloglossia, is actually an ancient condition (for a biblical mention, see Mark 7:31-37) that has become a hot international debate in neonatal medicine.

On one hand, cutting an infant’s frenulum with a laser or sterile scissors — a frenotomy — is a minor procedure, done without anesthesia, that very rarely causes any complications. Studies find it facilitates breastfeeding in many cases.

With tongue-tie, an unusually short, thick or tight fold of tissue (lingual frenulum) tethers the tongue to the floor of the mouth, which may cause problems with breastfeeding. A minor surgical procedure, using scissors or a laser, snips the frenulum to make the tongue more mobile. 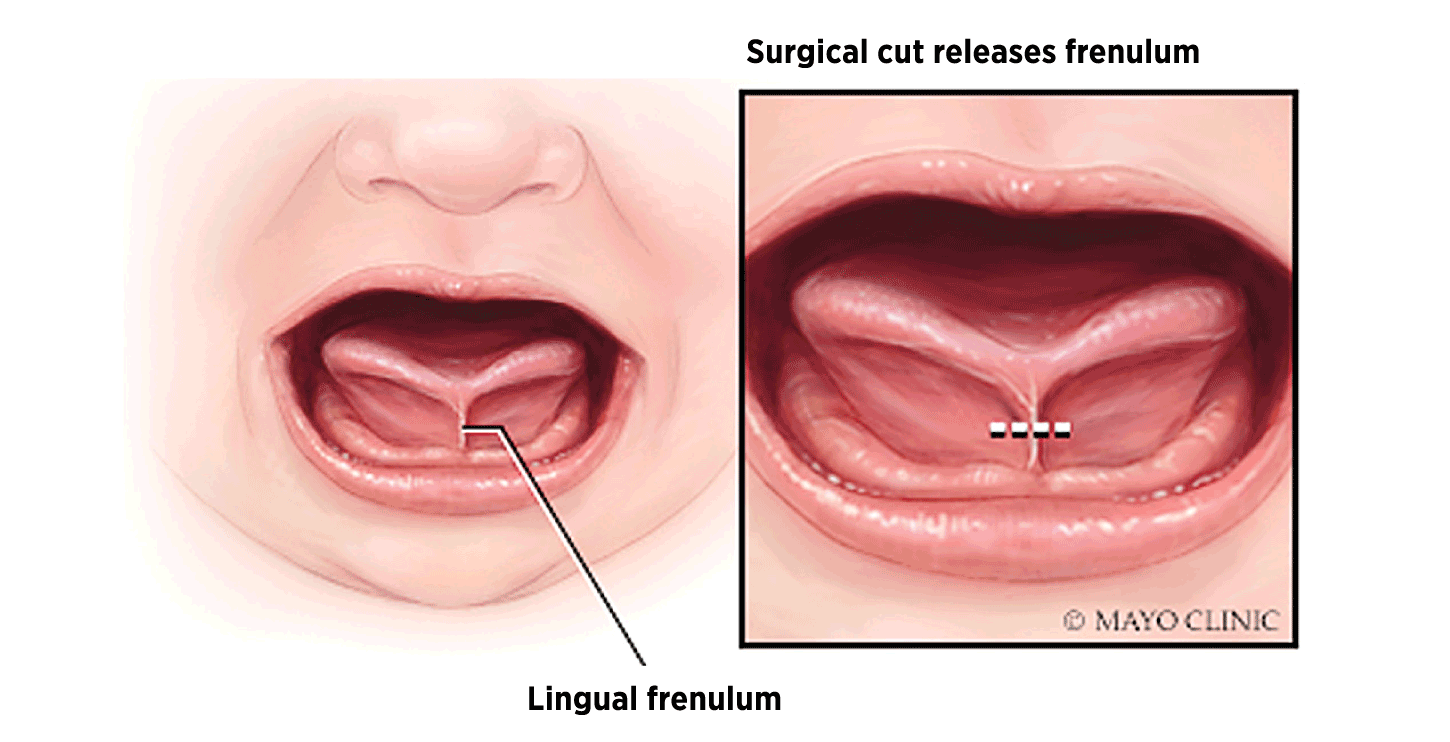 On the other hand, tongue tie is an ill-defined concept with no universally accepted grading system or treatment guidelines. The frenulum may be too tight, or short, or thick. Based on the research, which is mostly of low quality, a tongue tie does not always complicate breastfeeding, releasing it does not always improve breastfeeding, and improvement is sometimes due to wishful thinking — the placebo effect.

Frenotomies are being done by dentists, pediatricians, otolaryngologists (ear-nose-throat doctors) and other specialists. Some say more procedures are needed to spare women and babies from unnecessary frustration and discomfort. Others say too many surgeries are already being done because of the view that it can’t hurt and might help.

Paul Bahn, who treated Shoshana and devotes 40 percent of his Philadelphia pediatric dentistry practice to tongue ties, said, “Unfortunately, I would agree they are probably being overdiagnosed and overtreated.”

An epidemic of tongue ties

Jonathan Walsh, a pediatric otolaryngologist-head and neck surgeon at Johns Hopkins University in Baltimore, quantified the boom in tongue ties by using a national hospital database. Between 1997 and 2012, the number of newborns diagnosed in the hospital with the condition jumped eightfold to nearly 33,000, while the number treated with frenotomy rose almost tenfold to 12,400, according to the study, published in 2017.

That’s just the tip of the tongue tie trend because many babies are diagnosed and treated after going home.

Primarily, experts say, it reflects successful worldwide efforts to convince women that the breast is best. In the U.S., more than 80 percent of mothers start nursing after giving birth, and more than half stick with it for six months, federal data show.

Nipple tenderness is normal when women begin breastfeeding, but as the weeks go on, it should get better, not worse.

Lactation consultants, now a standard part of maternity care, are on the lookout for tongue ties when breastfeeding is a struggle. Today’s moms, meanwhile, are reluctant to resort to the fix of previous generations — switch to a bottle of formula.

“I wanted to push through it,” said Treilman, a health insurance appeals coordinator. “If I needed to stop, I would have. But I just believe it’s healthier for babies and I wanted us to have that experience.”

Like many families, the Treilmans wound up paying out of pocket for the frenotomy.

Medical and dental insurance coverage varies. And parents who turn to a pediatric dentist may not have any dental insurance, or they have it but didn’t think to add their toothless newborn to the policy, or the provider, like Bahn, doesn’t accept insurance for the procedure.

“Altogether, it cost $530 — not a terrible price for something that’s going to improve my breastfeeding experience,” Treilman said.

“Moms are more willing to do anything they can to make that breastfeeding relationship work,“ said Children’s Hospital of Philadelphia (CHOP) otolaryngologist Adva Buzi. She has performed hundreds of scissors frenotomies and only once needed blood-clotting powder to stop an infant’s bleeding.

Buzi added a disclosure. Although she tells parents that the surgery is not guaranteed to help with breastfeeding, it helped her: “My daughter had a tongue tie and [frenotomy] made a huge difference.”

For parents, finding unbiased, unvarnished information can be tough. CHOP’s website, for example, says that when tongue tie is “corrected,” the related breastfeeding problems are “eliminated” — a claim Buzi acknowledged is “too strong.”

Depending on the severity, ankyloglossia can affect speech in later life. But tongue tie support groups that have formed online in recent years may make parents worry that any tie is a bad tie. Even though no studies have followed untreated babies as they grew up, support groups warn that forgoing treatment can cause speech, dental, eating and emotional problems in children, while adults are at risk of all that plus migraine, apnea, and jaws that click.

Adding to the confusion, said Walsh at Hopkins, there is no standard definition of ankyloglossia — no scientific consensus on what constitutes a pathological condition. Tongue tie prevalence estimates vary from 1 to 16 percent of newborns.

In the classic, most obvious type of tie, the frenulum is attached near the tongue tip, so the tongue can’t lift much or stick out. But some years ago, “posterior” and “submucosal” tongue ties — which involve attachments in the middle or back of the tongue — were linked to breastfeeding problems. Even more recently, practitioners have been snipping “lip ties,” the membrane attaching the upper lip to the gum.

“It’s all about patient selection, and we don’t have good selection criteria,” Walsh said. “So you get these camps of believers and non-believers.”

Bahn and other practitioners recommend that parents do stretching exercises to keep the baby’s frenulum from tightening after surgery. The parent is instructed to swipe a finger back and forth under the tongue several times a day for several weeks.

“After the revision of the lip or tongue, the need for active wound care and stretching is mandatory,” Bahn’s website says.

He conceded that advice is based on his experience, not solid research.

In the Canterbury region of New Zealand, doctors, midwives and other neonatal care providers noticed that demand for frenotomies was soaring for no logical reason.

In 2013, 7.5 percent of infants had procedures. Just two years later, the rate jumped to 11.3 percent — more than one in 10 babies. Breastfeeding rates, in contrast, remained unchanged; about 72 percent of women were nursing a month after giving birth.

The remedy — possible because New Zealand has well-coordinated national health care — was as ambitious as it was effective. First, a standardized tongue tie referral and assessment process was developed. Then, a massive educational campaign for health-care providers and the general public was launched.

By mid-2017, the frenotomy rate was down to 3.5 percent, according to the paper published last year in the International Journal of Pediatric Otorhinolaryngology.

“The surgical release of a lingual frenulum is only one of many treatment or support options,” the authors concluded. “Interventions such as adjusting the mother’s positioning and attachment technique may resolve breastfeeding difficulties.”