Christ Church steeple is leaning, and help is on the way to set things straight

A National Endowment for the Humanities grant being announced Thursday will put the historic church near the $3.1 million it needs to stabilize and renovate the steeple and the brick tower on which it sits. A handful of other local groups will receive grants, as well.

The steeple of Christ Church, one of the most familiar features of the Philadelphia landscape for going on three centuries, has developed a pronounced list over time. It now leans 22 inches “toward Trenton,” said the Rev. Tim Safford, rector since 1999, thanks to rotting timbers and unstable load-bearing columns.

“When I walk across the Ben Franklin Bridge, it’s frightening to see,” he said.

That’s not to say that the steeple is likely to topple over onto the Arden Theatre if a major hurricane roars through. But it might.

There’s been worry at the church for some time — about 16 years, actually — that preservation of this historic structure, one of the oldest surviving wooden structures in the nation, needs some serious attention.

A 2003 report from the Keast & Hood engineering firm, addressing “immediate needs of the tower and steeple” of the church, noted some decayed and rotted wood, plus other issues. It concluded that while “emergency repairs” were not required, work “should not be postponed for any significant amount of time.”

The church is now closing in on action, and a grant announcement is scheduled for Thursday at a meeting called by the National Endowment for the Humanities at the church, at Second and Market Streets. Christ Church is slated to receive a $500,000 matching grant.

Church officials said they have raised $2.5 million (including the NEH grant) toward the $3.1 million cost of stabilizing and renovating the steeple and the brick tower on which it sits, and now hope the momentum is there to raise the rest of the funds and begin work as early as next month.

“Ideally, we’d like to start right away, as soon as we can,” said Barbara Hogue, executive director of the Christ Church Preservation Trust. “We think it’s a very expensive, but a very short project.” She estimated that work would last six months.

NEH officials said they were meeting at Christ Church for their grant announcements to highlight $28 million in NEH grants nationwide, including 16 Pennsylvania grants totaling nearly $3 million. (One other Philadelphia organization is scheduled to receive a $500,000 grant: Eastern State Penitentiary, which will put the funds toward a new visitor center. A handful of other Philadelphia beneficiaries are getting grants ranging from $6,000 to $400,000.)

Christ Church, which counted Benjamin Franklin and George Washington among its congregants and is a National Historic Landmark, has occupied the same site since 1695.

In 1727, construction began on the current building, which was essentially an expansion of the original wood church. It’s been subsequently modified and enlarged multiple times.

The steeple was designed by the great carpenter-architect Robert Smith and built from 1751 to 1754. Its appearance is virtually unchanged since completion. In 1908, lightning hit the top spire, igniting a fire, but a thunderstorm broke out and suppressed the flames. The spire, which sits atop an open arched loggia, was destroyed and rebuilt, but the rest of the structure was saved.

From 1754 to 1810, Smith’s steeple, reaching 196 feet into the air, made Christ Church the tallest building in the country.

Without an intervention, today’s list toward Trenton risks getting worse, Safford said.

“I think the real concern is if we don’t stop the lean, it will continue to collapse ... in the lower part of the structure," Safford said during a dusty climb up ladders and sharply winding staircases through the steeple interior this week.

As the lean progresses, Safford said, the weight of the steeple becomes more concentrated on one side, compromising the “structural integrity” of the steeple and the square brick tower that forms its base.

“And then what you have to do is take it down and rebuild it or replace it, and that’s what we don’t want to do,” he said. “This was Robert Smith’s greatest piece of work. It put Philadelphia on the map and it is unbelievably beautiful.”

To passers-by, the steeple clearly needs a major paint job. Paint has peeled from cedar shingles and particularly from the copper cladding that covers the upper portions around the octagonal loggia.

A climb up into the steeple reveals more serious and clearly persistent problems. 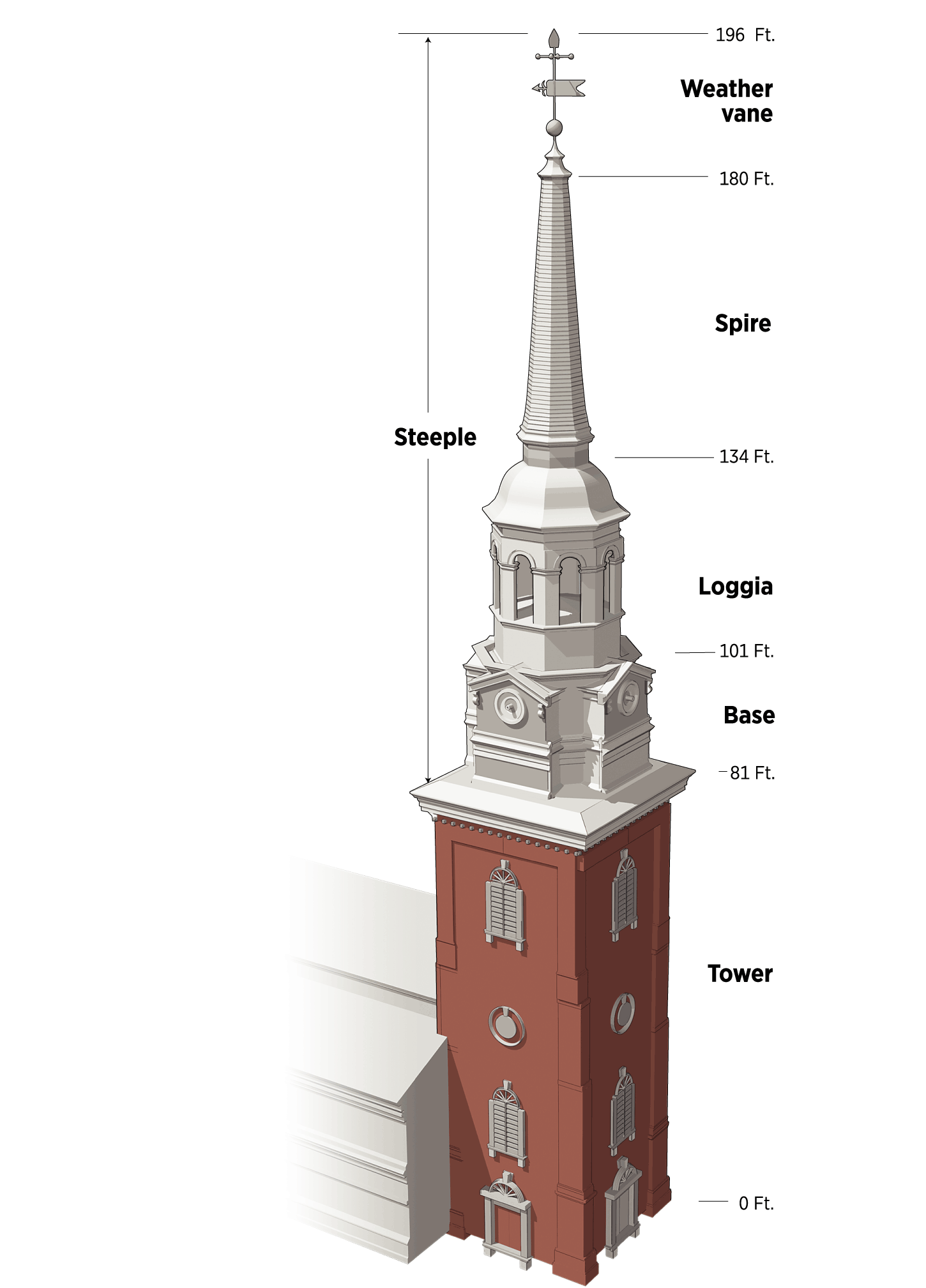 Christ Church’s steeple dates back to 1754, and at 196 ft. high, was the tallest structure in America for more than 50 years after its completion.

The steeple has been reinforced and restored over the years, including repairs made after a lightning strike in 1908 destroyed the spire. The structure has settled over the years, and is now 22 inches out of plumb.

A steel structure was installed in 1986 between the tower and base of the loggia to transfer the weight of the spire directly to the mason ry tower.

Christ Church’s steeple dates back to 1754, and at 196 ft. high, was the tallest structure in America for more than 50 years after its completion.

The steeple has been reinforced and restored over the years, including repairs made after a lightning strike in 1908 destroyed the spire. The structure has settled over the years, and is now 22 inches out of plumb.

A steel structure was installed in 1986 between the tower and base of the loggia to transfer the weight of the spire directly to the mason ry tower.

The way up from the church interior leads across a bannistered walk and up a narrow, sharply winding staircase to the part of the tower housing what Safford called the blowers and sound attenuators for the organ — essentially snaking steel ducts that give the tones of the organ their muscularity and suppress the noise of church HVAC systems.

Up a ship’s ladder to the next level, Safford pointed out the keyboard device that now operates the church bells — all made in 1753 in England’s White Chapel foundry, where the flawed Liberty Bell was cast.

Christ Church’s bells function, but they no longer swing. Keys on the keyboard device, a carillon, activate clappers that strike the stationary bells.

Safford said it was discovered decades ago that swinging bells were destabilizing the entire tower. And, indeed, cracks can be seen in the masonry walls. Metal tabs are in place to monitor crack size, and steel beams crisscross above to form a stabilizing brace.

The bells are located above the carillon level, up a steep ladder.

“You can see where the wood joins the brick tower and the steeple,” Safford said, pointing out the junction. “This is essentially the same craftsmanship and workmanship from the 1750s, including the timber work. This is a kind of rare place where you can also see the more modern conveyances.”

And up above the bells, up a narrow ladderlike staircase, is another room, directly below the open, octagonal loggia.

It is in this room that six massive steel beams will be inserted to support the loggia level and the spire. The room is already filled with a maze of steel bracing, all introduced during past projects to help save Smith’s wooden masterpiece.

The room is full of old wood from past repairs, saved for some unknown future purpose. There are massive timbers eaten away by dry rot and crisscrossed with steel bracing.

The names of workers cover every inch of open wood — “Biddle ... Walker ... Robby ... Hassler" — dozens of names left by workers from many past repair projects, going all the way back, probably, to 1771 when architect Smith was called back to make some repairs and adjustments.

Safford looked around at this heaven of steel and wood, new and old.

“Every generation more steel is put in to try and save this structure,” he said. “This work has been done steadily over and over again.”

The belief is that adding the new steel beams to support columns of the loggia arches — plus some additional steel braces, the removal of any rotted wood beneath the steeple’s copper cladding, and the re-pointing of the entire brick tower — will stabilize the steeple and prevent additional leaning.

“This is the most significant attempt since it burned after the lightning strike in 1908 to make sure it’s stable for at least another hundred years,” Safford said.

The NEH grants for Philadelphia projects:

Stephan Salisbury
I write about the arts, art institutions, and cultural affairs.